Merit Badge profile
Educator-turned-tech-geek, primarily in order to make life easier and safer for people like me with Type 1 diabetes. I’m a lifelong mongoose living by Rikki Tikki Tavi’s code to go and find out. We have a little under half an acre in southern Oregon that was a barren wasteland when we bought it. It’s now full of life and hope and I couldn’t be happier about it.
Medford, Oregon 8a, 21” precipitation. Clay soil.
Apples and Likes
Apples
Total received
31
In last 30 days
0
Total given
0
Likes
Total received
112
Received in last 30 days
2
Total given
89
Given in last 30 days
0
Forums and Threads
Scavenger Hunt

First sewing machine
I adore my old Singers. I have a 128 treadle, a Featherweight, and a 401A. (I also have a bunch of others in various states of reconstruction; as they get restored, they’re going to people in my local community who lost everything in the Almeda wildfires this summer.) The 401 has all the fancy stitches I will ever actually use and it’s easy to use and maintain. The 403 Singers were designed for home ec classes in the 60s—if you can find one, that’s what I’d recommend. Love them.
show more
6 months ago
sewing 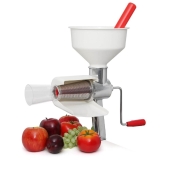 Efficiency tricks for tomato canning
I hate the boiling water/ice bath method of skinning tomatoes; it's messy and too fussy for not enough benefit for my taste. I'm usually making both sauce and diced tomatoes or salsa at the same time, so here's my process:
1. Blend the everloving crap out of cored, trimmed, but unpeeled tomatoes in the Vitamix. (We bought a new one two years ago after my mom's 1963 avocado-green model died.) Start simmering that down for sauce. Can when it's about 2/3 of the original volume.
2. Cut tomatoes in half, lay them cut-side down on a cookie sheet, and broil for 5-7 minutes. Let cool for a few. The skins slip right off. Those also get blended up and added to the sauce. The tomatoes are then either diced (for canning) or tossed in the food processor (for salsa).
3. Collapse in a heap after canning all day.
I've found that I used diced tomatoes more often than sauce, so I do more of the crop in that form. My marinaras and other tomato-based sauces all usually cook for quite some time, so having them cook down a bit more isn't really a problem.
show more
8 months ago
food preservation 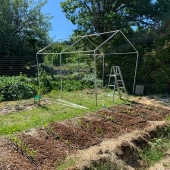 Solar cooling options for rabbit barn
It took some time, but the barn is up, the insulation boards create a ceiling, and the bunnies are in! Took them a couple of days to settle in, but they are starting to be more comfortable and active now. Since it's been so warm here, I put a big box fan in the barn to help with air movement and cooling and stuck a mister that we already had a couple of feet in front of it. Ta da, sorta-kinda swamp cooler. The temps have been lower in the barn than outside, so it's a step in the right direction.
show more
9 months ago
rabbits

adding pockets to pants?
Thanks for this, Pearl! Since my phone and a small additional electronic piece form a part of my pancreas, it's super important that I have pockets. I've been adding patch pockets to some clothing, but it's not always a good match for all clothing styles. This will help immensely, and now I don't have to figure it out for myself!
show more
9 months ago
sewing

Post your flowers!!! Native or non-native :D
I love the unexpected beauty of some of these, like tomatillos.
show more
9 months ago
flowers

Weird things cats have done
I was going to post a "this story contains poop" warning, but then I remembered that this is Permies and I've seen very robust threads on humanure, so just gonna tell the story.

I'll start by saying that no cats suffered any permanent damage. Pretty much, everyone turns out fine except me. Our alpha cat, Ducati, has a penchant for eating things he really oughtn't. Years before reusable bags became A Thing, I'd banned plastic grocery store bags from entering the house because Ducati would somehow use his extra cat senses to discover that one was in the house. Within 30 seconds, he'd be there munching on it. It was far easier to avoid the situation than to try to dissuade him; no matter where you hid them, he would find them!

One day I come home from work to find Ducati sitting, uncharacteristically, in the middle of the floor and looking very thoughtful. A Pooh-stuck-in-Rabbit's-hole kind of thoughtful. An I-probably-shouldn't-have-eaten-that thoughtful. I still had my mind wrapped around work, so I figured it was a Cat Thing and moved on about my business.

A few minutes later, there was unhappy yowling. And then a lot of racing noises of both cats Nascaring it down the hardwood floor of the hallway, skidding around corners. And Ducati is still yowling. I step out in the hall and see Ducati running back down the hall, but there's something apparently stuck to him and the kitten is chasing whatever it is that is stuck to him. Yowl is full bore and sounding frantic now, so I grabbed Ducati as he tries to make the corner and get past me. As I swoop him up, the kitten is now jumping up and swatting at whatever it is that's stuck to Ducati.

Correction. Whatever it is that's trailing from Ducati's butt.

Ducati's amazingly calm with any kind of health procedure (pills, trimming his nails, baths, whatever). He's quite trusting and usually just puts up with whatever you're doing, so, fortunately, he stopped yowling once I got hold of him and didn't fight me. Kitten still jumping and swatting at... Oh.

Apparently, Ducati ate some of my yarn. And now there's about six inches of poop-covered yarn, with a nice poop tassel on the end, that he's passed, but he apparently couldn't get the rest out. So I turn him around and start very gently and slowly (because if it's impacted, I want to be able to tell before I'm pulling intestines!) pulling yarn from the wrong end of my cat like he's the world's worst party favor. There's...quite a lot of it. Yards. He's not best pleased with this procedure and starts in again with the weird throaty yowling. And as I'm pulling, the kitten continues to jump up and try to grab it, because kitten. She's determined, she's fast, and in the end she's successful, grabbing a loop of crap-covered yarn. This is where things really went downhill.

I'm still in the hall. Kitten seizes on her excremental prize and starts racing away with it. And I really can't do much because the whole scenario has kind of overwhelmed my senses. Before I know it, she reaches the end of the slack and is now pulling more yarn from Ducati The Feline Yarn Ball at a frightening speed. The last bit releases (thankfully, no impaction or other intestinal damage and he was ok) and now she's blazing around the entire house with about five yards of Satan Brand Fecal Yarn trailing behind her. Ducati, now blessedly yarn-free, wants to know why I'm still holding him and starts the usual efforts that cats make to free themselves of unwanted human clutches. I'm bleeding, the house smells like a catbox, the alpha cat is pissed off, the kitten is now merrily playing with her prize on what was a clean kitchen floor, and there are suspicious brown smears all. over. everything. EVERYTHING.

At that point, my husband walks in the front door with a hearty, "Hi! So, how was the day?"

I don't remember anything after that.
show more
10 months ago
meaningless drivel
Want to move. The neighbours are too nice.
I'm also hugely introverted and completely understand the drain that a lot of unstructured, uninvited small talk can be. We have one rather nosy neighbor down the lane who tends to want to comment on something or other as she drives by if I'm out in shouting distance (we live at the intersection of our lane and the main road, so literally everyone drives past our house all the time). I was working through a huge pile of aged horse manure by the driveway, sifting out rocks. The day was hot and I was sweaty and cranky. She drove up, rolled down her window, and said, "Whatcha doing?" I unthinkinly responded with a literal, "Sifting horse shit."

She hasn't stopped by lately to chat. I wonder why.
show more
10 months ago
meaningless drivel
I like bananas
I love bananas, but I can't eat them by themselves. I can eat them cooked or with dairy, so...bring on the banana splits.

show more
10 months ago
meaningless drivel
About to drown in native plums
Pretty excited—I found a steam canner on Marketplace for about a third of what they go for new. Made the first batch of juice tonight and it’s so gorgeous! It’s a little flat tasting, but it’ll work beautifully as a pectin in with other fruit or concentrated down to a syrup and mixed with a bit of lime. And it was so easy! Hooray!
show more
10 months ago
food preservation

"What would get YOU doing a PEP / SKIP BB?"
I’ve lurked on Permies for years now, but BBs were the catalyst to actually getting me posting. I’m one of those people that’s motivated by structured challenges, so I love the concept. I started with ones that I pretty much already know how to do and then I’m slowly working through others that feel like they’re just a little bit of a stretch for me (Zone of Proximal Development for any of you trained educators out there).

There is no way for me to complete the PEP on 0.44 acres and working full time at a job I love and find important to the world. Many of the BBs  just aren’t applicable and that’s fine. I’d really love, though, to see PEX more fully developed, because that does seem like it might be within my reach—and as I said before, that’s motivating for me to participate in.

The forum structure mean you have to be pretty determined to find and complete badges. The PEP tracker helps, definitely, but I still have to wade through the forums to find instructions, log completion, etc. An app is one way to solve this, though not the only way. If that is chosen, I hereby volunteer to help test it (I do software quality assurance for a living, so I’m pretty familiar with trying to break shit and documenting it).
show more
10 months ago
skills to inherit property