I'm struggling to find answer to something.

Obviously gas stoves can be adapted to use Biogas.

What about gas ovens? I cannot seem to find any examples so I'm guessing not? Not enough Oxygen used perhaps?
show more
1 month ago
biogas
External air from Earth tube and Chimney
Looking for your opinions on 2 topics.

If the primary was external, specifically from a earth tube? Would that help or hinder?

What effect would an chimney fan have? Would it end up sucking the heat out before it goes into the mass?

show more
2 months ago
rocket mass heaters
Internal Walls straw bale and earth bag
I had an idea to use both straw bales and earth bags for an internals on a passive solar house.

Effectively it would be a straw bale (for insulative properties) 'sandwiched' between earthbags (for thermal mass). So a cross section of the walls would be  Earth bad - Straw bale - Earthbag.

Aside from having ridiculously thick walls, are their any good reasons Not to do this?
show more
10 months ago
straw bale house 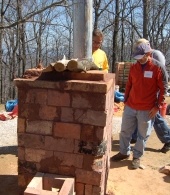 No barrel build
I might be misunderstanding this but...the chamber part of a RMH doesn't need to be an actual barrel right? Could just as easily be made of masonry. Fire brick inner chamber and a normal brick for the 'barrel'? Maybe then covered in cob?

Also, is their some reason why the no build has ever had a 'u' shaped bench rather than the j or l shape they normally are?

steve pailet wrote:if you did a portico it would give you a great place to install your PV panels.  Strong and out of the way so you normally would not have to look at it.. No real reason so stack and pound all those tires to enclose the cars


I like this. Could lead to a outdoor/bbq area perhaps?
show more
11 months ago
earthship

Skandi Rogers wrote:If you have an idea where you want to build it you could talk to the planning department and see if they think it might be possible. You might be able to spin it with some low impact nearly invisible talk.. (the second attempt I think will need another exit, or rather not just one way into the real inside)

Certainly hope I can. The goal of the design would almost no visible part of the house expect the glazed front and the sun tunnels. Hopefult the garage will be straw bale.

Another exit will be ideal. not sure where it would go.

John C Daley wrote:I don't understand the issue of winterizing a vehicle within the housing envelope, it is done a over the world?

Same here. Never seen anything to confirm it causes a problem for living spaces.


S Bengi wrote:Usually every bedroom needs to have a window. So you would have to modify the square compact design a bit.

In the narrow house design, I wasn't too sure where you have the heat pump, air handler, hot water tank, solar batteries/inverters, and washing machine/dryer, possible even the powertools and pantry.

Would the north west bedroom would be the 'guest bedroom'. So not a big issue but maybe a Sun Tunnel to compensate?

Hot water tank, washing machine, dryer and pantry would be the NE room.

Power tools/workshop would be the garage.


Chris Kott wrote:Robert, I am going to bring up something that many Earthship enthusiasts don't like.

Tires are toxic. Fresh tires, used tires, chopped-up bits of tire mulch, compressed blocks of chopped-up tire, you name it, it's going to off gas into the environment with weathering. Granted, if they are properly sealed up in cavities within the ground, safe from sun, water, and air, and there's no air exchange occurring through them, then most of the potential risk is minimized. If one was going this route and wished to be safe, it wouldn't be a big deal to design the HVAC to overpressurise the structure, like with some formaldehyde-based insulations from the seventies, so that off gassing badness gets pushed outside the house envelope. It would also obviate the potential for radon accumulation and poisoning common to earth-connected/underground houses in many areas.

I think without going into your specific soil conditions too much, I think soil-based alternatives might be easier, all things considered. What of an earthbag wall system, or something of a WOFATI hybrid? Alternately, if you don't mind adding anything your soil lacks, you could build your structure exactly as you want it, but using forms much like for cement, but with rammed earth. The only restrictions, apart from ensuring the right clay/sand/portland ratio, is that you need to be able to get a tamper into the form to pack the earth, so the exterior walls need to be thick. Like, if you're using one of those small motorized tampers, maybe about the diameter of a car tire. So nothing changes with your design, except there's a lot less toxic gick going into it from the get-go.


Must admit I'm not married to the idea of tire walls. Im open to any alternatives that will be strong enough to support the earth berm walls AND act as thermal mass.

Hoping this design keeps the house as 'tight' as possible. The rooms and by extension the house, should be no bigger than they need to be. If design works I would want to build 9 of them for a small community. Ah...to dream of a brighter tomorrow

Your opinions on a Earthship floorplan.
I've learnt alot of building regulations in the UK. I honestly don't know how the Earthships in Brighton and Fife even got made. Knowing that one is'nt lived in year round might be telling.

Has anyone got that 'Earthships in Europe' book? Is it worth it? It's alot of money for a PDF.

In the event I could not get planning I came up with plan B. A more 'regular' earth bermed home. Far more compact and would be more 'dome' shaped. Probably got a better chance of getting passed 1st time.
show more
11 months ago
earthship

Jerry McIntire wrote:A dark floor will help, not necessarily black. I don't like black as an interior design color. But if you don't wear shoes in the house you want to think about the floor getting too hot.

A white ceiling is always a brightening idea, but gloss would look strange. I would stay with matte or pearl finish, otherwise it will look like a hospital-- or a kitchen or bathroom, where semi-gloss is usually used (I used to be a painting contractor).

Light shelves help bring light deeper into the house so you can save the skylights or sun tunnels for the places that really need them. Skylights are a big hole in the area that needs the most insulation.

Maybe grey for the floor? Something more like slate?

Skandi Rogers wrote:Before you get all set on the rocket check you are allowed it, remember they are changing and tightening the rules on wood stoves all the time. If you are in a clean air zone you won't be allowed to use it at all! And if you don't have your own wood it is horrendously expensive to buy in the UK

I get the feeling I'll be ice skating uphill with this one a well.
show more
11 months ago
earthship