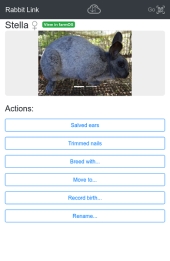 Rabbit Management Software
I use farmOS to keep track of a moderately large rabbitry ~70 rabbits. farmOS doesn't have any rabbit-specific functionality out of the box, but it does have a rock-solid data model for keeping track of animal locations, weights, and various other data - photos, logs, etc.

On top of that I have written a prototype tool I call "Rabbit Link" which is linked to by a QR code on each rabbit cage. The tool helps automate some of the routine data management and works offline as a PWA. The tool wouldn't be trivial to share at this point, but I'm eventually hoping to release it as a contrib module for farmOS and would be happy to collaborate if that's of interest.
show more
2 months ago
rabbits
Dumb/crazy grape propagation idea -- has anyone tried rooting stems/tendrils inside a fruit bunch?
I'm also curious whether this worked out for OP...

Wasps for pest control
I've had really good results with Aphidius colemani (a kind of aphid wasp) for resolving aphid outbreaks on rice plants in indoor growth chambers. Unfortunately, they were a bit too effective and would wipe out the whole aphid population then experience a population crash when the "food" was gone - growth chambers are a bit too small of a system to easily establish a stable equilibrium.
show more
3 months ago
bugs
Refrigerator: harnessing the winter cold

Douglas Alpenstock wrote:
Other options, as you've noted: Some people try to insulate their fridges from the outside.

For others reading this thread and getting ideas, make sure to not insulate the part of the fridge where the heat is supposed to escape. In some cases it may be prohibitively complex to add very much insulation value at all since large parts of the surface may be designed as heat sinks. Fridges work by pumping heat from inside to the outside, but if you insulate around them it will trap that heat and make them inefficient, run all the time, and prone to failure.

It's also worth noting that if the fridge is electric, inside your house, and you're heating that house with electricity, any inefficiencies in the fridge will be in the form of waste heat which would otherwise need to be created by your primary heating system. This means that during the cold months you might not be saving energy by modifying/upgrading your fridge - though your could certainly improve your peace of mind by making it run less if it's noisy.
show more
4 months ago
alternative energy

Sore on my buck’s foot. Need advice/help
Not sure about buying it, but we make poplar salve by by soaking the buds in oil (usually olive) in a warm place like near the wood stove for a couple weeks/months.

Applied topically it seems to help rabbits with healing of all sorts and can be used to treat ear mites also.
show more
4 months ago
rabbits
Any success broadcast seeding brambles?
Some kinds of seeds may actually germinate significantly better if they pass through a bird gut first. Not sure about blackberries, but I might guess they'd be one of those.
show more
4 months ago
berries

Sore on my buck’s foot. Need advice/help
Not to alarm you, but depending on how your rabbitry is protected, it could also be a predator attacking from outside the cage - or even just scaring the rabbit into hurting itself.

If the floor of your cage is rough/wire, a temporary solution can be to give the injured rabbit a board they can sit on. They will poop/pee on it though so it has to be taken out and cleaned/replaced periodically.
show more
4 months ago
rabbits

use a real sounding name - no edge cases please
One interesting nuance to this topic that doesn't seem to be getting much airtime is that "real sounding" is super subjective and (perhaps naively on my part) appears to be mostly influenced by western/colonial roots.

A westerner can jam together a common first name and a slightly less common last name as a pseudonym and be pretty confident that it will fit in with the other "real names" on this forum. However, as an example, I'm guessing quite a few of the top names someone from South Africa might consider normal (ref: https://www.businessinsider.co.za/the-most-popular-names-in-south-africa-right-now-2018-8 ) wouldn't pass that same test. (e.g. "Junior", "Gift", "Prince", "Innocent")

I'm not trying to start a fight here or attack the idea of promoting a certain flavor for this forum, but I do want to point out that it creates a kind of bias and potential inertia against greater multiculturalism if an existing population is dictating whose names do or don't "sound real".

Why should some folks have to be more careful about using their name or choosing pseudonyms from their proximal culture(s) than others? Does that really promote the flavor this forum seeks to cook up?
show more
4 months ago
tinkering with this site
Storing rice and beans in 5 gallon buckets *without* mylar
Some considerations that haven't been mentioned yet; 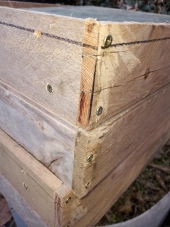 Better joints for my pallet wood cold frames
Depending what you're using the frames for, it may make more sense to put a piece of ~1"x1" material vertically in each corner. Such pieces could be ripped out of the (denailed) structural pallet boards and would probably yield more in terms of strength/rigidity than any joint you could do directly between the ends of the pallet surface boards.
show more
5 months ago
woodworking