Merit Badge profile
I'm worried about the future of humanity on Earth and that has led me to views aligned with many of the permaculture principles.
I live and work in rural Japan and do my best to live a responsible life.
Japan, roughly zone 9b - wet and warm climate
Apples and Likes
Apples
Total received
78
In last 30 days
5
Total given
13
Likes
Total received
514
Received in last 30 days
61
Total given
191
Given in last 30 days
9
Forums and Threads
Scavenger Hunt 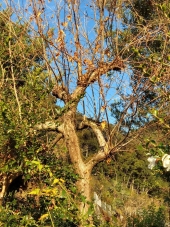 Home garden in Japan
It's been a while since I posted, just a general update covering a few things that are on my mind with respect to the garden.

This time of year is hard for me. With a climate similar to something like South Carolina or even Georgia in the USA it's much warmer and more humid than what I grew up in in the foothills of Appalachian Virginia. It seems like I have to force myself to get out there, lest the powerful force of nature that is wild plant life take over completely.

I seem to have lost most of the transplants that I bought to weed and pest pressure (i.e. neglect). One cucumber seems to have survived and is fruiting now.

The survivors of my neglect from the seeds that I started in my greenhouse a couple months ago have begun going out into one raised bed. I'm mixing a variety of salad lettuce, mizuna, arugula, and volunteer green shiso. I also planted out one tomato plant to borrow the arch support I intended for another cucumber. They need watering once or twice a day in this heat (33C and up), or they start to wilt and suffer. The direct sown lettuce I did last year was much more deeply rooted and didn't care as much about water... but I think I was more active with watering then anyway.

The chayote vines seem to have downy mildew and are hurting badly. That's a first since I've been here, and I wonder if it's just the climate this year or if I really need to catch up on the pruning to get more airflow into the garden.

I have a few more pawpaw fruit this year than last, but still less than 10 I think. They're not really a favorite for any of us, so I don't mind the low yield.

Our grape vine has recovered nicely, but has a bit of black rot knocking off fruit here and there. Steve Thorn suggested I handpick the rotten fruit and dispose of them. Again, they suffer for my neglect... though I hope I'll be able to manage that better next year.

A couple sunflowers I forgot I planted grew nicely. I'm eagerly waiting for the seed head to finish maturing.

A paper wasp nest I'd been watching has a bunch of wasps flittering about it now, hunting in the garden for caterpillars. I catch sight of mantises and geckos eating various bugs here and there too. The ecosystem seems to be thriving well enough. I just need to find room for food crops to grow alongside all the bountiful green nature...

Mosquitoes are no longer a major invader in the house. We discovered their primary entry point was the kitchen ventilation fan, which we netted over and stopped the problem. Hurrah! They're still quite a pest outdoors, but I can live with that. They compete with the horseflies for my least favorite pest. I'm not sure what beneficial impact horseflies have on my garden, but they are mean blood suckers, and if you kill one it's buddies all come to see who the enemy is, and attack, relentlessly. Apparently a female can lay hundreds of eggs in a year... joy. I think I might have whacked that many one summer before I gave into the futility of it.

Where to find Free Lumber
Free lumber around here disappears instantly too... It comes up in ads sometimes, but by the time I get there (not late either...) it's being carted away by other guys with big trucks... Probably they had connections with the contractors...

Maybe your box of donuts to the foreman tip is the trick.
show more
2 days ago
woodworking

Anyone know what this pesty vine is?
The leaf shape definitely suggests morning glory family, but those aren't the bindweed flowers I'm familiar with. It looks more similar to japanese yamaimo, though I don't think that's what it is either. Did you try a plant ID application like google lens?
show more
3 days ago
gardening for beginners
Yakisugi (grilled cedar) 焼き杉 - Charring Wood as a Finishing Modality
Well, first hand I have seen a few buildings and structures with these boards. I can't say how old they are, but they certainly don't weather the same way as raw wood does. Japanese builders use a lot of raw cedar, permies would be happy. It ages and discolors pretty quickly, even if it lasts a long time. The burnt stuff doesn't change...

I don't see charred cedar a whole lot, probably because it's time consuming, energy intensive, and most buildings are made around here with the intention of being rebuilt in 15-20 years anyway.
show more
1 week ago
finishes

I may have drunk the Kool Aid
In any case, please document your results. I know for myself I'm considering some minor outdoor structures using non-treated wood, and have a hard time finding documented results. Lots of "I'm going to do this..." and then maybe enough time hasn't elapsed to post results, or perhaps they worked so perfectly they forgot to post about it.

Would also love to know what kind of soil you're going to put them in, how deep, in a gravel bed or pure dirt, how much rainfall you get, etc...

Cheers and good luck with your fencing!
show more
1 week ago
homestead 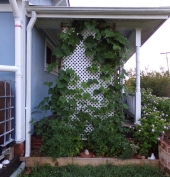 Ideas for Trellis Gardening
I've been experimenting with using arched garden supports from one raised bed's edge to another, and then tying jute string to make a net between them. It's working well for my cucumbers, and creates an arch over my pathways, saving space in the garden bed itself. It's not working as well for my kabocha, they don't seem to like to climb so much, more of a sprawling species.

I really like the arch idea for whatever possible though, it makes finding the harvest ready products much easier.

Sorry, I don't have any pics right now, I haven't been able to get out into my garden much these past few weeks.
show more
1 week ago
gardening for beginners
Can you plant fresh peas/beans? Or do they need to be dried first?
Same as Skandi, I've had peas germinate while still in the pod on the vine. So I'd venture a guess as to yes as long as they are mature enough.
show more
1 week ago
gardening for beginners
How to create a culture of repair, rather than one where we throw things away
Ah, on another note there are some cool things happening within this field around me:

Our library has a "Book Repair Day". You can bring one book and they will repair it, cover it, and finish it as they would a library book.

A museum in a city near by has a "Toy Doctor" event that happens every now and then, you can bring a toy and if it is repairable and parts can be found they will repair one toy for you on the day.

Seeding these ideas, or publicizing them especially through libraries, museums and other public facilities can definitely spread the culture.

Rental workshops, Maker labs, robotics classrooms, and other technology oriented spaces would also be a great place to host similar events. The more makers and repairers and tinkerers get people excited, the more people will get on the bandwagon.
show more
2 weeks ago
repair
How to create a culture of repair, rather than one where we throw things away
I try to be a driver of repair culture... but it is hard, and disheartening. Even reasonably priced goods these days are largely built out of plastic.

We have a little globe that lights up in the dark and shows constellations. Part of the plastic in the base snapped. I was sure it was finished, but after taking it apart and finding some hardware small enough I managed to get it together again.

What I learned from fixing it is: Things are made with marketability as the foremost priority. That means cheap and good looking. That means plastic and weak.

I think when we go to buy things with longevity in mind, our priority needs to be look at the materials used and see if you can find the screws holding it together.

Even type of plastic matters a lot. Some plastics will adhere readily to glues and epoxies, and some just melt or will not.

Another thing I've learned is that people get put off from repairs when their repairs fail. And they often fail because they used cheap repair materials - inappropriate glues, tapes, and hardware. Learning about materials is core to all of this.
show more
2 weeks ago
repair 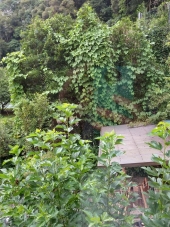 Plenty of Perennials in Japan
Chayote vines are very productive. I got over 50 squashes from these last year.
show more
3 weeks ago
perennial vegetables