Pacific North West winter mob grazing
Julia -  I posted the link with your question on a couple of my FB groups. This from Douglas - "Vickie, I'm down just south of Eugene, not nearly as wet as you are. I don't believe you can avoid hay feeding for at least 10 weeks in the winter without 1) having your livestock condition suffer and 2) delaying the spring boom in your pastures. However, if you winter-feed then I believe you can probably max up your livestock numbers. By way of example, if you have 100 acres and won't winter feed the herd, then maybe you can only have 30 head (and that may be pushing it). However, if you are willing to take the animals off the pastures for 3 months, then you might be able to graze 70 head. The way I look at it is I probably need about a ton of hay per head (I have slightly smaller cattle) from December 1 to February 28 while I rest all the paddocks. Then I start "sprint-grazing" them through the paddocks in March and April, usually no more than 1 or 2 days on any piece of ground--so each paddock is grazed only 1 or 2 days and rested 25 days. By May I can graze twice as long, and rest for 50+ days. My aim is always to have each paddock rest as long as possible between grazings."

Sorry I loaded in wacky order. And my videos can also make your head spin...

I've actually retired away from the farm - but had to get this "last" thing done. The view is the Cowlitz River, 100 ft cliff.
The finishing could manifest in any way and to whatever degree. Not intended for FT living but vacation to rental to 1-3 month stays, perhaps.
show more
5 years ago
tiny house 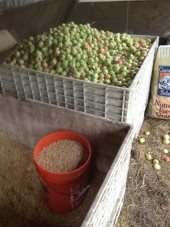 Planting Apples for Pig and Cow forage
Thanks Mountain Krauss. Gonna give it a go

Planting Apples for Pig and Cow forage
Thanks. How did you plant? 4" down, cover and stomp? Did you bother with rodent guard - I'm not so inclined...
show more
6 years ago
trees

Planting Apples for Pig and Cow forage
Has anyone had success planting whole apples? I don't care about varieties, they are just for fodder.

I have half a tote left of gleaned "wild" apples that the cows and pigs loved. I was thinking of planting whole apples in beds on contour.

I was reading about chestnut Direct Seeding - wondering if this would work:
http://acffarms.org/papers/Growing%20Chestnut%20from%20Seed%20-%20Long%20Instructions.pdf

I've also thought of just broadcasting in the wood lot - but I think the cows and pigs have already been "seeding" those for me. But 99% of those I wouldn't find or be able to protect from browsing. The pigs are gone for the fall, so I just need to keep the cows and deer off the beds...

Thanks
show more
6 years ago
trees

Pacific North West winter mob grazing
Hmmm - thanks for that. I have planted annual Crimson Clover in smaller paddocks but never the big rented pasture... I continue to be confounded by the cattle preferring the grasses to the perennial clovers... But maybe just because of abundance during growing seasons, and I'd just not noticed during the Winter grazing... I did not know that the clover(s) did well during the slow months. Thanks again.
show more
7 years ago
cattle

Pacific North West winter mob grazing
Chris and All - I've been very inspired by the principals of MOB grazing, in particular Winter MOB grazing. I've been working on it for several years now - on and off. IE - I've become discouraged and fallen off the wagon, so-to-speak. Right now I'm looking at another gorgeous 11 acres of forage, already grazed once, and currently almost as tall and thick as all the neighboring hay that's just been baled. I'm trying to decide if I should stock-pile it now, try to MOB graze it Super FAST and then stockpile, utilizing September/October growth. Actually, I don't have enough animals to graze it fast enough, I suppose I could buy or borrow some... But to the question:

I've gleaned as much how-to knowledge as I can - books, videos, DVDs, classes - but still struggle with the application in the Pacific N.W. I actually went so far as spending the bucks to attend Greg Judy's May 2013 pasture class. That was a HUGE deal for me, never having spent anything like that kind of money {except buying hay, paying for pasture, buying animals, fencing, etc., the hard money we assume we must spend on farming}.

I enjoyed most of the class terrifically. Still, when I asked "What about 'nutrient washing in the NW?" Greg responded, to the affect, "Haven't the deer and elk been surviving for thousands of years?" The answer is of course but those are also browsing animals and free ranging animals. I understand with mob grazing we are trying to mimic natures' great herds...

The alleged issue in the P.N.W. is nutrient washing. I've been to more than one WSU Extension class where they state emphatically that Winter Grazing DOES NOT WORK HERE. I understand they are generally coming from a conventional farming point of view - but is their science valid? That you'd have a better chance on the plains under 6" of snow than in the P.N.W rain. That somehow all the nutrients of the stockpiled forage have been washed away. I know up here they talk specifically about selenium. Assuming for a second that's true for selenium, what about the rest of the nutritional value?

When I brought this up at a WA Small Farm Extension class, they again said, can't do it. And gave the snow vs rain example. I said, but I'm doing it (my first "successful" year). He asked, How do your animals look? THAT simple and obvious question caught me off guard. I had to admit, my beef were OK, my Jerseys or JerseyXs were skinny. He said, of course, they are less efficient at feed conversion....

Anyway, so here I sit with all this great information but stumble in my confidence and implementation. Will WINTER mob grazing work in the P.N.W.?

I'd be very interested in Chris' comments and others trying to Winter mob graze in the P.N.W. specifically, or Winter Mob grazing generally.

MAY - status just before and then after {last photos} first grazing -

show more
7 years ago
cattle
grass goes toxic, kills cattle
.... pigs and cows prefer to eat corn grown in a field where the green manure is allowed to set seed, dry, and die off on its own. At least according to the animals, this produces a better balance of organic soil nutrition, and more flavorful produce.

Exactly - If you have and hour or so - the MOB grazing - method - totally different from our original "new" concepts of rotational grazing, strip grazing - Greg Judy does a nice job covering the issues:

"Unfortunately in many cases of grass tetany, symptoms are not noted and the only evidence is a
dead cow."
show more
8 years ago
cattle
grass goes toxic, kills cattle
More likely it's grass tetany. Too much Spring Fresh and High Protein grasses and clovers. The key is dry hay or High Mag with Cooper licks to mitigate. They say the first sign of Grass Tetany is death, harsh but apparently true. Sounds exactly like the symptoms listed in the article. If you watch/listen to Greg Judy's video again, listen carefully and he says with stock piled grasses - WITH OLD DEAD GRASS (aka Hay) included in the stock piled pastures - there is no issue with all the fresh green also growing up in it - because when they Mob it - they eat everything - including the dead grasses - and his words ... "we don't have to feed hay..." ie - to protect against grass tetany.
show more
8 years ago
cattle