THRIVE: What On Earth Will It Take?
I wish Paul had taken a different position with reviewing the movie—I would not call it a film—in his podcast or not review it at all. Of course, there are talking points, but Thrive is fundamentally flawed in its—for some, hypnotically—promoting a wide variety of conspiracy theories based on an illusory division between well-meaning but victimized majority of "us" and evil, greedy, powerful minority of 'them' while distracting and absolving from the troubling truth that the real source of the problem is in all of US. If we truly root for permaculture we need sanity, humility and diligence to change little by little the tiny worlds around us and make an effort to live sustainably while providing example and guidance for each other. Thrive is visual and ideological kitsch with unicorns and rainbows on our side and black-suited, menacing thugs in ski-masks on "theirs"; appealing to open minds is the means of snake-oil peddlers and threateningly demanding for it is that of paranoids. Sure, give me a free energy generator, and I, with the rest of the free market, will embrace it—I think that it is hogwash along with the aliens. I would be much more in the company of the toned down but deep humanity of Stephen Hawking of TED than that of the directionless grand utopian vision—and global warming denial—of Foster (Procter &) Gamble of Thrive. I am sure that Mr. Gamble in his open-collar custom shirts considers the total vacuum of critical response to his movie and "movement" as the orchestrated suppression of his mission by the media controlled by "thugs" with white ties and pocket squares on the top of the corporate pyramids and not because they are patently infantile, not worthy of other consideration but for a post in the aptly named forum.
show more
10 years ago
meaningless drivel 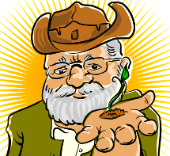 show more
10 years ago
tinkering with this site

Share what you know about honey locust (Gleditsia triacanthos)


I am curious what Geoff Lawton would say about the likely effect of Honey locust on soil nitrogen enrichment that is not by nitrogen fixing of rhizobial nodules but by another possible association with another non-nodule forming diazatrophic bacterium—Bill Mollison had his reasons to plant hordes of Hony locust.
show more
10 years ago
woodland

we're back
What about the ability to edit previous posts (typos, adding file attachments)?

The Search seems to be totally wonky; also, why not to have a simple and advanced option?
show more
10 years ago
tinkering with this site
permaculture: historical & anthropological angles
The post was lost in the transition so I will restart the topic and re-upload the articles.

I wasL lstening to Toby Hemenway's lecture from YouTube "How Permaculture can save Humanity and Earht but not Civilization" and got interested in his recommendation about Marshall Sahlins's The Original Affluent Society and it made me think about the origins of permaculture.

The other thread of our shared origin referenced by Bill Mollison is the role of warfare in the Neolithic Transformation—the mode of subsistence shifting during the transition from hunter-gatherer to agricultural society.
show more
10 years ago
permaculture

we're back
Holy moose! We have a mobil-compatible version of the site!
BUT what is with the new restriction of no .pdf file allowed as a file attachment? How can we post white papers and such??
show more
10 years ago
tinkering with this site


just to clarify: the roots from Greek
syn - with
bios- life
[bis - twice]

As words are created the roots undergo transformations (the 'n' morphs into 'm' and the 's' from bios omitted.)
show more
10 years ago
permaculture

we're back
I had reset my password three times but the red warning text is still on the top of the page.
My new thread (topic) from yesterday is gone and I cannot modify my previous posts. The former is probably just part of the switch but the latter is an omission of the new feature set.
show more
10 years ago
tinkering with this site
Mulberry pollarding

Thanks!
Right: I was searching for pollarding...
show more
10 years ago
plants
Mulberry pollarding
'Cut off a branch of one of the mulberry trees (likely Morus alba) crossing into the cwown of a neighboring swamp-oak and just placed into a whole on a sunny spot this Summer. The leaves were gone in a week but the branches are now full of dormant buds, so it probably took.

Now, the other mulberries are quite tall in their competitive reaching up for light and mostly feeding the birds— still some good crop of ripe fallen berries. BUT I was thinking about pollarding this new tree once it is established for a year or two, so that we have berries within reach. Any suggestions/experience with this?
show more
10 years ago
plants