your favorite song
Hayseed Dixie looks like a fun group; but They Might be Giants are awesome & we love them! Somewhere I have a copy of "Birdhouse in your Soul" on cassette. I think it's really appropriate that they've gone on to do kid friendly music as well.

When dh discovered this little number, he listened to it every day for weeks. Still loves it!

I listen to a lot different kinds of music. Up until recently, had pretty much avoided rap. Then I discovered Flight of the Conchords. Their "rap" I can dig. I know I've mentioned them before.

My husband has written & recorded music/lyrics himself. I don't have anything that he's done in a post-able form. He'd probably kill me if I did post something. He doesn't fancy himself to be much of a singer (he is really self critical!).

About the only kind of music I don't care much for is mainstream country. Nothing gets me outta the Dollar Store (or any store!) when they have that stuff blaring on the radio! However, I do have respect for some older country music/performers, but it's nothing I seek out. Dh has less tolerance for it than I do, but he works in construction and has it shoved down his throat every day. We are both big fans of western swing styled music though. Absolutely love "Riders in the Sky" (on myspace, they have nothing on youtube, also have a website) http://www.myspace.com/ridersinthesky

and "Asleep at the Wheel". http://www.youtube.com/watch?v=r9KVuLRRnUI

Ray Benson IS Asleep at the Wheel. He is a fantastic performer with a great voice. We've seen him/them and Riders in the Sky live. They are top notch entertainment!

If you like slide guitar, a friend of ours is a pioneer of the double slide method of playing.
His name is Brian Cober, he's from Toronto. http://www.youtube.com/watch?v=bAkcpALueZM
He's mentioned in this wikipedia article, near the bottom. http://en.wikipedia.org/wiki/Slide_guitar
show more
12 years ago
meaningless drivel

Hey Charles, check out the Beatnix! Interesting take on Stairway to Heaven. I love this! Always makes me smile.

Oh my! Dh reminded me of this:

Which of course led to this:

Ok, I'll stop now. (But if you're bored, search youtube for "Punk Rock Girl" if you've never seen it. It's great too!
show more
12 years ago
meaningless drivel

what is the best flooring for barns

Leah Sattler wrote:
argh! the sound of a shod horse skidding on barn flooring and going down. shudder.

Oh, shudder is right & you just have to see that one time for it to impact you the rest of your life!

Positive energy generator
Jennifer, there is a pic of Leah's baby here: 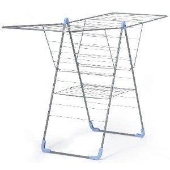 hang your laundry to dry outside in the winter
Absolutely; we learn as we go! I always appreciate tips on "making do" with what I have (or might have). Keep those tips coming! Thanks, Pat!
show more
12 years ago
homestead

hang your laundry to dry outside in the winter
Good idea about the chairs. My dining room chairs have wheels (no carpeting on floor, chairs roll easily) and I have 5 cats. There's a chuckle in me just visualizing that fracas! Cats getting hung up in the mattress pad, freaking out trying to run, chairs rolling, fur flying. Oh my!

I'm bringing the mattress pad in when it gets dark. If still damp, I'll hang it in the garage, I have a clothesline out there. I usually don't even bother to wash this thing unless the weather allows...but our weather is just hopeless these days!

show more
12 years ago
homestead
quick tutorial on how to be patronizing and obnoxious
Your little one is ONE FANTASTIC KID!!! Maybe I'm a little biased, but so what!?
Her powers of perception have never ceased to amaze me!

hang your laundry to dry outside in the winter
This mattress pad is super thick and king size. I would love to have it hanging in the house where I could make use of the humidity it's giving off. It would dry faster too. My shower/tub area is really small and holds the humidity for a long time after we shower, so I didn't think putting it in there was worth the bother. Was also afraid the weight of it would pull down the shower rod. It's one of those spring loaded ones, not permanently mounted to the wall. I've had it outside for a few hours now. On a sunny day, it would be totally dry by now, I will say that I'm surprised it's drying at all, but it actually is. Very slowly.
show more
12 years ago
homestead

hang your laundry to dry outside in the winter
Ok, I had to wash a mattress pad today & it can't be dried in the dryer. Sooooo, it's hanging outside. It's 36 degrees and the humidity is 61%. At this rate, I expect it will be dry by...MAY!!!

Well, at least the sun is trying to peek out of the clouds.