Teaching permaculture to kids
Hi Everyone,

I used to post her pretty frequently, but it seems that the more projects I have taken on the less time I have for frequenting my favorite permaculture forums, not just with permies but pretty much across the board.

Anyway, I wanted to stop in and share a cool project that I am working on. The elevator version is, I'm a middle school teacher at a public school in the Detroit metro area, I was given an entirely new class with a pretty open curriculum and decided that I was going to teach the kids permaculture.

To do this I created a project that I titled, "The Settlement Design Project". The context of the project is for the students, ages 11 - 14, to design their own sustainable settlement using permaculture as their design system, and Sketchup to show and share their designs. I've taught this lesson to over 150 students over the past couple of semesters , and have gotten the process pretty streamlined at this point. The students select a location from google Earth, research the area, use Sketchup to create a 3D scale model of their settlement, then turn this model into a video presentation. I've found that it has been very easy to expand or contract the depth of this project and include other subjects based on the students interests and aptitude. Example, adding in a social studies component to research the cultures that have developed in the area they select. Using the scale Sketchup model and doing some math to "prove" how many people their settlement would support based on, available water, food system, energy systems, etc..

After hearing that I must share this from my upteenth permaculture friend I decided to give it a go and record everything to make it available to the people of the internet. But using my old PC for video screen captures and smart phone for recording instruction turned out to be a fail.

So I setup a kickstarter to see if I could raise some funds to get some proper recording equipment, and a computer that will actually be able to handle HQ video files. If this seems like something that you would like to support or share it would be much appreciated. All comments and questions welcome!

Thanks for taking the time to read this,

Bookmarked that one until I have some more time to go through it. Got to love someone who keeps diligent records and posts the data for others to see.
show more
10 years ago
chickens
Rocket Mass Heater Event in Michigan August 17, 18, 19
I would like to come to this also.

Ray Cover wrote: The Game Warden can inspect your freezer and if he finds parts for more deer than you had a filled and checked tag for the previous season you can be fined or worse.

I have heard something similar, but I think they would need just cause for that. Like if they caught you poaching, as in in the act of doing it or with an untagged animal, or someone reported it, even then they would need a warrant. I would think this would be hard to prove as well, for example, I have 3 deer in my freezer one I got, one my roommate got, and one his dad got. They are packaged and not labeled, except what cut it is, so how would one tell what animal they came from? Also how do they know if you filled your tag or not? I have bought far more tags than I have filled, and never had to report a filled tag. I'm not saying what you said is wrong because I have heard the exact same thing, it just seems improbable unless you are doing something illegal, and caught. Even then I think it would be a hard stretch to prove someone poached a deer that's already in the freezer. This of course is just my experience in my state. You are absolutely right about being required to tag any deer that is being transported, road kill or otherwise.

I have a friend who hit a deer with his van. Got out to check the damage and there were 2 dead deer, both had broken necks, but otherwise ok. One was standing directly behind the one he hit and the force of the impact drove one into the other killing both. He called the DNR to get a tag and the officer showed up, looked at the van and gave him 1 tag. He said wait there are 2 of them. The officer didn't believe him that he hit them both and refused to give him a second tag. My friend made a compelling case, they are both still warm and the same temp, if I didn't hit it where did it come from? This was off a very rural road with no other traffic to be seen. Officer shrugged his shoulders and said I'm only giving you one tag, got in his truck and left. My friend is very firm in his belief of using any animal you take the life of, and also an ex-marine and not very comfortable with breaking the law. He deliberated for a few then threw them both in the van, tore the tag in half and tagged them both. Not exactly legal but IMO the right thing to do.

"Whenever an officer appointed by the department has probable cause to believe that any of the statutes or laws mentioned in section 1601 have been or are being violated by any particular person, the officer has the power to search, without warrant, any boat, conveyance, vehicle, automobile, fish box, fish basket, game bag, game coat, or any other receptacle or place, except dwellings or dwelling houses, or within the curtilage of any dwelling house"

So it would appear they can search everywhere except in the dwelling and the immediate area around the dwelling, curtilage.
show more
10 years ago
frugality
Owl Decoys... do they work?
My parents had a problem with seaguls pooping all over their floating raft, well not so much the poop, but the fish bones that would be left and stepped on. My dad got a windsock/sail and hooked to a piece of conduit as a pole from the edge of the raft. The windsock looked like an eagle and worked really well, no seaguls the first year. In the spring of the 2nd year the string broke and the windsock was lost, the seaguls quickly reclaimed the spot. My dad went out and got another one, but this one was some crazy multi colored twisty thing, he replaced the string with some light chain and some fishing tackles and it's on about it's 4th year now. I would say it keeps the seagulls away 90% of the time or better. There seems to be one bird who isn't scared of the wind sock, but does seem to be scared of the BB gun for some reason. Not that my dad or I would ever shoot at a seagul, that's illegal here afterall, but shooting right next to it or as I like to say, "firing a warning shot off his bow" seems to work.
show more
10 years ago
predators 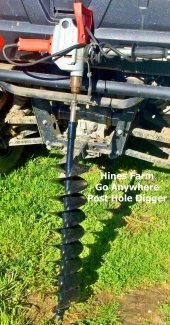 You sure aren't lying about that!!

I used a beefy drill like that to run wire through some joists and the SOB loved to randomly catch and slam my hands into the floor boards. When I was done it looked like I had been in a 15 round bare knuckle boxing match.

I like the ingenuity, it sort of looks like my buddies ice fishing auger but electric.
show more
10 years ago
homestead 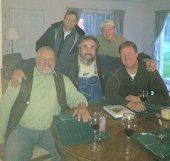 A prepper, a permie, and Sepp Holzer walk into a bar...
.... and then they made a podcast!! Well Paul and Jack did at least, pretty funny listening to it right now.

Broken Glass and Waste Plastics in a Permaculture System

I just got an image of Jean-Claude Van Damme from "Kickboxer" in my head from that. I actually incorporate a little Mauy Thai in my MMA training, mostly low kicks and clinch work, elbows and high kick are too dangerous when your trying not to hurt your sparring partner. It turns out the hand wraps dipped in glass is actually a myth, there a few suggested origins, most of them center around outsiders watching it and not knowing what's going on, but seeing many cuts on the fighters, usually due to elbows. They do however use glass bottles to roll them against their shins, it deadens the nerves in the shin and strengthens the shin bone by causing micro fractures that heal stronger.

And now back to your regularly schedule program..

Didn't go go through all of it, but I like the pics! I really like the archway you made out of logs that's a nice touch.
show more
10 years ago
permaculture 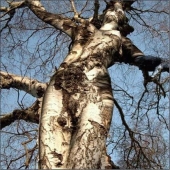 Lady of the woods
Found this on facebook, thought I would share.
show more
10 years ago
meaningless drivel