creating a permaculture method for blueberries where the pH is too high for them
We have alkaline soil with corresponding low sulfur values. Our berries just sat there looking yellow and glum. After a few years of trying various things I added pelletized ag sulfur to the soil as well as boatloads of various mulches such as shredded leaves and shredded pine needles. Afterwards the berries are now growing with gusto.

It is important to note that Blueberries are quite moisture sensitive with most of the roots in the very top of the soil. Add in a sandy soil and you have a problem! So I'd add in as much mulch and humus as possible to remedy that situation.

I have heard that coffee grounds are naturally acid plus they are a good amendment. But adding enough for my 24 bush patch was just too much. Lot's of contradicting info on using shredded pine needles so your milage may vary.


Good luck!
show more
8 years ago
permaculture
Hawthorn & Serviceberry/Shadbush/Saskatoon hedge
In our neck of the woods Native Hawthorne's are the only tree capable of becoming a good barrier that deer can't get through or won't eat their way through. The native saskatoons are too shade sensitive to produce much of a forage. Other tree's are just too tall for a living fence that won't become a shade problem later. I have mixed in black locust and siberian pea shrubs (bee's LOVE both of those) with good success for deer survival.

Note the Hawthorne's we have are extremely thorny. I mean serious hurt your self thorny. Deer love to eat the new growth so they have a poodle look to them trimmed up to about 4'. But deer won't go through them at all.
show more
8 years ago
plants

Here is a nice link on a range of 'seedmeals'.

Cottonseed meal or soybean meal as fertilizer - toxicity?
I want to thank all the posters on this topic. I had decided to NOT use cottonseed meal nor soybean meal in my fertilizing regime. I really wanted some point blank thoughts and ideas and I GOT it thanks to all of you.

One additional point. I was in my local ag feed store and found the carry flax and linseed meal as animal feed. They do NOT carry cotton or soybean meal. Interesting. I'll do some research on this, I can't imagine big Ag nor big Pharma wanting to corner the market on GMO of flax and linseed meal. I'll also research the plant nutritional aspect of those 2 meals compared to the GMO'd soy and cotton seed meals.

Thanks again to everyone!
show more
8 years ago
organic

Cottonseed meal or soybean meal as fertilizer - toxicity?
Good day to everyone! I am reading Steve Solomon's Gardening When It Counts book. His recommended formula for Complete Organic Fertilizer has cottonseed or soybean meal as a key ingredient. I am wondering about the effect of using this product in today's world. These two meals are now pretty much completely GMO'ed for bt. Since the meal will go into the ground accessible by any living creature and bug, does anyone have any ideas, thoughts, research or links to share about the risks to your garden?

I will send him a direct email to see where he stands. I am hoping someone here has experience or is knowledgeable about the chemical process used to create the seedmeal and if that has the effect of eliminating the bt element in the plant.

Doug
show more
8 years ago
organic
Cherry trees are too hard, apparently
This depends on your location. I have grown sweet cherries in Willamette vallley OR USA. They do well there but required spraying with Sulfur for fungus diseases. The area was known for that. I now live near Spokane WA USA, I have no fungal spray issues but our late frosts and ocassional deep freezes in April will either zap the fruiting buds or just outright kill the tree. I have given up on Sweet cherries and just grow the sour ones, resigning my self to strawberries and the stuff brought in from outlying areas. 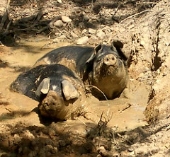 How do I fix a leaking pond?

Benjamin Burchall wrote:So am I understanding correctly that Holzer's pond sealing method is basically to compact the soil that will serve as the bottom of the pond. If that's correct, I imagine a low tech no-pig way to do this would be to take a sledgehammer to the soil. Perhaps lay a small metal plate on the soil and hammer away on top of it? I could see this working on clay soils well.

I've seen work crews working with soil compactors to prepare the ground for building a road or sidewalk before. They look like jackhammers with a metal plate instead of a spike. I suppose you could rent one, right?

I don't think that Holzer's technique as he described it could be summarized as a simple COMPACTION. If you re-watch his description you'll notice that he illustrates the compaction as a shaking instead, using the bucket of the excavator to pound the soil "lightly" so as to allow the clay to sort itself to a single stratified hydrophobic layer.

Yes MillerDavidPatrick McMoy is correct. Holzer's method involves compaction and straitification of soils. Heavy large granules filter downward, fine silty clayey particles rise to the top. Each combo of compaction with stratification results in stabilized layers of soil types. A compactor won't quite have the same effect. If you visit his site you see very very large equipment akin to what in North America is called a track-hoe. Large and heavy. His ponds are also MONDO in size, not some 20x20 foot pond.
show more
9 years ago
ponds

Alcohol Can Be a Gas!
It is a simple process to get a permit allowing for production of alcohol for energy purposes.  The barrier for producing alcohol used as liquor is quite high.

Leah Sattler wrote:
darn. I  found out distilling your own alcohol is illegal. I was really seriously considering brewing my own fuel. pre child days I would be doing it anyway!

as a teenager i worked in a donut shop. it was hard to predict how much to make and we would sometimes have trays upon trays that we had to dump in the TRASH! think about all that SUGAR just waiting to be turned into FUEL for my car. I would just need to work out a deal with a donut shop owner. after lobbying for the legalization of home distillerys of course.

How much do you charge or pay for fresh chicken eggs?
oh wow, I just assumed we should steam squash!  I will do that for the ducks only...let the chickens enjoy the firm texture!
show more
9 years ago
farm income