posted 3 years ago
First off, it took me a long time to muster up the guts to want to post this, mostly due to my self-conscious/self-critical nature, but as you can see, I eventually found the nerve. I also wasn't sure what to title this thread so, I just settled on "Fantasy Garden Sketches". I still don't really feel like this title accurately describes the concept but it's close enough for now. I'm sure I'm not the only one on these forums that creates this type of art. So, if you also do this kind of stuff and are comfortable sharing, please do so! I would love to see your work! As I'm sure a lot of other members would. But the concept is simple: Basically, before most homesteading/permaculture project I undertake, I try to sit down and sketch out what I'm about to do. It helps me process my ideas and evolve them to a more solidified state. It makes the intangible tangible, or at the very least, allows my projects to be founded more in reality and thus more attainable/achievable. Sometimes it will take me weeks or months before I finish a piece and I'll go ahead and get started on my project anyway. Other times, the fantasy sketches remain just that: fantastic rudimentary sketches, usually related to gardening and regenerative agriculture.

Even though my art is not that great and, if I'm honest, a little child-like, I still look back on them fondly. As much as I'd love to think of myself as an artist, I just don't have the skills or if I do, they were never fully developed. If anything, I'm a conceptual artist and a dreamer, and I'm totally fine with that. But the point of all this is to materialize my ideas into reality. It does not matter to me if the plants I'm drawing are real or not. In fact, most of the time they are not, hence the title. But what's more important to me is that the concepts and functions are the same as in real life. For example, I care less about what type of mulch I draw (wood chips, gravel, moon rocks, whatever) and I care much more that the mulch is there doing its job. The same could be said for the various layers and elements that are all there to serve a specific purpose in the greater scheme of things, just like in nature. Plainly put, it's permaculture on paper with a fantasy twist, or at least that's my intention.

Before I started sketching again, after abandoning art for the better part of a decade or so, I would flesh out my ideas using some type of 3D medium. Since I don't have thousands of dollars to shell out on 3D rendering applications, I would normally just use sandbox games like Minecraft or The Sims. They would do a fairly good job too. I would essentially create a scene, or sometimes an entire world, that encapsulated my visions or my dreams. Some of those works would include multiple variations on what I thought my grand-parents property would look like after I took over. Other times my works would be purely fiction, placing myself and my family in all sorts of situations to see how we would fair. It was fun but that's pretty much all it was. These days I'm a little more grounded and much more purposeful with every action I take, art being no exception.

So that is the basic premise. Here are some examples of my work. I hope you enjoy them. Any and all constructive feedback is most welcomed and appreciated! Thank you for indulging me.

Of the more recent sketches I've done, the first was made was back in late 2016. I was completely new to permaculture and I didn't understand it very well. I had watched a number of documentaries by Bill Mollison, Geoff Lawton and Sepp Holzer. I also had many conversations with friends who were farmers, gardeners and even one who was well on his way to building a name for himself in the permaculture community. Suffice is to say that I was intrigued. It wouldn't be long before I was completely addicted, hook, line and sinker. Sketching seemed to be a good way to further develop my ideas and test them to make sure I understood how it all worked before I would even sow my first seed.

Around this time, my wife and I were getting ready to buy our first house, which was the property where my grand-parents had lived for almost 30 years and where we now live. You can read more about this in my bio if you're interested. After taking a few years to thoroughly consider what I wanted to do and many hours spent studying nature and working with it, I felt I was ready. This was the result of my research: 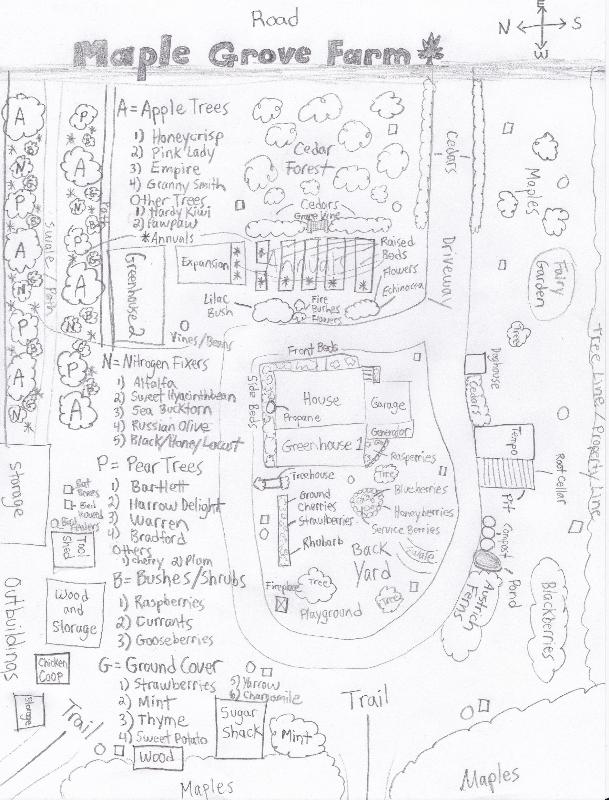 Once the vision of my new home and property began to take shape, I realized that I needed a real project to serve as a starting point for the rest. Enter Hugelkultur. Sepp Holzer's work combined with encouragement from a friend convinced me that this was a great entry point into the type of ag I wanted to do.

I had a vision and I knew 3 things for certain:


It did not take me long to figure out that Hugelkultur was the best fit since it hit all the right points. The next logical step was to sketch it out. Below was the seed which eventually grew into a real series of hugel mounds. These mounds are now established and waiting dormant for me to rediscover them again in the spring. They have been carefully set up, nurtured and surrounded by perennials and fruit/nut trees. I poured my heart into this project and, like all the others, it all began with a few simple ideas and a sketch. Phase 2 of this project will begin soon and I could not be more thrilled about it. 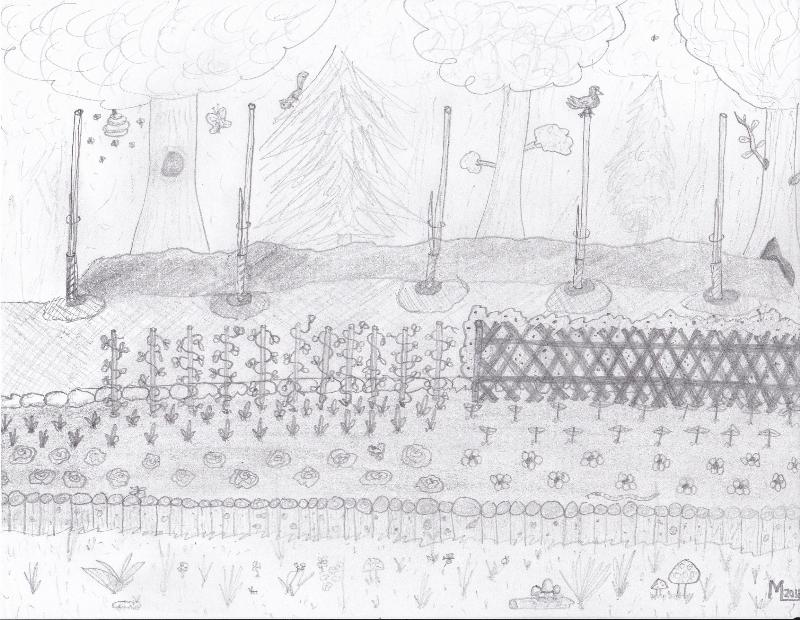 The basis for this one is both simple and complicated at once. It's simple for the fact that there's not much going on at first glace but complicated when you start to analyze all the different details and components. After looking closely, you should start to see that none of the elements are recognizable in the conventional sense of what we consider "plants" or "vegetation". I can only describe these life forms as alien. In other words, they are not of this planet, perhaps not of this dimension. Now before I go off on some sort of esoteric tangent, I will say that although they are alien, they are based on real plants. This was the basis for what eventually became my berry patch.

I'm still working on this area of my property and the patch itself. While it is nice to look at it, it's not functional and seems to almost be speaking to me and giving me signs that something is amiss or unbalanced. I am listening intently but I don't yet fully understand the message. The plants that inhabit the actual patch were not growing very well. The soil was purposefully left on the acidic side in hopes that the plants (mostly berries) would flourish. Sadly, that was not quite the case. The multiple varieties of blueberries, service berries and honeyberries seem like they would do well together in theory but this does not seem to be so in a more practical sense.

That said, the alien version of these plants are working together harmoniously so it could be that I need to emulate this balance more in my application. Or it could be that these plants are just not getting what they need like they are in the sketch. Either way, this is an example of something that is both unnatural and natural. Alien yet familiar. A potential for good but also for frustration. For sustenance but also potential toxicity. What do you think? What does this sketch say to you? 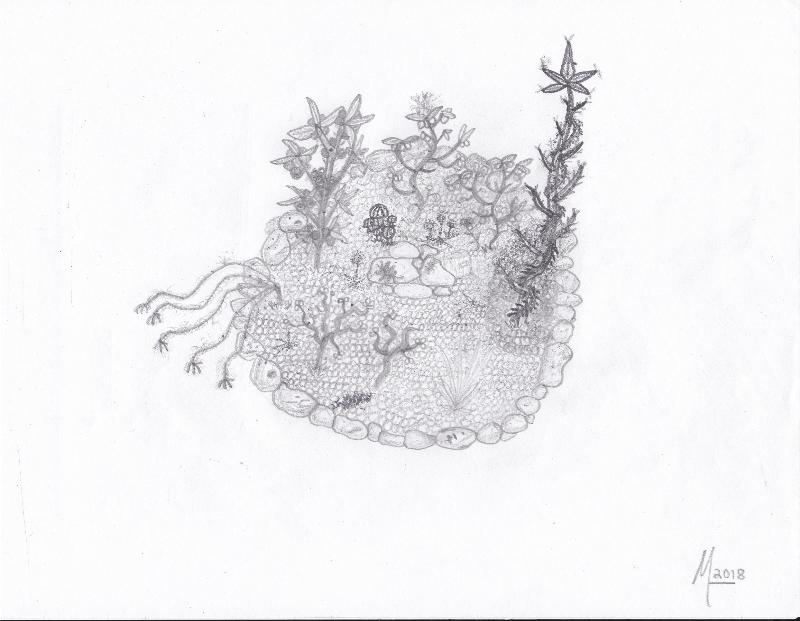 posted 9 months ago
Hi there, I was curious about your garden sketching.
But there was no art there anymore, or at least they did not show up on my side of the screen!!

Have you completed any lately?

Jill of all and Misses of Targets -JMH

Joyce Harris wrote:Hi there, I was curious about your garden sketching.
But there was no art there anymore, or at least they did not show up on my side of the screen!!

Have you completed any lately?

Second the motion! Would love to see these images, as they don't show up for me either.

Anyways, this thread reminded me that I used to sketch up garden plans once upon a time and maybe I should start again. Great entertainment for these cold rainy winter inside-by-the-fire days.

posted 8 months ago
Cool! Now I can see the images! Thanks, Nancy 😊


Nancy Reading wrote:This message will self destruct in 2 days.