Bennette Pool
Posts: 9
1
posted 2 years ago
Please bare with me if I'm in the wrong place or not. I am somewhat new to these type forums.

We recently started a very small hobby farm in central Alabama.
We had 3 cows, now 2. Had a steer we put in the freezer in January.
The others are a 2 yr old bull and heifer.
She is expecting in August.
They are a lowline- zebu cross.

We are just learning on the fly.
After doing the math we figured by the time the steer in the freezer is depleted
our heifer would have just calved and we would be without meat for a while.

So I began searching and found someone who had the same type cows that we did just across the Tennessee line.
The farmer had just passed away and his remaining family lived in Georgia and couldn't travel or take care of the cows.
So another local farmer helped to sell them for them.

We picked up a cow calf pair and was told the calf was 6 months old and most likely the cow was bred back.
We have them in another paddock separated from our other 2 cows.
We where going to take the calf and raise for our next meat. Which was going fine.

However the health of the cow was poor. We assumed from the farmer passing that she had been neglected for awhile and had been giving all her energy to the calf.
Over a 1 1/2 months time she begin to put on weight and looked better.

Then we discovered they where way off on their age by several months.
Just three days ago she had a beautiful new bull calf.
Everyone is doing well with no problems health wise.

Never calving before though I was unsure what to do.
At first the older calf was curious and seemed to be getting in the way of the mother and newborn.
The newborn calf would keep going to the older calf confused as if thinking it was his mother.
I separated the older calf to keep from confusing the newborn and so he didn't accidentally get hurt.

So these are my questions

#1.) Now the mother has bonded with the calf and they are doing fine.
Can I now put the older calf back in with them hoping he begins to eat again or do we keep them separated longer in hopes of him being totally independent.

Question #2.) We considered trying to bottle feed new born calf but we cant put that kind of time into it right now.
But we wondered if the newborn would accept both the bottle and her mom in hopes of us bonding better with the calf and also to help the mother gain some some strength and energy to get back into better condition.
Don,t get me wrong she is not sickly or anything just trying to improve her body condition better.
Yet didn't know if the calf would take to both her mother and bottle.

Any help, advise or criticism would be appreciated. Thanks
TACO-AND-MOMMA-COW.jpg 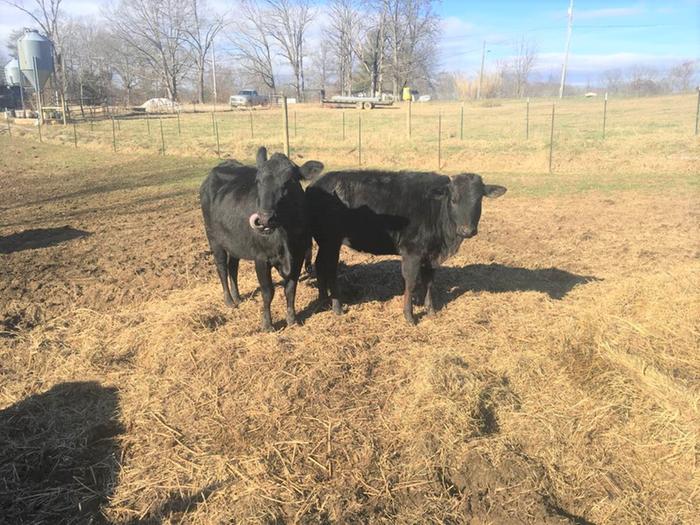 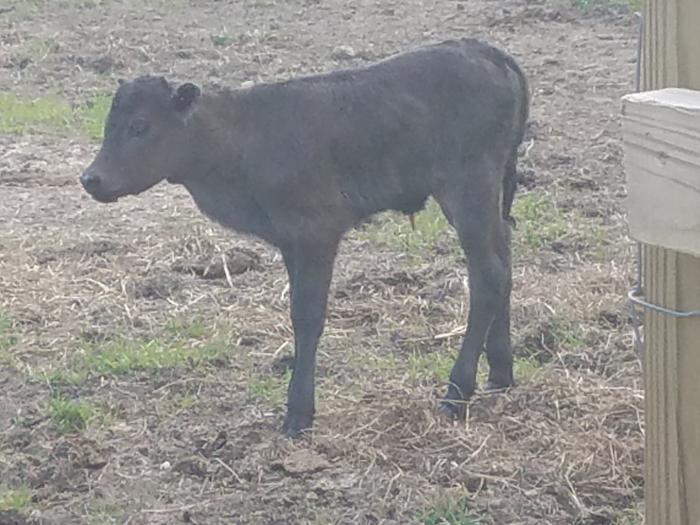 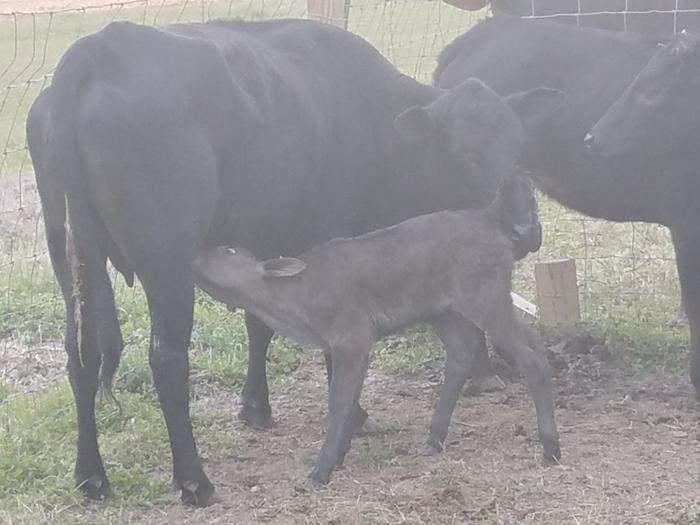 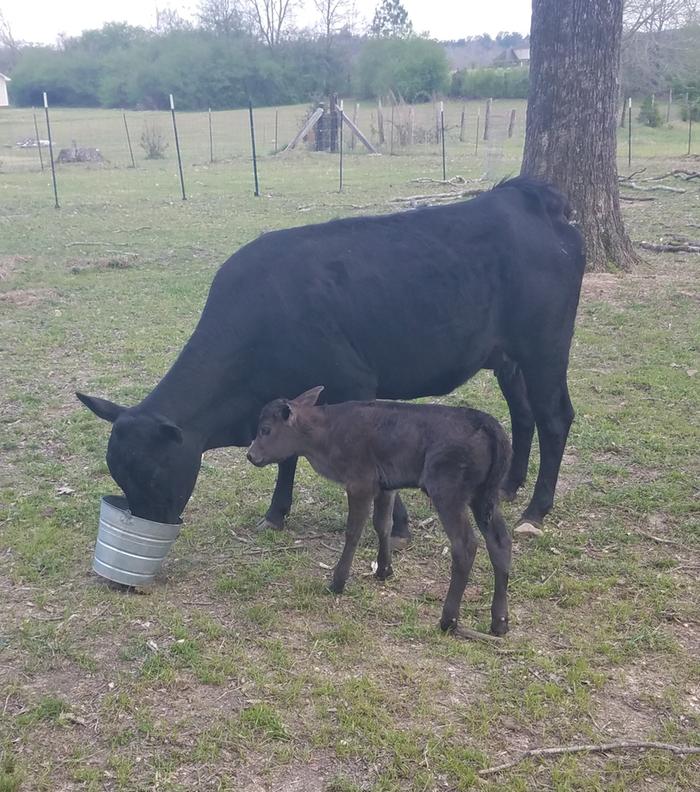 posted 2 years ago
Congratulations and good luck with becoming a cattleman. (check and see if you have a local cattleman's association, they can be a lot of help when learning)

Leave the calf on the mother, the milk is far better for the little one than any bottle. Bottles are for calves that have been rejected by the mother.
To get the calf used to you, get into the habit of spending at least 30 minutes in the pen with momma and baby, lay your hands on them both, brush them, etc.

The new junior (older calf) should be put in with the other cows. (BTW cows are females, bulls are boys and that is how most cattle people refer to them. green horns call them all cows)

do you have a vet online yet? cattle are prone to have problems and being able to call a vet to come will save you head and heart aches.
Since it sounds like cattle aren't going to be a livelihood thing, check your library for some animal husbandry books that feature cattle.

Bennette Pool
Posts: 9
1
posted 2 years ago
Thanks for your quick response.

She is in a paddock at the moment by herself.
She did finally eat some last night and has quietened down some.
I was wondering if it was OK to put her back in with her mom and calf by now.
Or if I needed to wait a little while.
I've even considered putting her in with our kune kune pigs for company.

We are unsure at this moment if we are selling the older calf, breeding her or for meat.

When we purchased the two back in February our plan was to breed the cow and raise the calf for meat.
We where caught of guard as to how far along the cow was in her pregnancy.
I knew we might have issues keeping that calf separated from our bull before she could get big enough for slaughter.
But for the price we paid it was worth the risk.

So the question is,  Put the older calf back with mom and new calf... Keep her separated... Put her with the pigs... or take a chance with the bull.

And yes on the books, Constantly reading books and researching and learning first hand all the info I can absorb.

On the vet we have one close by but not completely sold on them a large animal vet. Have found a vet 40 miles away that we have used
and have been very pleased with, But we are trying to get a relationship with the local vet just as a matter of timing.
We also have a good neighbor
with cattle who is helpful. He just happened to be out of town this week.

Oh by the way I was going to ck with my neighbor this weekend but whats your advise on age of castration and technique for the newborn calf.

Leora Laforge
pollinator
Posts: 156
Location: Saskatchewan
39
posted 2 years ago
Is your yearling in a pasture alone? That is the impression I am getting. If this is so she is probably stressed about being alone, cattle are herd animals and this could stress her enough that she refuses to eat.

If she is properly weaned so she does not try to nurse from momma cow you can just put her back in with the other two. She will be curious about the calf but should not hurt it. She will probably sniff it a lot and maybe try to play by running around and bucking.

If she is not properly weaned there are a few options. You could use a nose flap and put her back with momma cow. You could do a fencline wean system where she can be close to the others but unable to try nursing. If neither of those options work for you, you could sell her. If someone can mix her into a herd somewhere else she would be perfectly happy.

Your heifer is most likely a year old not 10 months. A cows gestation is 9 months same as a persons. It is incredibly difficult to rebreed a cow less than 3 months after parturition.

Good luck with your cattle.
Bennette Pool
Posts: 9
1
posted 2 years ago
Hey thanks for your input.

I just put the calf in with the cow and newborn this weekend while I had time to monitor them.
Of course it all went well. Like you said a little confusion but actually seem to perk the newborn up
having someone to play with.

The young calf went right of to grazing on grass as if nothing had gone wrong.

And your correct on the age. I just took the most youngest possible mathematically age to start with but actually
figured we where closer to 12 months like you said.

My other heifer is expecting late early August.
So this has been a learning experience and I'll be prepared for it.

Again thanks for your input.
Leora Laforge
pollinator
Posts: 156
Location: Saskatchewan
39
posted 2 years ago
I am glad to hear that the probelm is solved.
Lepke Buchalter
Posts: 21
4
posted 1 year ago
I had a commercial dairy (about 100 Holsteins and Jerseys) and beef cows before that. It's important that the calf get mothers milk, at least a quart, in the first 12 hours. After that the ability of the calf to absorb anti-bodies and mother's immunity greatly diminishes. To insure the calf got the first milk, if I didn't see it nursing, I would milk the cow and either feed the calf with a bottle or a force feeder. Not as bad as it sounds. Sold in dairy supply stores is a collapsible bottle with a long probe with a ball on the end. The ball insures the probe goes to the stomach, not the lungs. The bottle can be rolled forcing the milk into the stomach with little stress on the calf. By insuring my calves got colostrum, I only had one calf death in my years of cows. Other operators my size usually lost several per year. Another method is to freeze the extra colostrum of an older cow. One that's been on the farm for a long time and has built immunities to the local diseases. Thaw, warm and feed it to a calf from a young mother along with her nursing. It's not east to milk a beef cow, but it can be done.
If you turn out a older calf with a mother and her new nursing calf, the older calf may nurse (if allowed by the mother) and get most of the milk.