john hagan
Posts: 2
posted 9 months ago
I recently installed my first above ground electric fence but can't get any juice flowing. I think I might have a couple of things going on here. first I am not confidant that I terminated the positive side correctly. I just terminated it on a standoff before I came back around to where I started. second my copper ground rod is about 4 feet in the earth. if I get more rods they will be galvanized steel. can I mix metals with my ground rods? I got the dogs fenced in on a quarter acre and the charging unit says it covers 5 acres at .1 joule.

Yes, you can mix ground rod materials. When using multiple ground rods, space them about 8 feet apart and have them all connected with a single, unbroken grounding wire that the fence energizer can connect to. When you say terminated the positive end, can you please explain a little more?

john hagan
Posts: 2
posted 9 months ago
about my positive lead, I ran it out from the pos terminal around the yard using 1 and 1/2 inch standoffs and running it almost back to where the hot starts and terminating it on another standoff. (per instructions on youtube). from what I do know, tha does not seem to me to be much of a complete circuit. let me know if you need any more info.
James Freyr
steward

posted 9 months ago
Ok. It doesn't have to be a complete loop or circuit because the fence energizer sends a pulse in DC not AC. In other words, a length of electric fence will work as it should when the hot lead from the energizer is connected to a fence wire and that wire ran off into the distance and ended, without coming back around to the beginning.

posted 9 months ago
I just did a dog pen and the charger is on the opposite side of the gate and there's no wiring jumping across the gate. The wiring threw me at first because of basically being an open circuit. When an animal touches either the positive wire and the negative wire OR the ground, THEY complete the circuit. Or in the case of a visitor I had here today that insisted on petting the dogs, she completed the circuit. Here's a super basic diagram as it has no ground wires on the fence itself. They should have had the red arrows coming off the cows feet actually and not have had that red arrow in front of it's neck. Down the fence, in through the cow's nose, out it's feet. 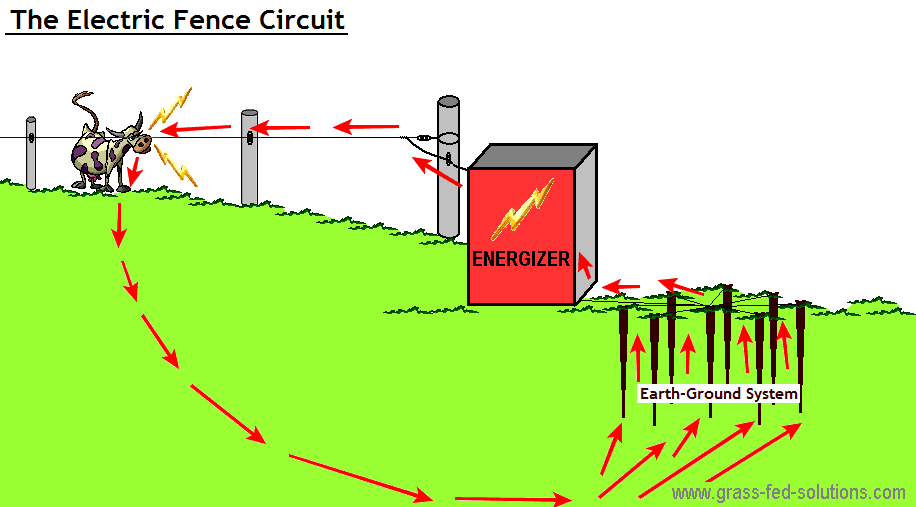 If the soil is super dry, the circuit has trouble completing when an animal touches it. That's why we alternate hot & ground wires on the fence. 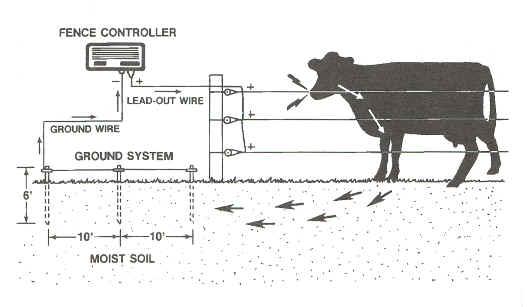 I'm not finding any good images with the ground wiring on the fence but in the above image, say that middle wire would get connected to the ground rods instead of being jumped out with the other two hot wires. Everything else is the same, including charger hookup.