The Show Must Go On!

posted 1 year ago
Rock the Flock was interesting this year. This is the third time we have put this event on, and yet this was our biggest production yet.

We scaled back on a few things granted, like we only had one bounce house for the kids instead of two, but we had a lot more games, face painting, coloring, and sports stuff set up for them, But the main entertainment was bigger. We contracted out a bigger stage, sound system and lights, and also increased the number of bands from (3) the first year, to (6) last year, to (8) this year. We alo concluded that we needed to pay the bands for their skill and time, even though this is a totally free event for anyone who wants to come, and ALL money goes to charity.

For those that do not know, Rock the Flock is where Katie and I open up our farm, invite the public, and have a benefit concert to fight drug addiction in Maine. Since our farm is on a hill, we have 365 degree views, and can see mountains over 150 miles away, so it makes for a great place to have an outside concert. Over the last (2) Rock the Flock events, we have managed to raise $10,000 in donations, and have a lot of vendors like radio stations, drug councilors, and public service organizations on hand to give resources to people that are struggling with drug addiction. For Katie and I, that is important as we lost my Brother-In-Law to fentanyl-laced heroine (3) years ago. Everything is free, from coming to the place, to even the food. If people want to donate, there are buckets to donate, but there is no obligation.

Unfortunately, thunder clouds loomed just as we had started, and 5 minutes in to the concert a microburst came in and stared to blow the tent over the stage off. Guys grabbed it to keep it from toppling over, and we were able to weather the storm, but heavy rain shorted out the main mixing board. People attending ran to their cars for cover, or gathered under the big tent we had set up for people, and we were not sure what to do. In the end, we set up a makeshift stage in the big top and while the sound was not as good, all (8) bands played. Surprisingly few people left, and when the storm blew past, they came back from the cars and we had another 5 hours of concert.

I would say we probably had 300 people in attendence. That is pretty low compared to the 650 or so we had last year, but one guy who came was a concert promoter and wanted to see what we were up to. He liked our location, but I am not sure how big we want to get. After spending so much money on staging, speakers and lights, taking two days to set up, and lasting only 5 minutes due to the storm, I am not sure bigger is better. Everyone thought the concert went well despite the set-back, since people were right inside the big top with the bands who played. It was just great to see everyone pitch in, and keep the concert going, I mean 5 more hours of concert!

Over the next few days I will find out how much we have raised this year, and get some pictures put up of the event this year. I can show you all kinds of pictures, but this is what it is about. This is a mother who is hugging her son who just spent 15 months in drug addiction recovery to get her off heroine. The program we support, Teen Challenge, is completely free to participants, and gets no governmental funding (due to it being a religious organization). This is a Mom getting her son back. 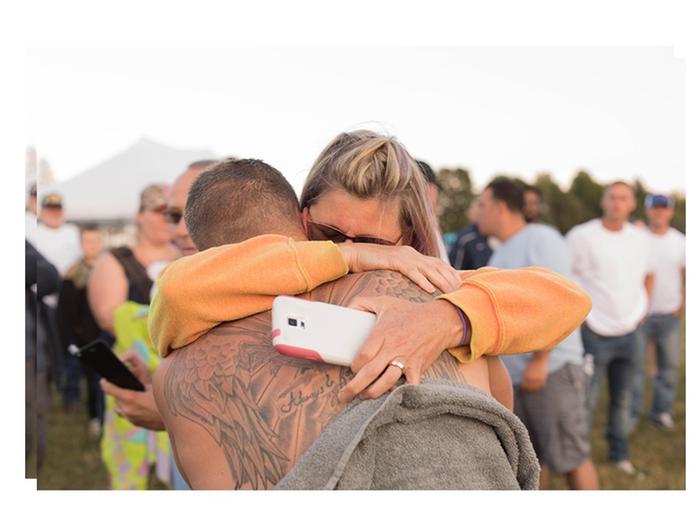 posted 1 year ago
Wow, this is a great event!

nishantt singh
Posts: 7
posted 1 year ago
Amazing this was a incredible event. i think this types of events need to be done.
i salute you for your great efforts.
Once again good job.

I'm glad your event was able to survive the storm and continue. Every heart you touch and body you save is amazing and inspirational and yeah, everything!