posted 1 year ago
I have a source of a lot of sawdust and wood shavings from a friend's business where they make furniture and caskets. Since organic material is a challenge here, I feel this might be a solution for me. But I'm trying to find a good solution for the "nitrogen robbing" tendencies.

My thought is, why can't we charge it, similar to biochar? I can think of multiple ways to do this. One way I'll be doing it is by using it as deep bedding in my rabbit/chicken house (rabbits suspended in with cages, chickens free to roam below). Poop, pee, scratching, food, bugs, partial composting . . . Viola!

Another way I'm experimenting with is to layer the sawdust with some other organic material (currently using chopped up sugar-cane scraps), soil (for the microorganisms and benefit of clay), dry goat manure, and old ash. There's about 2 parts sawdust and 1 part everything else.

I'm then adding the REAL key . . . Liquids of all kinds. Coffee grounds in water (I boil my coffee in a saucepan and pour into an old piece of t-shirt to filter, so when I wash the pan and rinse my "filter," I just pour it into the bucket). Water from boiling macaroni and cheese, rice, potatoes, or anything else. Urine . . . That's all the moisture I'm adding.

After a couple of days I'm flipping the whole thing over into another bucket and back into the original bucket. It's in an old 5 gallon bucket with cracks in it for air circulation.

Right now it's getting super full. I hoped it would start settling, but in the first week of this experiment, it doesn't seem to be settling yet. So I'm thinking of pouring it into a big grain sack (woven plastic) and every couple of days just pick up the sack, kick it around, and set it down on a different side.

The way I'm doing this, the stuff is keeping a gorgeous "wrung-out sponge" level of moisture throughout, from top of the bucket to the bottom.

It SEEMS that after a relatively short time, there should be an enormous amount of good stuff in there. The sawdust is a lot like biochar that way in that it absorbs everything. But since it's also much softer and more pliable, it should serve as food for bacteria and other microorganisms. After a couple of weeks, my theory is that this might be some super nutritious stuff to plant in, or it might make an excellent potting soil.

I'm thinking about adding a small bit of diluted sea salt as well as some diluted molasses to help encourage the goodness to take hold. Maybe a bit of watery milk too? Beer? The possibilities are endless!

Thoughts? Anyone done similar things? Am I going to kill my plants using this stuff?
Marco Banks
gardener

posted 1 year ago
I don't think you'll hurt anything if you leave it on the soil surface and don't till it into the soil.  It will break down quickly and the worms and other biota will feast on it.

If I wanted to "charge" sawdust, I'd pee on it.

Marco Banks wrote:I don't think you'll hurt anything if you leave it on the soil surface and don't till it into the soil.  It will break down quickly and the worms and other biota will feast on it.

If I wanted to "charge" sawdust, I'd pee on it.

I agree. But my goal is to get it into the ground as quickly as possible. It should make a bigger impact IN the soil than on it. Our clay soil is a challenge!

I did mention the urine. That's a big part of my experiment. It probably got lost in the lengthy post! :)

But yeah. I have been saving all my urine for the garden for a while. Finally got hubs contributing as well.

It's a bonding experience!
Priscilla Stilwell
pollinator
Posts: 270
Location: Haiti
28
I like...

posted 1 year ago
I'm on my third batch of my "super-sawdust," and beginning to understand how it's working. It seems to be more-or-less useable in a week. Longer time is of course better, but I'm having success with it quite quickly . . . For now.

You can mix as you go or not. I've done it both ways, and it doesn't seem to make a huge difference since you'll mix it well in a few days. But it might help. Who knows.

Now, I start adding more nutrition. I'm playing with different things. The idea is to get as much life into the mix as possible, which means creating a favorable environment and providing the food they need to thrive. It's also where I think about the nutrition the plants will use.

If you have stuff in powder form, this is the time to add it. I've used ground eggshells for a slow-release of calcium and other goodness for the plants. I've added flour that had gone bad (make sure to mix that in well so it doesn't clump and make it harder to break down). I've also sprinkled some sugar in there, though I hear that might not be beneficial . . . I suppose powdered mil would be good . . . Dried coffee grounds . . . Whatever.

Over that, I add liquids. These include some of the fermented rice water I make for my hair, the water I strain off of my macaroni, veggies, or whatever I boil. The water from rinsing out my coffee pot (along with the grounds), a teaspoon or so of sea salt diluted in water, some milk. Urine (I just dump it in straight). Blood drained off the chicken. When I get my compost tea setup, I'll throw some of that in there too. Beer would work (not much beer gets wasted around here), and probably a ton of other stuff.

Once all the liquids are in there, no need to add water. I leave the bucket uncovered to get good air circulation, which leaves it open to rain too. No problem. I just set the bucket at the base of one of my papaya trees so any drainage benefits it. To be honest though, this mix holds an enormous amount of liquid. I've poured up to three gallons of liquid into a bucket of the stuff in a single day, and never noticed more than a two or three-inch diameter wet spot under the bucket where it drained.

Every day I'll throw more nutrient-rich liquid in such as coffee grounds and rinse water, water drained from whatever I boiled that day (today it's plantains), or urine. I don't really think you can add too much. Remember, the problem with using sawdust direct is that it steals nitrogen and other nutrients. So dump a ton of nutrients in there (that's my theory anyhow).

After 2 or 3 days, I dump the bucket out on a tarp, mix it up well, and put it back in the bucket. Then dump more liquids in, but I'm not as concerned about it at this point. Just coffee rinse, some urine, or pasta water . . . Whatever. The point here is to keep it moist. At this point the sawdust will still be noticeably lighter than the rest.

At the end of the week, I'm dumping it into a grain sack with what I had from before. Add a bit more moisture and shake it up and close it. Every few days I can agitate the sack again to mix it and force oxygen into it. But at this time, it is all dark even though the sawdust is distinguishable. That tells me that it's well homogenized and the nutrients are soaked into the sawdust. The mixture is fantastically light and fluffy and evenly holds moisture like no one's business.

I've used it to start tree seeds and to transplant. Everything I give it to seems to jump for joy! Half dead potted plants put out new leaves two days after adding some of this mix to their pots.

My newest experiment is feeding it to my worms. Once I started adding sawdust to my work bins, they lost all interest in any food scraps and just wanted to hang out in the sawdust. That's great for discouraging black soldier flies that get lost and think they should set up in the worm bins, though they still show up and I pick them out (a screen on the top of the buckets is on the agenda).

I recently split my one worm bucket into two. I haven't done an actual harvest of castings yet. I usually just take a handful, sift out any worms or cocoons and throw it where I need it. But now, I'm trying a new thing. I'm thinking if I dump this goodness at the top of the existing bin contents (probably 90% finished castings), the worms will work their way into it and move up the bin (5 gallon bucket) to eat through the fresh stuff. This should add a whole other layer of nutrients and fertility to the super-sawdust. Haven't quite worked out how I'll separate the finished stuff out, but it's a process.

Another experiment I'm interested in trying is to put the super-sawdust in a bin or box and put a fungi slurry in it to see if I can propagate mushrooms.

Once I get more of this stuff, I'll be able to experiment more with how to use it. I started some veggie seeds this week in egg cartons, and am thinking I'll open up a hole in the bed with a knife or machete, drop in some of this goodness and plant the veggies on top. Or perhaps plant the veggies and top dress it with this stuff and then mulch so the roots don't get lazy.

I'll try it both working it into the soil and using it as a mulch or a sub-mulch (meaning a thin layer under a thicker mulch layer. 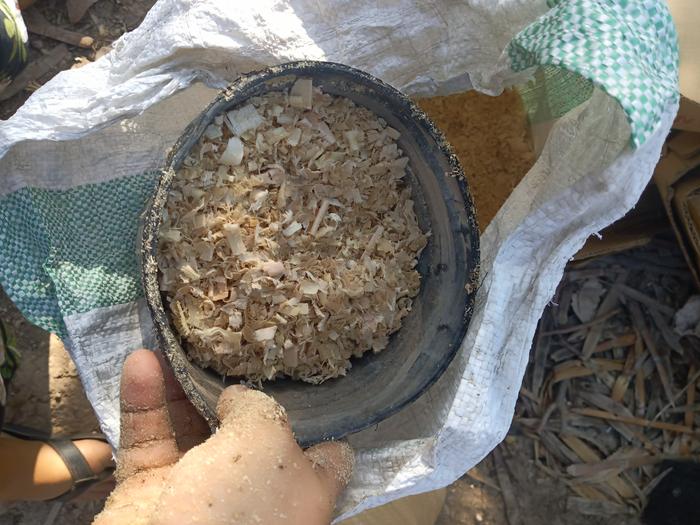 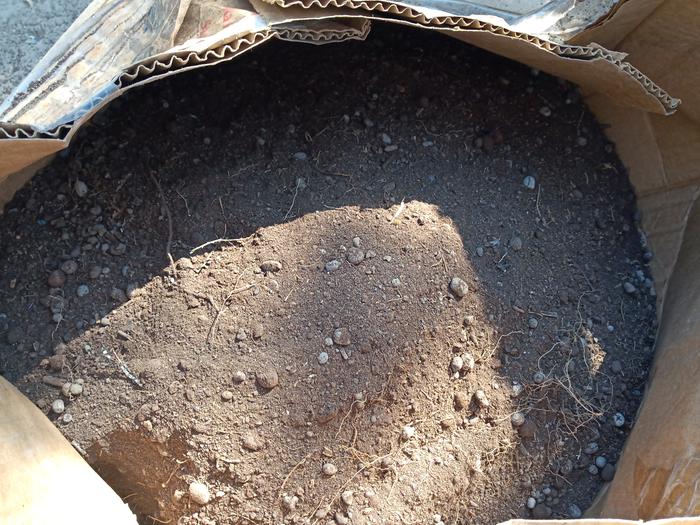