Sequential/collaborative planting in the arid tropics

posted 1 year ago
I'm learning gardening all over again in Haiti (from Wisconsin). I learned quickly that traditional Haitian methods of growing don't work here in our hot, dry, windy, rain-shadow.

Currently I've basically revamped my whole little veggie/flower garden and am running two meter-ish-wide beds north-to-south rather than narrow east-west ridges and irrigation trenches that the locals set up for me. I've been dumping all kinds of rough organic material in there this year, including chop-cary-and-drop, sugarcane scraps, corn husks, kitchen waste, goat manure, charcoal powder (charged), etc, and the soil seems to be actually holding moisture and nutrients now.

But now I'm wondering how I can take advantage of our year-round growing and balance with the wet and dry seasons? What veggies can I grow for the dry season which will potentially serve as shade for the more heat-sensitive plants? My thought is plant more heat-tollerant plants on the west side of the beds and shorter, more heat-sensitive plants on the east side of those plants. I plan to do a pseudo no-dig/deep-mulch style of gardening where most plants are simply cut off and dropped in place with their roots remaining in the soil to enrich and aerate the soil.

I know this is a little confusing, but hopefully you have the gist of what I'm trying to do.
Tyler Ludens
pollinator
Posts: 11804
Location: Central Texas USA Latitude 30 Zone 8
1078
I like...

posted 1 year ago
I have a minor suggestion about bed width.  I have found what works best for me is what Geoff Lawton calls a "double reach bed."  It's what he uses in his kitchen garden.  One is able to reach the center of the bed from either side without stepping on the soil.  This preserves soil structure and avoids compaction, which is a problem in clay soils.  My beds are about a meter wide.

The transitional seasons are the hardest to figure out.  I'm still not good at this, even though I've been gardening here for years.  It's still too hot for cool season crops, and most of the warm season crops have given up in the heat.  This week highs are around 97F, next week around 94F.  Next week I might prepare some beds for durable greens such as Collards, Arugula, and Kale.  I plan to make little shade houses over the beds to keep the sun off the soil.  But I don't expect very good germination.

posted 1 year ago
Yes, I did mention that I've changed the beds to about a meter wide. I'm slightly digging down the paths that go between and all around, and adding that to the top of the beds as I layer in organic material and whatnot, to help hold some moisture and help it break down. I am planting right into that without letting it even finish breaking down, with the assumption that the organic matter under the soil will hold moisture along with the top mulch. Also, by having the paths lower than the beds, it still allows drainage when we do have torrential rain. I'm laying down sugarcane scraps and sawdust in the paths to help absorb the water and to keep the soil from compacting so much.

I just planted 3 moringa cuttings a week ago or so on the north end of the veggie beds to help shade what will hopefully be a veggie/perennial/flower bed right against the front of the house if I can improve the soil and give some shade. Tonight, I planted 2 moringa seeds in each hole, making 3 holes on the west side of each of the two veggie beds. That puts them a meter apart or so. I'm not sure how easily they'll germinate, but if both come up, it's not a big deal because I'll just use them for shade and then chop and drop anyhow. I'm hoping that will alleviate my need for a shade cloth by allowing good sun in the morning and filtered sun in the afternoon.

posted 1 year ago
Oops, I read it wrong, I read it as two-meterish wide beds!  :o

Here we get 15 - 40 inches of rain per year.  So far I have not been able to grow any food except cactus and some edible native plants without irrigation.  I think it's a great goal to work toward, but difficult to achieve unless one is very limited in what one grows.

posted 1 year ago
I have been looking into the potential for bucket drip systems, which might work for us if we can't go irrigation free. And if it increases our ability to grow our own food, it's worth it, I think. Still learning how to best do things here.
Su Ba
pollinator
Posts: 1820
Location: Big Island, Hawaii (2300' elevation, 60" avg. annual rainfall, temp range 55-80 degrees F)
767
I like...

posted 1 year ago
I have zero personal experience growing in your conditions, but I'm thinking about how old Hawaiians dealt with their dry areas. Of course plenty of their dry areas weren't cultivated, but according to diaries and ship logs, there was some that were. Those Hawaiians had no irrigation, but did develop water conservation methods which have recently been investigated and "rediscovered".

In my spot of the islands, the old Hawaiian culture used the Kama'oa plains to grow sweet potatoes in the moister dry areas and gourds in the drier sections. They didn't have pumpkins, but gourds are similar. Gourds were traditionally planted during the season of rains, and allowed to grow and mature in the dry period. Apparently this method worked.

Sweet potatoes were grown in prepared spots in the dry areas. The thought is that the farmer moved lava rocks and stacked them in such a way as to create depressed bowls a few feet across. Vegetation was piled into those bowls, mixed with whatever soil was there, and allowed to decompose for a period of time. Then a sweet potato plant was grown in that bowl. The growing vines were kept turned back into the bowl area so that all the tubers were confined to the bowl. When tubers were harvested, sometimes the plant was carefully removed and replanted. Other times more vegetation was added to the bowl and the cycle started all over again.

Both gourds and sweet potatoes were often grown along rock walls, on the leeward side of the wall. Rock walls were around 3 foot high, high enough to discourage feral pigs. Generally the wall was 1 1/2 to 2 foot thick at its base. Hawaiians learned that the soil on the leeward side was moister and retained the moisture longer. Since growing along rock walks was so successful, the old Hawaiian field system has lots of walls running around and through them. The rock walls tend to capture moisture from not only rains, but from the air, storing it under itself in the soil below.

Mulch was used conserve water and also provide fertilizer. Hawaiian sugar cane leaves have been found to fix nitrogen right at the stage that Hawaiians used them for their mulching. Thus the plants benefited with not only a mulch, but with a nitrogen boost at the same time. Without a constant mulch, soil moisture plummets due to tropical sun, near constant winds & breezes, and rocky soil.

posted 1 year ago
That is very very interesting! It's similar to what I'm doing, although rather than a pit, I'm making my beds rectangular. I'm in search for some logs to bury half way into the soil along the beds to mark them and also to hold moisture and add organic matter as they decompose.

I would think the swale mounds I'm making further away from the house act similarly to the rock walls you mentioned.

My additional challenge is that because the soil is clay and it's fairly flat here, when the rains do come, it can bog down plants. So it's a constant fight between keeping them wet and keeping them dry. That's why nutrient-rich pits are a good solution, but they have to be mounded to she'd excess water.

It's all a learning process. My husband is convinced my gardening is an utter failure. Haha
Rene Nijstad
pollinator
Posts: 302
Location: La Mesa, Cundinamarca, Colombia
86
I like...

posted 1 year ago
We grow a lot of pigeon peas. It's a bushy nitrogen fixer and creates nice shade. It loves hot and dry, and we generally cut it back at the start of the rainy season. The bushes produce for about 3 years. Tastes great too!

posted 1 year ago
I believe pigeon peas are what I planted around the base of my papayas. I don't remember which they were. They we're sprouting and needed a home in the dirt! They are doing pretty well. Only a couple of weeks since planting.
IMG_20190905_081231.jpg 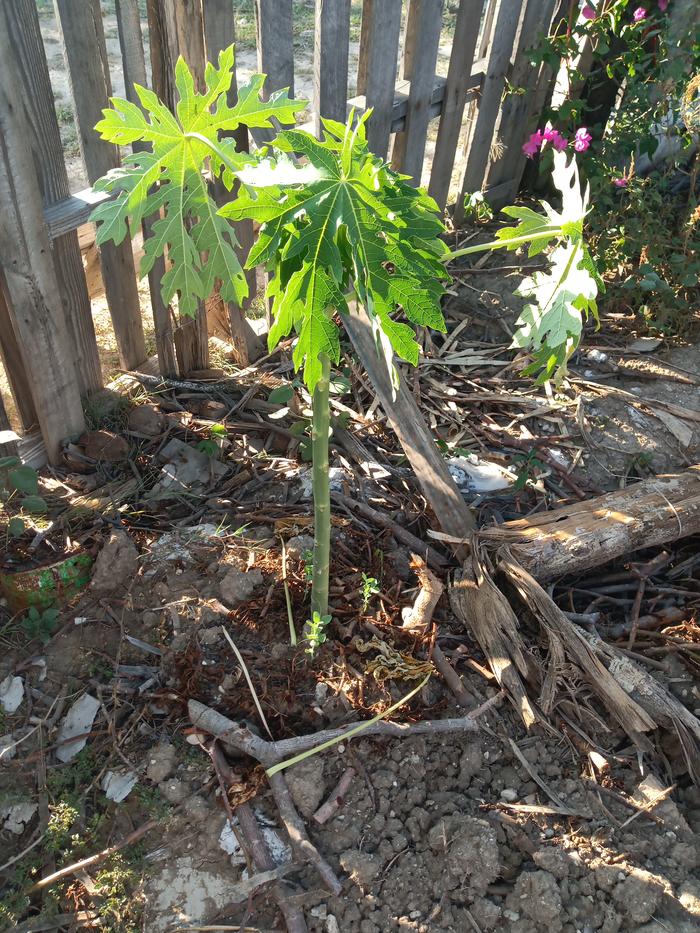 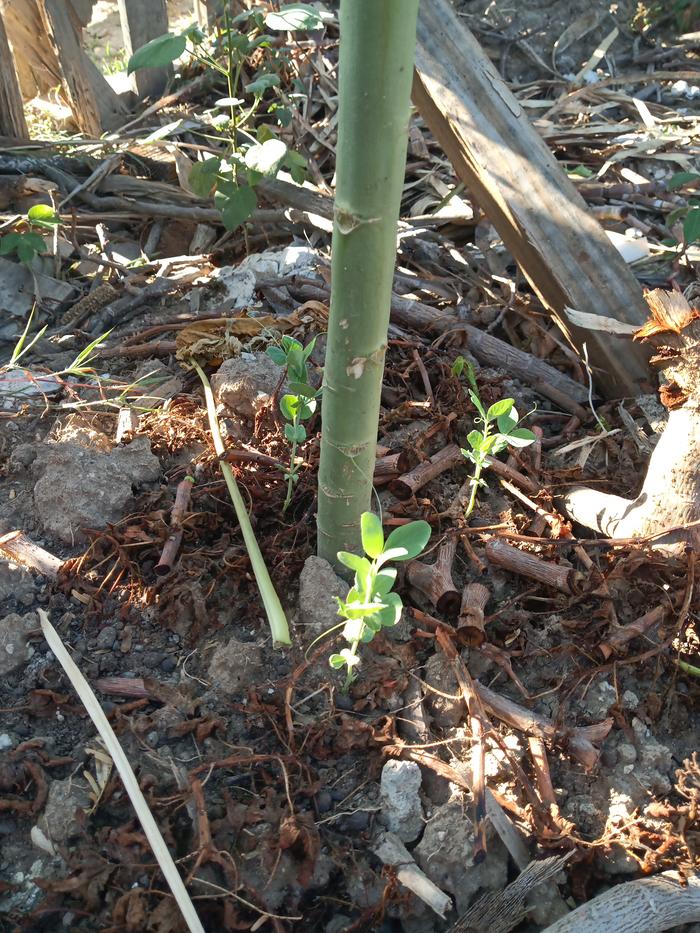 posted 1 year ago
Those are not pigeon peas, they look like regular peas to me. I'll go out and get some pictures later.

Rene Nijstad wrote:Those are not pigeon peas, they look like regular peas to me. I'll go out and get some pictures later.

Not sure what "regular peas" are, but they're not snap peas or sweet green peas (though I think these might have been the green ones). They're a more bland flavor that is made with rice here, with lots of protein. I'll have to see if one of the students can identify them for me. But sometimes the English name is hard to figure out.

They're growing well with no extra care. So that's good. And I know we can eat them, so double plus! Haha
Rene Nijstad
pollinator
Posts: 302
Location: La Mesa, Cundinamarca, Colombia
86
I like...

posted 1 year ago
Some pictures of pigeon peas. These are small size plants. They grow about 2 meters tall over time, you can cut them back and they will grow again. It's quite a productive bush, and they like hot sunny weather and are very drought tolerant.

Below it a picture of our "regular" peas. We throw the kitchen waste directly under the garden mulch and sometimes a pea comes up like this. They are probably the same green peas you have there, not a lot of taste, definitely not so sweet.

Moringa grows here too, also drought resistant, especially when over a year old.

Trees here that also like hot and dry weather are mango and cacao. We have tried planting seeds from acacia trees we see growing next to the roads everywhere and that worked good too.
pigeon_pea_small1.JPG 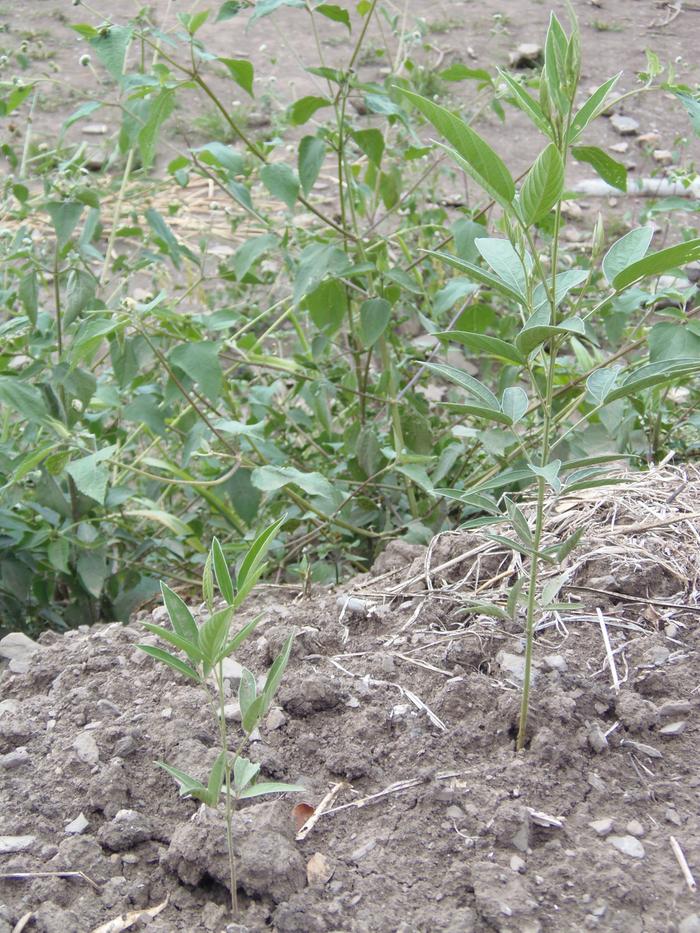 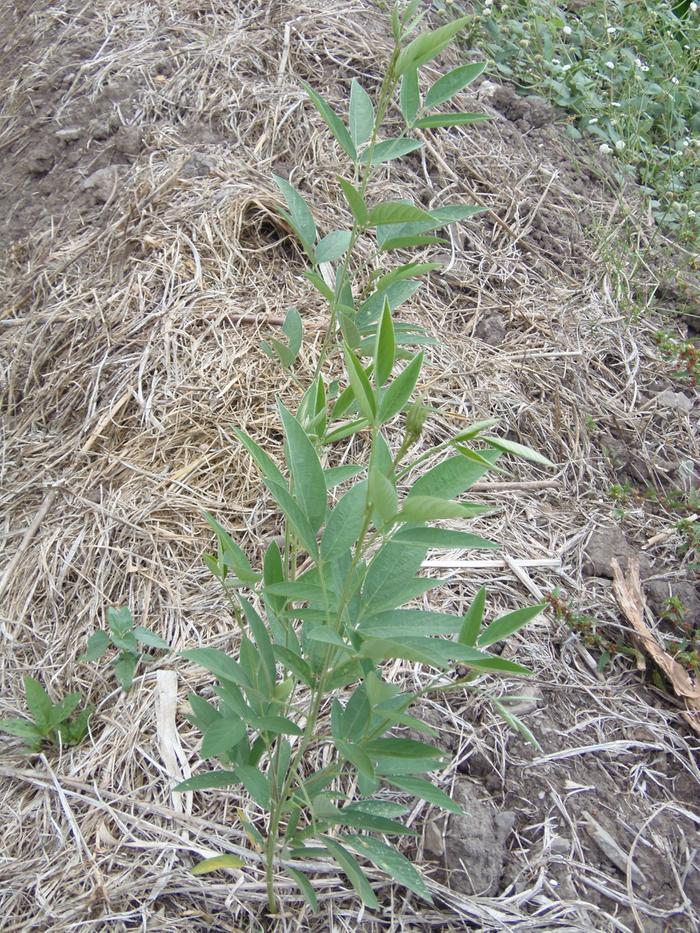 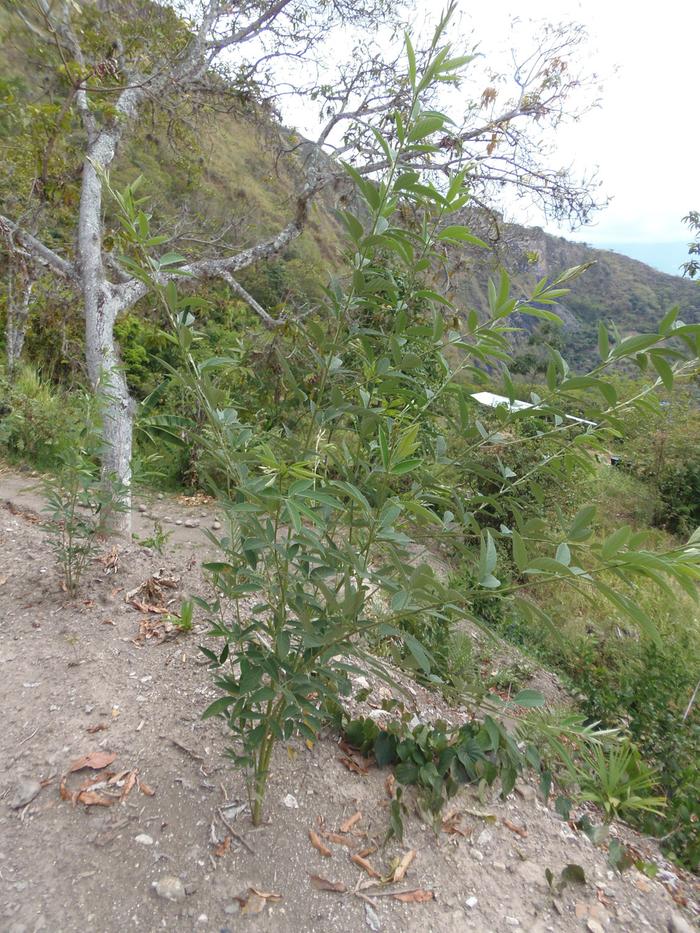 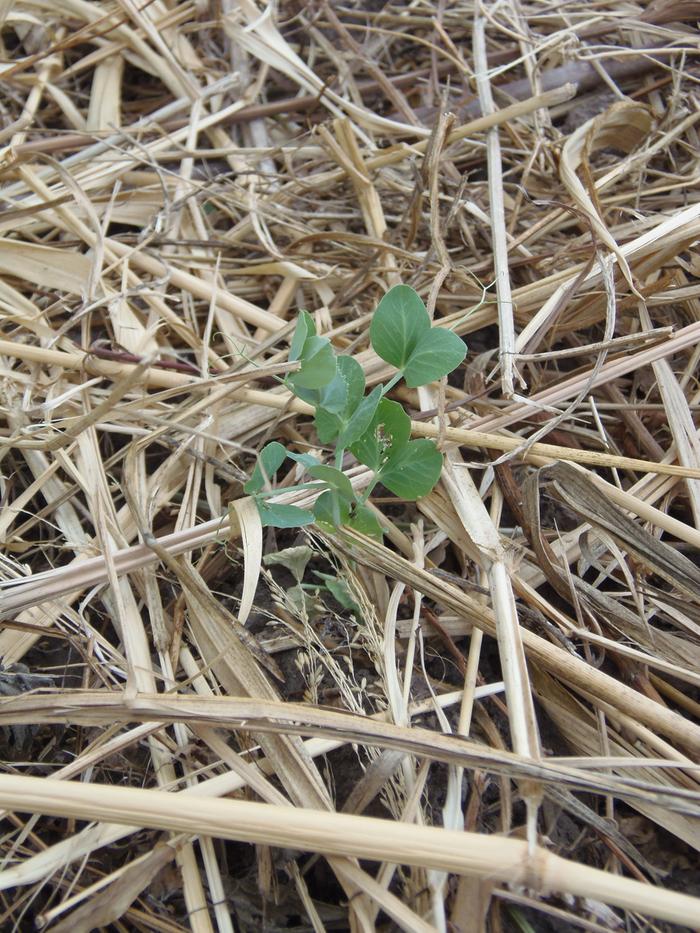 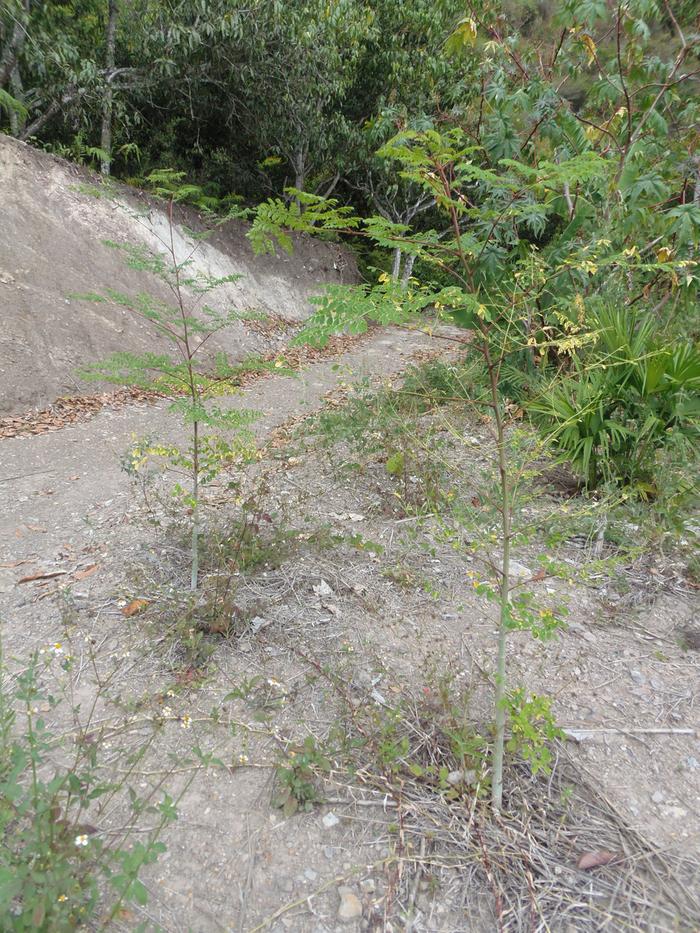 posted 1 year ago
Thanks! That's helpful. I didn't realize cacao likes it dry. I thought it was more of a higher-elevation tree because it preferred (relative) cool and moist. Makes me want to try some here!
Rene Nijstad
pollinator
Posts: 302
Location: La Mesa, Cundinamarca, Colombia
86
I like...

Priscilla Stilwell wrote:Thanks! That's helpful. I didn't realize cacao likes it dry. I thought it was more of a higher-elevation tree because it preferred (relative) cool and moist. Makes me want to try some here!

That sounds like coffee to me... We're trying to grow some but it's too hot and dry here for coffee.

Priscilla Stilwell wrote:Thanks! That's helpful. I didn't realize cacao likes it dry. I thought it was more of a higher-elevation tree because it preferred (relative) cool and moist. Makes me want to try some here!

That sounds like coffee to me... We're trying to grow some but it's too hot and dry here for coffee.


Yeah, I thought they needed similar environments. I'd be thrilled to be able to grow some cacao.