Heather Haakenson
Posts: 4
Location: Spokane
posted 11 months ago
Hi, I appreciate the youtube videos you permies people post and I would like to help subtitle them in the languages you guys want. For most languages, I would use google translate. I could edit the Spanish to make sure it's accurate.

Here's the method I plan to use:
-

Here's a video of mine where I've already used this method. In my video, you can change the subtitles to Spanish, Portuguese, German, Simplified Chinese, and English. But I could also add any language google translates, which is a lot.


However, in order to subtitle the videos, I can either walk someone you deem trustworthy through the process, or I need to be able to log on to the youtube account that posted the video. Or I could *possibly* upload the videos to my account and subtitle them, but would probably need permission for that.
paul wheaton
master steward

posted 11 months ago
There have been a couple of times that somebody provided me with the file that goes into youtube to provide subtitles.   It turned out to be pretty easy for me to put the file in.   I think the file has to have a time stamp.

Is there a video you would like to try first?

You have to go into youtube creator studio to get them in the form of an srt file.

First you log into your google account and go to "YouTube Studio" - first attached screenshot
Then you have to respond to a question why you are using the creator studio classic version of youtube studio beta, screenshot 2. (Your guess is as good as mine on that?? It's the only way I'm able to get to the srt file. Maybe there's an easier way.)
Then click on "videos" over to the left under "video manager" and then next to the video, click on edit and scroll down to "subtitles/CC", screenshot 3.
Then over to right click on "English", screenshot 4.
Then to the left, click on "actions" and scroll to "srt", screenshot 5.
The srt file with the auto-generated English should appear in your download folder. It's timestamped like you said. Screenshot 6 is what my file looks like.

Send me your English file, and I'll edit it. This needs to be done because not everything is generated correctly. In fact, I haven't seen them get "hugelkultur" in the English correctly. I've seen it generated as "hula culture", which I kind of like. Makes me think of maitais and beautiful beaches. So I'll edit the English file, and send it to you and you load it back in. It's really important to have the best possible English file, because then it gets machine-translated to the other languages, with a varying degree of accuracy, depending on the language and how good the English source file is. When I send the English back to you, I'll send screenshots showing how to load it back in, and how to get youtube to translate it. This is the easy part! Please choose Spanish, as I want to share the video with Spanish-speaking friends. Then I can review the Spanish for accuracy, and I can edit the Spanish file, if needed. (I'm a near-native speaker.)

You can also have google translate it into many other major languages. You should look at your google analytics and see what countries are reading your permaculture stuff, and translate to those languages. It will be machine-translated, but google translate is pretty good. I believe for most languages it has a 75% accuracy or better. I can help with any questions or tasks regarding this. I worked in translation/localization for 3. 5 years and did terminology and other localization work in more than 100 languages. I can at least spot-check the latin-script languages for terminology like "hugelkultur". Right now there are only 8 languages that have wikipedia articles about hugelkultur, but there may are other sources that can be researched. Interestingly, the German Wikipedia page calls hugelkultur, "Hügelbeet". Hügel means hill and "beet" means bed. "Hügelkultur" means "hill cultivation" so that seems to be fine too. They may have a few different terms for this in German.

Let me know if you have any questions or if I can help with any step.
1.png 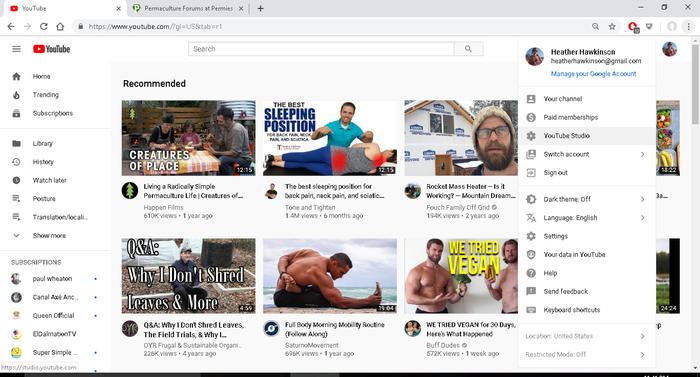 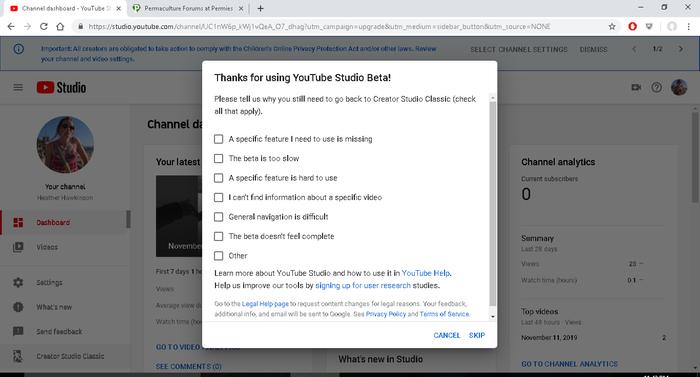 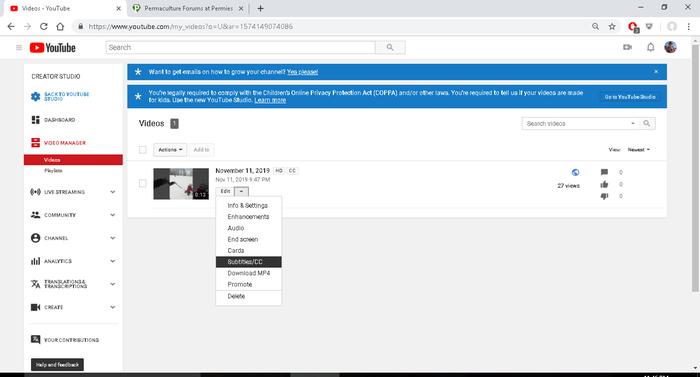 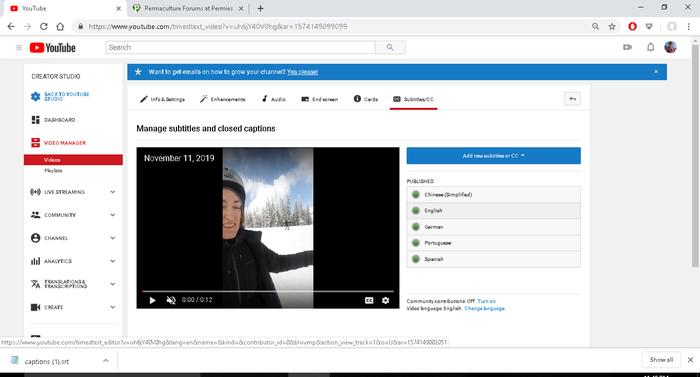 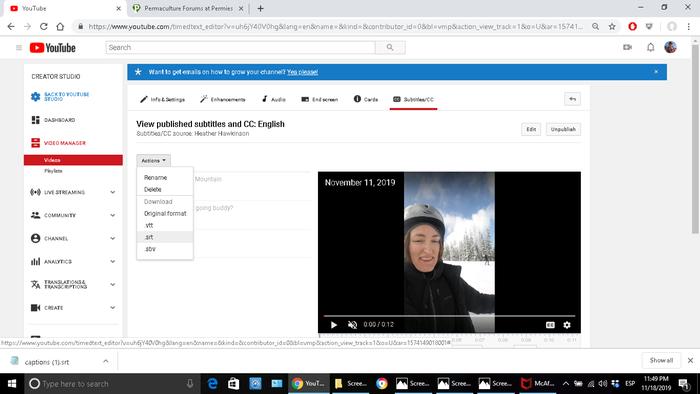 posted 11 months ago
That video has me in it, but it is not my video.

Heather Haakenson
Posts: 4
Location: Spokane
posted 11 months ago
Oops, sorry. How about this one?

posted 10 months ago
Heather, sorry for the delay ....

I just tried to find that file for one video and did not.

On this video https://www.youtube.com/watch?v=Rtm90p5CNas   I activated something about closed captioning to be public.   Does this change anything for you?

posted 10 months ago
"community contributions" are now "on" for the one video.

posted 10 months ago
here is a file i was able to get - not sure if it helps
Filename: captions.sbv
File size: 3 Kbytes