Erica Cawood
Posts: 21
3
posted 1 year ago
I have a Narragansett turkey named Olympus. At first I thought it was a female but now I’m not sure. I have been having problems with my previously sweet baby turkey attacking one of my poor ducks and I wonder if it’s because it’s a male. Maybe someone can clarify which it is? These are my first turkeys so I’m not as clear on early signs. Thank you!


Also, if anyone has experience with this, I have a bourbon red as well that had a broken leg as a two week old poult. I managed to splint the leg and save her, but she grew much slower as a result. She’s still not full size and I wonder if she ever will be? Is she stunted?
B71BCD36-8C20-498E-AB5E-E8E1CCD056EC.jpeg 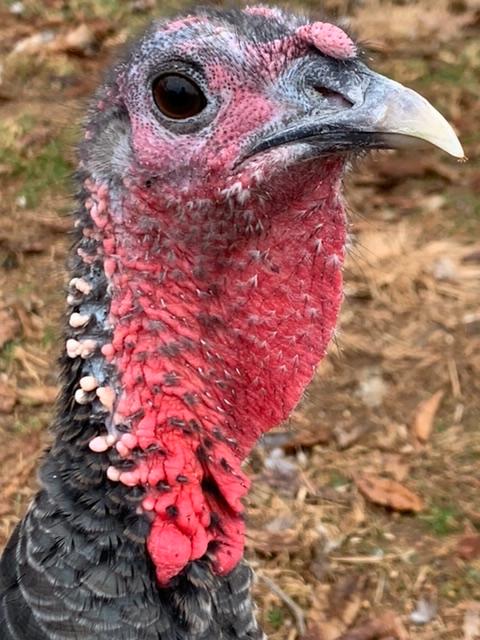 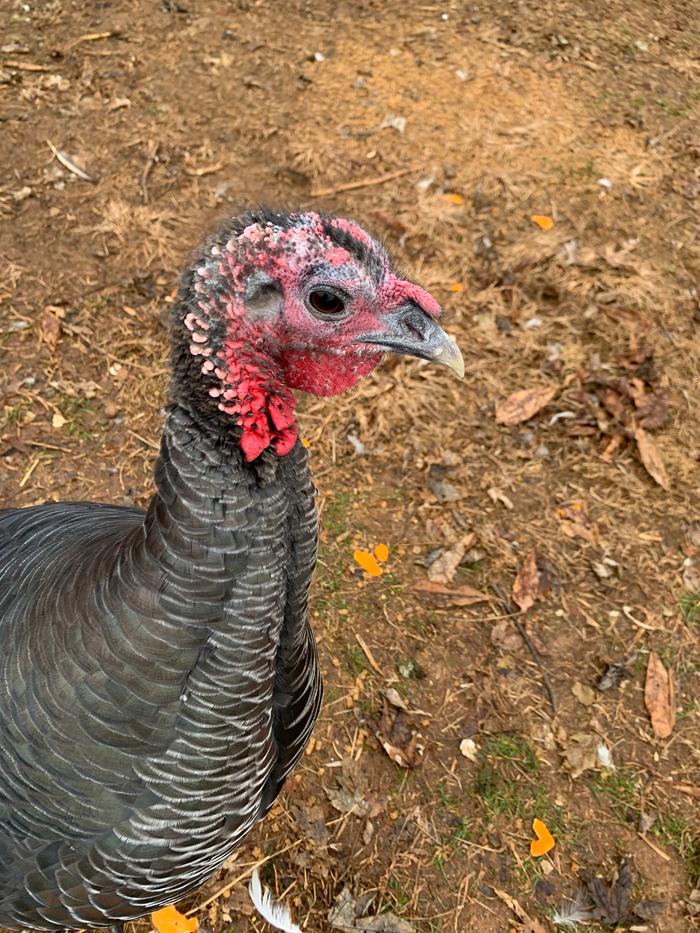 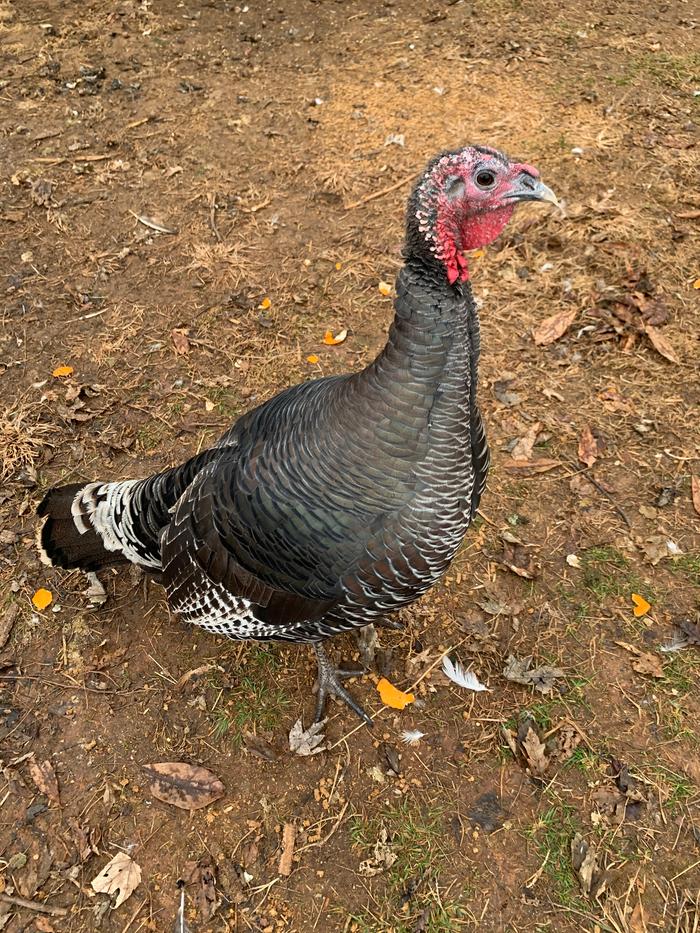 posted 1 year ago
One of my Bourbon Reds was what we somewhat jokingly called our gender fluid turkey.  It wasn't as big as the definite toms, but was considerably bigger than the definite hens.  Snood and caruncles looked much like the turkey in the photo.  Mine would mostly run with the toms, but never displayed, or tried to mount the hens.  When I slaughtered it I found a very small testicle.  Like not even 10% of the size of the fully developed toms.  And he was FAT.  The gizzard must have had 4-5 ounces of fat, just on it.  The layer of subcutaneous fat was surprising.  Just from the gizzard fat, and excess from the body cavity, and the neck skin I got a full to the brim pint mason jar of schmaltz.

I think he was basically a natural capon.  He had just enough testosterone to grow bigger than the hens, but not enough to sexually develop.
Andrew Mayflower
pollinator
Posts: 432
Location: Northern Puget Sound, Zone 8A
71
I like...

posted 1 year ago
Oh, and my Bourbon Red hens were never very big.  I lost one a few weeks before slaughter unfortunately.  The other one, that I think was slightly bigger, still only dressed out a 7.5lbs.
Andrew Mayflower
pollinator
Posts: 432
Location: Northern Puget Sound, Zone 8A
71
I like...

posted 1 year ago
Here are a couple pictures.  First one is of the "natural capon" while he was still alive.  Probably from a couple months ago.  Second picture is showing that fat layer I was talking about.
Turkey-live.jpg
Turkey-fat-layer.jpg
Erica Cawood
Posts: 21
3
posted 1 year ago
That’s pretty interesting. How old were the turkeys? I hope that’s not the case with Olympus because I really don’t plan to eat him/her and that’s really confusing lol. Forever sexually immature. Between that and attacking my poor duck, he/she is making for one confusing case.
Andrew Mayflower
pollinator
Posts: 432
Location: Northern Puget Sound, Zone 8A
71
I like...

Erica Cawood wrote:That’s pretty interesting. How old were the turkeys? I hope that’s not the case with Olympus because I really don’t plan to eat him/her and that’s really confusing lol. Forever sexually immature. Between that and attacking my poor duck, he/she is making for one confusing case.

I'm pretty sure they were right around 34 weeks old when I slaughtered them.

My big toms were in the high teens for dressed weights, for what it's worth.

If Olympus is like mine, and is basically a capon, it would be best to cull him.  Unless you just want to keep him as a pet.  But I'd bet that he won't live as long, if for no other reason than the excessive fat he'll be putting on, especially internally around his gizzard and heart.

Erica Cawood
Posts: 21
3
posted 1 year ago
I had to look up what a capon was.. do you know of any way to determine if that’s what Olympus is a side from culling? I got them mid summer I believe.. would he/she show signs either way? Looking more male like or something by spring? I don’t think I could expect eggs till spring either way as they don’t lay like chickens do
Andrew Mayflower
pollinator
Posts: 432
Location: Northern Puget Sound, Zone 8A
71
I like...

posted 1 year ago
I got mine in early April.  The hens were laying eggs by October for sure.  And the toms were displaying their tails and developing their snoods by mid-late summer.

I would expect that if it's a normal male that by now you'd be seeing a lot more development (tail displaying, longer snood, more prominent caruncles that also change color with mood, etc).  If it's a hen, you might not start getting eggs until late winter or early spring.  If you want to, other than the feeding expense and risk of predator loss, there's no great reason not to let it keep growing until spring.  It'll get a bit bigger by then too, so if you do decide to eat it there will be a bit more to go around.

How big is it relative to your other toms and hens?  I only have a sample of 2 hens and 3 toms to compare it, but the size difference between them was very significant.  If Olympus is much closer in size to the toms it's probably like mine and a male with very underdeveloped testicles, and should be culled.  If much closer to the other hens in size, it might just be a large hen.  In which case that would be a preferred breeder.

There's no really good way to tell without slaughtering it.  Maybe a vet could tell you, but you'd spend several times what the turkey is worth for that, if they even could without a DNA test or something.

Erica Cawood
Posts: 21
3
posted 1 year ago
Olympus definitely changes color quite a bit.. I only have one other turkey and it’s my little bourbon red with the previously broken leg. And because I have no comparison, I also have no clue if my red is stunted due to her injury in early life. I didn’t even expect her to survive even after I fixed her leg because she had to relearn how to use it and was quarantined until a broody chicken of mine adopted her. So I don’t have much in the way of comparison... after discovering how sociable Olympus was I had plans to keep him/her as a pet rather than food. Not that I’m opposed to eating her if need be  but Olympus gets along really well with my 2 year old daughter. Unless of course she is wearing something shiny 😂
Andrew Mayflower
pollinator
Posts: 432
Location: Northern Puget Sound, Zone 8A
71
I like...

posted 1 year ago
Can you weigh Olympus?  I'd say that if that turkey is over 15lbs at its age it's probably an under-developing male.  If it's under 10lbs it's probably a hen.  In between, well, that'll be hard to say.  I'm basing this on the bird being 4.5 months old and guessing on how big mine were at that age.  For an 18lb dressed weight my toms were probably in the 25-27lb range for live weight. The hen was probably no more than 12-13lbs live weight.  And that was at 7.75 months old.  So I'm assuming your birds should be about 13-17 lbs for a tom and 7-10lbs for a hen at 4.5 months old.  But that assumes they're growing about like mine did, which is a big assumption.

My turkeys would go after anything shiny too.  I had to take off my wedding ring when I'd go into their area or they wouldn't leave it alone. They'd go after zippers, metal buttons, etc too.  They also loved to pull on shoe laces.  Can't tell you how many times they'd untie my shoes until I just double knotted them.

posted 1 year ago
It looks like a male. Mid-summer... so, about five months then? It looks younger than that. I would expect the snood to be more pronounced by now in a male, but the wattles are very red for a female. Some turkeys take a long time to show their sex. Some females even grow a beard so you can’t necessarily go by that, either. It may be that Olympus isn’t displaying because he’s way low in the boys’ pecking order, or that he’s not producing enough testosterone. Or “he” may be a “she” and you’ll have to change the name to Olive. I’ve been advised that it’s best not to breed a turkey that remains ambiguous with regard to gender past the age where its friends have already disclosed themselves as boys or girls. Maybe he’s just a natural eunuch and all the hens will adore him as a shopping partner. S/he’s a pretty bird, either way.

posted 1 year ago
After my experience with the natural capon/eunuch I'd actually really like to get a bunch of them.  The fat they put on is impressive and you can get a ton of schmaltz off just one bird.  In a lot of ways it's a bad trait that should be culled if a particular tom or hen is throwing a lot of such poults, but if you're going to be eating them anyway, the extra fat production is a good side effects of the lack of sexual development.
Cindy Skillman
pollinator
Posts: 178
Location: Zone 3-4 (usually 4) Western South Dakota, central Black Hills
68
I like...

posted 1 year ago
I’m not sure that apparent homogeneity would be a reproducible trait, if you know what I mean. However you might be able to recreate it by surgically caponizing some of your little jakes.

From what I’ve read, turkeys are easy to caponize, but since they are customarily harvested at 6-7 months, which is on the cusp with regard to their reaching sexual maturity, there’s no point since the goal of caponizing is to cut off the testosterone before it hardens the muscle and fouls the taste (depending on the consumer’s palate, of course). I’m not sure that’s right, though. They start their characteristic male behaviors (strutting, gobbling) and physical differentiation from females way earlier than that. I got my Sweetgrass poults August 8th. I don’t know when they hatched... maybe they were a week old, so about thirteen weeks now. They’re too fast and too many (15) to tabulate how many males and females I have, but I’ve been able to tell them apart (most of them) for quite some time. Therefore it makes sense to me that there’s testosterone pumping already, presumably doing stuff to body and mind long before they’re capable of making fertile eggs. Does that sound right?

I’ve been studying about making capons of cockerels (haven’t tried yet—got no cockerels at present to try on), and apparently the best time is between 1-2 lbs. If you wait much longer, the testes get large and soft/fragile, making it really tricky to get them out in one piece (or at all) and do it without killing the bird. I don’t know, but I imagine the optimal weight for a poult would likely be similar to that of a chicken, or maybe a little bit more. All of my turkeys are too big, but when spring comes and I start getting new poults, I might have to give it a go. Not right away, but once I (hopefully) get good at doing it on chickens.

I guess you can neuter a female too, by removing a bit of Fallopian tube. It’s my understanding that it isn’t necessary to remove the ovary (there’s only one functioning and it’s on the left side in chickens... probably in turkeys too) and that removing it would be difficult. In chickens, spayed females are called Poulards. Without the Fallopian tube, the pullet expends all her calories toward the rest of her body, putting on those yummy layers of fat. Poulards are s’posed to be even tastier (though smaller) than capons.