Dale's Cottage - All of the wood was reclaimed from demolitions

Dale Hodgins
Posts: 9002
Location: Victoria British Columbia-Canada
666
posted 7 years ago
I started this cottage 8 years ago. An injured hand forced me to leave it for a month. Upon my return, I discovered that all of the windows,doors and other stuff meant for the cottage and the house was either stolen or destroyed. Six months ago I returned again after not returning for 5 years or more. I decided it was now or never. The neighborhood has improved and I have a guy living on site full time.
---

Some people who read my add on this forum are going to help finish it in exchange for one year with no rent.

The alder and cottonwood were the diameter of a shovel handle when this began. They are now casting too much shade and I will remove those that are within 25 ft. of the building. The moss on the roof is the result of too much shade.

Some of the plywood was formerly used for signage at demolition sales. Throughout the cottage there are arrows pointing to firewood, lumber and other products from years gone by.

There is no rot. I attribute that to the large overhangs and to ventilation. Mildew, yes, but no rot. 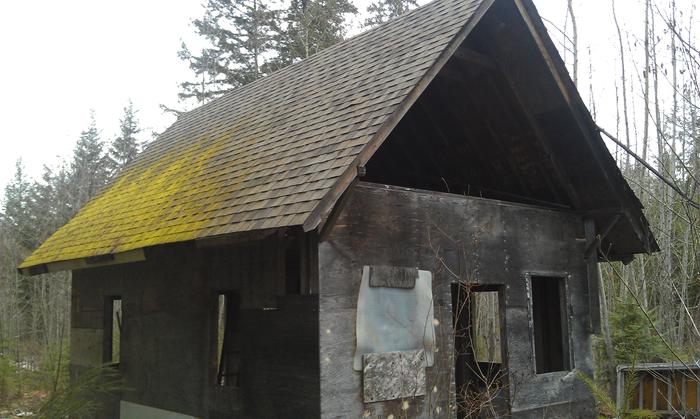 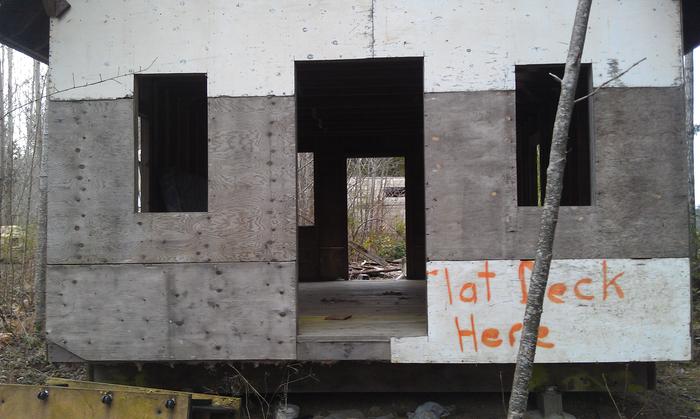 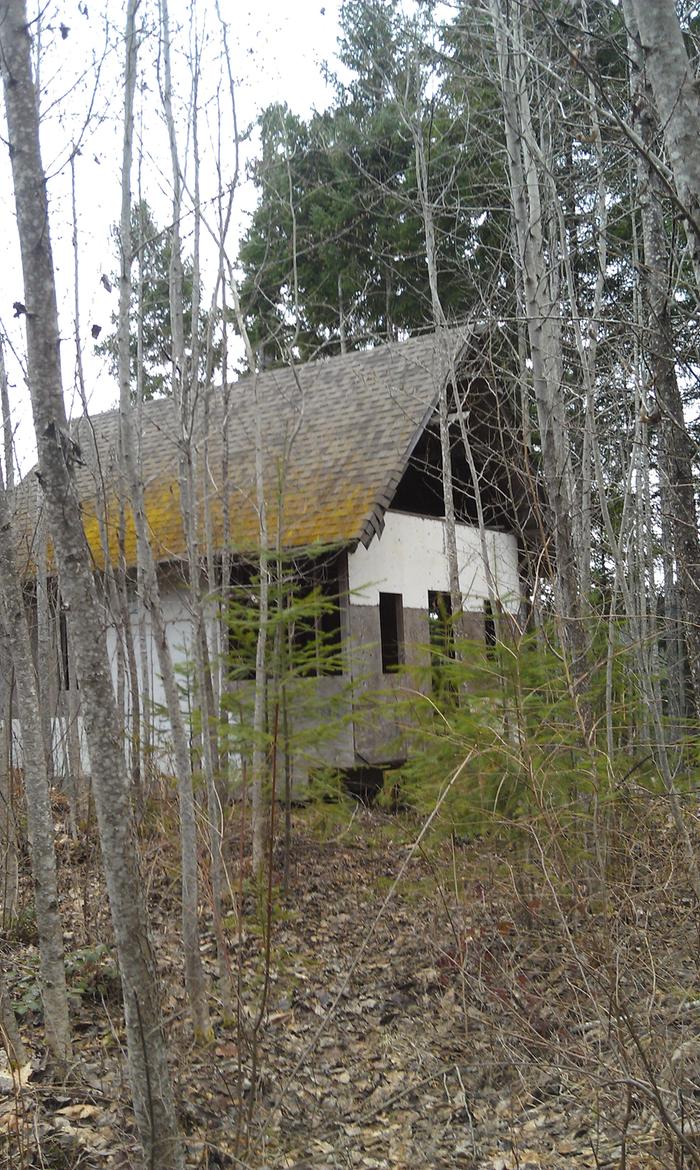 1. The big rock is the largest I have found on the property. I hope to unearth larger ones to put into the living room of the main house. This is the view to the south. The land drops off quite steeply about 40 ft. beyond the cottage.

2. This view to the west is obscured by trees which will soon be cut. An upper deck will be built on both the east and west side of the cottage. The gable ends will be closed in with a generous quantity of glass. If I can find French doors, they will connect the gable ends to the outer deck. Some sort of turret may also be added.

3. This view to the east will also be opened up. The main house will eventually start at about where the old camper now sits. It will run further east and north which is to the left in this photo.
IMAG1212.jpg 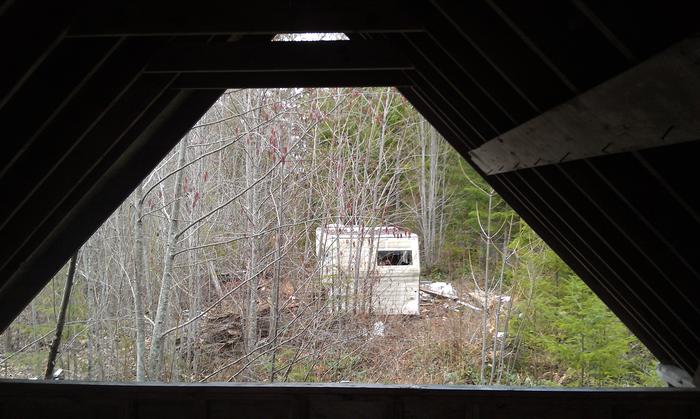 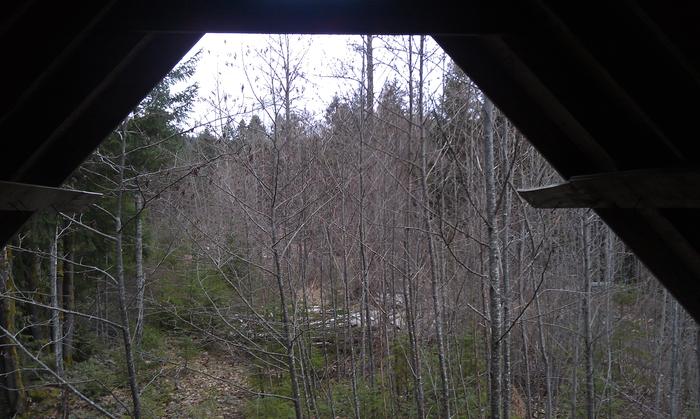 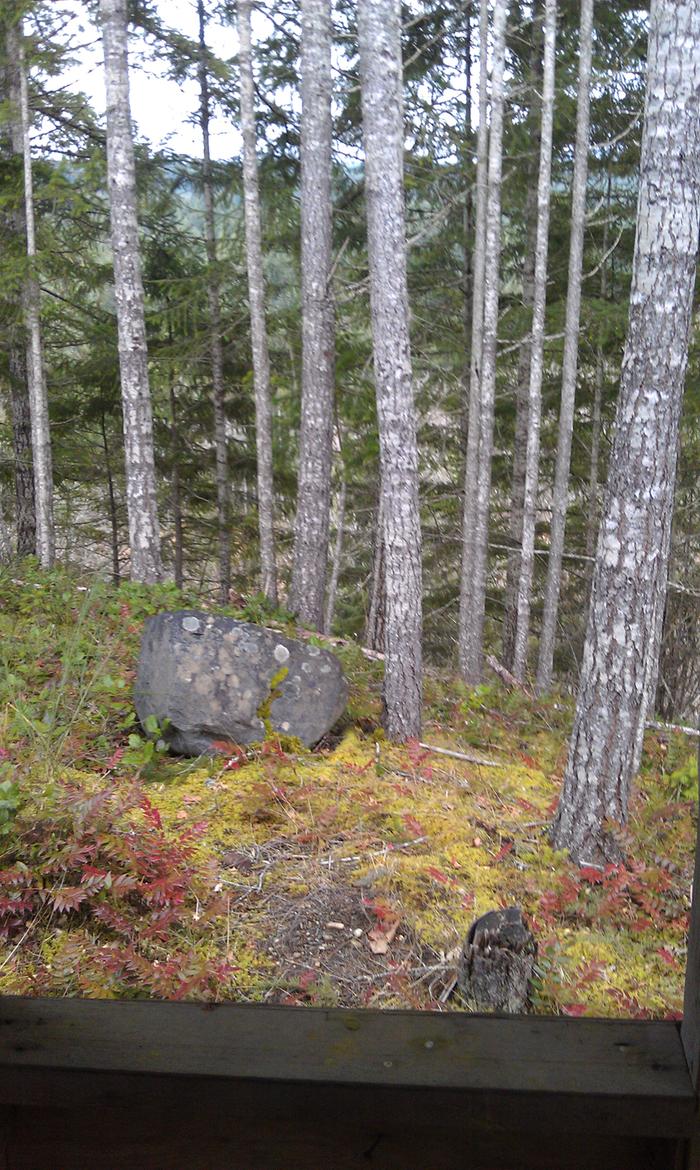 1.This is the view to the north. Most trees will be removed in favor of garden and fruit.

2. This will be the view looking south off the eastern deck.

3. The southern lawn is mostly Salal and Oregon grape. There are fir trees to the south in this spot and these plants stay about 1 ft. tall without pruning. It hasn't changed much in 10 years. The perfect lawn. I won't let anything graze this area since recovery would be painfully slow. There are quite a few shaded areas on the property which produce shiny green undergrowth that grows rather slowly. Foot traffic will be limited to pathways in these areas. I have been to many parks where similar terrain has been badly trampled. Recovery can take decades. We get lots of rain, so sunny areas have very quick recovery and growth rates. Some of my young cottonwoods have grown 50 ft. in 12 years. During that same period, shaded Oregon grape has grown 3 inches. 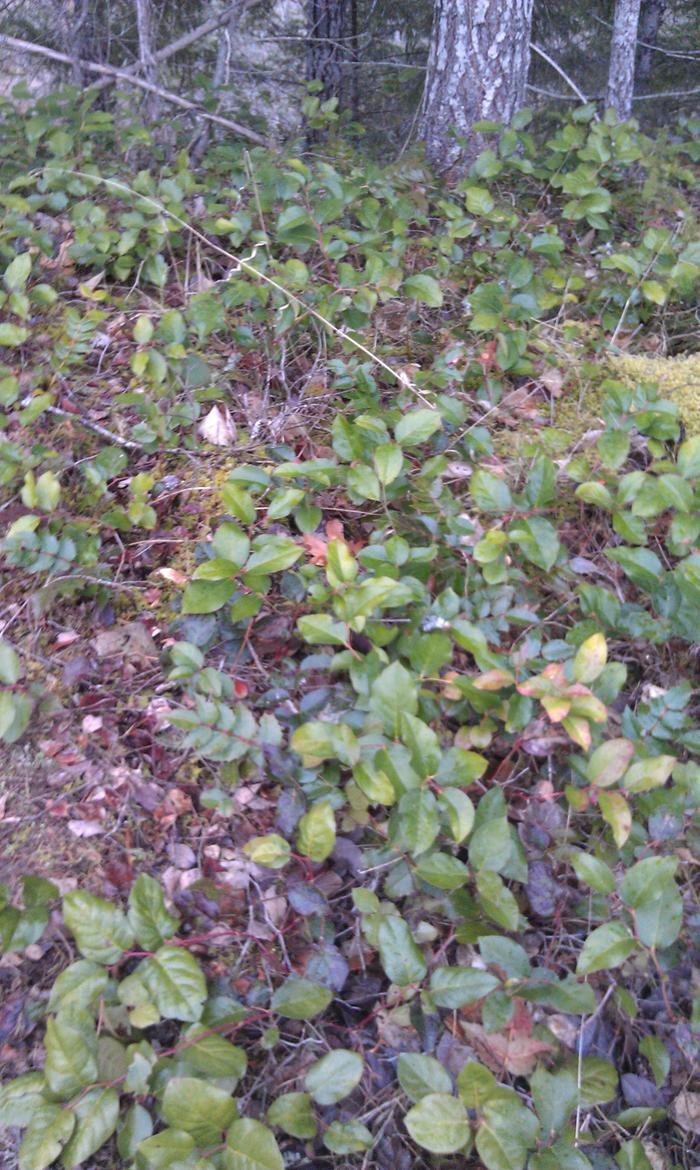 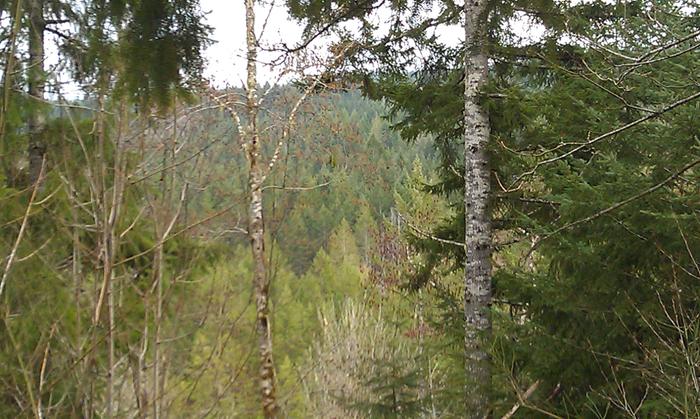 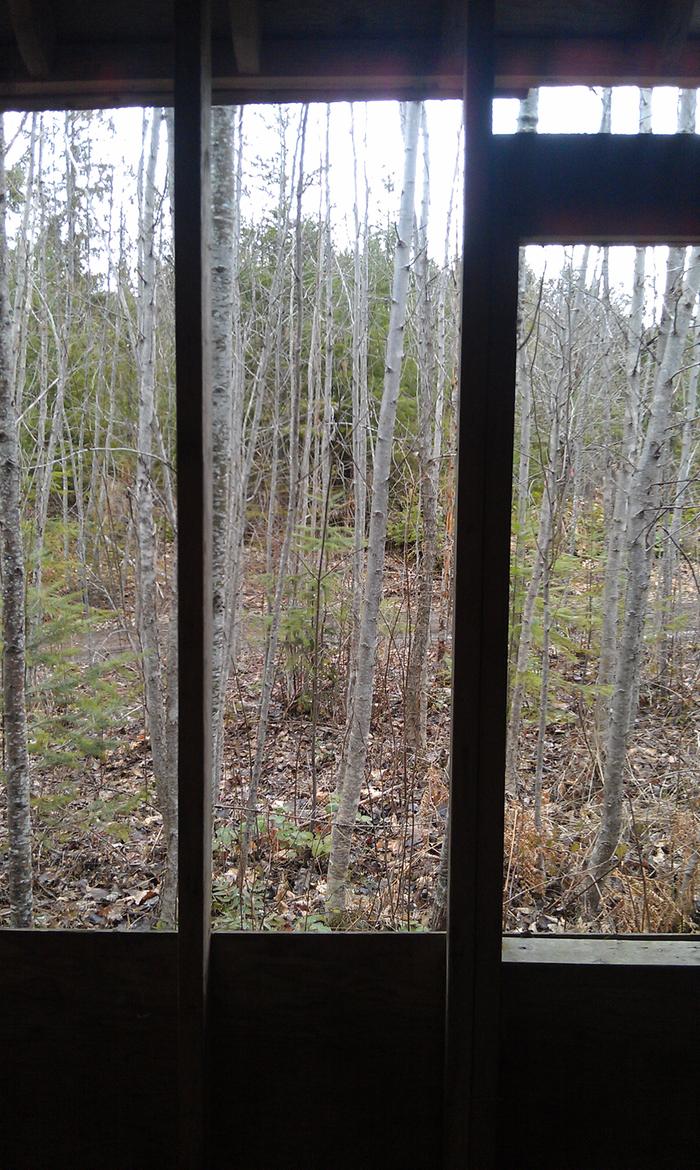 Brian and Marie are a couple who I met through the forum. They will soon occupy the cottage. On Saturday we talked about storing stuff in the cottage. By Sunday afternoon the plan had evolved somewhat. I had told them that it was 300 sq. ft.
It is actually about double that, since there's a second storey. After seeing this, Marie became quite attached to the idea of making this the main residence and their camper van the secondary unit.

So we will build a rocket stove and scrounge up some shelving, furniture and a rudimentary kitchen.


Brian and Marie, say hello or put in a photo and wave at all the people.

The waterfall is visible from the front "yard". Most of this area is covered with salal and Oregon grape.
IMAG1230.jpg 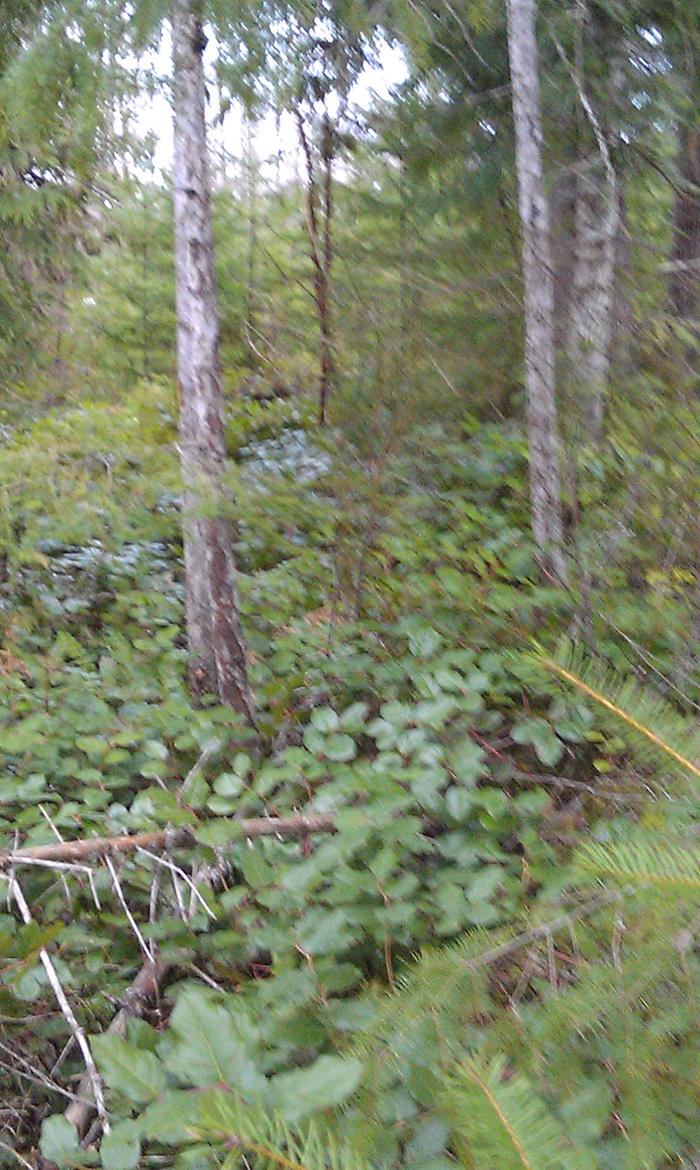 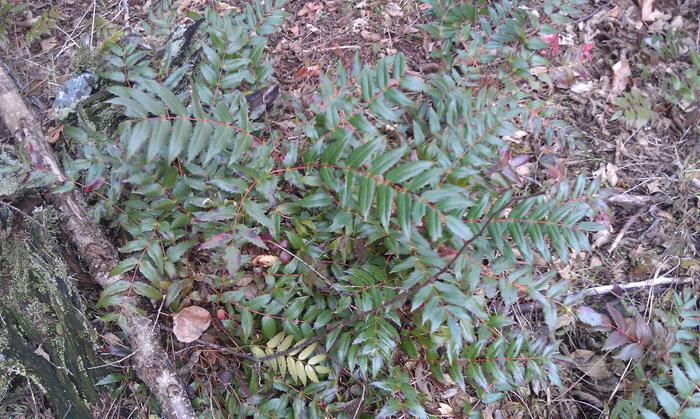 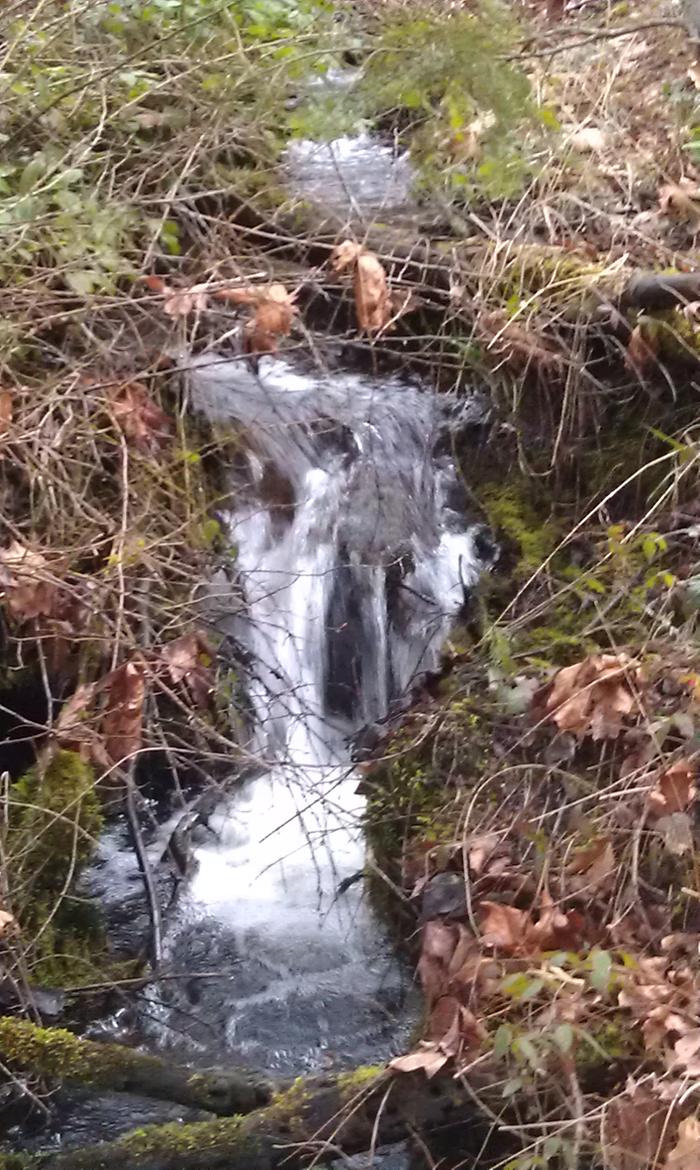 Dale Hodgins
Posts: 9002
Location: Victoria British Columbia-Canada
666
posted 7 years ago
The cottage was once occupied by a pig. He left garbage in several places around the property.

This crappy old camper arrived courtesy of a squatter.

A couple years back, l told my younger brother that he could live in the cottage. Instead, he constructed this plastic tarpy contraption and lived in it. It is 10 feet from the cottage. Nothing weird about that.

Clean up of garbage brought by squatters and of destroyed materials that I brought here to build a house with, will be ongoing for at least a year. Some of it will be used as fuel and some will go to the dump. Broken glass and pottery will be mixed into concrete. A van, a car,a boat and a crane disappeared completely when scrap metal prices were high. 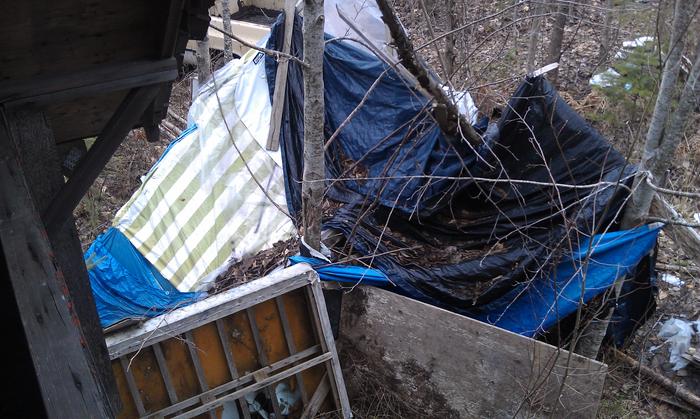 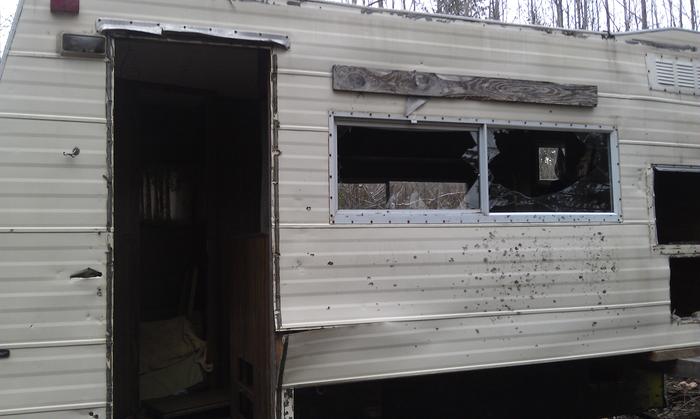 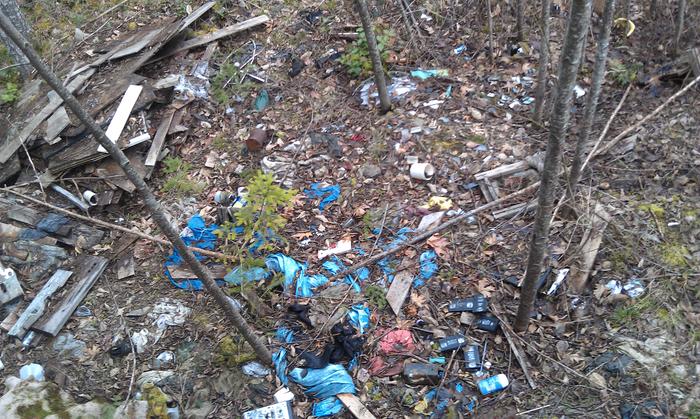 Dale Hodgins
Posts: 9002
Location: Victoria British Columbia-Canada
666
posted 7 years ago
1. I found four of these windows which will work in the downstairs.

2. These t&g doors will work in the kitchen.

3. This commercial sink will be installed in a public picnic shelter built into the south facing slope not far from the cottage. 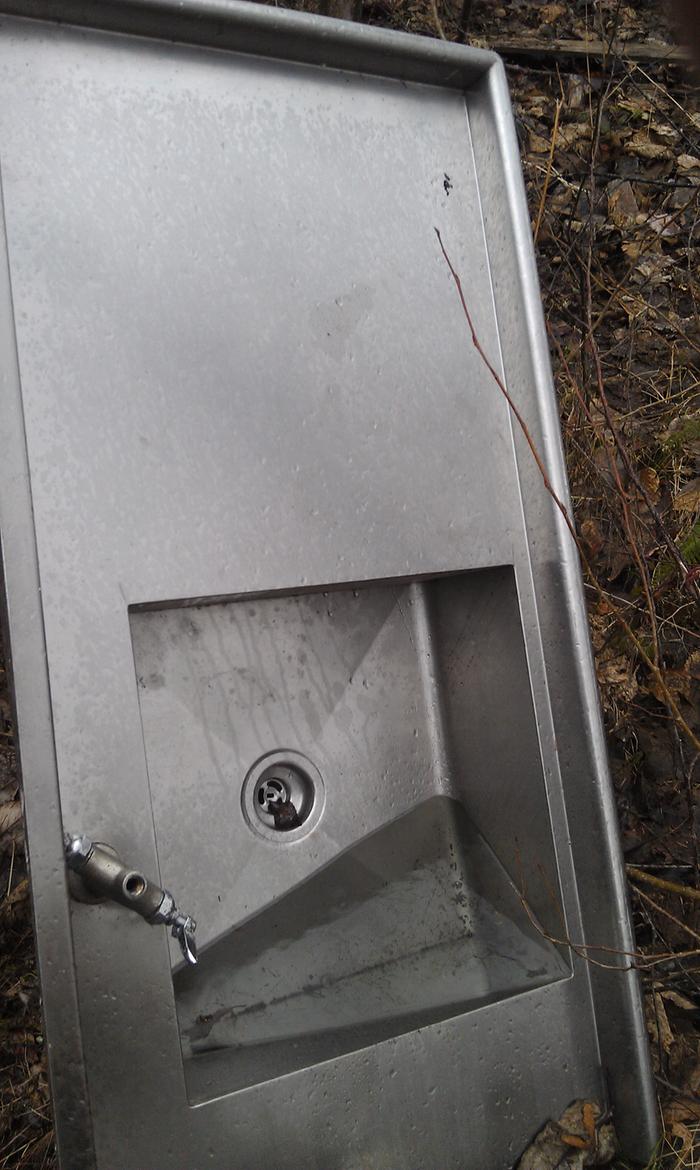 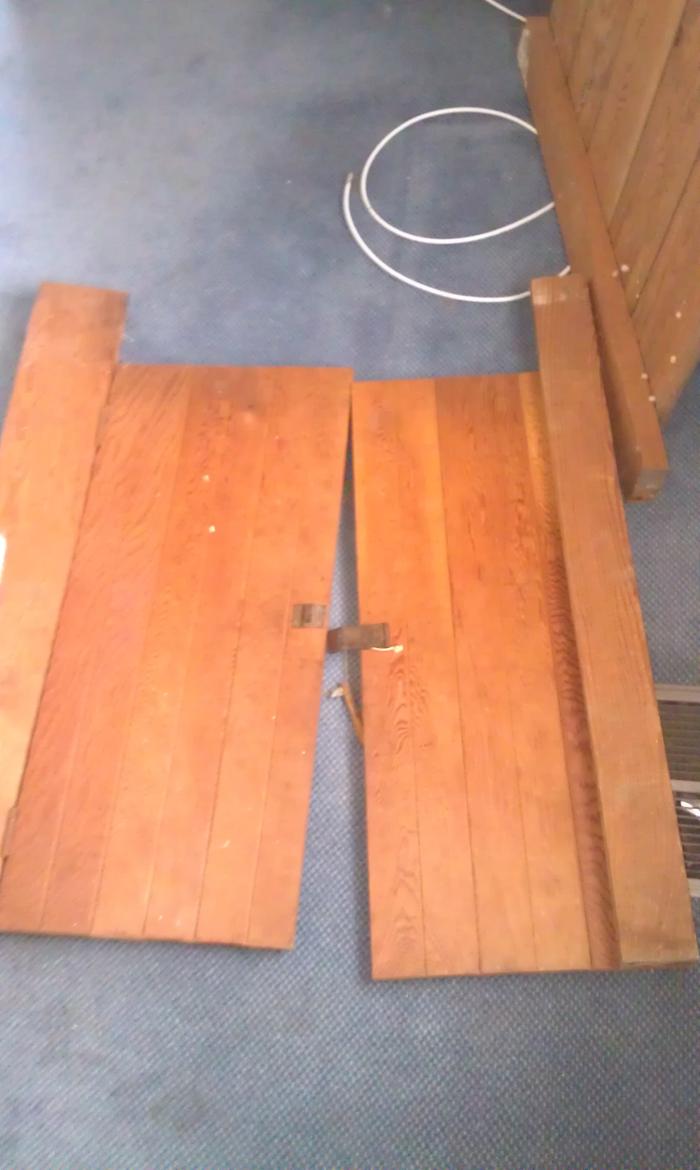 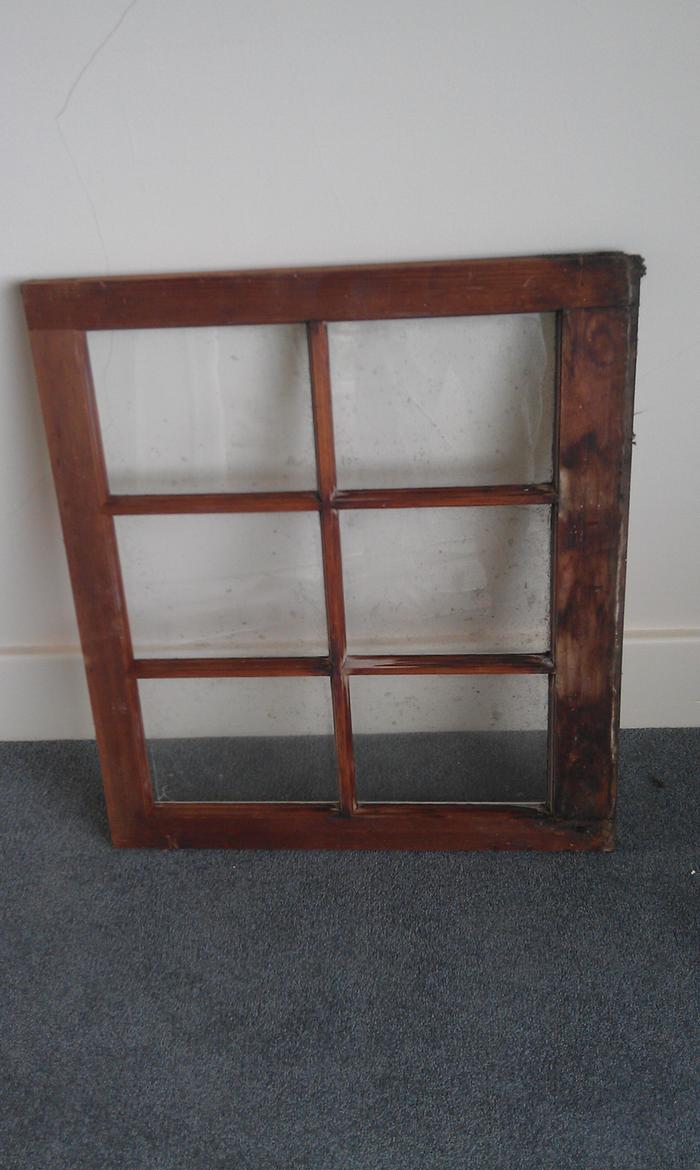 I found some neat stuff today. Have a look. Got a big building move and tennants left things. I'll post photos in this thread, of anything that looks like it would work in the cottage. I'll bring approved items to the cottage soon.

There's a whole lot more good stuff posted in the frugality section on the Free Stuff thread. Just started this today, so may discover other stuff. I've heard that some people part with money when they want stuff. I've pretty much evolved past that.

This old kitchen table has a handy drawer. The top is a little worn but I found 8 prefinished oak tiles that could give it new life.

The coffee/ end table is in nice shape.

You don't have to be stuck with any of this stuff. As I happen upon better stuff, some of this can be moved to greenhouse or outdoor use. This stuff would simply make it a little easier in the beginning. 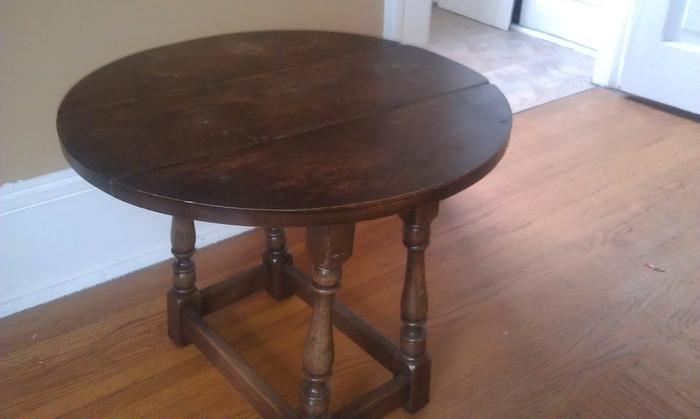 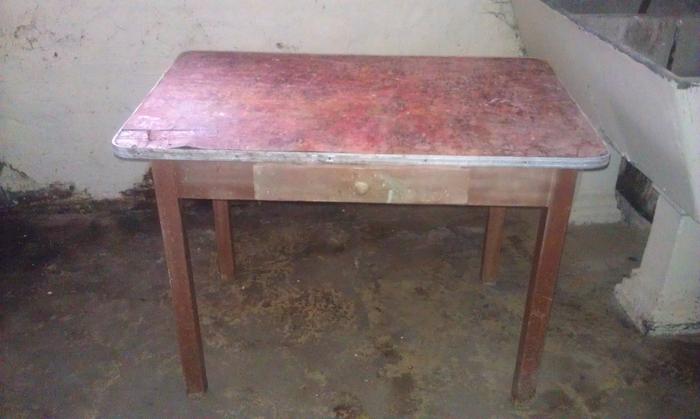 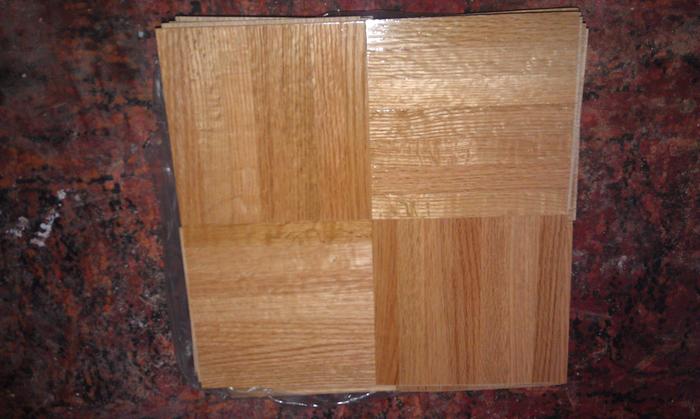 The fold up table would be handy in the upstairs and could be stowed against the knee wall when unwanted.

The hazmat people did needless damage to this end table. They also scratched up the oak floors of the mover house. I'm lobbying to switch companies over this sort of thing. 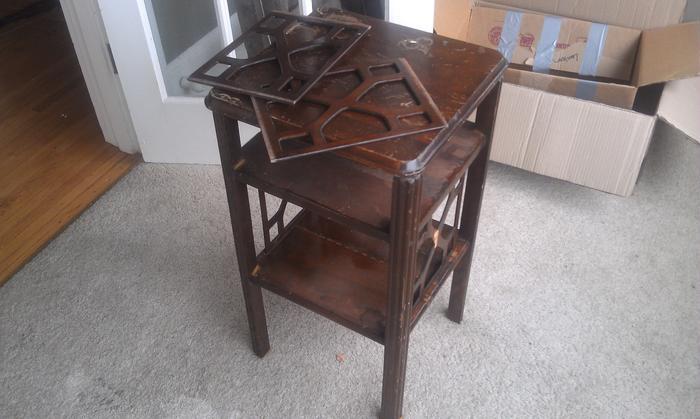 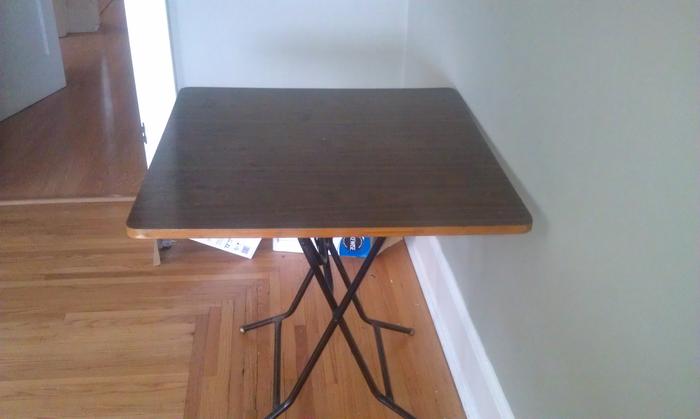 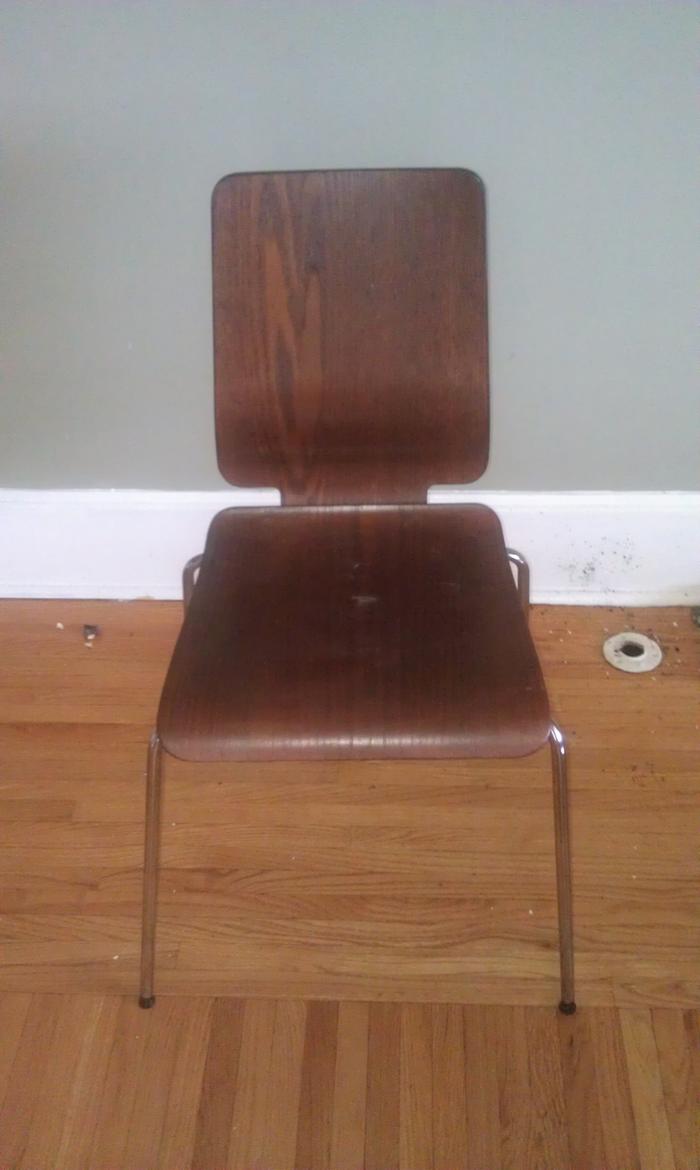 Dale Hodgins
Posts: 9002
Location: Victoria British Columbia-Canada
666
posted 7 years ago
The metal shelf will look good on the deck which hasn't been built yet.

There are several other shelving units to be removed from the basement. 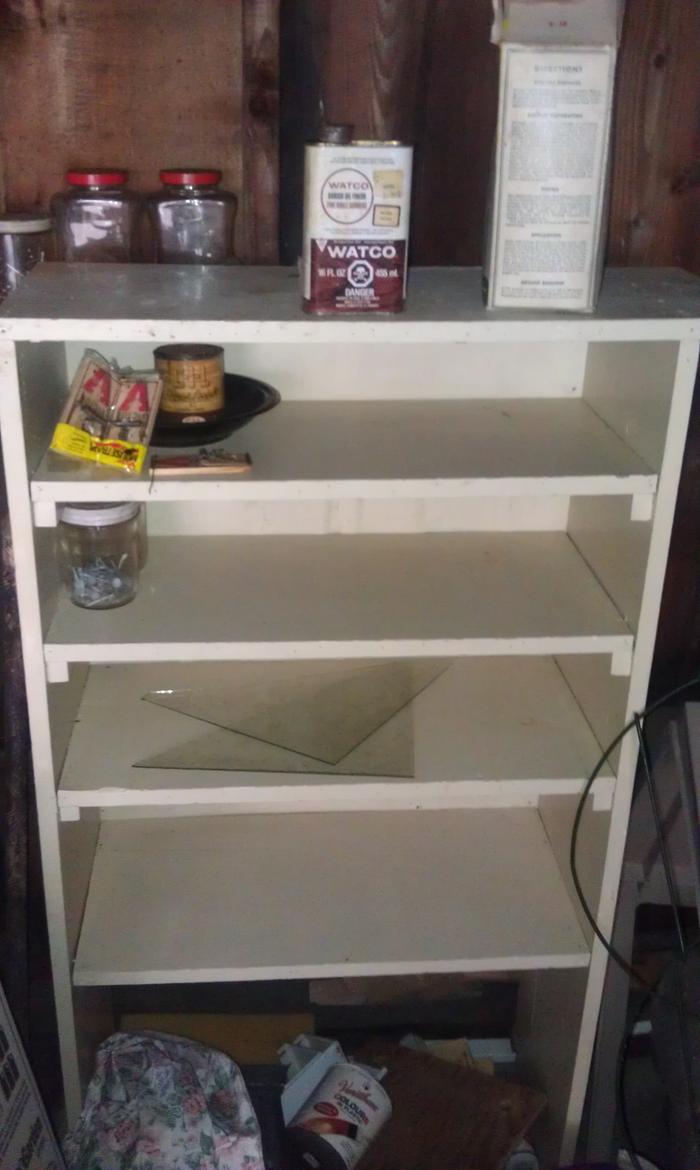 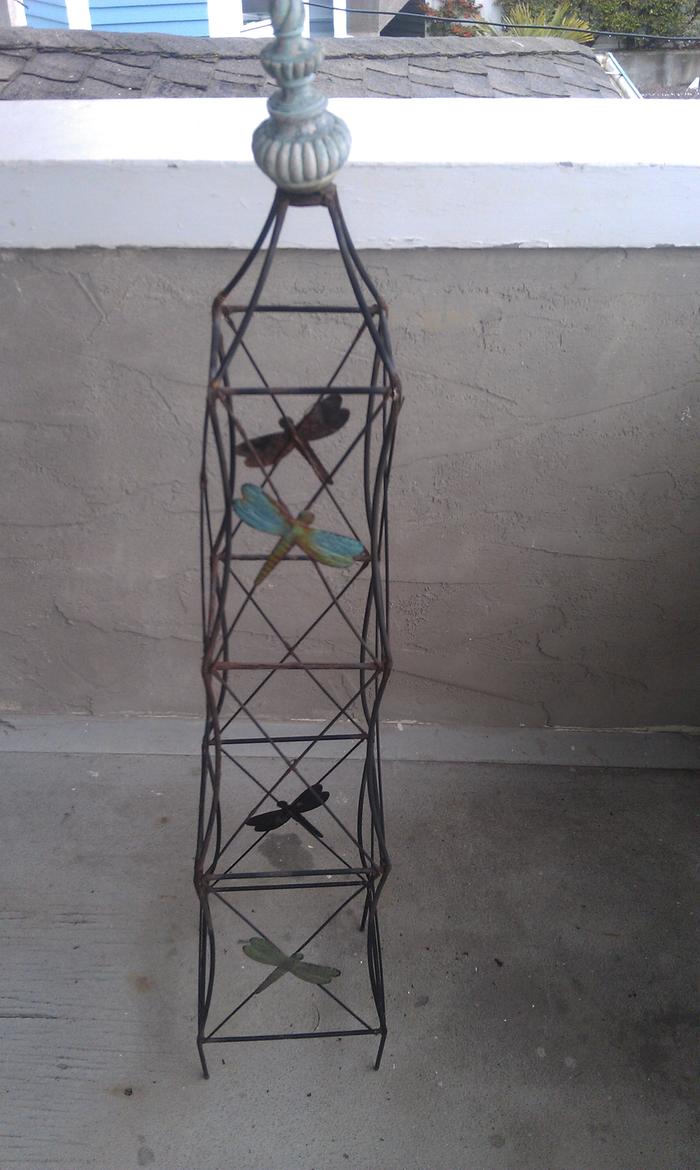 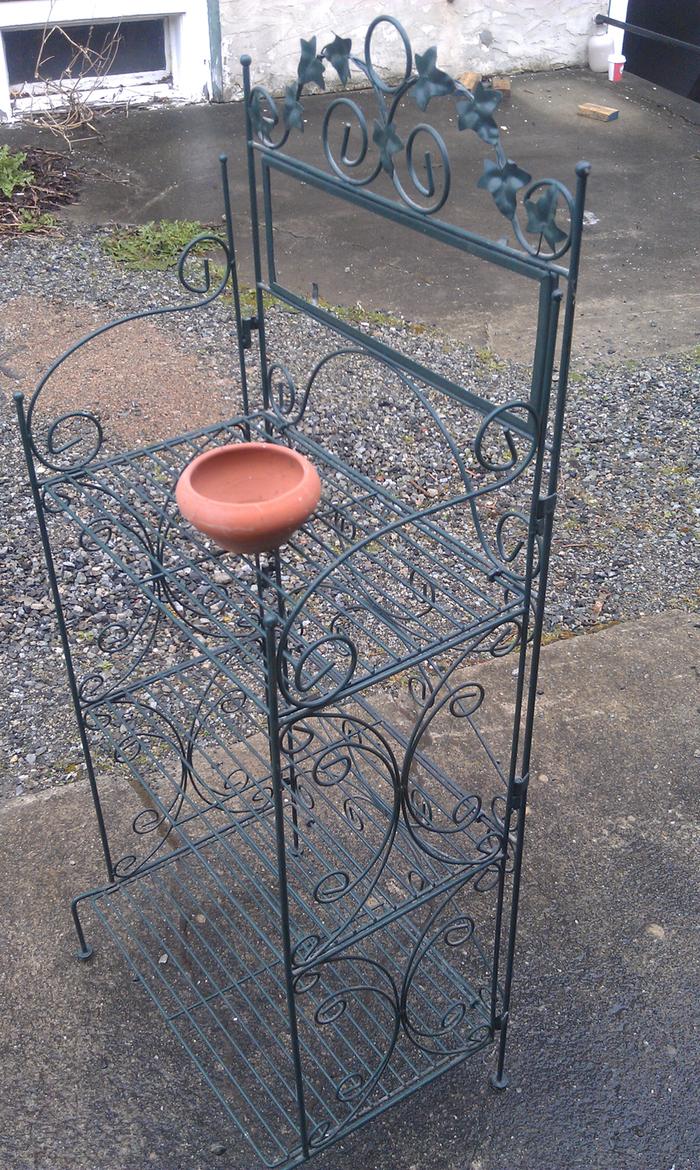