Owen Davies
Posts: 14
2
posted 7 months ago
I am starting this thread mostly just so I can't lose my records for my garden (so I know where I planted what and when). I would just use plant tags, and I did order them for this year, but I cannot find them now. I am putting this thread in the "asian natural farming" section since I mostly use the Fukuoka method. Anyway, Here are the things I have done so far:
I made soil blocks to get a head start on peppers (pic1.jpg). A maps of these three trays are in pic2.jpg and pic3.jpg.
I transplanted out the peppers this past Sunday (peppers.jpg, sorry about image quality). Here is a list from back to front:
Kitazawa Shishito - 2 rows and 6 rightmost cells in the next row
rareseeds.com Arroz con Pollo - leftmost two 2 cells of that row and rightmost 5 of the next row
Southern Exposure Carolina Cayenne - leftmost 3 cells of that row, another full row, and rightmost 4 of the next row
Southern Exposure Chervil  (not a pepper) - 3 leftmost of that row
Southern Exposure Doe Hill Golden Bell - 2 full rows and 2 rightmost cells in next row
The rest are a mystery because I dropped my seed tray at one point. 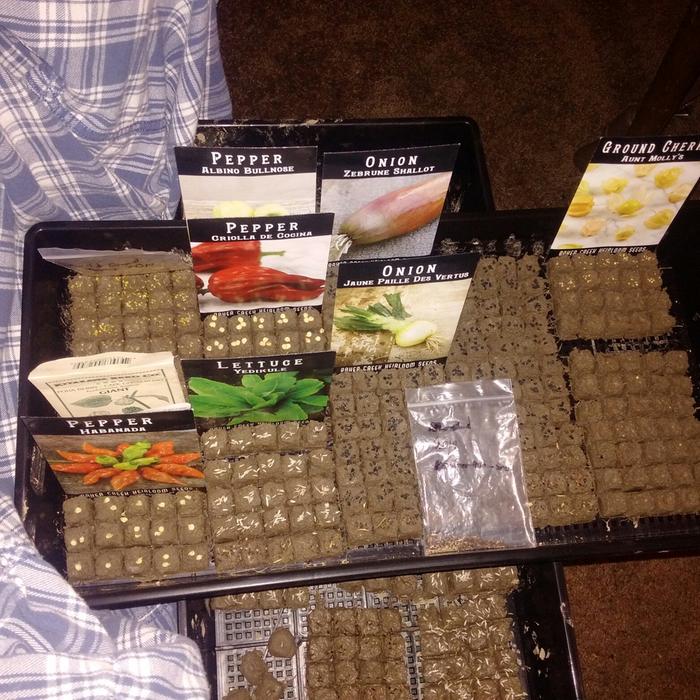 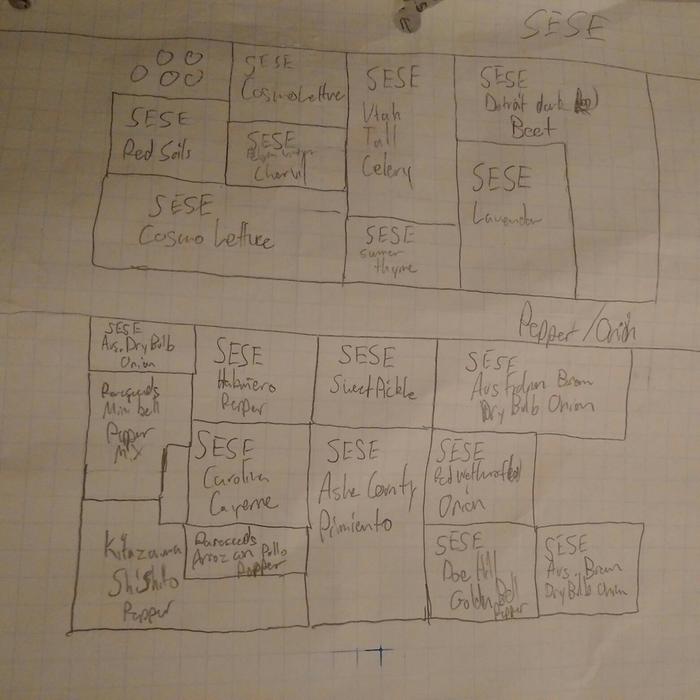 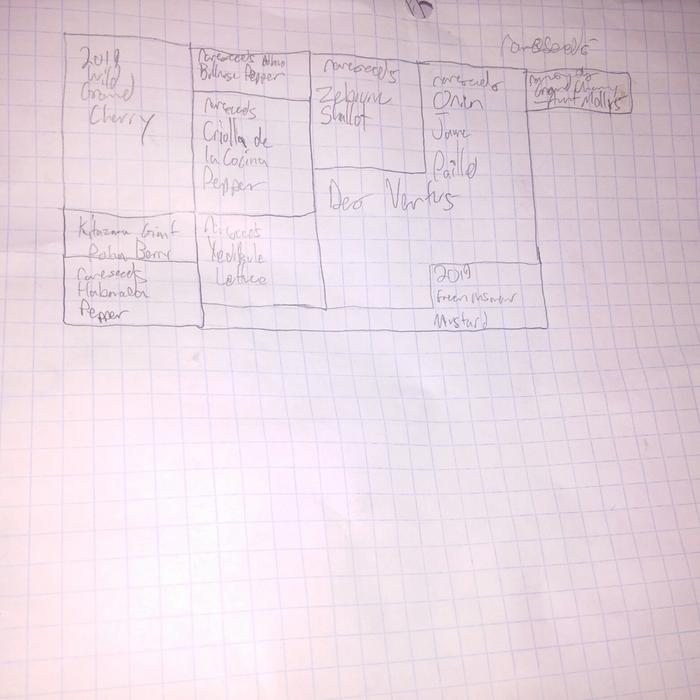 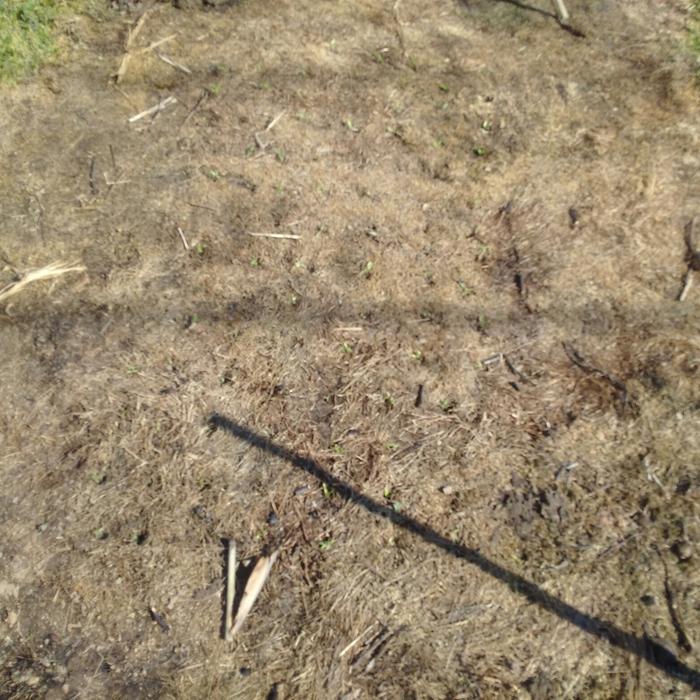 Owen Davies
Posts: 14
2
posted 7 months ago
I should mention that I reserved some ashe county peppers from being planted out and instead put them in 2" soil blocks. They definitely benifitted from the extra root space as a lot of the other peppers were a little rootbound by the time I transplanted them. I will keep them inside for another week or so and see if the benefit from the room temperature air and controlled light conditions. I don't have much capability to grow all of the peppers in the larger 2" blocks, which is why I trialed only a few of one variety. Despite the fact that these grew better, I think I will keep with the smaller blocks next year since maintaining the larger blocks is more work. I will also try direct seeding this variety to compare how that holds up. I suspect that in my climate, shishitos, ashe county pimientos and carolina cayennes would work best as direct seeded peppers in my climate due to fast germination and early seedling vigor.
2inchblocks.jpg 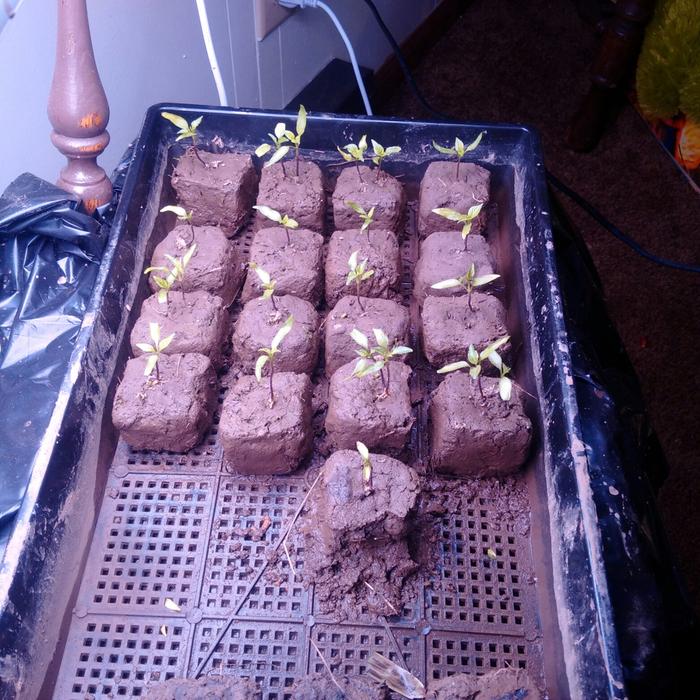 Owen Davies
Posts: 14
2
posted 7 months ago
Thyme and lavender grow very slowly from seed for me, so I think it was a good idea to put them in blocks (top right and bottom left, respectively). A lot of them died promptly after germination. I think that they do not like the clay soil that I have, but I would rather not bother with pots if they require that level of care. Also in the picture are bull's blood beets (from kitazawa) (top left), celery (bottom right) and chervil (left border). These had been planted out a week ago or so.

The rows were all about 4' long with 1' between each row. I plan on thinning them to 2-4 plants per row. These were all shade-tarped over for a week, then planted into, and will be shade tarped over for another week except for bed 3, which will be left exposed, and was only shade tarped over for the initial week on the near half. I surface sowed melons into 1" weeds last year, and that worked just fine, but I would rather there were less weeds so that the melons are easier to see this time and there is less moisture retained by weeds so that there are less slugs. I may cut holes in the tarp to let the melons grow through to fix both of those problems.

I will select them primarily for flavor, slug resistance, and earliness. I will also only save seeds from melons with a shelf life of at least a week. I may give bonus points to compact plants, but I will more likely be satisfied with pruning the plants to keep them roughly 1-2 square feet.
celeryandfriends.jpg 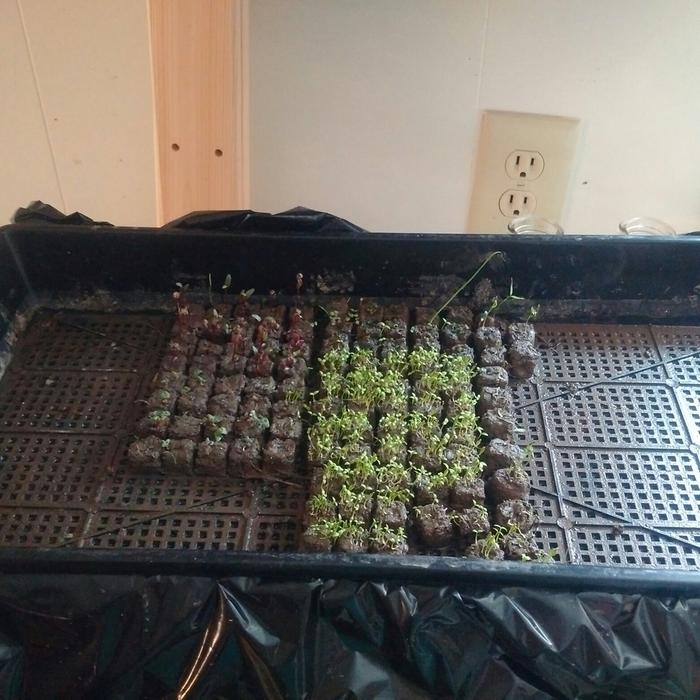 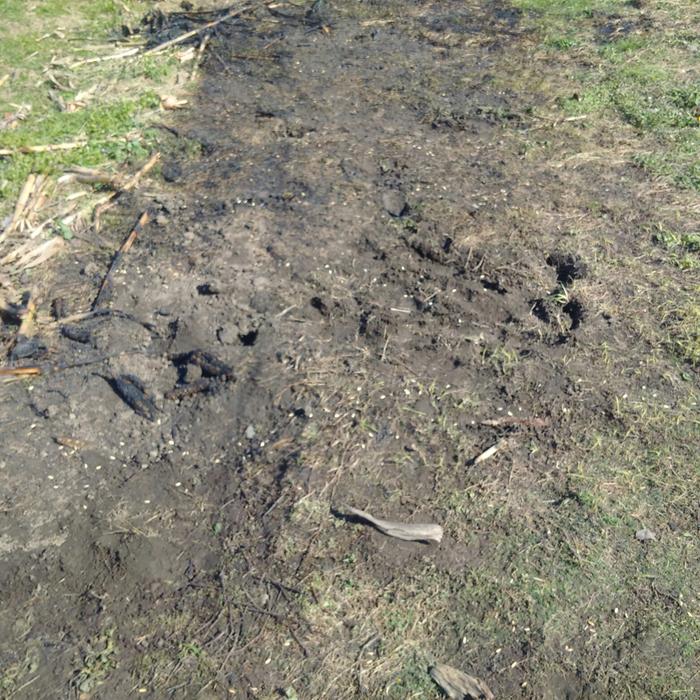 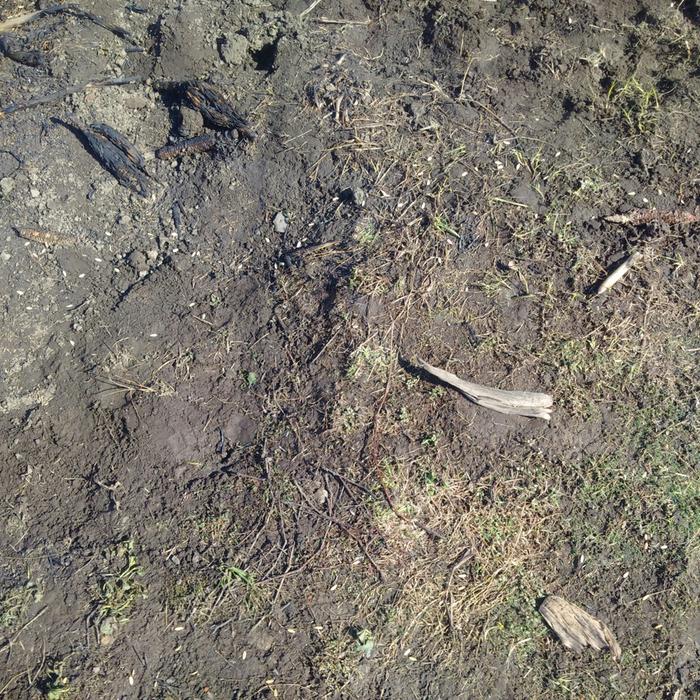 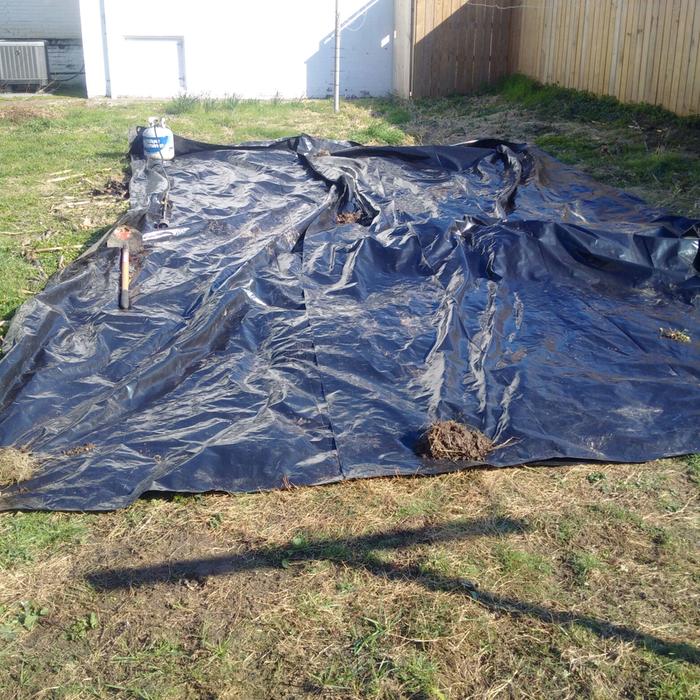 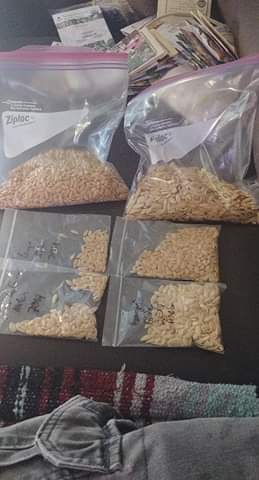 Owen Davies
Posts: 14
2
posted 7 months ago
I prepared my seeds for some staple crops by soaking them in quart plastic bags with excess water for one hour. In reading order, they are lofthouse sunflower, bloody butcher dent corn (2 bags), wisconsin crenshaw melon seeds, miami ohio pole beans, and scarlet runner beans. I planted these in such a way that the beans should trellis up the corn and sunflowers. They were all broadcasted on top of the ground, and some of it was mulched with grass clippings, but I did not have enough to mulch all of it birds can't eat all of the corn and beans (sunflowers I will have to see about). I reserved more than half of my seeds for the corn, beans and sunflowers.
I also transplanted out the rest of my ashe county pimiento peppers that I have been growing in modules. These are 2" blocks. I kept them inside for a week or two longer than the others becuase there was a risk of mild frost. About half of the peppers planted out earlier died from either frost damage or transplanting, but it was more to do with location than variety (though shishito seems to have frost hardiness characteristics as it was completely unphased).
I planted out some collards that I sprouted in soil blocks (they don't germinate well in cool weather, though they grow just fine). I prepped the bed with a weed burner, though the would have done just fine without bed prep. I just don't want to pick out as much grass from my harvested vegetables. It was quite dry so I watered these in.
My lettuce has been doing well. In the picture are red sails and yedikule. They are doing quite well. I transplanted them due to cold weather when they went out, but they were fine with the mild frosts that they went through. I also planted cosmo lettuce, but I forgot about it and so I killed it by accident when prepping the melon bed. I resowed that veriety by direct seeding in another location. It appears to have come up in about 3 days.
Lofthouse kale has been in the ground for about a year now. I started out with around 20 plants, but most did not last the winter, and my favorite one died from soft rot. One of the other two plants also had soft rot, but maggots ate it out before it could become a problem. That plant is just hollow with cracks in the stem now, but it is doing fine. The leaves definitely improve in flavor in spring.
I decided to reserve two modules of ashe county pimientos to put in pots and grow indoors over the winter.
Last year, I decided to see if I could overwinter kohlrabi and one early purple vienna from southern exposure made it. I think I'll grow these in the spring if I want seeds next time because it doesn't work all that well to get seeds from fall planted ones.
Senposai and rutabagas overwintered exceptionally well here in zone 6, West Virginia. The senposai stayed green for longer than any other plant except for mache, even out of wild plants. I tried a few varieties of rutabagas, and most of them overwintered just fine, but when the heat came in spring, most of them got soft rot and fell apart. Honestly, the best way to save them would probably have been duct tape seeing as though they did just fine as long as they were physically attached to the rotting plant. The rutabagas that did well were southern exposure's american purple top, I believe. I cut a little section out of one to see if there was soft rot, and there was not, but the flesh did separate a little bit, and had fine cracks everywhere. Hopefully it will heal back up in time for the plant to produce seeds. I left three senposai plants out of the 40 or so I started with. I am introducing more seeds next year for more genetic diversity, though I should probably get a source in addition to kitazawa for senposai so that I can have a stronger population.
IMG_20200422_162820.jpg
IMG_20200422_182758.jpg
IMG_20200422_182808.jpg
IMG_20200422_182817.jpg
IMG_20200422_182824.jpg
IMG_20200422_182832.jpg
IMG_20200422_182842.jpg
IMG_20200422_182856.jpg
IMG_20200422_182909.jpg
IMG_20200422_182927.jpg
IMG_20200422_183021.jpg
Owen Davies
Posts: 14
2
posted 7 months ago
I visited my garden again today, and it looks like the birds ate all the melon seeds I can see. Hopefully there are a few left. Though melons can grow in the current weather, it seems that they are taking their sweet time to sprout. The melon seeds that I tried to compost still appear to be completely viable, however. I am getting 50 crenshaw seeds off of ebay, and in order to not take any risks, I will plant them in soil blocks to transplant just after they sprout. I have also been taking the same policy with everything else now that the best seeds are all unavailable or expensive. To that effect, attached are the seeds I have started in modules. I also broadcasted some chickpeas I soaked for an hour to see if those will come up and some black beluga lentils. I also transplanted out illinois buldleflower I just sprouted in blocks as well as brocolli that I started in blocks, froze enough to kill a few seedlings, then let recover for a day. I also planted out some fruit bushes and potatoes.
IMG_20200425_234339.jpg 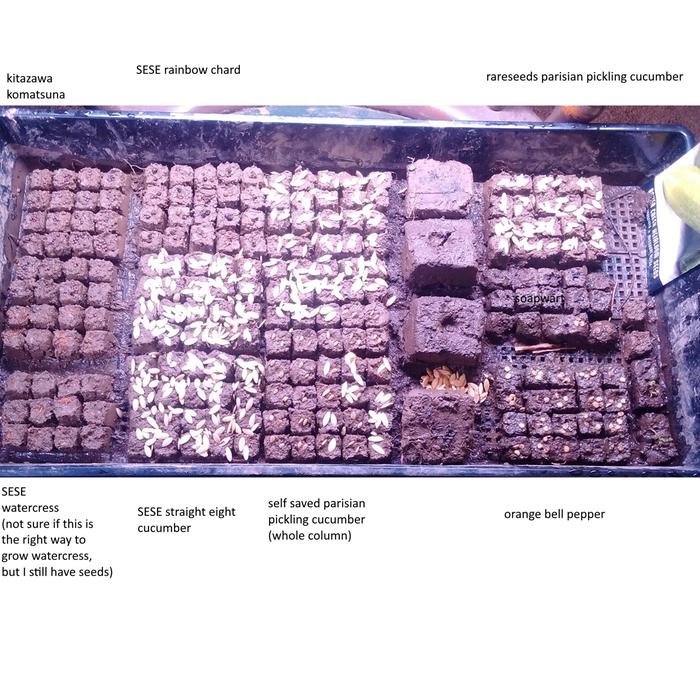 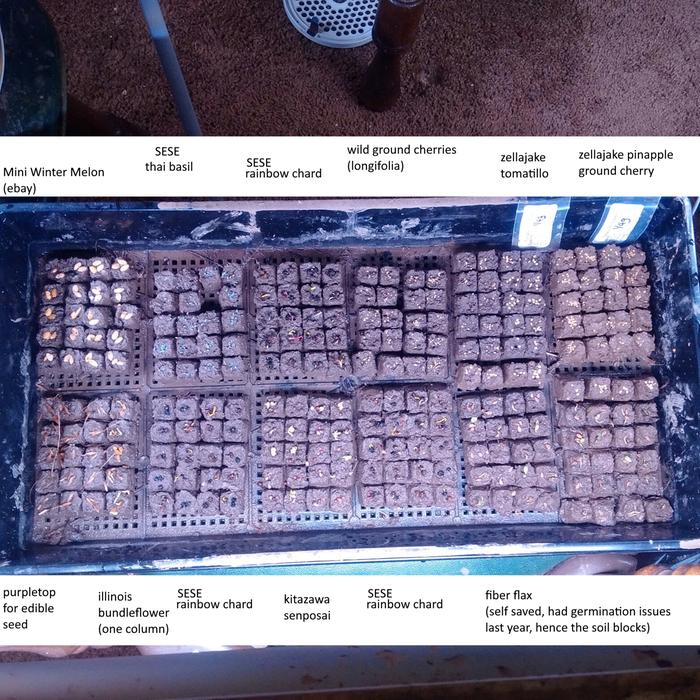 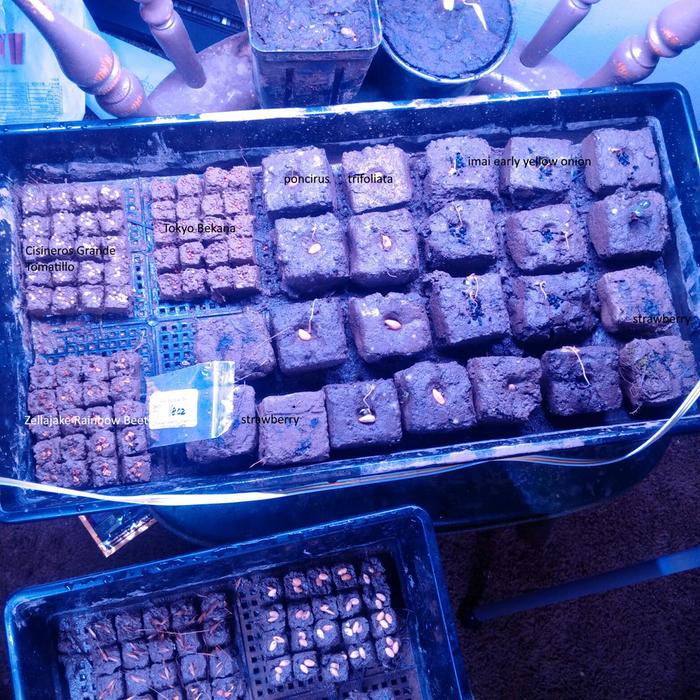 Owen Davies
Posts: 14
2
posted 6 months ago
5 days have passed. These should all go out on Saturday if all goes well. I also got a proper seedling watering can and that helps immensely with watering. Seedlings seem to benefit from overhead watering. Some water drips down out of the trays and onto the floor, but I will fix that next year if at all. I got some last minute seeds from a couple different sources for things I forgot or that failed already. I forgot to get celeriac earlier this year, but it was out of stock at the places I was already buying seed from.
IMG_20200501_010218.jpg 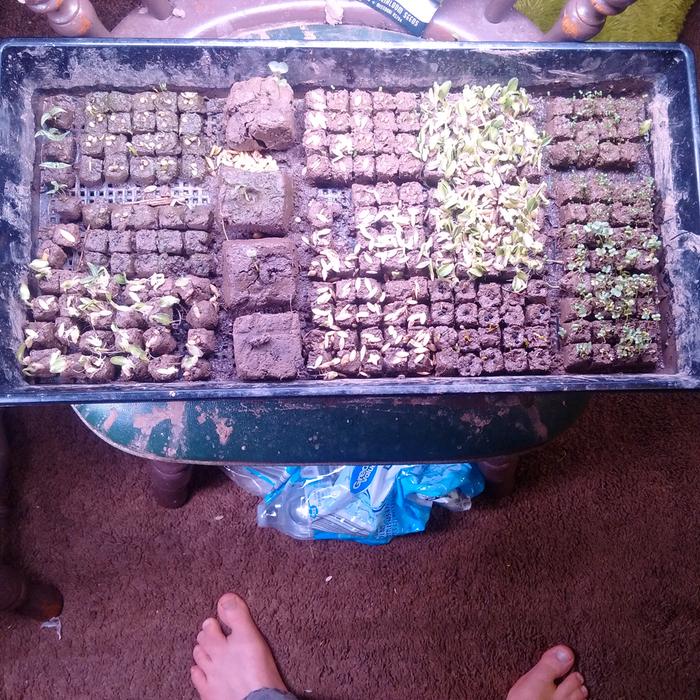 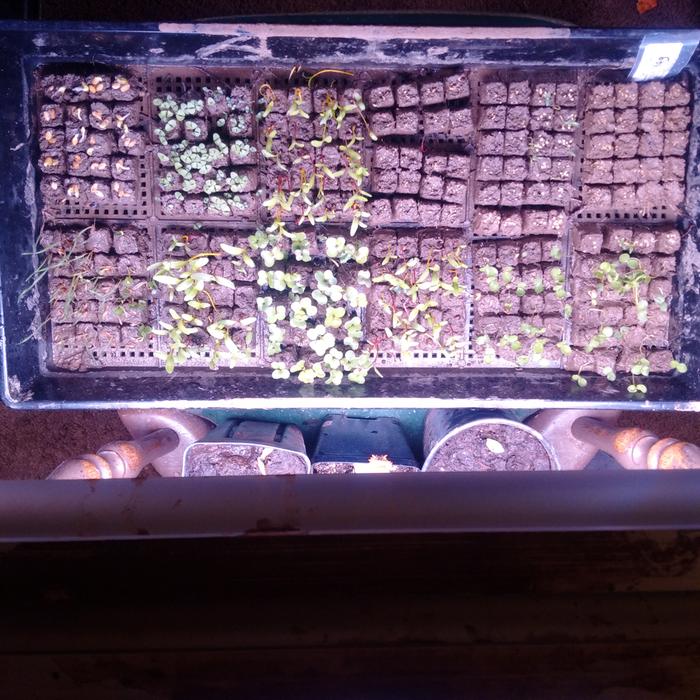 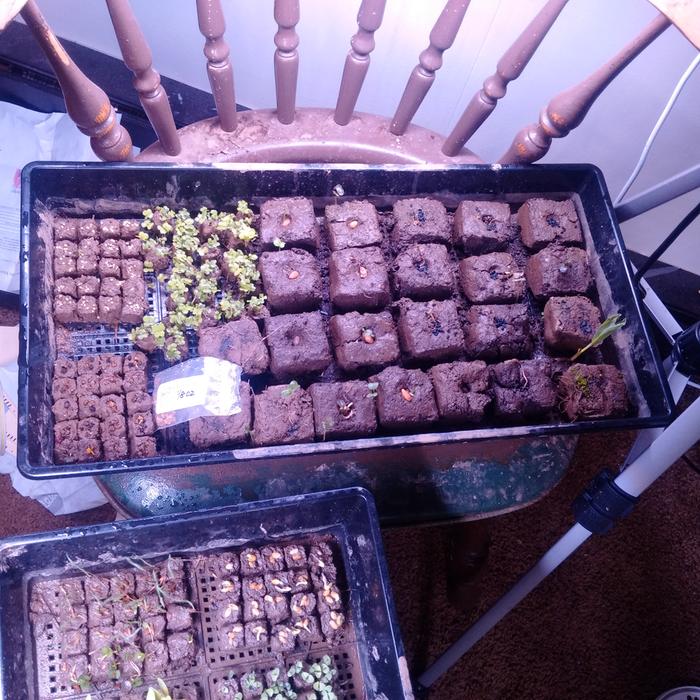 Owen Davies
Posts: 14
2
posted 6 months ago
Some of the new seeds I planted out were put into blocks.
Top left is SESE Cisineros grande tomatillo.
Top middle left is SESE peach tomato.
Bottom middle left is SESE Red acre cabbage.
Bottom left is red cargo rice. I soaked about 1/4lb of the rice, replacing the water every day for about a week and a half. I got 14 grains of rice to sprout. My guess for why germination was so incredibly low is because the bag was vacuum sealed, likely quite old and probably sprayed with a sprouting inhibitor. Hopefully those 14 grains work out fine. If each produces a healthy plant, that should be enough to prevent inbreeding.
Bottom right is SESE golden acre cabbage.
Middle right is kitazawa red komatsuna.
All empty spaces were filled with SESE Trifecta Muskmelon (after the picture was taken).
IMG_20200501_053109.jpg 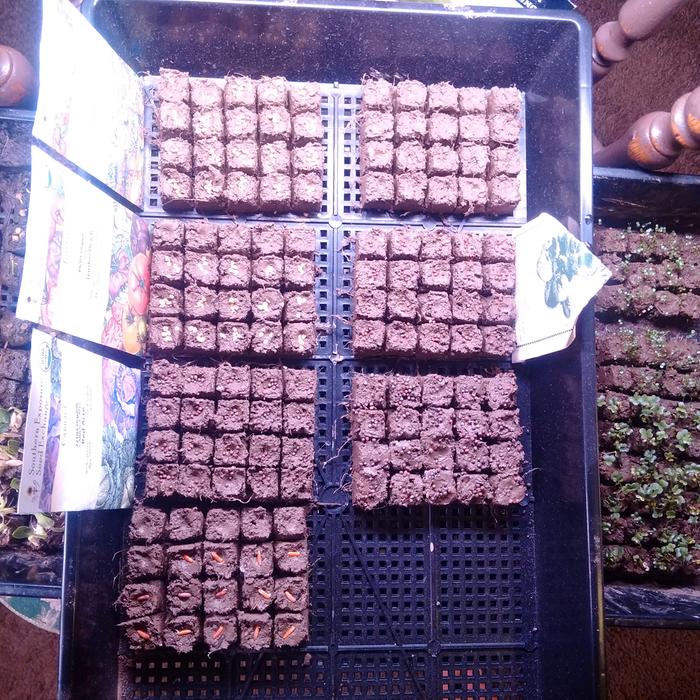