Hugel(ish) garden bed vs the other one

Caitlin Mac Shim
Posts: 54
19
posted 2 weeks ago
I’m currently living in an inner suburbs rental property while preparing a place to move my family into at my folks place. So permie experiments are going on at both locations, which are vastly different. This post is about an experiment at the rental digs!

So, I wanted to have a go at a hugel, but not run into troubles with the landlord when we vacate this site in the near future. Also I didn’t have much wood here and didn’t want to have to bring any from my folks. But I did have a heap of overgrown winter garden bed. We have mild winters, and that’s basically our brassica / broad bean / pea season. I had a whole bed full of 4 foot high kale that had bushed up and gone to seed, 6 foot + high bushes of overgrown fennel, broad bean stalks, that sort of thing. The bushed up brassicas and fennel had Thick thick stalks... they had really turned into bushes, and I wanted to get it all cleared up and looking nice for Christmas after a long and overgrown lockdown in Melbourne. I also had little money to spend on bringing in fertility for putting in the summer garden, so decided to hugel what I had handy.

I pulled up all the spent/overgrown winter garden, and dug a big wide hole down the centre of the bed. The bed is just a big square, about 4m x3m, so I dug the soil from a 4m x 2m section in the middle, piling it up on the edges. Then put all the garden ‘brush’ down in the middle and jumped on it until it was sitting as flat as I could make it. I found a half bag of some organic chicken manure/seaweed/fish emulsion Pellets and chucked in a few good handfuls, then shovelled the soil back (trying to keep the soil layers where they had been). The soil on this bed is very deep compared to my folks place (here it goes down a foot but at my parents it’s lucky to be an inch). I reckon I dug down a foot and then when I put all the soil back the bed was probably mounded about a foot above ground level. Not much of a raised bed for a landlord to complain about, and it’s sinking all the time lol.

Because the ‘fill’ plants are brushy, rather than a big solid log, and the soil is sandy in this patch, the soil and plant material well ‘mixed’ together (the soil sort of sprinkled through). And I tried to have at least 4 inches of soil on top for planting into, although there were some bits that poked up.

I then massively over-planted. Corn down the middle, tomatoes around the northern and western sides of the corn for protection from our blistering summer sun. Zucchini’s around the north and western edge to protect the tomatoes from the dog, and cucumber on the eastern and southern side where they would be shaded (I’m in melbourne - so suns to the North). I threw a few more handfuls of pellets around and lightly mulched with a half bag of pea mulch from winter.

I knew they would be a little crowded but thought it might help in the summer heat, as I was planting late for our summer and risking the young plants getting fried. I didn’t bank on the enormous quantity of kale, mitzuna, rocket, and some other type of Asian spinach  (I think) that also decided to volunteer. Also lots of borage and some amaranth.
Now, midsummer, that bed is like a triffid in the corner of the garden. I swear it kind of.... hums...
Despite being crowded beyond reason the plants are green, lush and healthy, and cranking out squash, Cucumbers and tomatoes. I’ve never done well with corn so don’t know if they would be considered turbo in this case, but they are producing cobs already better than I’ve managed before. The Zukes get a little white mildew stuff on them but they always do here due to the hot-cold-boiling-humid-hot again-wet again- cold again melbourne weather - they’re doing better than usual despite having tomatoes sitting on them.

And the greens... I’ve got so much greens The neighbours and family can’t take any more. First I started pulling up the borage to make a little space and dropped it to mulch the bed, but now I confess I’m sometimes mulching with salad.... there’s just too much!

This has been a really cheap and easy way for me to clear out overgrown and spent plants (keeping the landlord happy), whilst creating my happiest and most fertile garden yet.

I should mention that (unlike the other garden bed) this garden didn’t get hammered by our super hot days (a few days of high thirties Celsius in a row). A couple of leaves on the zucchini’s got burnt, but nothing like usual. I guess most of the ‘fill’ plants were green, so full of water when they went in. Might be something to consider for hugels/raised beds in dry climates where people find the beds get too dry? 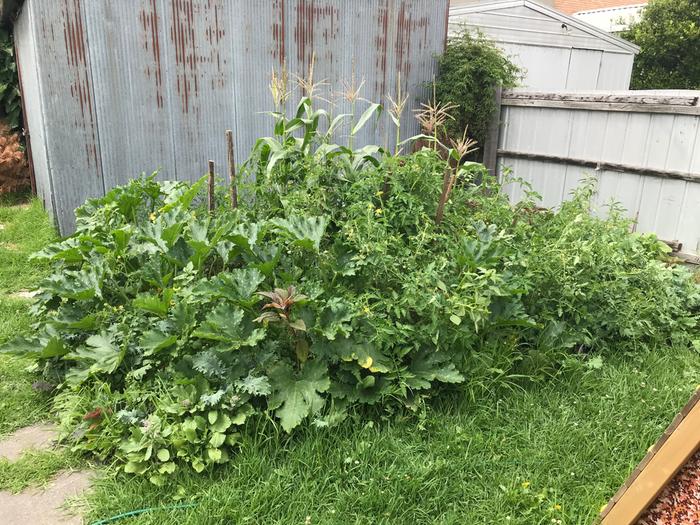 posted 2 weeks ago
Good job Caitlin. That looks very nice. The comparison picture of the other bed really shows that hugels work. They are more work up front than a typical garden but in the long run they are easier. They do an amazing job of retaining moisture & improving the soil. I'd venture to guess that after you move that particular spot in the lawn will be green when all else is brown. If you build a tall one at your new place you will be able to take advantage of the microclimates that provides. For many years. Good luck with your hugel adventures!

Caitlin Mac Shim
Posts: 54
19
posted 2 weeks ago
Thanks Mike!
I must say I’m stoked! I never knew anything about hugels until I found this site, and the idea just made so much sense.
I know many many people here have been doing this for a long time, but I thought I could document it as an example for any other newbie who’d like to give it a go but are in rental digs or also don’t have wood where they are. Just bury what you’ve got! It’s still so worth it! Even if it’s just last seasons residue/annuals. Once I would Have used these as mulch, but now I think they’re much more valuable under the bed.
It has made a big difference in terms of the moisture available to the plants and their ability to cope with the heat.
Is there a particular name for hugeling with green/sappy/brushy type stuff? In comparison to large wood logs? I have read that some people have found their hugel beds to be dryer due to being raised, but in my case the buried green foliage has more than made up for that.
Thanks again for your encouragement!
Cheers Caitlin.

posted 2 weeks ago
There are soooo many cool things on this site that make excellent sense. I've been here several years & still find something new & interesting every day.

I'm not aware of a particular name for hugels using small green stuff instead of actual logs. I think the main difference between the 2 is longevity.

The drying out issue is mostly dependent on local climate. Hotter drier climates (such as Texas where I started with hugels) seem to do better if they're not raised too much. When fresh logs are used they do tend to need extra water the first year or two. Here in Tennessee we get more consistent rains. Haven't watered here except for flooding it when it was first built.

Have you encountered Ruth Stout composting? It's simply burying kitchen scraps & other compostables directly into the garden. Sort of a hugel-lite approach. Here's the link to the BB for that.

Since you're moving & likely to make a new hugel there let me introduce you to my little friends. Humphrey and Bogart.

I'm not aware of a particular name for hugels using small green stuff instead of actual logs. I think the main difference between the 2 is longevity.

The drying out issue is mostly dependent on local climate. Hotter drier climates (such as Texas where I started with hugels) seem to do better if they're not raised too much. When fresh logs are used they do tend to need extra water the first year or two. Here in Tennessee we get more consistent rains. Haven't watered here except for flooding it when it was first built.

Have you encountered Ruth Stout composting? It's simply burying kitchen scraps & other compostables directly into the garden. Sort of a hugel-lite approach. Here's the link to the BB for that.

Since you're moving & likely to make a new hugel there let me introduce you to my little friends. Humphrey and Bogart.

Thanks so much Mike! I’m sorry I took so long to respond, I took a while reading through your epic hugel threads! Humphrey and Bogart are awesome. I love the way you documented the process as you went. Very inspiring. Thanks for sharing, it’s helped me sort out my own plans a lot.
Cheers, Caitlin.
Joe Hallmark
Posts: 13
Location: Central Texas
3
posted 1 week ago
Oh cool Humphrey kind of got my wheels turning to start my hugel too!
Mike Barkley
gardener & hugelmaster

posted 1 week ago
You're both welcome. I should clarify that only Humphrey is mine. Joshua built Bogart.

In Centex use the cedar & mesquite sparingly in hugels. Both take a very long time to break down. Might make a great lower layer though.

Joe Hallmark
Posts: 13
Location: Central Texas
3
posted 1 week ago
Oops lol. The majority I used was mesquite. My property is somehow void of it but my neighbor had a bunch sitting around where he had let someone cut firewood. They left a ton just laying there. It was sitting for a while so partially decomposing already. The rest was a combo of red oak , post oak, and live oak from tree trimming or broken limbs I gathered off my property.