My SO and I are looking into building a home. Initially we were planning on buying an RV for about $8000 and putting it on a friend’s farm. However, I never really loved that idea, especially because we’re planning on living in a home here for another 4-5 years or so before moving up to eastern TN (we live in inland North FL now) and I don't think I could stand to live in an RV for that long. Anyway, after doing some research over the past week, I discovered cob and straw bale construction. I can't believe how much I fell in love with the idea, and thankfully my SO loves the idea of building something, since he wants to practice for when we build a home (log cabin probably) in TN. I’m hoping to build a 450 square foot home first, with adding more on later. I want to keep it small at first to keep costs down, to make sure we know what we are doing, and to have a home ready to move into quicker.

I have some questions that I’m sure are ridiculous, but my mind is spinning having just learned about these natural construction methods, and I figured this was the best place to get some more information. I’m planning on getting some books from Amazon that I keep seeing recommended, but first I wanted to be more sure of the type of construction we want to do.

Firstly, I’m not sure if we should go with a straight cob home or a cob-straw bale hybrid. From what I have read, straw bale hybrids are constructed faster, with better insulation? But I’ve also heard that they may not be good in FL. It may be more expensive too. We have access to free scrap hay for cob, but not to free bales. They may be cheap though. Also, whereas someone in a colder climate would put the bales one side of the home (South I think?) to insulate from the cold, in a hot climate should we put them towards the opposite side, to insulate from the Sun? It can get a little cold here in the Winters since we’re in Northern Florida (40’s - 50’s maybe), but nothing like where I’m from (Buffalo, NY).

Am I right in concluding that there is a difference between a straw bale home that has 4 inches of cob on either side, and a home where the walls look more like this?: 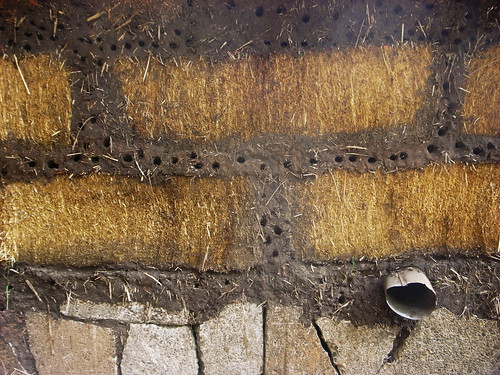 Which one would be more conducive to my needs?

I also read that putting other things into the cob, such as large rocks or large pieces of concrete, can speed up drying time. Good idea? I also read about mixing sawdust and wood scraps right into the concrete to lessen drying time.

The other (OK...ONE other) thing I’m worried about is roofing. When building an addition onto a home, how difficult is it to attach the two roofs together? Are there certain types of roofs that make it easier to do so? The types of roofs I keep hearing about are reciprocal roofs and gable roofs.

Any thoughts or advice is greatly appreciated. Thank you so much in advance!
R Scott
pollinator
Posts: 3737
Location: Kansas Zone 6a
158
posted 8 years ago
Straw and cob do not do well in humid environments. But rice straw bales may do better, as it is as long lasting as you can get for straw.

Open bales will not last without constant chemical treatment for bugs and mice. But if you only want a 5-10 year solution, they probably will work.

Best thing IMO is to deal with the friend about building an outbuilding (garage or small barn) and live in it with as little modifications as possible. Small barn built with rainwater collection and passive cooling in mind. Small solar for fans and basics. small woodstove for heat.

Reciprical roofs are cool but do not lend themselves to additions. Gables are definitely easier to add on to.

Carly Murawsky
Posts: 8
posted 8 years ago
Thanks for the advice, R Scott. I did some more reading and that photo shown actually has cob on the inside (for thermal mass), and will be covered over with plaster. I thought cob was OK in humidity, as they are made in the pacific NW where it's pretty humid? I guess I'll have to do more research into that.

Building a barn/garage would be good, I just figured it would be more expensive, with all that lumber needed. Or is there a way to do it cheaper.

Also, I'm not looking to sell this house, but to give it to my friend for use as a place to do herbalism classes when we leave. Resale value isn't important to us.

An RV is still an option if the construction idea isn't workable.

R Scott
pollinator
Posts: 3737
Location: Kansas Zone 6a
158
posted 8 years ago
A barn may be more expensive--depends on style and source of wood and siding--but straw is ridiculously expensive these days. It is not the "free" for the taking material many make it out to be.

Seattle humidity is not the same as Florida humidity. It is cooler so mold grows slower naturally, the same relative humidity is not as much moisture in the air, and people are running heat throughout more of the year to dry out the house. Although you are north florida so it isn't SO bad, it is still something to research. And the bugs.

I read someone dipping their bales in a clay/lime/borax slip to seal them before stacking. I can't remember where or if they had a long-term report.

I live in the Willamette Valley in Oregon and the humidity here is pretty high year-round. Cob does very well here, despite living in a rainforest. I think cob would do just fine in Florida. You should check out www.barefootbuilder.com. They have built cob in Florida with success from what I understand.

450 sq ft is a fairly large home to build out of cob in a season without a significant amount of labor from a group of people. I would suggest checking out some books on cob building and get a good idea of the time involved in building one of these homes.

Building with cob is an incredible experience, and the homes that are created are magnificent to live in! Check out your local area for people who are doing these kinds of things there in Florida. They will have a much better idea of what works well and a better knowledge of local building codes and enforcement.

Best of luck!
Carly Murawsky
Posts: 8
posted 8 years ago
We've visited a cob home nearby and also found out that a friend of a friend gives cob building workshops, so we'll definitely have to contact her soon. I am surprised by the number of resources nearby and all the people who are willing to help us. We've been collecting free materials over the past few weeks. We're extending the time to build by at least 6 months, so that takes some pressure off.

What I found very interesting was that the roof of the cob home I visited was a dome structure that he built out of metal pipes and covered in palm fronds. Now this does pose the problem of not having an overhang to protect the walls, but I thought that one option might be covering the whole structure in palm fronds. Anyone ever heard of that?

I was also thinking about using pallets within the cob walls, but I did hear that wood in the cob might be less sound than cob alone? I can't find much info on a pallet-cob wall. Any advice about that?

Thanks to all who have responded so far!