Christine Fedora
Posts: 8
posted 7 years ago
First of all please pardon the really bad picture, just trying to get my idea across. I live in Nova Scotia and temperatures go up to 30 Celsius in the summer down to -30 Celsius in the winter. I built a greenhouse to house an aquaponics set up. I am building in a rocket mass heater to heat the greenhouse and would also like to heat the pond with it.
My plan is to build a 6" system, and after running the duct through cob mass to run the duct around the pond, which will be partially below ground and partially above. I had originally thought of decreasing the duct to a 4" flexible dryer duct and running it through the cinder blocks (which would be the wall for the pond). I have read a few different things that suggest that that could be problematic because of the decrease and the flexible dryer duct, and not enough direct contact with the blocks for heat transfer. So I had thought about setting it up so the heat will draft directly through the cinder blocks, which would be closer in the CSA, and more direct heat transfer. My thoughts were that I would add in 3 dampers to contol if the heat went through the mass and out the exhaust, or through the mass, then around the pond before going out the exhaust. What I need to know is A: is it feasible that this will work? B: what kind of temperatures could I expect for the water? ( The pond will be about 500 gallons and I am hoping to keep water temperatures between 25 & 30 degrees Celsius) C: would I be better off piping the 6" duct in the ground around the pond? D: Is there a better way I could do this? I would desperately love any feedback, suggestions, or comments!
mass-heater.jpg 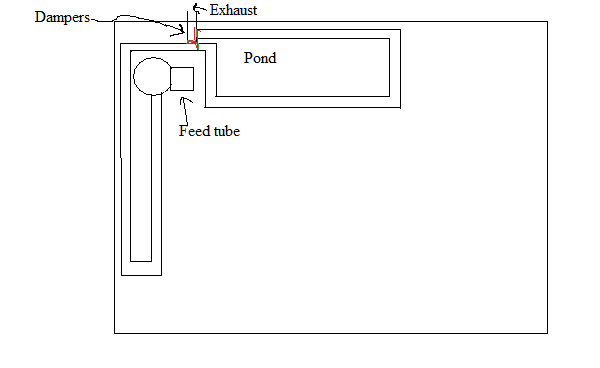 Why not consider putting copper coils around the rocket riser, then run "PEX" piping underground to the pond into another copper coil which would be your heat exchanger for the pond water. At this scale, I would imagine that 3/4" tubing would be the minimum size required. If idle-use freezing is an issue, your could use just enough propylene glycol (RV antifreeze) to fill the tubing, and a small, atmospheric feed reservoir. You would also need a small circulator pump for the system. It is possible to eliminate the need for a pump, by upsizing the tubing on the return side of the system, thereby achieving "gravity" flow. The pump would be much more efficient, though, in terms of speed of heat transfer. :

Balint Bartuszek
Posts: 56
Location: Hungary
posted 7 years ago
If you circle around the pond, you certainly warm the water gently. I don't know how sensitive fish you plan to keep, but i would just take the exhaust pipe right trough the water. (After it has gone through a few meters of cob of course.) I would use a kinda "u" shaped removable piece to heat the water, it would be welded airtight, and i would submerge the bottom of the "u" part in the water. It sure pose a bigger risk to the fish, but it has only a fraction of the length so a lot less resistance.
Oh scratch that, the condensing water can fill the bottom of the "u" part, bad idea!!!
Andor Horvath
Posts: 91
1
posted 7 years ago
Christine,

first, see how Rob is doing it:
http://www.youtube.com/watch?v=FUc10qKM9ts

-don't pull heat off the riser - only pull heat off AFTER the combustion zone
-calculate some BTU's, you might be trying to heat more than the size of your planned unit can "handle" without condensing the exhaust...

search for "length of exhaust" also...

others will chime in, but my gut reation is that you are asking too much...

energy in, energy out: within reason...you might want to try multiple units

we CAN build a better world

don't be "desperate" so soon; build and try some small units to play with...search also for rocket/snorkel stoves...

too often people are looking for answers before they have a feel for something; play a little...perhaps subdivide your needs into seperate feed units, or consider a larger CSA? Remember, a very large mass is going to take a large initial input to warm...with all the inherent issues upon first start up...

search also for the rocket stoves/greenhouses specialty on this forum...

we CAN build a better world

Beth Simmons
Posts: 12
Location: Vermillion, SD
posted 7 years ago
I get the desperation. For most of us this is a considerable investment in time and money, and for some of us who are older and disabled, mistakes are not just process but painful. So as somebody in the middle of a similar project, though by far not as expert as many here, I thought that I would share some thoughts. I too am in a northern climate, though a bit more extreme of one. Our RMHs are for a specific goal.

So let's look at the goal for a minute. From the temperature goal you have, I am guessing that you want to do talapia? Blue talapia can go down to 65 F. My plan is to maintain a breed stock in my basement and raise them in the greenhouse in the summer half of the year where we have extremely hot temperatures, I will try something like walleyes that can handle lower temperatures. We also have more sun than you year around. To maintain that water temperature you will have to heat year around if you stick with talapia. The survival range for trout is published at 35 to 75 °F (2 to 23 °C).

Another thought is your layout. Your pond has considerable thermal mass, but you are trying to maintain a temperature, where your cob can get nice and toasty. Ideally you would want to be able to close off one or the other exhausts. Definitely plan a clean out there.

Are you planning to insulate the tank, likely not on the bottom, but the top and sides? Maybe a different top in the summer for me at least.

The thing to think about is that it is a system. Think about how your water will transfer heat in the tank and as the water cycles through your grow beds.

I guess what I am saying is be realistic with your goals in terms of water temperature, and do a dual exhaust with controls so you can decide which thermal mass that you are heating first. Since the mechanism is metal and it is hot coming out of the barrel, this may need regular replacement. Also remember curves need clean outs, so not under the tank.

My hope is that this forum will be a place to bounce ideas, trouble shoot and share experience, so I hope to follow your project and share.
Christine Fedora
Posts: 8
posted 7 years ago
Sorry for the delay in response, its been a while since I've been able to get on a computer, and it won't let me post from my phone. Thank you very much for your responses!

Roy - I have been considering using copper pipe, and it would be great to have it hooked up with a pump controlled by a thermostat. Although I am trying to stay away from using too much power, because I am hoping to get the greenhouse on alternative power. I like the idea of gravity flow, but don't know too much about it. I have read a few posts that talked about using gravity flow, but there was not much details on setting something up.

Andor- Thanks for the link. I really like Robs set up, but wished the video had more details on how he has the water heater part of the rocket stove set up. The pellet stove part of the heater is brilliant! I agree that I may be asking too much from the system. The reason I was planning to do a 6" system was the csa for the opening in the cinder blocks, as well 6" ducts and stove pipe has been much easier to find. Although I'm not sure if the 6" system can handle what I want it to do. Part of the desperation was that I was hoping the get the pond and Rocket mass heater in place while we were still in the worst of winter to see what kind of temperatures I could maintain in both the greenhouse and the pond. But alas the time has passed and spring is upon us. I'm think I'm going to try the 6" system, and connect the ducts through the cinder block wall of the pond, and if it doesn't work out so well try the copper pipe.

Beth - I agree completely about the investment of time and money, I am both on a very tight budget, and I have two small children, so the majority of work has to be done during nap time.
I know it would be far easier for me to grow trout since they are native to here so temperature wouldn't be an issue, but I don't really like the taste of trout. My family goes though a lot of talapia, and we all really enjoy it, so I would really love to find a way to grow talapia.
My plan was to intall dampers so I could control whether the cob mass was heated, the pond, or both. The walls of the tank will be built with cinder blocks, and bricks, with probably rocks cemented around the outside for additional support. I planned on making a cover for it, but have not yet figured out the details. I was thinking of using plywood with a layer of some sort of styroform. I think the place where I will lose the most heat will be through the grow beds, and to be honest, I have no idea what is the best way to deal with that aside from maintaining a high air temperature.

I will post with the progress of my project, thanks everyone!