I've been growing an "espresso oyster" mushroom patch from Fungi Perfecti separated into 4 trays. As it is my first time growing mushrooms I made a few mistakes. The biggest is that mold developed on the surface of 3 of the trays and killed any mushrooms that had started.

My question is: can I salvage the myselium in the 3 trays with mold?

I think it is a goner.  I called and talked to a few different people and the response was massive.  It could be all sorts of things.  But it does sound like you screwed it up.  Any chance of posting pics and telling us some details of what mistakes you think you made?

Overall, my impression is that the fungi perfecti folks really want you to be a happy camper and they will work their butts off to make sure you have a first time success.

posted 11 years ago
Gordon, how much of this did you buy and then spread onto four trays?  I wonder if you might be spreading it too thin.

Do you have this:  http://www.fungi.com/pdf/pdfs/instructions/kits/LKPOE.pdf

The mycelium has a much better chance of being overwhelmed by mold competitors when spreading it out too much. Its a numbers game, and keeping the mycelium in mass allows it to colonize the substrate and defend off competitors.

Posts: 2
posted 11 years ago
Yes, I have the instructions. They use a 5 gal. bucket, but I was looking for a form factor to fit our kitchen window a little better. I purchased a single package and split it up into four trays and added a smattering of coffee grounds.

The trays are made for drywall mudding, so they aren't particularly shallow. I've attached a picture of the remaining tray.

I did have some mushrooms appear, but at first they were spindly. I added ventilation holes in the plastic bag they were kept in and that seemed to help.

At that point three of the trays grew a coat of mold and the few mushrooms present died. Only one set of mushroom has appeared in the try that didn't get mold. I've attached a picture.

They're a bit small. Perhaps that is a result of the smaller mass?
I'm not too worried about these problems, it's the first time I've tried this, so live and learn... 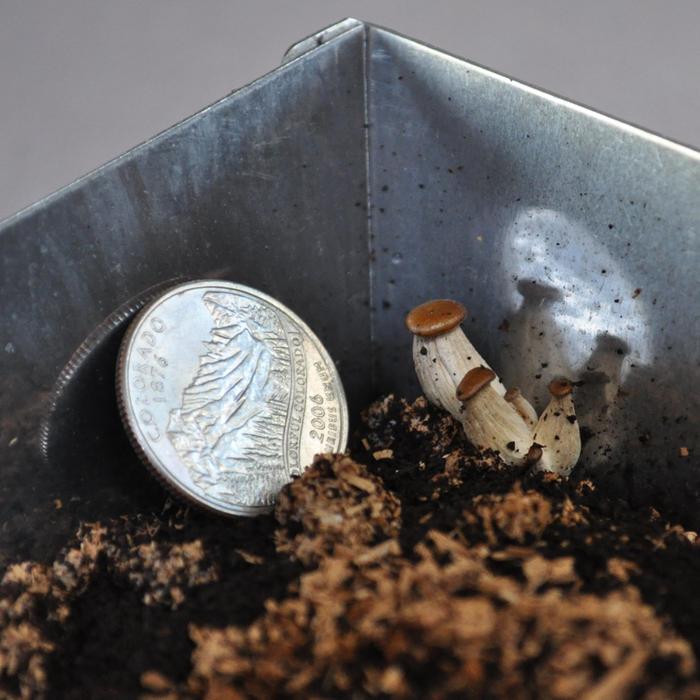 charles c. johnson
Posts: 369
posted 11 years ago
i use the drywall pans for bread loafs