Tom Strode
Posts: 37
posted 8 years ago
I'm still looking for a durable DIY lining for the inside of of the riser. I've found one comment that stated that the standard perlite/clay riser is only good for 4 or 5 years (with care). I expect that means till burn through, or until it loses enough insulation value to quit working. If it deteriorates at a steady rate then you're losing about 25% a year and that seems pretty high. I'd like to do better.

There is a video at of a blacksmith lining a forge. That looks like a pretty tough finish the way he's filing on it, and he gives his sources of materials in another video. Would anyone with more experience with refractories like to comment on this? I'm not sure what each of those coating is doing, or what would happen if you left it out. I'm thinking line the inside of a 10 inch tube for a 8 inch riser.
thomas rubino
rocket scientist

posted 8 years ago
Hi Tom; Good video on forge making. It seems that trying to do that process inside a tube would be difficult at best and seems cost prohibitive. The only experience i have with those chemicals is sodium silicate (water glass). I attempted to repair the burn chamber on a cast core with a mixture of fire clay perlite and sodium silicate. The patch did work , temporarily. I also experimented with brushing the sodium silicate on the inside of existing core and the firing the stove off, this seemed to put a glass like coating on the face and has held up much better. Have you seen matt walkers video on pouring a cast riser with fire clay perlite and some refractory ? He uses a 16 gal grease barrel with an 8" hole cut in the bottom, then he used a piece of 8" stove pipe as a sacrificial form , I used a 8" piece of cardboard sonitube instead, that burned out with the first fire. Most of the riser is contained by the 16 gal barrel ,unless something was to jar the riser I can't see it deteriorating for many years. My riser is still in its first year so i can't say for sure that it won't fall apart 4-5 years from now, but with a removable lid on your 55 gal, inspection is a breeze, and if it was necessary replacement would be not that bad. Cost for the clay riser is minimal, if you need to replace it. Another option is expensive, buying 2300 degree castable insulated refractory in 50 lb sacks would build a riser that should last a lifetime, I am considering that investment myself, to make a cast core or two this summer, but I would still build the riser with (matts) mixture of clay & perlite and a small amount of refractory . If I find that my riser is deteriorating I will try painting it with sodium silicate to create a glass like finish inside. I have included pictures of my riser before firing and after 4 months of drying cob and keeping a greenhouse warm all winter. I think that so far it has performed 100%. The top of my barrel glows orange and reads 1100 degrees. I am assuming that inside the riser, I have temps in the 1500 degree range.
R-8.JPG 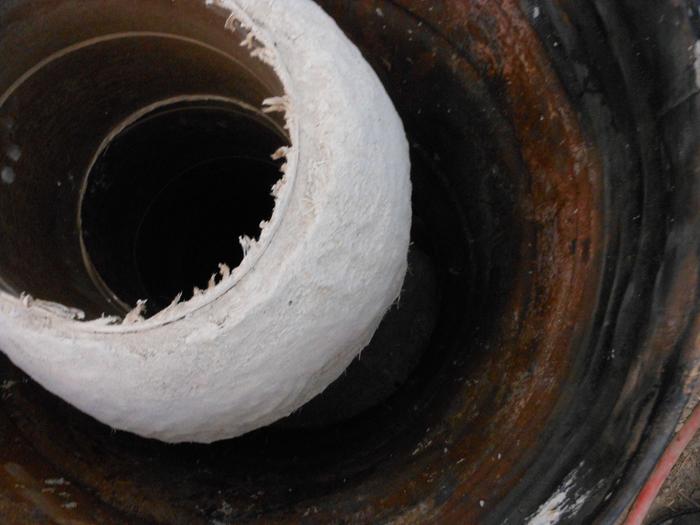 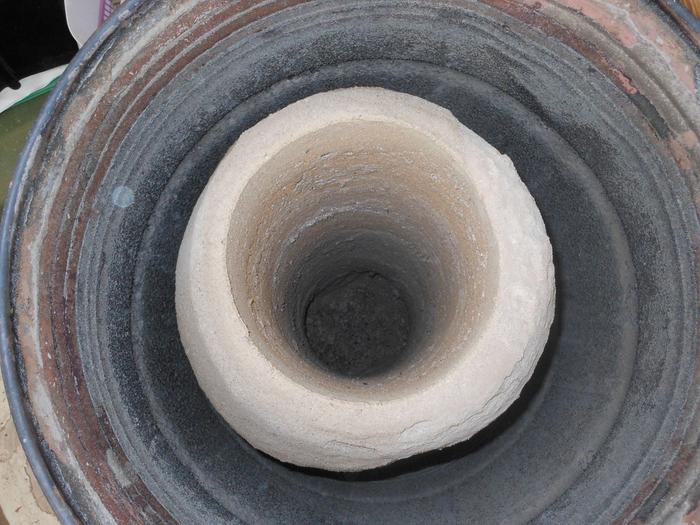