Hilde Alden
Posts: 7
2
posted 5 years ago
I am working on the food forest design for our new farm in Northwest Washington state. We have a nice slope which would, in classic permaculture design, call for a swale running across it. The question is, do we need a swale in our wet wet climate? Does anyone have experience with the benefits of this in an area which is not at all wanting for rain?
Peter Ellis
Posts: 1444
Location: Fennville MI
43
posted 5 years ago
Lots of examples of water management strategies in use in the Pacific Northwest. Lots of them use swales.
It really is not about rainfall, but about keeping water in your land. Unless your situation is one where saturation leading to mudslide is a real possibility, I don't know in what climate I would not use a swale. Even in high water table scenarios, the berm is a raised area that will be a bit drier, and that can be a benefit.

Dale Hodgins
Posts: 9002
Location: Victoria British Columbia-Canada
668
posted 5 years ago
Over saturation is an issue here. I would never carve at a slope to make it suck water. I allow up to 50 acre feet per day to flow through a big culvert with no attempt to store any of it.
Zenais Buck
Posts: 113
Location: PNW
4
posted 5 years ago

Dale Hodgins wrote:Over saturation is an issue here. I would never carve at a slope to make it suck water. I allow up to 50 acre feet per day to flow through a big culvert with no attempt to store any of it.

I am learning that context is everything! I am going to put a few swales high on our land (PNW); but meanwhile a neighbor of mine is slogging through mud daily. Unfortunately she had an idea to dig a series of ditches... on contour... yep, those things are basically swales and her access road is now is knee deep in mud. I am working on a strategy to keep her water moving on through.

So Dale, can you tell me about your culvert system? I have heard much about catching and sinking water, but my knowledge on safely draining it away as quickly as possible (without erosion) is slim! I am also wondering about nutrient loss in these rainy environments.

I am currently taking Geoff Lawton's online PDC, so more info is probably coming from that direction. Cant stop my brain from wondering, though

I've found that you have to be careful in your swale design - to deep in spots and the water slows (relatively speaking) and then soaks in down hill and turns that area into a mud bog....with surface water. Uneven swale bottom can have this effect too, or to little of a grade. You really have to watch how the water moves in your ditches/swales.

I had to redesign my pond run off ditches last week during heavy rains. My animals had messed up last years work. I created steep sides and smooth grade transitions with small (inches) waterfall drop offs every now and then. This sped up the water flow through the ditch on contour, and the land down hill dried - that is to say it was no wetter than any other place under that much rain. Surface water had disappeared. Before my ditch the water spread out, running all over the surface of the land. This leaches the land of nutrients. So personally I would not capture and/or slow down water where buildings, roads or animal housing was just down hill. My garden is just down hill of my pond's overflow. There's a time when we want to slow down and even capture water, but there is another time when draining off water from certain areas is a necessity. A plan for draining water is a good thing for the land when the water is obviously doing damage.

I plan on running extra winter rain run off quickly to my seasonal creek, where I will be putting in logs and rocks every so often to build mini dams to slow the water in the creek. The creek has very high sides so water expansion will not be a problem in the that area.

My neighbor put in a very small pond on the high ground just above his RV and outbuildings last year. This year, he was complaining about all the mud and water even with lots of rock being dumped. I asked him if he had sealed the down hill side of that pond and he said no. I said he was the one who was bringing in more water to his compound. And the next day he was digging a french drain in front of that pond. He has since reported things are back to normal (for Oregon) in his living area. He ran his french drain into his seasonal creek. With french drains you do not have as much issue with the downhill grade of the ditch as you do with a swale. The pipe helps to 'move' the water.

Dale Hodgins
Posts: 9002
Location: Victoria British Columbia-Canada
668
posted 5 years ago
My culvert was there before I bought the property.  It's about four feet in diameter and it sends water under my road and down to the valley . 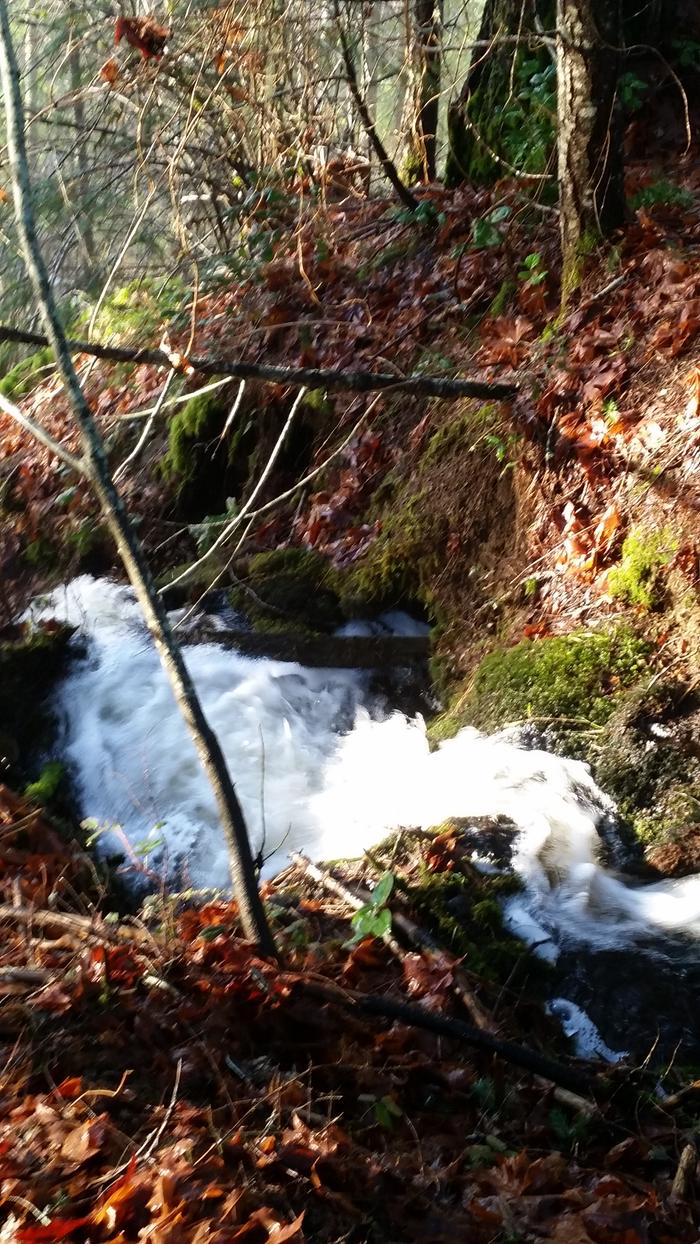