Not a RMH but posing as one.

Mikael Long
Posts: 54
5
posted 7 years ago
So if you are on youtube at all you may have seen these treads talking about candle clay pot heaters. Well being the piro/scientist/engineer type that I am I could not resist. What bothered me the most was a misrepresentation of the science or people using sci ency talk to prove or disprove. Stating things like the conservation of energy but not talking about how a mass might change the rate of dispersing the heat and the possibility that some kind of prylast or re-burn of the the candle smoke could occur like in an RMH. In short after a little experiment without much data, I found no stack effect(with the designs available) and little more than a slight delay in the release of heat or the basic conservation of energy. But the worst and most egregious fault of these videos is the danger that a. being in a closed space with any combustible heat source. And the likelihood that a fire from the wax will begin and flash burn into a torch and burn out of control. If it could get hot enough it will catch on fire. Or to put it more simple to get any heat out of lets say tea candles you need 20 or so and well thast what I did. and it burnt up in a short period. It was in the greenhouse which made it a safe experiment but even with the fail safes such as a burn proof setting the smoke would have cause damage to someone in that space. I stepped away for about 10min and that's when it happened. Just when I thought it was safe. It was showing internal temps of 250F and exterior temps of 120F. I see no real variations of this kind of burning heater. Without and exhaust there is fumes and if it is exhausted without extracting the heat the useless light a bunch of candles and hover over it if you want but well. Not for me.
20150219_101431-1-.jpg 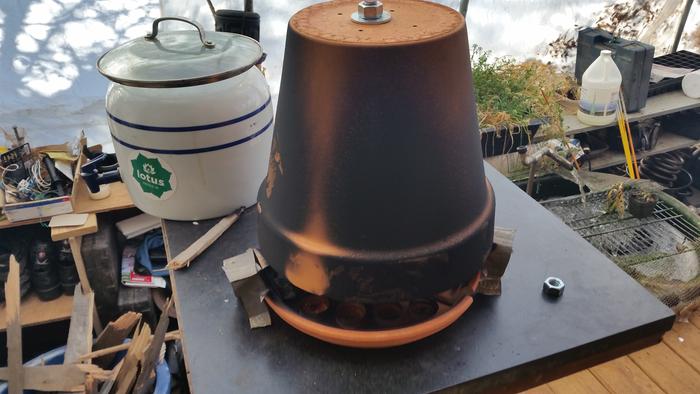 Erik Weaver
Posts: 219
Location: S.W. Missouri, Zone 6B
8
posted 7 years ago
Yes, I've seen them, and discussed them with my father (who brought them to my attention as a result of a Facebook post I believe). I was never able to get around the rather basic point that heat cannot be magically produced. How much heat does 20 candles put out? Well, 20 candles worth of heat

As you mention, *IF* you can also burn the exhaust, *THEN* you will get better heat production than someone who cannot burn the exhaust (smoke, basically). But as you noted, that is NOT what these designs purport to accomplish. Thus to my mind they failed at the theory level of the discussion. It would be different if the tiny candles made way too much heat to use immediately, then the clay pots (or whatever) could be used as a thermal mass to delay the period of heat recovery to the room. But again, this is NOT the nature of these tiny candle heater designs.

Your warning about suddenly sending the candle wax up in unexpected flames is a good safety point. Although, that also opens the door for a different design that did safely burn the wax, and try to recover that heat. (But I'll be spending my time on the RMH designs, heheh.)

Using a RMH we *do* burn exhaust fumes, smoke, etc. So we are able to reach a pretty high theoretical heat recovery, in terms of burn efficiency. How much of that heat we retain as practical heat energy is a second question, as I'm sure you know.

Do you know if there is a calculation to determine the amount of heat retained in a burn? Something like temp at the burn vs temp at the end of the chimney?

Mikael Long wrote:Hi Erik
Do you know if there is a calculation to determine the amount of heat retained in a burn? Something like temp at the burn vs temp at the end of the chimney?

I'm sure there is. however I'm not an engineer. But for simple layman's use, I think a measure such as you discuss is reasonable approach. I would add one element in front of that, which is the efficiency of the burning of the wood and the exhaust (smoke, etc). I wouldn't get too wrapped in trying to capture that information however, because most of us cannot. If you can afford an analyzer that's a different matter.

Otherwise, I would use burn temperature as a corollary/analogue. If one really wants to get a good idea of what is going on, I think the easiest way is to embed thermocouples. Another option is to make tubes into which thermocouple probes may be inserted. The expensive route is to replicate how temperature is measured in kilns. I've seen ceramic tubes which are inserted into the kiln, and then the probe is threaded into that. This is one option.

Or, given thermocouples are relatively cheap, cast them directly into the build. They last as long as they last.

Or, build in copper tubes (or something similar) into which the thermocouple probes may be inserted. If these are filled with a fluid, water comes to mind as safe and readily available, they will conduct heat through the interior of the tube pretty well I should think. (I do not think this will work in core however, where temperatures are at their highest.)

Another important criteria will be fuel. It's moisture content should be measured and each piece should be weighed before being burned. Then the theoretical energy of the fuel can be calculated, and one will know the theoretical BTU (or kilowatt hours) of heat energy that is produced.

If one knows the energy content of the fuel, the temperatures at which it is burning (so percentage of conversion into heat may be estimated), and the temperature drop across the system, to the entry of the chimney, I would expect to be able to arrive at a reasonable estimate of efficiency.

But there may other methods that some of the older hands and experts can share. I'd be interested to hear more about how people determine these figures. And of course, one can always run an Internet search and see what stove manufacturers do to test their efficiency. There's a thread either here or over at Donkey's forum that shows part of this process. As best I recall it involved identifying the species of wood, weight and moisture content, and then temperatures at certain points in the system. It also included a gas analysis, which will be beyond most of our abilities to measure. From this data they arrived at efficiency figures.

that was a good morning cuckcle.