I ve been following this forum for a while now but this would be my first post here.
maybe I ll introduce myself before posing my questions,
so yeah my girlfriend and I bought a rundown property last year on the island of fyn in Denmark, our plot of land which lies next to a public road was around 5000 sqm
just recently we were able to buy 1 hectare of land adjacent to our plot ( which we are extremely grateful for!!!) however this land is and has been traditionally farmed for quite a few year/ decades
and at the moment there is a grain crop growing on it, the land will be handed over to us after this years crop will be harvested (july /august).
our goal in life is to try to live a bit more self reliant on a sustainable way, however we tend to be more pragmatic then extremist.
I have a full time job as a gardener and my girlfriend Is expecting, after she will have one year of maternity leave.
we are in a financially favourable place since we basically bought and are living in a ruin

( 3 years left on out loan!)
unfortunately that means that most of our energy and money will go to the renovation of the house in the coming years, nevertheless I will try to do as much as I can to establish some features on the land such as trees ( i do like the id of a food forest very much) and a windbreaker that will funtcion to shield us from our traditional farming neighbour who uses pesticides and herbicides and what not

I would already like to thank you guys for all the stuff I ve been reading and will be reading here , great!
so now over to my questions:

the soil we have here is a sandy clay soil which supposedly is quite rich.
this year we will be starting a vegetable garden to provide in as much of our own food as possible.
now I ve been reading a bit on cover crops but certain aspects still elude me.
since we only have 4 chickens atm we do not have the big amounts of manure for our vegetable garden, however we have a big plot of land which we wont be using in the near future
so my id was to start of by ploughing the original plot of land (now there grows some kind of grass that multiplies by rhizome, quite a nuisance to get rid of !
after ploughing I will rotortill the soil and experiment with sowing some individual patches of the respectable seeds I bought.
I have already ordered 2kg of Lucerne,2kg of white clover and 2kg of red clover (can t recall the exact names)
now that clover is a nitrogen fixer the nitrogen seems to be taken care of but are there for example other seeds that I can mix in with the clover to cover for example the phosphor and magnesium, etc... that are required ?or will alternating between clover and vegetables cover most of my nutrient needs for my veggies???
or would it be better to have one dedicated patch for vegetables and one dedicated patch for clover and then mow the clover and use it as a mulch on my vegetables ? which might enabe me to have a no till garden in the future.
that brings me to another question! as I ve read, the nitrogen seems to be fixed by bacteria in nodules in the roots, is that where the bulk of the nitrogen is to be found ? or is it also "readily" available in the green parts of the plants ?

thank you very much in advance, looking forward to reading the replies !!
have a nice day

posted 6 years ago
I would only focus on a vegetable garden really close to your house. And import mulch from the 1 hectare site.

I would do whatever perimeter earthworks you plan on doing then planting windbreak privacy screen around your property such as hybrid polar or hybrid willow. They are know to grow 12ft (4m) in a single year.

I would then focus on growing nitrogen fixing trees about 1 meters apart. They will suppress the grass and you will cull them in a few years to make mulch. When you are ready get a electric saw and cut down the nitrogen fixing trees/shrubs and plant fruiting trees and shrubs with alot of onion and mint family plants.

so after your advice I planted several plots with crimson clover, white clover, mustard, Phacelia tanacetifolia and one where I mixed em all,
the plot with white clover was the biggest, as crimson clover apparently is a little vulnerable to being cut I left it to its own devices as I did with the other plots except for the white clover. the whole plot was infested with a kind of grass that spreads by roots so I had the land ploughed ad then rotortilled. (I should not have rotortilled cuz I just endd up braking up all the rhizomes and mulitiplying the grass i wanted to get rid off) nevertheless the plot with the white clover whenerver the grass ended up peeking over the clover I went around with my strimmer and cut around the level where the grass would peek out as in not to disturb or destroy my new clover stand, as the clover grew more mature I started to cut it with a scythe about twice this season and in the end I believe I ended up with a pretty nice clover stand even though there is still a bit of grass left in it. so Ive been using the cut material to throw in between my raised beds the first time and this time after I have harvested the beds and gave it a last weeding for the season (mainly digging up that nasty grass

) I piled about 30 cm of fresh cut quite compacted clover on top of the beds. the first time I piled a little less in the paths and the grass seamed to just grow through it in no time, so I hope I can smother that grass this time and add nutrition and organic matter to my beds. lets see

I wonder also as in how much sqm of clover stand would be sufficient to feed one sqm of veggy patch
and how do you best hold that nitrogen until when it s needed as I fear the nitrogen will get lost as the clover brakes down over winter.
my id for next year is also to plant clover where I had this years potatoes and plough under some clover I planted this year and grow my potatoes in that,
any ideas

here are some pics of this years endeavours 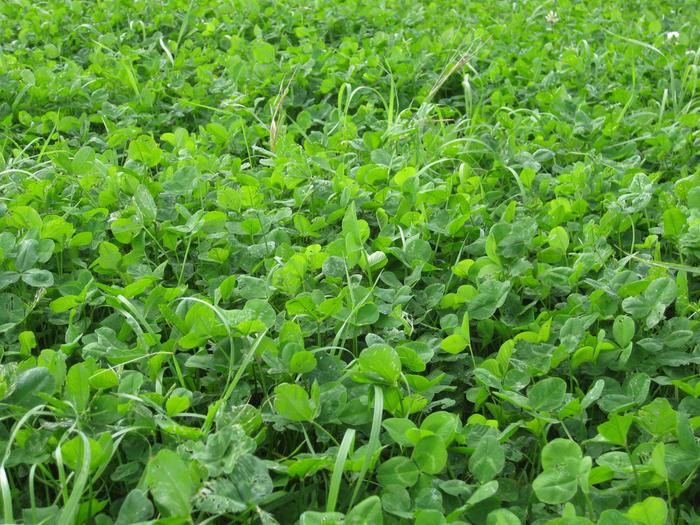 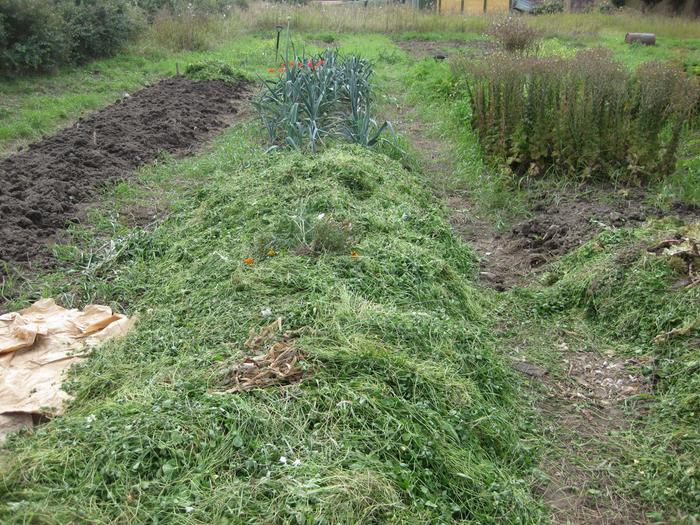 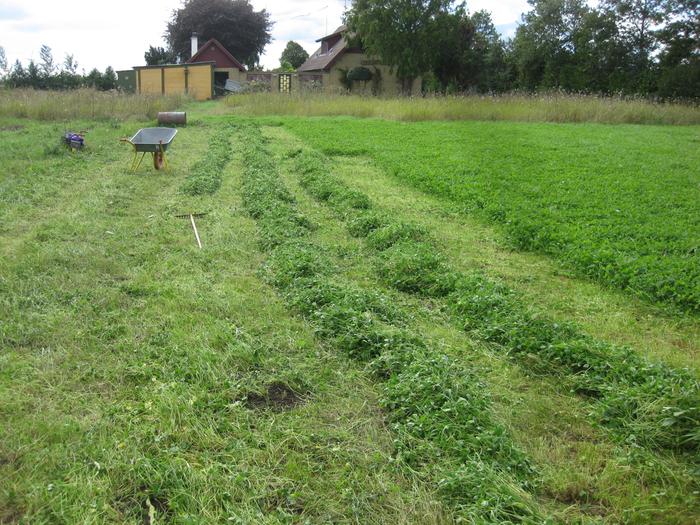 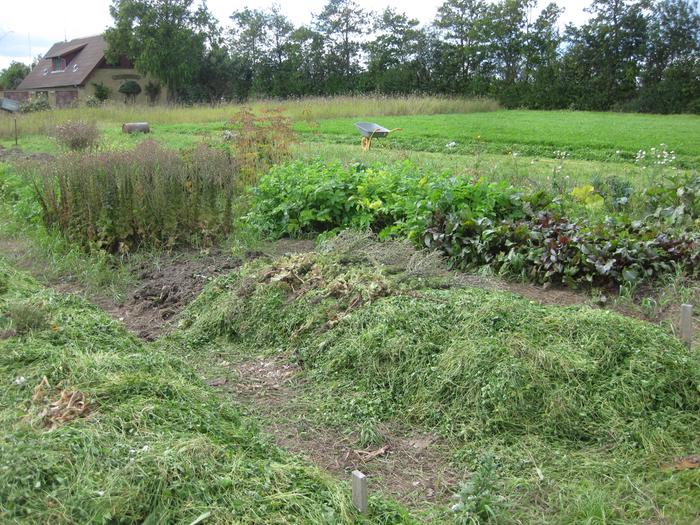 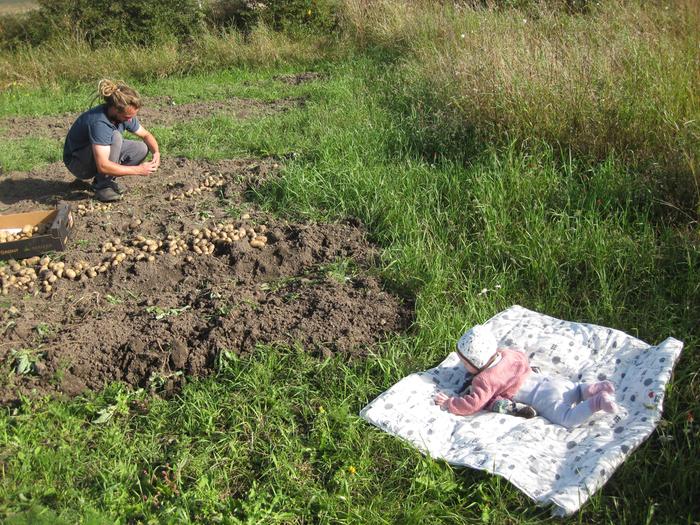