posted 7 years ago
this is fiction, or at least this month

Trashy Beginings
Chuck had always hated to see good food scraps go to waste. The intensification with his fascination with compost began after his son convinced him to attend a 6 week urban-eco-systemic regeneration workshop in Bloomington ID. In addition to organic gardening, bio-remediation, and rain catchment classes; compost was on the syllabus. After he mastered the basics of turning a pile by shovel compost quickly moved from a fascination to an obsession.

Chuck took his passion for gardening and composting to the next level when “Le Coop Noir” a french restaurant two blocks from Chucks house in the outskirts of urban Cincinnati began filling up five 28 gallon barrels of kitchen scraps every week for him. “I had never thought that I would become a garbage man, but essentially that is what I had become.” says Chuck enthusiastically.

The owner and chef of the restaurant loved the idea of “farm to table” and had been buying trays of Chuck's micro-greens for several months before Chuck suggested that their relationship intensify. “We were already cutting the guy a check for 40 bucks every other week so we figured, what's another 10 to get him to haul the bulk of our scraps away. We were already paying the dumpster service by weight, So it seemed like a good deal.” said Dan Freiensky the owner of Le Coop Noir.

The Compost Guru, as Chuck soon came to be known utilized a system called “the Chicken Tractor on Steroids” or food scraps ,processed by chicken scratching, in enclosures, that got moved periodically from yard zone to yard zone. Then the birds sweepings and bedding were processed via enclosed Vermiculture, or worm composting in bins. “I could turn the green kitchen waste into black, pay dirt, in between 2 and 3 weeks based on the temperature,” quipped Chuck proudly. “,and fishing bait to boot.”

Chuck was; despite his enthusiasm, and despite the assistance from his chickens and worm , finding it difficult to cope with the amount of waste he procured from the one restaurant. And soon there were calls asking him if he could come by and do the same thing and X, Y, and Z. restaurant in his neighborhood. “It broke my heart to think of all that rotting matter going into the landfill along with non-biodegradable pastics and toxics. I had to scale up my operation, and soon!” In addition if Chuck wanted to leave town even for more than 2 days he had to find a brave soul to drive his diesel truck to the back of “Le Coop Noir” and drag the stinky bins down a mop water soaked alley, and into the flat bed. Then back to Chucks scrape yard, close the chickens door, and rinse the bins for the next trip. “I had to plan months in advacnce to train my volunteers for that week I was gone, and it was just a headache to ever get any time off. I had to get employees or just quit.”

Enter “Compostly.”
Now a mobile phone app for Web, iOS, Android, and SMS, Compostly saw its genesis as a token based crowd funding project at the www.LetsTalkPermaculture.com community forums.

LetsTalkPermaculture was a cloned alternative implementation or “alt-token” offshoot of the LetsTalkBitcoin community. Both fell under the category of Decentralized Autonomous Media Networks (DAMNs) or Distributed Automatic Organizations (DAOs) and were built from the ground up on a platform run with “cryptocurrency” and the things enabled by user generated tokens. The suite of tools called “Tokenly” powered both platforms, and provided the underlying software framework for the token based communities.

“Tokens are like ball bearings, they aren't worth much until you build the RupeGoldberg machine that enables you to do cool things. Like pulling a string which sets off a chain reaction to make you toast or something,” said Adam B Levign CEO of tokenly and letstalkbitcoin. “We were surprised by how quickly readers and listeners of letstalkbitcoin , took the initiative to roll their own version of our site into sites of their own, solving unique problems their communities faced with, using cryptocurrency.” Permaculture and Cryptocurrency were ready bedfellows since many of the users of both ideologies were systems thinkers. The trick was how to align the incentives of the new platforms to the benefit of every platforms user.

Since the LetsTalkPermaculture network was primarily volunteer driven, roles such as article writer, editor, forum moderator, or podcaster, advertizer, marketer, legal compliance, web designer were filled by people who choose to fill those roles. The contributors were rewarded in the network’s token.  These people might work on a single article, or might use the platform for years releasing a variety of content types.  They all made their choices individually. But each voluntary effort formed an ecosystem of collaboration. Even listener, readers, and commenter received network tokens based on the quantity and quality of their participation.

Various podcasters, forum moderators, magazine writers, and kickstarter users, became excited about how LTP was allowing them to Integrate rather than segregate their efforts. Because LetsTalkPermaculture distributed the tokens as a user reward program, they did not run afoul of SEC regulations regarding stock offerings. However there was a way that site users could go to various centralized and decentralized exchanges and buy more network tokens ether as a way of supporting to the network, with their treasure, over time or talent, or as a way to invest in the future success of the platform. Tipping within the LTP ecosystem was a breeze, But for the most part the early adopters were more hardworking community members rather than shark toothed speculators.

Compost Coin
The collaboration over Compostly began with a white paper written by an anonymous community member RotSquad2012 and submitted on April Fools Day. His paper entitled COMPOSTCOIN would seek to sort out the challenges of bootstrapping small business entrepreneurs into funding and successfully implementing their local composting businesses. If successful the entrepreneurs would help their fellow Ewwwbur drivers, fufill EPA requirements for their farms/compost sites, fund future loans to other members to maintain vehicals (many Ewwwbur drivers would choose bicycle transport and were rewarded with bonus multipliers) buy land for their urban renewale efforts. This was in part done buying back shares of COMPOSTCOIN thus feeding back into the LETSTALKPERMACULTURE network's success overall. In addition to helping to fund the urban farmers. LetsTalkCompost subforum would also offer consultation to prospective composters looking to start, finetune or to scale up their operations.

But this was more than an APRIL FOOLS day joke. CompostCoin would become the use token for the p2p composting app that would soon sweep the nation. You installed it onto your phone, or logged into the site with your browser. Then predicted how much kitchen and or yard waste you could create in a week. Then based on your answers you would be paired with a local certified (each EwwBur driver was responsible for their compliance) peer. They would co-sign the compost contract, with a volenteer arbitrator, (preferable local) and you would be in business. Payment on both sides was handled by the Compostly app and drivers could choose to be paid in Compost Coin, Euros, Bitcoins, Permacredits, Or some combination thereof. There was an early adopter advantage in that there was a finite supply of compost coin, and since the token was distributed on a predictable schedule. EwwBur drivers could plan for future business expansions based on the demand for their services.

Municipal trash hauling services began to take note, and tried many tactics to maintain their monopoly on hauling away refuse, the market pressure place on them by the Ewwbur community and massive popular public support meant that they had to start rolling out composting services as part of their city budget allocation. In cities that were too cash strapped to compete they had the added benefit of having less weight every week to haul using diesel. Chuck was using the app and the forums to become a leader in his community to transition from a fossil fuel intensive trash paradigm to a regenerative closed urban food system. And that made him feel Gewwwd. 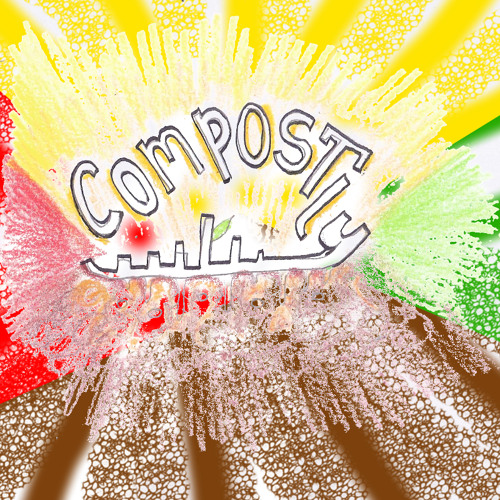 Here we have many cities that are now in the compost game, reality mimics fiction.
They have taken to composting by the stalwart enthusiasm of a small group of folks who run the operations,
the materials come from the lawn waste pickup service the cities have which keeps the stuff out of our fast filling land fills.
The money generated helps pay for the fuel for the trucks that do the pick up service, and offsets some of the salaries.