Andrea Hooper
Posts: 28
Location: College Station, TX Zone 8b
posted 5 years ago
According to the California rare fruit growers site, "extreme summer heat is (also) detrimental to the crop". Any one out there have experience with the extreme being mentioned? How hot is too hot? Thanks!!

posted 5 years ago
Hmm, I find that kind of weird. I live in Texas, and summer temps over 100 F are pretty much guaranteed, 103 - 105 F are not uncommon, and often the heat lasts for extended periods. Loquats do great here, and in fact we have been greatly enjoying ours lately, as they are just getting perfectly ripe. My grandmother had two huge loquats taller than the house, but they died in a freakishly hard freeze before I was born, the worst freeze in living memory here--apparently ponds and gravel pits actually froze over, which I can't imagine happening here. But I have never found heat to be a problem.

posted 5 years ago
I wanted to add, since I noticed we're in the same zone and relatively near each other, that loquats are one of the more common fruit trees you'll find on the old home places here (I live in the country outside a small town) along with pomegranates, figs, and some plums and pears. I take that as evidence that those trees can grow here without a lot of coddling (which my experience bears out), and that the people who lived here back in the day found them worth growing.

Michael Qulek
Posts: 167
4
posted 5 years ago
I'm located in Riverside, California and I see Loquats everywhere. Summers here are 100F+ for weeks and weeks. Doesn't seem detrimental to them at all.
Andrea Hooper
Posts: 28
Location: College Station, TX Zone 8b
posted 5 years ago
Thanks for the perspectives!! Jennifer, talk about a "stone's throw" distance! I have had great luck with pomegranates and figs. My persimmons, loquats and jujubes are doing well, but they are still babies. Watching them grow (and researching obsessively in the downtime) is so much fun! I'm afraid I haven't had as much luck with pears. Do you grow a particular variety?

Persimmons do really well here, too--but I haven't tried jujubes. That may be my next addition! Unfortunately I have no idea what kind of pears ours are--they were planted by either my grandmother or great-grandmother and just sort of grow wild out beyond the borders of the yard. They're a round pear, kind of golden skinned, but I've also seen more traditionally "pear-shaped" pears around other ranches and houses in town. But I have noticed that the pears I've bought from the nursery or feed store do poorly, even if they're supposed to be suited to the area. I guess they had hardier pears back in the day? The biggest problem with our pears is that coons get them before they're ripe enough for us! Dad says they used to nail tin around the trunks of the trees before the pears ripened so that nothing could climb them, but now everything is so grown up that critters can just travel by branch/vine without climbing the trunks. I don't know if the pears are particularly beloved of our local wildlife, or if it's just because they're further away from the house (and dog) than most of our fruit trees. We have a pomegranate even further away, though, and nothing really bothers it unless they get so ripe they split open.

posted 5 years ago
P.S. Have you tried growing any citrus? We have to cover ours a few nights every winter when it gets below freezing, especially when they're young, but we've had excellent luck with grapefruits (Rio Red, so incredibly delicious), kumquats, lemons, and some of our friends have satsumas and mandarins (I just planted a satsuma, along with a key lime, an avocada, and a navel orange, but I don't know how they'll do yet). And if you planted them more intelligently than we originally did, to take advantage of thermal mass from a wall or a southern exposure, etc., you might get away without having to worry about freezes.

Andrea Hooper
Posts: 28
Location: College Station, TX Zone 8b
posted 5 years ago
I keep my satsumas in pots. I am afraid to put them in the ground on the off chance a freak cold comes along. I may have to chance it with the grapefruit, though. I love 'em!!

Andrea Hooper
Posts: 28
Location: College Station, TX Zone 8b
posted 5 years ago
Jennifer,
Are your pears out in the open? I think I may have found a spot for a couple, but they will be underneath some pretty big oak trees. Light gets in, but it definitely isn't "full sun".

posted 5 years ago
Ours are partially shaded by live oaks, and they do well. I've noticed that with the intensity of sun we get here, most fruit trees that allegedly need "full sun" do just fine in the shade (often better than in the sun) and still fruit well.

Andrea Hooper
Posts: 28
Location: College Station, TX Zone 8b
posted 5 years ago
Thanks! BTW, I don't know if you have seen this joint, but I thought I would pass it along. http://www.justfruitsandexotics.com/JFE/ They are a great source of information on our particular climate. I have ordered a few things from them, including some paw paws fit for our climate, and they are doing wonderfully. It was a bit pricey, but now that I have parent trees that fit our climate, I can replant seedlings at will. I am hoping to outfit the neighborhood. "Sure I'll buy your girl scout cookies and your band chocolate, but first, let's go plant this free tree." haha. Stealth.

posted 5 years ago
Oh, that site looks excellent! I've been wanting some pawpaws of my own. And I support your stealthy plan, haha.

Minka Bug
Posts: 18
Location: gweiloville, North Carolina
posted 5 years ago
Anyone know of a way, aside from growing indoors or in greenhouse, to grow loquat trees in North Carolina?

posted 5 years ago
Hi Minka, I'm not sure how cold it gets in your area, but you might have some luck with planting against a south-facing brick or stone wall, or trying a sun trap hugelkultur mound like the one I have illustrated below. It's meant to be a top view looking down at the hugel, which opens in a "C" shape to the south (sorry for my poor drawing skills). I have no experience doing this myself, but have heard about others doing so, with the effect of creating a warm microclimate that allows one to grow plants adapted for one or two zones higher (warmer) than one's normal zone. I didn't really draw it to scale, so you might want to make the "C" larger and have it wrap around the tree more. You could look into it more for optimal sizing/positioning; like I said, I haven't done it myself, so don't really know what works best. 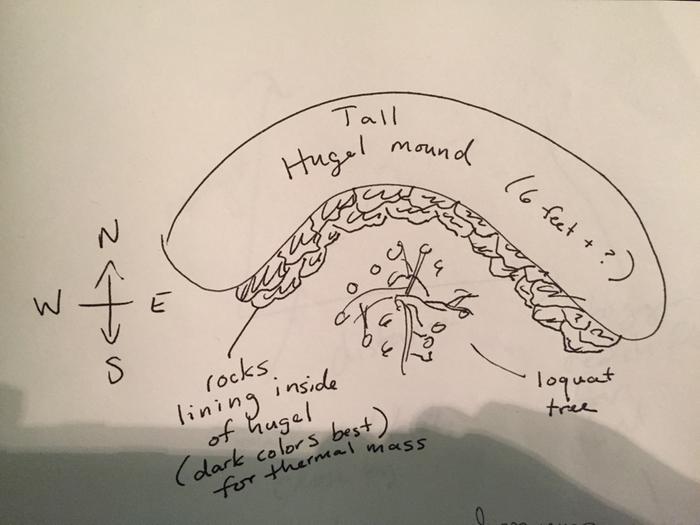