Posts: 965
Location: ZONE 5a Lindsay Ontario Canada
11
posted 10 years ago
The picture is NOT to scale. The width of the suntrap is 200 feet and the length will be around 300.

The water table on my land is high and in the spring the land in this field does become saturated to the point of near standing water but there is no standing water once the summer heat hits. the soil is extremely sandy for the first three feet or so, and then you hit a light grey coloured clay that is about the consistency of playdough. I'm not sure I need to but if the pond doesn't hold water I might use the gley method.

The ponds will be rainwater fed, though I was thinking it might be a good idea to run canal's joining each pond. There are already natural shallow spillways every 30 feet or so in the field.

I have a row of 7 of 50' X 5' hugelbeetes running north-south already built, with more in the works. They are on a slight grade that is almost non-existent but it is there. The row of hugel pictured south of the straight north south beds have yet to be made. They are on an angle because the slope at that point becomes more drastic, and diagonal direction is what Sepp Holzer recommends to do in order to not slow down water flow too much which could dry up downhill beds, which could happen if I ran teh beds straight east-west.

Now I'm coming to the point where I need to think about using the backhoe I rented until tuesday for ponds and swales...

North of the beds I was thinking of having a 10' wide path for tractor/truck access, and a swale on the north side of this path. Maybe I should have this in reverse; the swale about 4 feet north of the hugel, and then teh 10 ' path to the north of the swale?

To the north of thid I was thinking of adding the two ponds with keyhole type peninsula's to grow blueberries etc. and a berm around it. The black lines in the rectangular ponds represent keyholes.

Trees would be planted on all the berms to cast shade. Sunflowers would be used yearly until the trees shoot up.

Does this plan look sound? What changes would you make?
Suntrap-Diagram.jpg 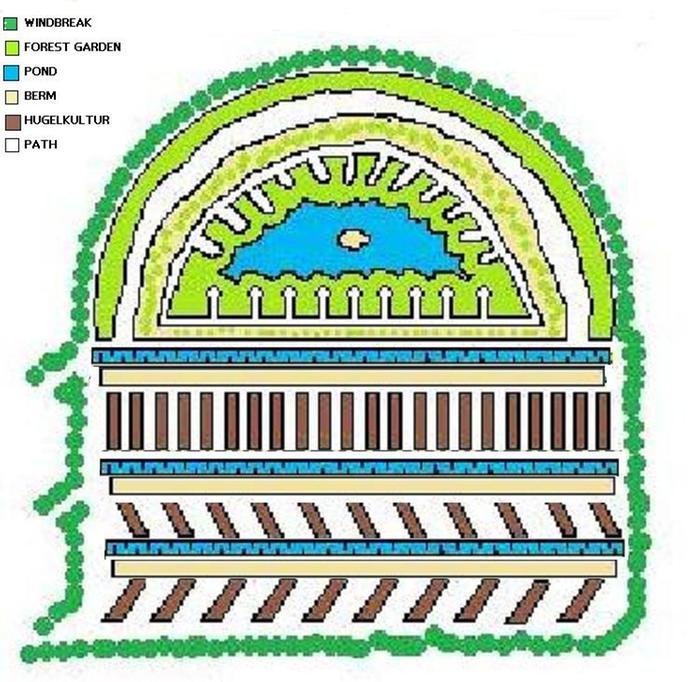 Brenda Groth
pollinator
Posts: 4437
Location: North Central Michigan
26
posted 10 years ago
that is the type of soil we have..topsoil (black) over sand over a grey clay..and our pond holds water, in the clay, but we have no inlet so it will drop with the groundwater levels during a drought and fill back up as we get rain or snow

we plan to dig it deeper so more of it is in the groundwater level, so it will remain full..this means your banks are higher when the water levels drop down..so you might want to really slope one bank well so you can get access into the water if you need that or your animals do..but dig it quite deep unless you have freshwater inlet

mine is at the lowest point on our property near our house, however, there is an overflow drain that drains lower toward a river a mile behind our house..and there are swampy areas between here and there..someday if we get a freshwater inlet then the water will overflow out into that ditch and drain toward the swamps (they could use the water they tend to dry out in June and July and early August)..

we had hoped to dig out our pond this next weekend, but there is a lot of rain in our focast so that may not happen..we also were hoping after finishing this to try to put down a flowing well and hit a spring so it would flow into the ponjd..but we may have to wait until next year

Posts: 965
Location: ZONE 5a Lindsay Ontario Canada
11
posted 10 years ago
Thanks for the info Brenda. We ended up digging a hole that is roughly 50' X 30' and about 12 feet deep at the lowest level. I found out that you need a permit to dig a pond so what I dug is a 'frost sink' !... It hasn't rained since construction but there is accumulation of water in the very bottom, which may only be from dew. I'm hoping I don't have to gley this beast. We've got high berms on all sides, with a few gaps for walking access and airflow.

Posts: 965
Location: ZONE 5a Lindsay Ontario Canada
11
posted 10 years ago
While we had the backhoe here we dug out a trench for the western windbreak that extends from the south end, right up parallel to the north tip of the hugelbeetes. I'm kinda perplexed as to how to survey out the curved part of the windbreak but I think I just need to figure out the increments that make for a good angle. My one idea was to use a 100 foot string, have one person standing in the center, and the other going around the curve and flagging it.

rose macaskie
Posts: 2134
9
posted 10 years ago
Nice drawing.
If you grow lots of plants with roots of different depths that started creating good soil full of worms and such, would not your clay end up getting mixed into your sand?

Did not Chelle Lewis say that ponds that have a rubber sheet as their base, work in the long run because gley forms in the anerobic situation that exists under the rubber sheeting so making a modern pond can be an easy way to get an old fashioned gley based one.  agri rose macaskie.
rose macaskie
Posts: 2134
9
posted 10 years ago
If its a sun trap don't you have to draw south east west and north and leave the pond open, unshaded, on the south side? agri rose macaskie.
Travis Philp
gardener

Posts: 965
Location: ZONE 5a Lindsay Ontario Canada
11
posted 10 years ago
Thanks Rose. It's a bit crude but I think it gets the idea across. The 'frost sink' we dug looks nothing like the one on the drawing. We got a little carried away with the backhoe and the deeper we went, the wider the pond had to get. Ah well.

The way the 'frost sink' ended up, I think there'll be enough clay on the surface to hold the water. I could be wrong but I think Sepp Holzer recommends putting trees on the south side of a pond to cast shade which helps limit evapouration.

rose macaskie
Posts: 2134
9
posted 10 years ago
I could be wrong but I think Sepp Holzer recommends putting trees on the south side of a pond to cast shade which helps limit evaporation.
Sepp holzer  may have talked of putting in a hedge on the south side of the pond in one of his explanations  but would not that have been to block out a prevailing southerly wind that could cause evaporation that would cool down the air? Maybe he put a hedge on the south side to cut a southerly wind not a big screen that would block the sunlight from heating up the pool.
If you want it hot, don't you have to have the sun pouring down on the pool so that the surface of the water will relfect the heat and light up around it like the reflector of a solar oven and if you want it to make the air cold you have to screen out the sun with a screen on the south side and let in prevailing winds that will cool it all down.
The two considerations the direction of prevailing winds and the diretion of the sun may mean that you wanted to put the screens one way for the winds and the other for the sun.
I have not really thought of the frost sink. my garden is a ravine it is al frost sink in the dip and ridges i  have not quite worked out how to manage that aspect of it yet. agri rose macaskie.
rose macaskie
Posts: 2134
9
posted 10 years ago
WHat is  afrost sink i am just guessing. agri rose macaskie.
Travis Philp
gardener

Posts: 965
Location: ZONE 5a Lindsay Ontario Canada
11
posted 10 years ago
To me a frost sink is an area with low elevation next to a high elevation (say, at the bottom of a hill or a pit)

Since cold air is heavier than warm air, the cold frosty air 'sinks' downward into the 'frost sink', leaving your high areas much warmer than if the lower elevation was not present.

Some native Americans used to dig deep trenches next to their crops if they thought frost was going to happen soon.

rose macaskie
Posts: 2134
9
posted 10 years ago
Ho, thats interesting about the dips by the crops, i did not know it could work on a small scale like that.
Also, i did know that the cold air sunk into dips like water will, but i did not know that it left the tops warmer. agri rose macaskie.