Kombucha instead of vinegar in water-bath canned pickles?

posted 6 years ago
So sometimes I end up with kombucha that ferments too long and tastes like vinegar. Vinegar and kombucha are both acetic acid ferments. I have also been thinking of making my own vinegar mostly for the purpose of canning pickles (I also do fermented brine pickles, but we like our vinegar pickles, too). So I was wondering, is it possible to substitute vinegary kombucha for actual vinegar in a pickle recipe for water-bath canning? The good cultures would be killed by the hot water bath, but I figure the acidity of the kombucha will still make the pickles keep for a year or more on the shelf like normal water-bath canned pickles with normal vinegar. Has anyone tried this? Did someone you know try this and get botulism and die? Are you a chemist who can tell me why I am / am not likely to get botulism and die? Please share.

Cristo Balete
Posts: 853
Location: In the woods, West Coast USA
144
posted 6 years ago
Jennifer, I make kombucha, too, and it does get quite vinegary. This site says kombucha, at the drinkable stage, is 3.2-2.8 on the pH scale

So seems to me that kombucha, left to get really vinegary ought to do just fine. If you wanted to get a little kit to test the pH of your kombucha, you could do that too.

Posts: 5696
Location: Cache Valley, zone 4b, Irrigated, 9" rain in badlands.
2276
posted 6 years ago
I am a chemist... The problem with using homemade vinegar or soured kombucha in home canning is that the amount of vinegar in them is unknown... There are simple tests (for a chemist) that can be done to calculate the amount of vinegar in a solution, but they don't strike me as the kind of thing that non-chemists would be doing at home. Canning recipes are calibrated to use sufficient acidity to inhibit the growth of botulism. The spores are still alive after water bath canning, but can't grow because of the acidity. Too little acid allows them to grow. Even though I make my own vinegar, I don't use it for canning, since it's much easier, less expensive, and safer to buy pre-calibrated vinegar.

Now for the technical details... Kombucha contains about 0.5% alcohol, so the maximum acetic acid (vinegar) concentration would be less than 0.5%. Commercial vinegar contains 5% acetic acid. So the kombucha would contain 10X less vinegar per cup than the commercial vinegar.

posted 6 years ago
If you know how to ferment, why not just make real pickles? They will store for 2-3 months. Any longer, they are still good, just a little soft, then which you can turn into relish, or pickle bread, or add to a tomato BBQ sauce with some homemade rootbeer. Keep your overaged kombucha for dressings.
Angelika Maier
pollinator
Posts: 1435
Location: cool climate, Blue Mountains, Australia
22
posted 6 years ago
There are actually a lot of very nice vinegar recipes. The kombucha idea is great, as vinegar, other than white vinegar is expensive. I do not buy vinegar which comes in plastic bottles, sonething acid in plastic scares me.
Please tell me how it goes! I would however think that kombucha changes the taste.

Cristo Balete
Posts: 853
Location: In the woods, West Coast USA
144
posted 6 years ago
I was just looking up how to do those pickles in a crock, they look great:


Joseph, why wouldn't testing for pH work? She's not talking about the drinkable version of komucha. She's talking about when it sits much longer and gets very vinegary.

posted 6 years ago
Thank you everyone for your replies! I really appreciate them.

Joseph, if you see this, would you mind clarifying something for me--it seems that you're focusing on actual vinegar/acetic acid concentration of the kombucha as the critical factor for safety, versus just the pH--so even if the kombucha was at a sufficiently acidic pH, that wouldn't necessarily make it safe for canning? I ask because kombucha of a pH of ~2.4 or so, comparable to distilled white vinegar, is achievable, but it seems that a similar concentration of acetic acid as white vinegar is not, and it is the pH I have always heard discussed with regard to canning. Also, I can more easily test the pH at home with strips than test the acetic acid concentration via titration. In the meantime, based on what you've said, I think I'll refrain from using the kombucha for canning, although I believe I will try making some refrigerator pickles or pickled eggs (which stay refrigerated) in it just to test the flavor, since those will not be pickling long enough to go bad and will remain refrigerated the whole time.

As for making fermented pickles as some of you suggested, I already do that as I mentioned, but we prefer the taste and texture of vinegar pickles when it comes to sandwich rounds and spears (whole baby cucumbers are delicious as fermented brine pickles, however). I do fermented pickles of all sorts (not just cucumbers) as well as sauerkraut in crocks.

I also ferment quite often in mason jars with airlocks. They are convenient for small quantities and experimental combinations, they cut down on mold, and they are less messy. I'm including some pictures so y'all can see the set up. The first is of all the parts needed: the flip cap; the airlock; the rubber stopper; a weight to keep your vegetables from floating up to the top (again, cuts down on mold if you keep them submerged)--you can also use a rock (boil it to sanitize) or any heavy thing that will fit in the jar; and the mason jar itself. The second is of the whole system put together (minus the water in the airlock and the contents of the jar). The third is of a jar of fermented carrot-ginger pickles that I had sitting around. You can see that once the airlock and stopper are removed, you can just close the flip cap and stick it in the fridge (to prevent it from fermenting further) or on the shelf. The disadvantage is that it uses a lot of plastic; although the plastic doesn't touch the food, it is far less sustainable equipment than pottery crocks.

The procedure is simple: Chop/slice up your produce and put it in the jar, leaving a couple inches of headroom. Mix up your brine (varies depending on what you're pickling; 1 Tbsp. salt to one cup water makes a pretty strong brine; you can also re-use brine from previous ferments as a starter, in which case you can make up the difference with a somewhat less salty brine). Pour the brine over the veg and use the weight to trap all the pieces below the brine; remove any that escape or tuck them under. Make sure you have at least an inch of brine over the top of the vegetables. Put water in the airlock, put the airlock in the stopper, put the stopper in the cap, and put the cap on the jar. Put the jar in a dark place where it can remain undisturbed for a while. Leave it for anywhere from a week to a few months, depending on taste and whether you used a starter (you will get a better idea of how long of a ferment you like once you've done a few batches). Stick it in the fridge to stall the fermentation if you want to keep it at a certain level of flavor.

You can also use techniques that use mashing, massaging, or other techniques to take advantage of the vegetables' own juices (such as is traditional for sauerkraut) rather than just pouring brine over them.
IMG_0392.jpg 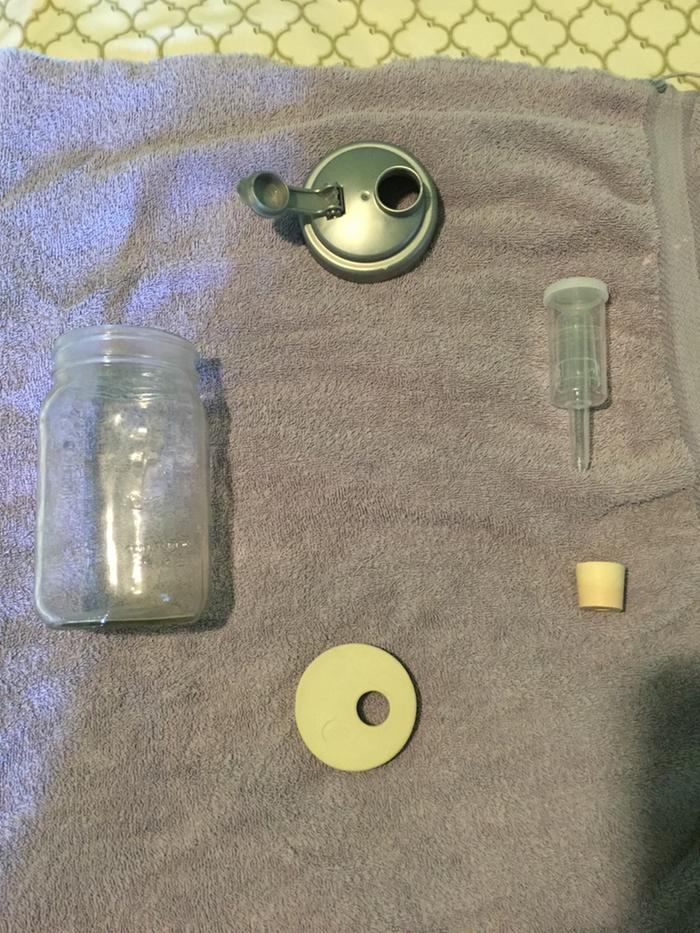 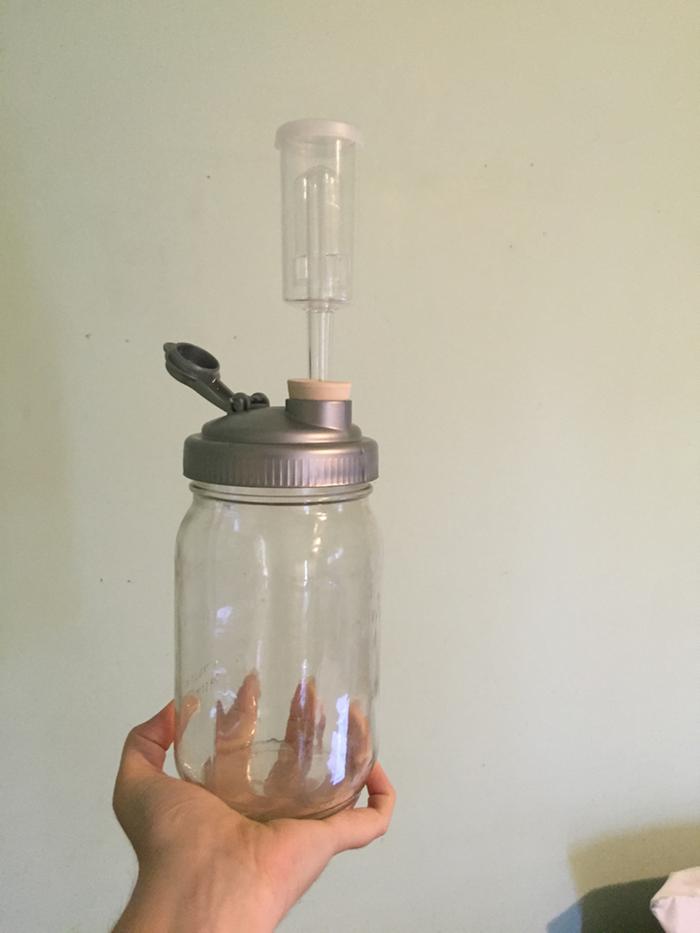 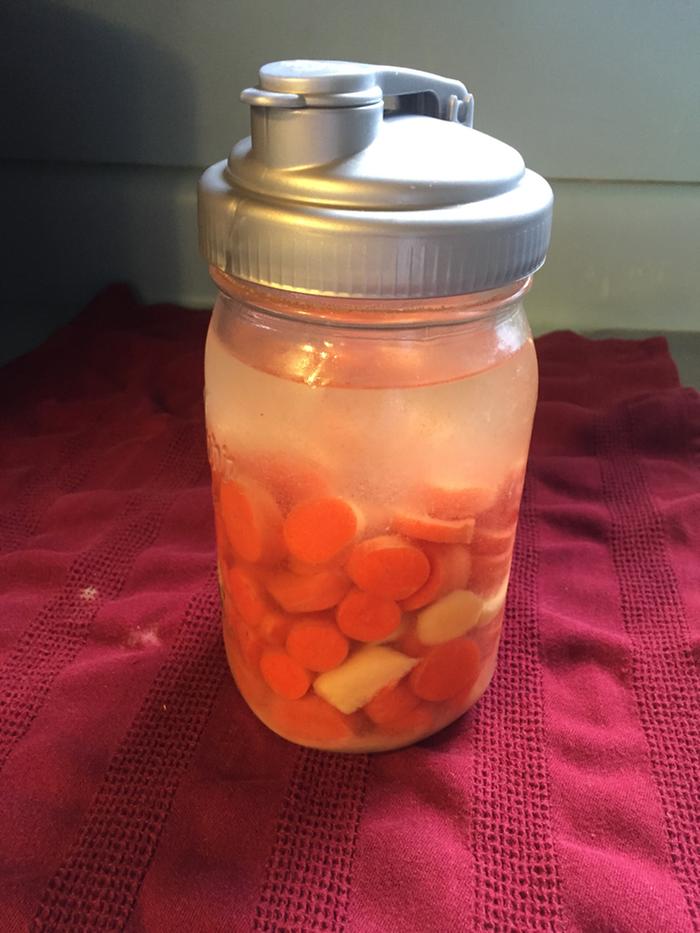 Cristo Balete
Posts: 853
Location: In the woods, West Coast USA
144
posted 6 years ago
Jennifer, thanks for the great recipe and the photos. I've never seen lids like that. Good to know

posted 6 years ago
You're welcome, Cristo!

As for the lids, Amazon sells the components:


And you can get them in complete sets of two from FarmCurious:

Posts: 5696
Location: Cache Valley, zone 4b, Irrigated, 9" rain in badlands.
2276
posted 6 years ago
Conducting an accurate pH test at home isn't something that is simply and reliably done... It's hard to read paper strips. Electronic gadgets are prone to errors. PH is on a logarithmic scale, so a difference between 4.0 and 4.3 is a dramatic difference in acidity, not the minor difference that it seems like when thinking on a linear scale.

Very vinegary to the taste may be different than very vinegary in percentage acetic acid. The chemical equations for making vinegar suggest that it requires a sugar solution of approximately 12% to end up with a 5% vinegar solution. The kombucha recipies I looked up this evening start with 5% sugar, so the percentage vinegar could be expected to be no more than about 2%. The most common mode of failure for vinegar at my place, is for the vinegar to get consumed and disappear from the jug, leaving water behind.

Posts: 5696
Location: Cache Valley, zone 4b, Irrigated, 9" rain in badlands.
2276
posted 6 years ago
Jennifer Richardson: My best guess, is that a bogus, non-fact checked series of pH claims got posted by some web site or other and then got widely distributed across the internet as if they were facts... (I read sites just now that claimed that the pH of 5% apple cider vinegar was anywhere between 2.3 to 5. I believe the 2.3 figure, but not other figures.) The pH of fresh apple juice is around 3.4. The acids that are in the juice do not disappear when fermenting, so I'd expect a 5% vinegar made from apple juice to have a pH which was slightly lower than the pH of 2.4 (this is a calculated value, not a WAG) for a 5% solution of white vinegar. I think that kombucha could easily achieve similar pH and concentration of vinegar if the fermentation started out with about 12% sugar.

posted 6 years ago
Joseph, thank you very much! That makes a great deal of sense.

posted 5 years ago
I think you could use the over done kombucha as a starter for a ferment and might get some good and different results maybe.