Troye Haalverson
Posts: 1
posted 6 years ago
Hey y'all,
I've been on this site for months absorbing all I can to help me with my project, but I am stumped! It's a half acre rectangle of nearly flat land that was originally sagebrush, fescue, high desert veg, etc. until settlers killed and scrapped it all away 100 years ago and installed a massive seasonal (April through October) regional irrigation system diverting river water from the Snake River. So now this land is an artificial pasture of grass and clover. Without the summer irrigation it would surely go back to sagebrush, but not before monster weeds like tumble weed and Scottish thistle have their way. Anyway I'm not complaining. I'm glad to have it and I'm excited to turn it into a sustainable edible forest, or as close as I can get in this climate, which is about 9 inches of rain and 18+ inches of snow per year.

The big question for me is the irrigation. I know it's not sustainable or optimal for the soil (they put some kind of algae killer in the water, and the weekly flooding means mulch is difficult to keep in place). However the system is there and cheap to use. The large pioneer trees nearby would not be here without it, which are a great resource for leaves in autumn and branches which regularly break off due to high winds. I waffle back and forth between designing with or without the irrigation. Without it seems like the most difficult approach. Family and neighbors would think I'm crazy. The dry climate wouldn't support the entire range of plants I want, however it is the purest option. The soil would build naturally, albeit slowly, as would the plants and trees. It could be very beautiful and romantic. There is a well of course with very clean water I could use for young plants. I could capture rainwater and snowfall from the roofs, and recycle greywater. Some days I really lean towards this approach because of the challenge and the harmony with the original landscape.

Then some days I think of doing a compromise where I designate a flood irrigation path between and around planting areas that are slightly raised and covered in wood chips/mulch/etc. The water wouldn't wash the mulch away, but would still sink into the ground for any roots directly under the path, also I'm assuming there might be a sponge affect with organic material alongside the flood paths. The challenge of this approach is getting the additional soil for the slightly raised planting areas (4-6").

posted 6 years ago
I can't recommend highly enough Brad Lancaster's book "Rainwater Harvesting for Drylands Volume 2" for anyone wanting to do permaculture in a dry place. http://www.harvestingrainwater.com/

He advocates making basins, and planting within them, rather than using the swales more common in wet areas. Basins work well in small spaces and around existing vegetation. Basins would work with flood irrigation if you link them together with channels. You might want to irrigate only for the first few years while trees and perennials become established. 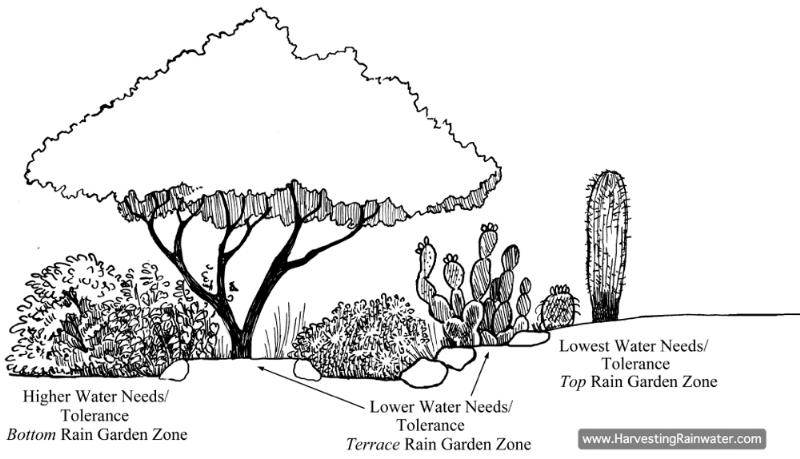