posted 4 years ago
Researchers at the University of Illinois have shown that applying artificial fertilizer changes the genome of the bacteria that live commensally in nodules on the roots of "nitrogen fixing" plants like clover or beans. 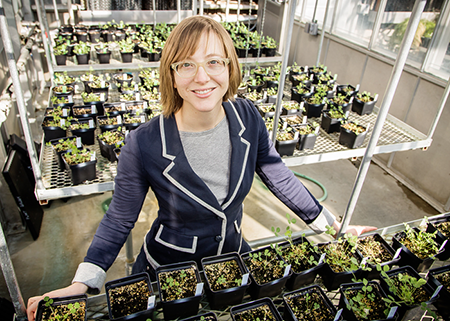 University of Illinois plant biology professor Katy Heath and her colleagues pinpointed the area of genomes within nitrogen-fixing bacteria in plant roots that’s being altered when the plant is exposed to nitrogen fertilizer. (Photo by L. Brian Stauffer.)


“Humans are dumping fertilizer everywhere,” Heath said. “And so one thing we were interested in asking is whether long-term nitrogen additions would disrupt this long, many tens of millions years old symbiosis that is pretty important to the ability of legumes to compete in natural ecosystems.”


Heath said that they are continuing to study the topic. She believes that the findings have significant implications as societies deal with a changing environment.

“Why does it matter if we can synthesize nitrogen and dump it on fields anyhow?” Heath said. “It matters because we’re looking for more sustainable solutions. I think we’re looking to not add tons of human-fixed nitrogen, which is a super energy-intensive process. Rhizobia are really special because they can do it themselves.”