I'm really far behind this spring. I guess compared to most years I'm not far behind at all, but I haven't been taking advantage of the extra-early spring like I should have.

I did throw together a small raised bed against the south side of a barn back in April. It's pretty far back under the eaves, which I was hoping would help keep the cold air from falling directly down on it. This also means that rain doesn't fall on it, and I haven't been good about watering and weeding. The swiss chard has entirely disappeared beneath nettles and what I'm hoping are lambsquarters. The spinach and onions are doing okay, and I haven't given up on the beets.

The garlic I planted last year has come up and looks to be doing very well. I planted about 200 cloves.

My aunt brought me some unnamed garlic from Fred Meyer. I was pretty skeptical so I planted it way out in the field where I send most of my experiements to die. A few of them actually came up!

We found some onions that had overwintered in the garden and started coming up. I tried separating them and replanting some of them. I didn't finish before the mosquitoes ran me off. Do you think they'll do anything or just go to seed?

I haven't been keeping up with the chives in my grandma's greenhouse.

I'm trying soil blocks for peas, beans, squash and melons this year. Things that don't like having their roots messed with. I'll try to get some pictures of our nursery, these are just some that we had no space for so we stuck them outside.

Tyler Miller
Posts: 115
Location: Trapper Creek, AK (3a)
9
posted 4 years ago
My grandmother's crabapple trees are in bloom and looking spectacular (aside from the branch I tried and failed to graft to).

The chokecherries are also in bloom.

We have a lot of rhubarb plants, but most years we can't keep up with this monster. We've been pulling flower stocks for a week already.

My cousin and I are going to try to make rhubarb ketchup this weekend.
Tyler Miller
Posts: 115
Location: Trapper Creek, AK (3a)
9
posted 4 years ago
The horseradish I planted last year is up.

The maximilian sunflower I planted seems to have survived the winter as well.

One of the honeyberries I planted has flowers, but the rest don't so I figure I probably won't get any berries from them this year.

A few of the currants I planted last year have bloomed, and we have more mature ones nearby, so I have high hopes.

I had a bunch of different kinds of honeyberries and currants I planted last year, but the stupid chickens pulled the tags out of all of the pots and scattered them around!
Corey Schmidt
pollinator
Posts: 228
Location: Kachemak Bay, Alaska (usda zone 6, ahs heat zone 1, lat 59 N, coastal, koppen Dfc)
26
posted 4 years ago
thanks for the fotos, Tyler, I really enjoyed them! I have a couple of questions: is the chokeberry edible, and is it the same as 'bird cherry'? and what kind of garlic is it that looked really good and where did you get it?
Tyler Miller
Posts: 115
Location: Trapper Creek, AK (3a)
9
posted 4 years ago
Thanks! Chokecherries are edible, although eating them raw is an acquired taste. Most people use them for pies, jelly, and other food where sugar is added.

There are several different types of chokecherry, and Bird Cherry (Prunus padus) is probably the most common in Alaska (usually called Mayday tree). I'm pretty sure the chokecherries we have around here are bird cherries, although I couldn't swear to that. They are supposed to be invasive, but a bunch of people in Trapper Creek have planted them and so far nobody has found anywhere other than where they were planted. That's the tricky thing about Alaska, it's a big place and some things that are invasive in some areas are benign in others.

I want to start growing Amur Chokecherry (Prunus maackii). I got some seed but I couldn't find it until it was too late for this year. I've heard mixed reviews on the fruit, but the biggest reason I want to grow it is that it has amazing exfoliating shiny copper bark. They have a lot of it up in Fairbanks.

I ordered my garlic from Filaree Garlic Farm. They were recommended because they understand that we need to plant earlier in Alaska and will ship things special for us. In Alaska the hardneck varieties of garlic are what most people grow. Hardnecks are much more likely to survive the winter and are supposed to be more flavorful than softneck varieties, but they aren't as productive and don't store as well. Softneck garlic is what is mostly available in grocery stores.

I'll see if I can dig up the notes from a presentation I went to. This article was written by the ladies who gave the presentation: Growing Garlic in Alaska.

K Putnam
pollinator
Posts: 247
Location: Unincorporated Pierce County, WA Zone 7b
26
posted 4 years ago
I love all these photos. I grew up in Eagle River and have often wondered what it would be like to garden in Alaska as an adult. My first gardening efforts as a young child involved sticking pansies into what was essentially cold rocks and wondering why they wouldn't grow. In elementary school, we actually learned quite a bit about the native plants and went on full-day field trips to gather berries and visit local farms, but that education seemed to drop off once we got to middle school and beyond, which was too bad. So, my memories about plants in Alaska are dim nostalgia from the 1980s.

Speaking of the chokecherries, I just started a country wine from our local "indian plum" oemleria cerasiformis which looks like it is going to be something pleasant and interesting. I think I'll finally invest in a steam juicer if I'm going to try that again, as it involved me pulling on latex gloves and squeezing the pulp off the seeds in hot water...it wasn't hard, just messy. But, that's something you might consider with a bumper chokecherry crop.

K Putnam wrote:Speaking of the chokecherries, I just started a country wine from our local "indian plum" oemleria cerasiformis which looks like it is going to be something pleasant and interesting. I think I'll finally invest in a steam juicer if I'm going to try that again, as it involved me pulling on latex gloves and squeezing the pulp off the seeds in hot water...it wasn't hard, just messy. But, that's something you might consider with a bumper chokecherry crop.

I don't like most wine, but the wine we've made out of rhubarb has been pretty good.
Corey Schmidt
pollinator
Posts: 228
Location: Kachemak Bay, Alaska (usda zone 6, ahs heat zone 1, lat 59 N, coastal, koppen Dfc)
26
posted 4 years ago
An update on garden progress this year:
sagittaria latifolia grew all summer and multiplied tubers.  Corylus americana and corylus avellana "mcdonald"  grew well all summer, as did aronia melanocarpa.
sunchokes multiplied enough that we started to eat them.  One flowered this year but the seeds did not mature.  stachys affinis also grew and multiplied this year, we ate a few.  We grew 42 lbs of potatoes in a 47 square foot patch.  Store bought green onions planted in a garden bed after we ate the tops grew well all summer and are still giving us green onions now in November.  2 hardy kiwis (actinidia kolomikta) thrived in pots in potting mix, there were even a few delicious fruits this year and about 6' of vine growth.  the other 2 I planted directly in the ground and they got a disease and died.  (potatoes had been grown there...) 3 'bouche de betizac' chestnuts leafed out and grew all summer outdoors in pots in local soil.  Dioscorea batatas also put on significant but not huge vine growth outdoors in a pot.  Apples did well outdoors here all around.  I ordered 40 pinus koraiensis plugs for next spring, as well as 30 hybrid chestnuts and 50 hybrid hazels from badgersett, still waiting for confirmation, and trying to decide on my Lawyer's nursery order for next year.

I couldn't figure out how to rotate these images.  they show up properly on my phone and computer and even when rotated with a program on my computer still come up sideways here... 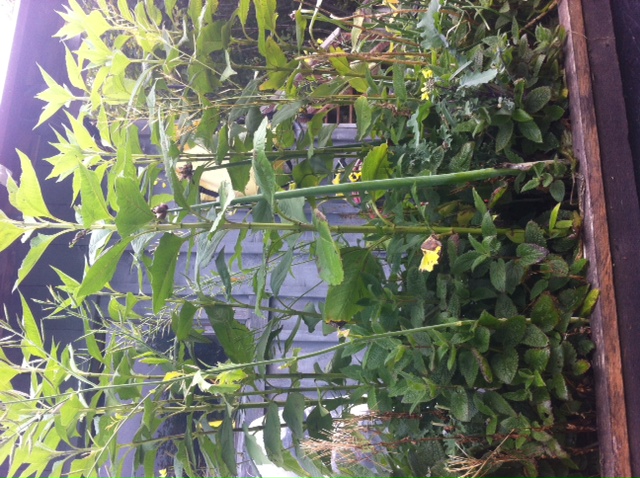 Corey Schmidt
pollinator
Posts: 228
Location: Kachemak Bay, Alaska (usda zone 6, ahs heat zone 1, lat 59 N, coastal, koppen Dfc)
26
posted 3 years ago
reflections:
Mcdonald hazelnut grew about 4 feet over 2 growing seasons.  The growing bed was grass sheet mulched with cardboard and mulched with alder logs and grass clippings, with judicious additions of human urine.  Aronia melanocarpa seemed to also thrive under these conditions.   both sagitarria latifolia and bouche de betizac chestnut did not survive last winter, presumably because they were in small pots, or perhaps in the case of the chestnut because the wood did not ripen.