This experimental structure is built as a prototype for sustainable techniques using only natural biosphere materials.  This eccentric building represents what Bernard Rudolfski meant by the term 'architecture without architects.'  Yet this building is architecture, it is a realized conceptual experiment in delineation of form and space and it bears the mark of its maker.  A beautiful complex curved roof, the inspiration for the house's name, hints at biomimicry or 3D digital influence yet was probably realized by taking advantage of the natural warping of the thin rafters.  Walls are lime-plastered, straw bale in-filled between the frame, supported on a gravel/concrete trench foundation.  The roof is wooden roofing shingles and the floor is poured earth.  The structure is breathable and well suited to a passive solar heating system. 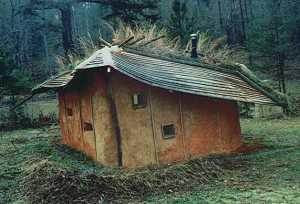 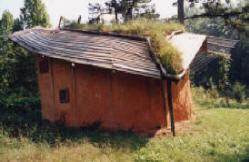 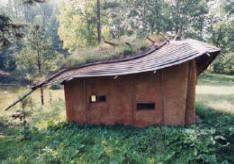 The structure above is a design/build project completed in 2001 by students Abelman, Bertilus and Massell who used recycled materials and those found on site.  They won the International Design Resource Awards (IDRA) 2001 Honorable Mention Award, and according to their comments from the IDRA site, "The Clam House is a design/build student project constructed in a working farm in South Carolina. We began the design process by first carefully choosing a sire and studying its ecology, and then deciding on a palette of sustainable materials from which to build. The Calm House is situated on a gently sloping hill above a natural pond. It’s broadest curving face is pointed directly to the south to benefit from passive solar heating and direct light. The materials we chose were generated from an on-site analysis of what was available: straw bales from the farm, fine sand, bamboo from local groves, oak and pine thinned from local stands, highly pigmented clays, recovered railroad ties, salvaged glass, and ample amounts of horse manure…."

In 2001 Nik Bertulis commented, "We are experimenting with a system where recycled carpet is laid underneath our native sod to act as a stabilizer, drainage mat and moisture collector. So far it's working pretty well."

ardilla Deneys
Posts: 11
posted 10 years ago
Well that half living/half wood roof is brilliant. I love it esthetically and practically because one could still collect rainwater.
How would one go about doing a half and half roof?