nathan luedtke
Posts: 165
37
posted 6 years ago
Allow me to draw your attention to Laurie Baker, who is known for developing beautiful sustainable buildings in India, using traditional construction methods and natural materials.

I searched for him on the forums but didn't find anything. He passed away in 2007 and has many buildings standing in India, but I've found that he's much less well known than some of his contemporaries like Christopher Alexander. 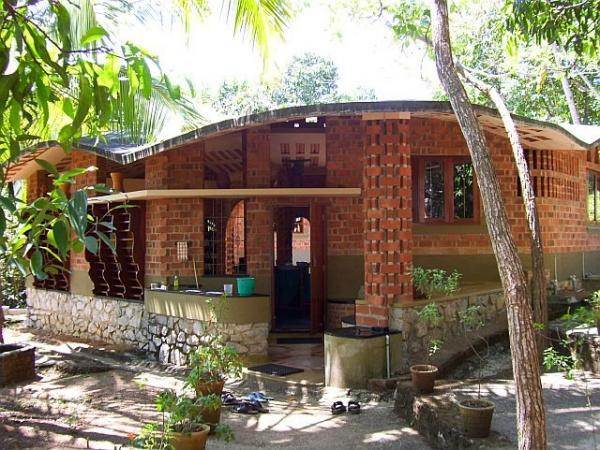 ‘‘Sustainable design and ideology which embraces the natural processes of the earth as its reality must replace conventional design practices’’- Ar. Didi Contractor

Laurie Baker was a great invator with vernacular materials and beautiful designs. If you have enjoyed studying his work, you may also find of interest these two remarkable people and their work.

Some nice photos there.
nathan luedtke
Posts: 165
37
posted 6 years ago
Thanks for the reply, Jay.

Adding Didi Contractor and Revathi Kamath to my "shelf of architects". Along with Christopher Alexander, Hassan Fathy, Nader Khalili, and Mr. Baker.

I'm especially interested in vernacular architects who don't just build, but go on to fully prove out their method with cost, materials, and labor accounting. Alexander did this in The Production of Houses (about a community construction project in Mexicali, Mexico), and updated his construction management system in The Battle for the Life and Beauty of the Earth: A Struggle Between Two World-Systems about his design and construction of the Eishin School campus in Japan.

Hassan Fathy describes an innovative system of community organizing/contracting to mobilize poor communities in building quality mud houses in his book Architecture for the Poor: An Experiment in Rural Egypt.

Not quite the same thing, but Laurie Baker wrote a list of architectural principles that are just as easily applied to any permaculture project. (photo below)

Photo is from the Natural Building Blog. 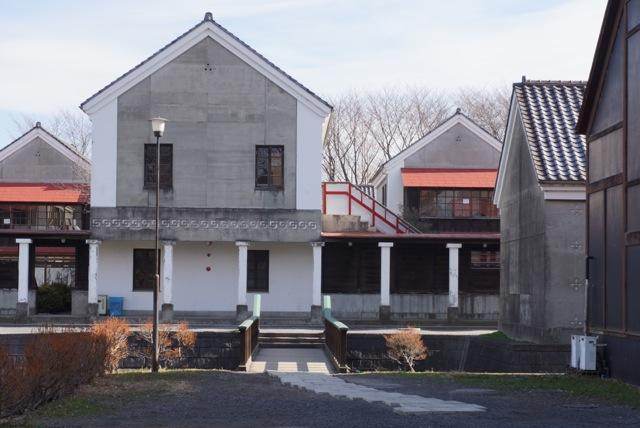 Photo is from this article. 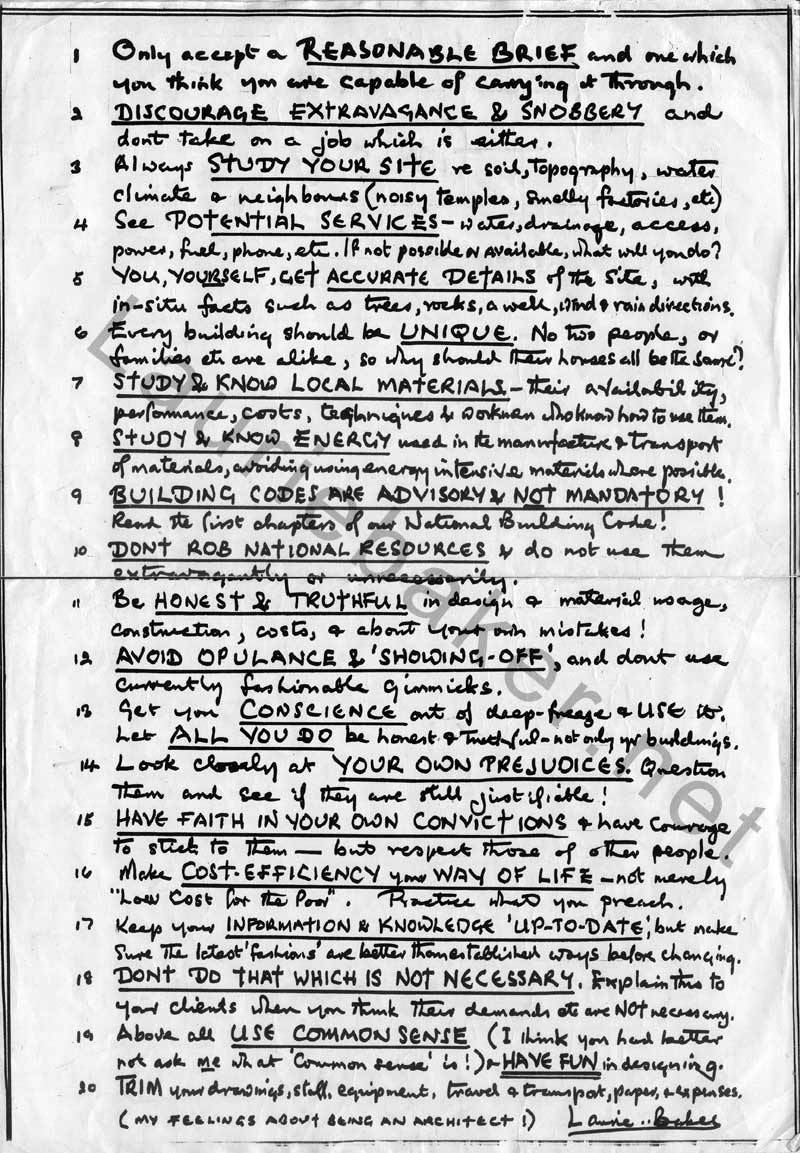 posted 5 years ago
Wow, thanks everyone, those look like fabulous links!

I spent two days at the Sambhaavanaa campus in Himachal Pradesh recently, where most of the buildings are designed by Didi Carpenter. And the Dharmalaya campus too, which is more home-scaled. Both are just wonderful to be in. Wow! She's getting really very old, so she doesn't want to be bothered by lots of visitors, but I'm dying to see some of her other houses.

Sourabh Phadke is brilliant at mobilizing groups of learners to learn and also get in the mud and build. He's managing the onsite construction at Sambhaavanaa, and he designed at least one of the buildings there, another nice one. He's led two earth building courses here at SECMOL along with Sonam Wangchuk. His website soarhub.in has loads of good cartoons and graphics about composting toilets and earth building, etc. He studied architecture but is way more hands-on in the mud than most architects.

Nripal Adhikary is a Nepali architect who works in earth and bamboo and stuff. I only met him once for a few days, but he's just great and I think he'll go places, so keep your eye on him too. (He gave us the Mud scan and lots of other pdfs, plus footage from the 1930s of a super-organized perfectly-measured German earthen building process)

Sonam Wangchuk is a Ladakhi activist, inventor, teacher, and designed our www.secmol.org, as well as several other rammed earth solar-heated buildings in Ladakh, and some compressed stabilized earth block schools in Nepal. He's currently working on an artificial glacier project but will surely build and teach a lot more earth building.

On some hard drive somewhere I have a scan of Laurie Baker's classic My Name is Mud, but my internet connection is not up to such uploads at the moment. If somebody really wants it get in touch and I'll try to upload it soon. (I'm pretty sure the late Mr Baker would approve of such sharing). We used to have the book too, a cheap large format paperback on rough paper, all handwritten and drawings, not typed. It's one of those perfect books that belongs in your collection if you're interested in these things.