Is bokashi bacteria good for soil ?

As long as I know, bokashi consists of anaerobic bacteria. Such bacteria is pathogen, isn't it ?
Anaerobic means no oxygen required, right ? So, can they live in good soil since the soil needs oxygen ?

Thanks.
Craig Overend
Posts: 29
Location: Melbourne, Australia
6
posted 3 years ago
The deeper in the soil profile you go, the less oxygen there is, making soil more of a spectrum from aerobic to anaerobic, however a lot of plant available nutrients including nitrogen are formed in the top aerobic layer where there is most microbial activity, which is part of the reason aerobic microbes tend to get the most attention and results. This in the permaculture world is the edge effect in action. 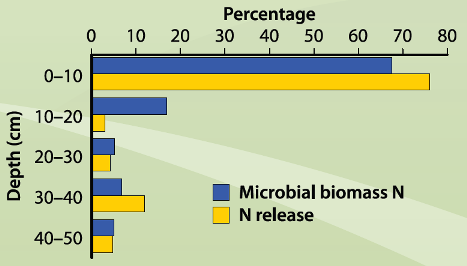 The question however assumes anaerobic microbes are all human or plant pathogens. Studies I've read suggest otherwise, and that both aerobic and anaerobic brewing will result in human or plant pathogens if the material you start the brew with contains those pathogens and creates an environment they thrive and multiply in over other organisms. This is why I believe diversity in the soil food web is important in preventing any one organism taking over and overcoming a host. That means an array of aerobic to anaerobic microbes and that means an array of feed material and environment. The reason many superbugs are super is because they work together as a collective using techniques like quorum sensing to overcome a host that may not have a diverse line of defence.

I'm no Bokashi expert but it's likely there is still some level of oxygen in the upper layer of Bokashi, especially if you keep opening the container to check it or when adding material, however it can be a pathogen to some soil organisms. It's often used to eradicate plant-based pathogens. The phenols it contains, which are weak acids, and other acids such as lactic acid produced in Bokashi have a sterilizing effect on some microbes. Bokashi can be quite acidic with a pH of 3.5-4.5 or lower apparently.
From soil microbial genetic studies I've read, acidic soil reduces microbial diversity. But as the study below mentions, the pH of Bokashi may not be a factor in plant growth when used in appropriate concentration, and used that way it's likely that Bokashi or many other Natural Farming anaerobic or fermented formulations could add to microbial diversity long-term. Especially in soils high in organic matter that tends to buffer changes in pH.

Below is an abstract from a study on Bokashi used to germinate and grow a brassica, with a recommendation of limiting Bokashi to 30% mixtures with soil by volume. Keep in mind the study only trialled one species of plant. It's probably also a good idea to dilute any Bokashi water extract before applying it.


A kind of fermented organic fertilizer known as Bokashi in Japanese has been used by many Japanese farmers for many years. Bokashi is the fermented product of some organic materials such as bran, oilcake etc. mixed with soil under low temperature (below 50 - 60 deg C) during short period (about 10 days). In this study, experiments were carried out to find the influence of application of Bokashi on germination and early growth of komatsuna, [Japanese mustard spinach] (Brassica campestris L.) by using the water extract from Bokashi and different volume percentages of soil and Bokashi mixture. The results obtained were as follows. 1) The germination percentage, stem and root length of komatsuna decreased with increase of concentration of phenolic substances in the water extract from Bokashi, and a close negative correlation was found between the inhibition on komatsuna growth and concentration of phenolic substances. 2) It was found that volume percentages of Bokashi mixed with soil should be limited below 30% because the emergence percentage of komatsuna became lower on increasing volume of Bokashi in the soil, and many plants died, to above 50% of their volume. In addition, the emergence percentage and the concentration of phenolic substances in the soil had negative correlation. From these results, phenolic substances can be used as an indicator to investigate the effects of application of Bokashi on plant growth. 3) Early growth of komatsuna on the soil applied with fermented Bokashi was better than that on the soil applied with unfermented materials of Bokashi. Consequently, it was suggested that fermented Bokashi had an effect of promoting plant growth, but the cause of promotion should be investigated further. 4) pH of the Bokashi fermented under high temperature (above 60 deg C) was higher than those fermented under low temperature (below 50 deg C), but there was no difference on plant growth between them. From this result and 3),it was found that the fermentation was important, but the different temperature ranging from 40 to 60 deg C had few influences on plant growth. 5) The number of lateral root was increased by application of Bokashi and the effects of application of Bokashi on plant growth were more effective at root growth than germination percentage and stem growth. Therefore, it was suggested that detailed investigation of root was very important in order to find the influence by application of Bokashi.

Influence of the application of "bokashi" a kind of fermented organic fertilizer on germination and early growth of komatsuna (Brassica campestris L.)  [2001]

If you want to read more about how different natural farming formulations can impact microbial diversity, the following genetic study compares a number of fermented products and sequences their genomes to see what microbes are in the formulations.

Effect of different organic formulations on dry weight of radish (a) and Chinese cabbage (b) under pot culture condition. T1 100 % panchagavya; T2 33 % panchagavya; T3 plant extract with native microorganisms; T4 commercial organic fertilizer extract with 2 % leaf soil extract; T5 commercial organic fertilizer extract with 2 % yogurt. Control, 0, 50 and 100 times of dilution organic formulations are represented in different shades. Values are mean ± SE of three replications, and same letters in each treatment are not significantly different from each other at P < 0.05 according to DMRT

Joseph Limanto
Posts: 2
posted 3 years ago
Hi Craig, That's awesome answer. I have to spend my time to understand it

Thank you very much.