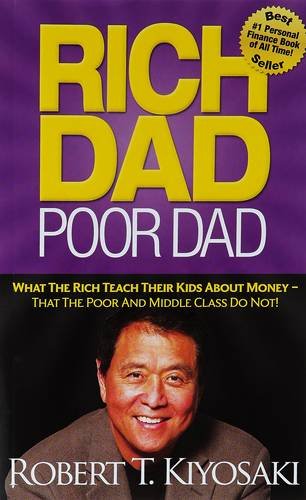 The author relates the lessons he learnt from his friend's dad who had his money work for him whereas his own dad was living paycheck to paycheck and still had a hard time making both ends meet. The main point of the book is that income-generating assets are better than most jobs.

posted 5 years ago
The guy is without a doubt; spot-on. And I do not say that lightly.

I have always said one of the biggest problems with forums is that people leave a lot of things out, and their failures are one of them. We do learn from failure, and especially in agriculture. Did you know the population of my town has never changed? I have watched a multitude of homesteaders throughout the years move into my area, only to move out about 8 years later on average. They have some preconceived ideas, enjoy rural life for a bit, see that it is extremely difficult, then go back from where they came. In the meantime, more people move in. However I have also watched a lot of conventional farmers here file for bankruptcy too. They think they can do what they always did, and somehow they will just miraculously make it, though the world around them is changing...a lot. I do not know all the answers, but one issue crops up with both types of farms; people seem to get latched onto a method of farming and refuse to change. That is what their undoing seems to be.

Always be willing to change. That is why I love permiculture. I am not sure that I am a permiculturists, but I sure practice a lot of the methods that through history and my own experience, have proven to work.

It was interesting to here about the farmer who started out with a few chickens, sold the eggs and reinvested them and now is selling thousands of eggs per year. Young people today seem to think they need to invest incredible amounts of money into farming in order to "make it", when my take is just the opposite. A rancher in Texas who is now 80 years old, has thousands of acres, and even teaches cowboys how to ranch at a working beef school, started out buying (1) cow! He did not actually buy it, he bartered for it since he worked as a stockman at a stock yard! And while I am hardly that, I started out with 3 acres of land and 4 sheep. Yes only 4 sheep. I actually purchased it with that money we got in 2008 for that stimulus package the government had handed out. It was not even my money, though throughout the years it has morphed into having hundreds of acres and my wife and I are planning our latest sheep expansion; and if approved, we will be at 900 sheep.

One of the interesting things about this guy was that he learned outside of school, and I sort of did too. I had an algebra teacher that TALKED IN A MONOTONE VOICE AND ALWAYS YELLED WHEN HE TALKED. I could not understand him because I could not get over being yelled at for 45 minutes in his class. I had to wiggle my way out of it, played like I was math-stupid and so they put me into a "dumb kids class"...business math. It was the best thing I ever did, and why today I am a numbers guy. I am always crunching numbers and talking to bankers, lenders, and the UDSA because they talk this same language.

Honestly it has been a difficult winter in some ways, and in some ways not. We are just now edging up to being the anniversary of when I went to full-time farming. With a wife that works the farm with me, every penny we make, and every penny we spend has to come from sheep, rock or trees. That is scary, and cash flow is not always the best, but we are never hungry, nor will we ever be, and ironically between the sheep, machinery, land, mineral resources, forest products, etc, ON PAPER...we are worth a few million. But here is what knowledgeable people need to know, the ability to handle the short term, intermediate, and short term assets is where a farmer can make it or lose out. The problem is, farmers have very few short term assets, everything is pretty much intermediate or long term. For example, to pay for a bill now, a farmer can sell sheep and get a fast return (same day cash), but it limits his production for next year if a ewe-lamb is sold, and less profit if a ram-lamb is sold before its fully to size. That leaves intermediate and long term assets to be sold off, and they require a longer sell-time. For example, you just can't make a phone call and expect a excavation contractor to start digging into your gravel pit and cutting you a check, that contractor has to have a need, the gravel has to be the right sized rock, and they have to be working close by. And logging has the same issues, even cutting wood off yourself requires a few weeks before the checks start rolling in. So a farmer really has to manage what they have carefully is what I am saying, and in farming that can be as far as 7 years out!

For instance, right now I am clearing 30 acres of land to make a new field. That forest was only worth $1500 an acre before I started cutting it even though it was mature forest and full of prime wood. As I cut it, my farm is actually LOSING value because what I have is 30 acres that is cut over. However, as I convert it into tillable land, and here tillable land is worth more per acre then even house lots, it will increase in value. Tillable land is worth $2500 an acre so in the end I will have increased my farms worth by $30,000 before I even factor in the additional sheep that 30 acres can support.

So the point here is that cutting the wood off is not the issue, FAILING to convert it to tillable land would be the mistake. So its an interesting line of work. But make no mistake about it, it is rewarding too. Assets may not be acquired in a day, but they are not lost in a day either.