posted 3 years ago
Building a living fence in intriguing as I have a surplus of structural osftwood species and a lack of thorny ones.

I had a day off and a couple hundred meters of living toothpicks, and I decided to see if I could cross laying a hedge with a roundpole fence.

Travis Johnson (master of Sheep and Forest TM) was discussing capable fencing and recommended two fences four feet apart. I have lazy deer and I thought they might not figure it out.

Basic schema is this:

1. Trees under 6" diameter lain over like a hedge in two rows about 4' apart with trunks at low (~1'/30cm) and high (3'/1m).  Care taken to preserve as much cambium as possible. Basically I pulled the trees with tackle after making a back cut

2. Overstory pretty much cleared to allow light at the hedgeline.

4. Vines not persecuted, trained toward the hedge. Rose and dewberries preferred.


Will update with likely failures and when/if I can figure out how to make gates!
LiveFence1.jpg 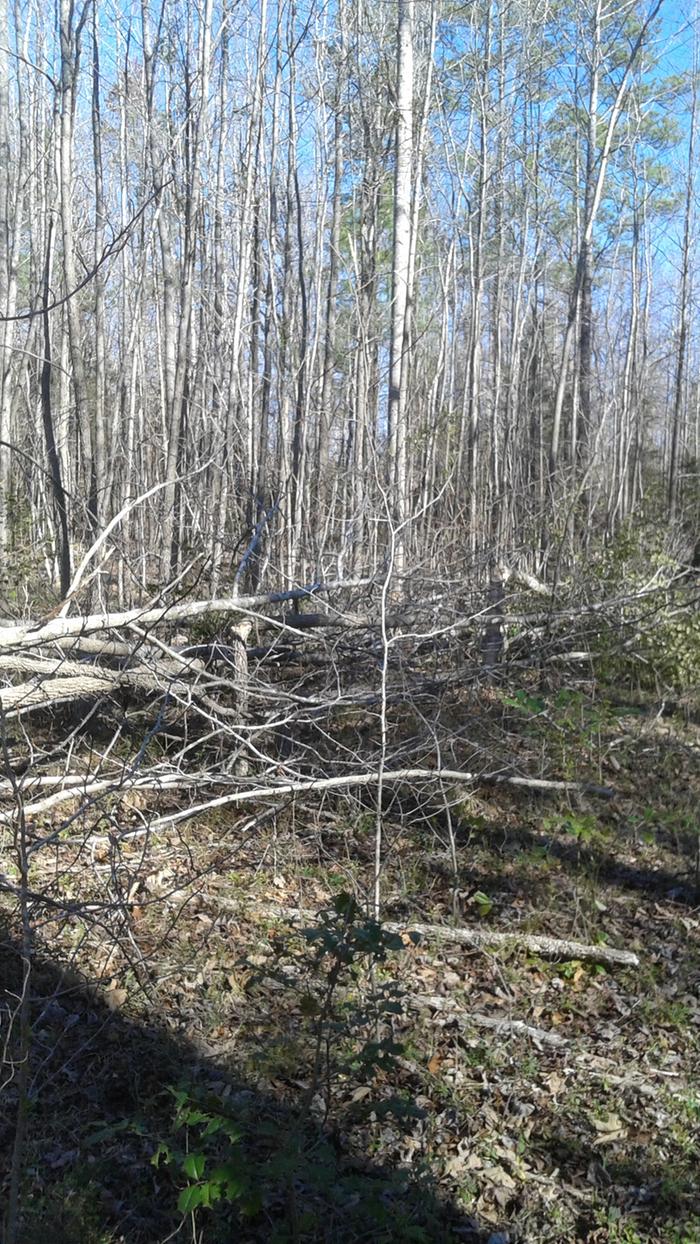 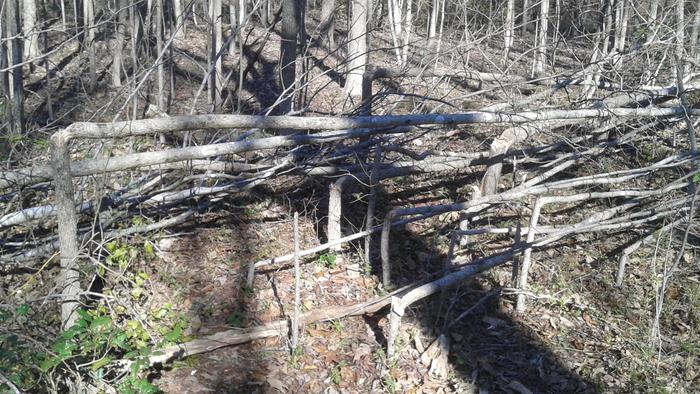 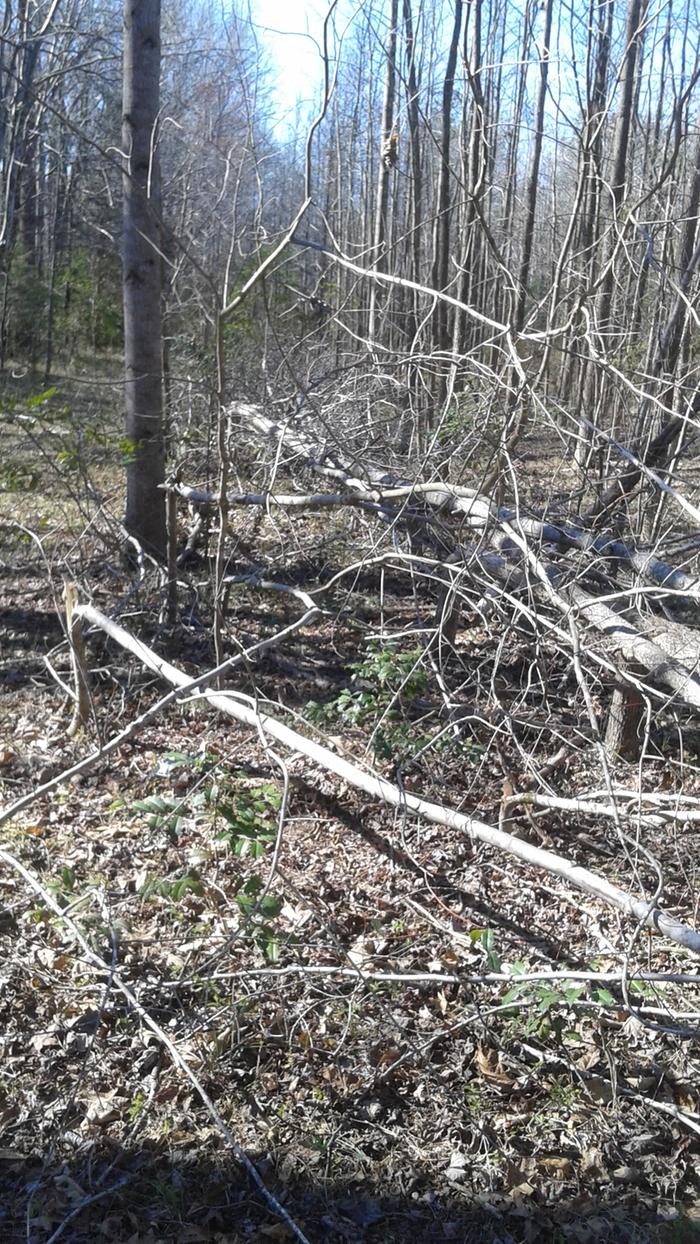 posted 3 years ago
You give me way too much credit TJ that is for sure...my dumb sheep outsmart me nearly every day if that is any indication of my skills and intelligence.

I am wondering though if you would have to make such a severe back cut if you secured the living trees to each other instead of cutting them so much that they are at right angles. By that I mean grabbing the tops and bringing the top down to secure it to an adjacent tree with rope. In that way you end up with a ton of "hoops", that granted would be higher then your current fence, but without so much of a back cut, or one at all. That might not leave you with enough density to stop animals, but what if you used the cleared saplings as "rails" between the looped living saplings as blockers?

Now this I have done, and with moderate success. I used fence posts 8 feet on center with saplings nailed between the posts to stop sheep from getting it. Mine worked as long as the sheep had plenty of grass to graze on, but when it got low they started to get out. In that way it failed because I only used 3 rails and sheep like to go under a fence and not over it. I probably should have used 4 or 5 rails instead, an extra one closer to the ground. And I would not use nails. I would secure the rails to the hooped living trees with wire. Just draw out twice the length of wire you need to go around the living tree and rail, double up the wire, thread it through itself, then using pliers twist the wire tight. Kind of like how rebar workers tie rebar together. It will hold the rail in place securely, is a cheap connection, and will not kill the living hooped trees because it does not circle the entire tree.

Now this may only be specific to your place as I am going by the photos. In the dead of winter it is hard to tell the species you are using but it looks like popil. I am not sure how easily they can be "trained". I know Ash and Beech if they are bent over for any length of time, are permanently shaped that way, but I think popil tends to like growing straight. But in this case, you must use what you got, so it is worth trying. And of course it might be a different species of wood that you predominantly have.
Travis Johnson
pollinator
Posts: 4958
1140
I like...

posted 3 years ago
Just for fun I tried constructing the idea above. Its a bit tough here as we still have snow on the ground and frozen soil, but I cobbled my idea together and took pictures. My biggest fear was having to look for an ideal spot, but thankfully it was not hard to find an area and make it work. I think for many homesteaders who buy a cut-over piece of land, this resource is readily available. (Note: this is a patch of forest I am clearing into a new field so don't be alarmed by the lack of trees and stumps). As for tools, I used a chainsaw and a pair of pliers to cut and twist the wire. For materials I used saplings and a roll of mechanics wire.

It definitely worked. Mine has a slight curve in it because I could not bend my saplings over and secure them to a stake in the ground (made of saplings too) so I could get a straight line. Again the ground was frozen and had snow. If a sapling does not grow where you need it too, it would be easy enough to just add one. Just use a lining bar to start a hole in the ground, then jam in a cut sapling, then bend it over and make another hole for the other end.

I only used 4 sapling "rails" too because this was just a concept idea. Adding a few more would make it far more impervious.

I did not really get into any rhythm, but building this 10-12 feet of fence took me 15 minutes. If a person got a a system down of bending, wire tying, and had pre-cut rails, they could zip along pretty quick.

Of course all this is just a temporary measure to get a fence up before a better living fence could start growing. Over time the small saplings rails would dry out, get brittle and break requiring replacement. The bent saplings should be fine though. 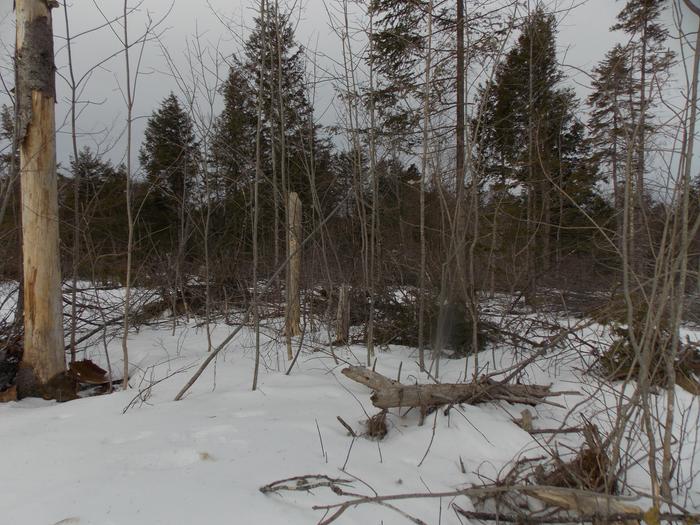 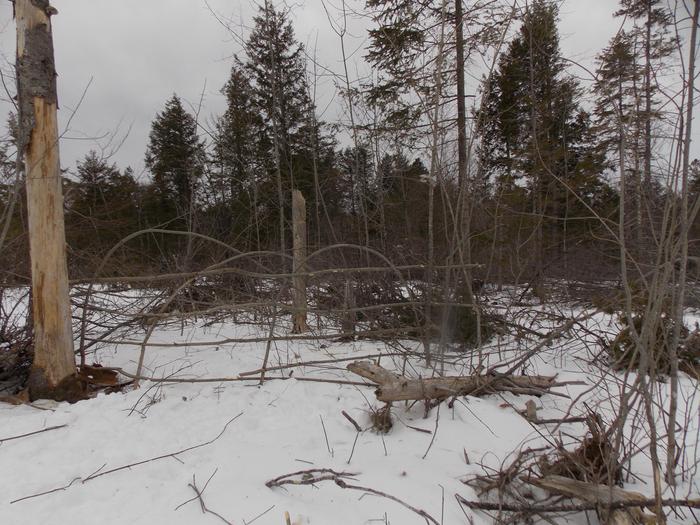 I am hoping the whole tree will survive (these are 90% sweetgum and a few tulip polar and water maple), thus giving me living crossbars as well. We are not quite as wet as you are but my suspicion is that a dead sapling low bar will decay about within 1-2 years and then I will be left with uprights that are alive but I will have to replace the crossbars, especially the important lower ones. And the VINES here, my gracious, are likely to make replacement impossible. I was thinking about just making a thicket fence, providing supports for the thorny wild roses which are already present and clearing out the overstory a little to make them grow like crazy. That is kind of my plan B, if the lain over trees die, the vines will probably do the trick. I have some areas of impenetrable vines and the deer do not challenge them, and the autumn olives seem to find their way in there for nitrogen fixation. I think based on naturally lain sweetgums (taken down by falling pines) they often stay alive with severe damage and send up verticals to make new trunks. Those I can lay over as well once the tree recovers. The fact that the sweetgums are suckers from rhizomes may make the colony cut it's losses and stop resourcing that trunk, or it may provide nutrition for the repair. I have to wait and see. The good news is that I need only wait 2-3 years for more sweetgums of the same size all over the place! I have become an artist at using them at this point. I have a corduroy road going hundreds of yards and fill it in anywhere I am felling. Unfortunately they are structurally useless (worse than poplar) so milling is a waste. It's why chipping is so tempting, they are by far the best biomass producer here. I am planning a WO-BAA-TI (working name) for the sheep, but termites here are aggressive and I will have to use borates and massive timbers even for a small structure. Span strength is about 1" diameter per foot of span.

What I am sort of aiming for is an area that is foxproof, which is a higher standard by far. I am working to hedge off the main forest garden area (about an acre) with only one tight access point and then have guineas in there. I know they will tend to go all over but if I raise the keets in there they should consider it their home (I hope) and maybe I can keep some of them around. The ticks here are preposterous, it was not unusual to get 30-40 on me on a brief walk in the woods, and we have lyme and babesiosis (about 20% of ticks) and some new one they haven't named yet but seems to be real. I'm using permethrin impregnated clothing and have had zero ticks using that but I would like to not be relying on it. Doesn't seem permi-approved but is much more reliable than pyrethrins (which I had to apply each time and was irritating). I think with the native roses I can get a really tight and nasty hedge. After a few years they seem to be structurally strong enough to support themselves even if the whole wood fence degrades.