Steven George
Posts: 32
Location: Finland, Minnesota Zone 4a
3
I like...

posted 3 years ago
So I am currently trying to lay out a plan for two different passive solar houses on my land.  I've narrowed down the likely sights for the buildings, and the best sighting for building #1 is about 165 degrees SE and only about 60 feet away from building #2.....  Building #1 will be approximately 25 feet tall.  We are located at 47.5 degrees latitude N.  I'm worried that building #1 might significantly block winter morning passive solar to building #2.  I'm wondering if anyone has encountered this issue and if anyone is aware of any formulas for figuring ideal distances between buildings etc for maximum passive solar?  I imagine that is must be possible to put your lattitude, distance, height, angle into some formula somehow, but I'm just not quite good enough at math to figure that out.

Also, any other ideas for making this easier would be much appreciated.  I need to get started on the footings for building #1 asap.

Posts: 3458
Location: Upstate NY, zone 5
209
2
posted 3 years ago
How wide are the buildings going to be east to west? Is there any slope to the land, or will the buildings sit exactly level with each other? This last is critical to figuring spacing/shading.

I don't know offhand of a calculator site, but your buildings are close enough to a N-S alignment that I believe you could draw a simple sketch and get your answer. You have 60' horizontal, 25' vertical, an angle of 47.5 + 23.4 = 79.9 degrees off vertical for the sunlight path from the peak of the southern building at the solstice. Draw these distances and angles to scale, and you will have an answer. A quick sketch shows that you would have about 14' of shading from ground level of the southern building on the northern building at the worst-case moment, shortly before noon on December 21st.


Is the southern building going to be flat-roofed, or have no more than a 10 degree slope up from the northern edge? If it will be peaked, where is the ridge? Centered on the east-west axis? In that case, the relevant distances are the ridge height and the distance from the center of the southern building to the face of the northern one.
Steven George
Posts: 32
Location: Finland, Minnesota Zone 4a
3
I like...

posted 3 years ago
Building #1 (southern) is 20 feet wide, Building #2 (northern) 40ft wide.
Also forgot to mention both buildings will be slightly offset to the SW about 20 to 25 degrees (mostly due to topographical features and line of sight toward gardens).  Not sure the exact difference in elevation, but I would say it is 5 feet or less (building #1 is slightly lower).

I don't have a whole lot of room to work with for either building without completely changing the sites, but there is potential to move building #1 up to maybe 15 feet south and a few feet east and building #2 could possibly move up to 10 feet or so NW.  There's also possibilities of building #1 moving up to 20 foot East or North or NE.

I feel like I probably need to do several different sketches to go through all the possible scenarios, I'm just not really sure how calculate the sun angles and do the sketches.  Any examples or suggestions?
Thanks

Posts: 3458
Location: Upstate NY, zone 5
209
2
posted 3 years ago
23.4 degrees is the axial tilt of the Earth. In summer, you would subtract it from your latitude to get the noon sun angle from vertical, and in winter you would add it to your latitude.

If you could move the buildings to 80' N-S separation, you would have 10' of shading from ground level of the southern building, or 5' up the northern wall if the elevation difference is 5'. I think it would be worth your time to get out a level and a straight 2x4, put it on the upper building ground location, and sight down it and see exactly how much difference there is in elevation to the southern building site. What are the conditions surrounding these buildings? Would it be sensible to raise the floor level (and the ground immediately around it) of the northern building a couple-few feet?

I didn't see an answer about the roofline of the southern building. How will it be configured, and what will be the heights at the peak and the eaves?

If building #1 is only 20' wide, it will be a minor and passing obstruction to 40' wide building #2 at worst. Remember that for most of the winter, the sun will be higher in the sky, and you will have less or no shading problem.
Glenn Herbert
gardener

You would have zero shading at the solstice noon at 72' from the north edge of building #1 at its floor level, and at 58' from building #1 at 5' above its floor level. So check your elevations, and I think you will be good to go as you originally described.
Steven George
Posts: 32
Location: Finland, Minnesota Zone 4a
3
I like...

posted 3 years ago
Thanks Glenn for help with the calcs!
This is the basic frame (in progress) of Building #1 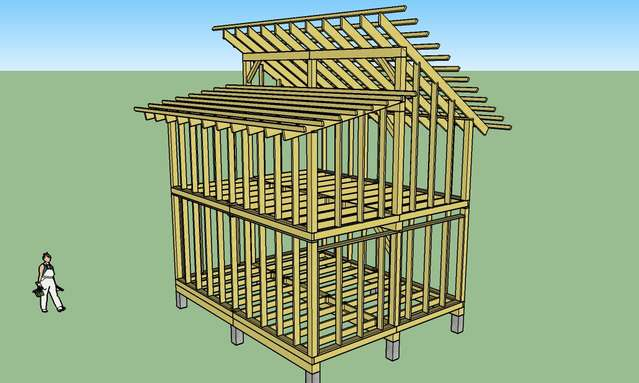 I'm actually going right now to go drive a stake and run a level string line to get the elevation difference, but just by sight I would guess 4 feet difference.

I also came across this site which seems helpful for the numbers
http://www.susdesign.com/sunposition/index.php

I'll be playing with all this probably for the rest of the day.  If anyone knows of any other good resources, please let me know.  When I come up with a plan and some coherent drawings, I will try to remember to post it here.
Thanks

Pictures and descriptions of what you are doing are always of interest to us.
Steven George
Posts: 32
Location: Finland, Minnesota Zone 4a
3
I like...

posted 3 years ago
Here's a couple crude drawings I came up with based on the angles given on the website I referenced above...... 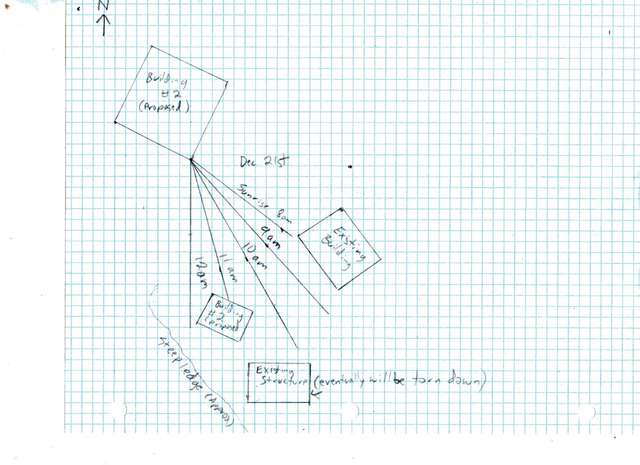 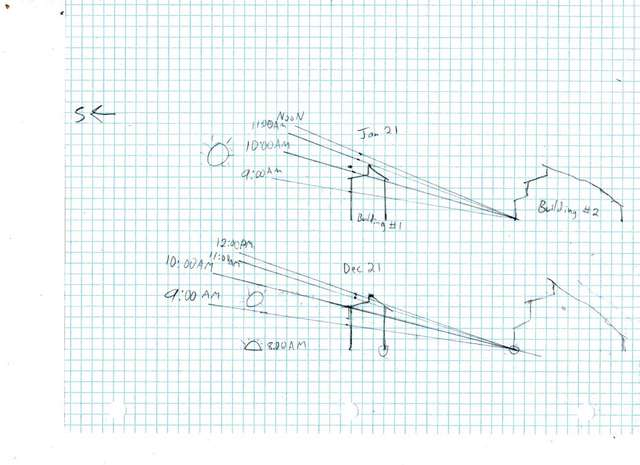 The difference in elevation turns out to be only about 2 feet.  Yes the peak of building #1 is roughly 25ft.

So with these drawings I am tending to lean towards placing building #1 a bit further south closer to the ledge (and closer to the structure to be torn down.  I'm gonna do some more reading on passive solar design though first.  From what I've read my impression is afternoon sun is more important for passive solar heating that morning sun?

Any thoughts are appreciated as always!

Posts: 3458
Location: Upstate NY, zone 5
209
2
posted 3 years ago
With the buildings angled so far to the south-southwest, you will get very little solar gain in the windows in the morning anyway. Thus, I wouldn't worry too much about maximizing shading clearances. Do what is comfortable for other aspects of the layout and live with it.

You might get the maximum heat gain for evening release with a SSW orientation, but remember that you will also get no significant heating in the morning after a cold night. My house is oriented about the same 23 degrees SSE, and gets great morning light and warmth for the middle of the day, with the heating power diminishing as the afternoon progresses (and the outside air is generally warmer than it was in the morning). The SSW orientation will get significant  sun inside during the fall, and afternoon sun may often overheat the space around suppertime and cooking time before that.

Any orientation off of due south will get less insolation in winter, and the total will be the same no matter which direction it is canted, unless your location gets different sunshine in the morning or afternoon. My site has a hill to the west, so there is no direct sun an hour or two before sunset, while sunrise hits the site as soon as the sun is over the horizon.