I've been around the forums for a while now, but I'm a complete Kickstarter newbie, at least in the sense of running the campaigns. It's quite a learning curve, but I'm happy to say I'm in the middle of my first Kickstarter, and I can't wait to share it with you.

All 370+ students at the school where I work pitched in to do some research about the importance of the pollinator garden we built on campus last spring. To make the research fun, we decided to use the interesting facts we were discovering on playing cards - and that meant we had to create our own deck. We created new suits and found facts to go along with each one. If the project is successfully funded, each student will receive their own deck of cards, and we'll use them for many math games in addition to reviewing the information about our pollinator garden.

Here's a sample card. It still needs some tweaking to adjust the size of the number and the suit picture, but it gives a very good idea of what the finished cards will look like. (The design for the back of the cards is still under construction.) 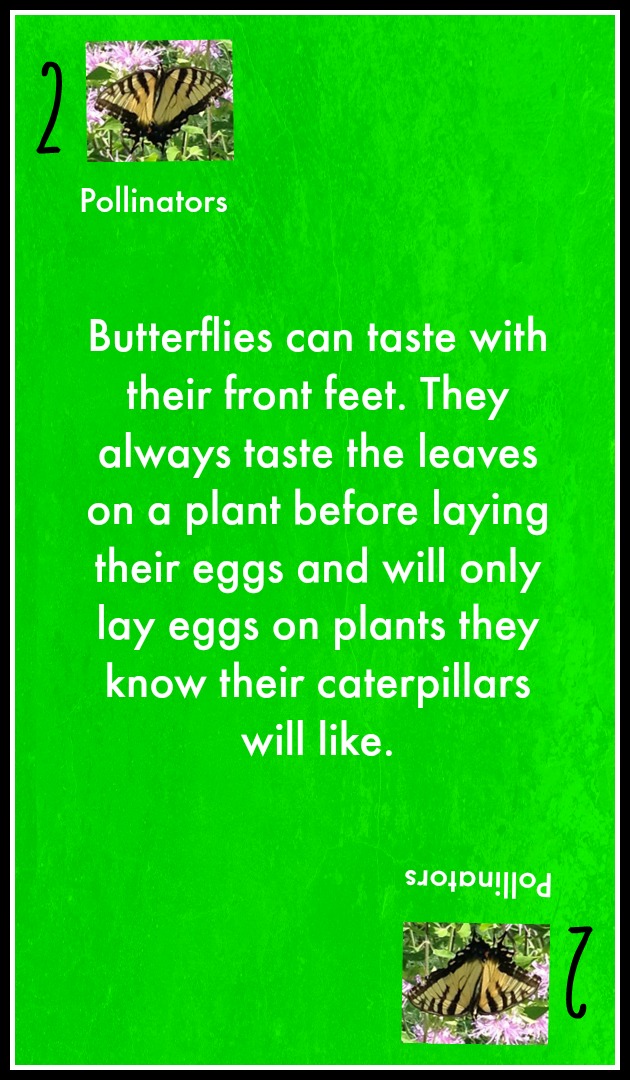 Last spring our school partnered with several agencies including our town, Cooperative Extension, the USDA, and a local group called River Friends to build a pollinator garden on our campus. Our goal with the garden was to be part of a larger initiative to expand a "green corridor" by providing resources for the local pollinators. We planted several native perennials along with some annual flowering plants. It was great because it was new.

But you know how things go. This year it wasn't new, and the kids didn't really seem to appreciate the importance of the garden or the interactions of the plants and animals out there. Lots of research says that kids, like all people, care about what they know about, so helping them learn more about the importance of the garden made a lot of sense. As the school librarian, I was in a unique position to work with every single student (grades K-4)  to do research (a skill we teach in the library) about the plants and animals in our garden.

No matter what age you are, research for the sake of research is not inherently fun. Research to find the answer to a question you have is, but just reading articles and writing things down is not. So, to make it more fun we decided to create a deck of cards. Each card would include one of the most interesting facts we found right in the middle. We also decided to create new suits, since the traditional suits of cards don't relate much to pollination.  Creating a project to go along with our research made it insanely cool! The kids have worked very hard, gained a new appreciation for the work that pollinators do, and have a better understanding of the ways humans  figure into the process for good and for bad.

You know every kid wants a deck of cards. You just know it! And we all know from Paul's past card project that printing is expensive! Schools don't have that kind of money for crazy projects the librarians think up, so I turned to Kickstarter hoping there were enough people in the world who would deem this project worthy enough to contribute. It's truly a project we'd like to share with the world so we can teach others all the interesting facts we've learned. That way more people - including more children - will understand more about the natural world and eventually work to support it. And isn't that one of the founding philosophies of the site - do good things that other people want to copy? Based on the amount of food pollinators help produce, we think helping pollinators is a great thing we want to encourage other people to do!

I don't want to overstate the progress we've made. We are still teaching the kids not to touch butterfly wings and not to automatically squish bees, but the kids are becoming more mindful of those things.

There are two main reasons we decided to produce playing cards.

First, as a classroom teacher for many years, I used decks of cards with my students to practice math facts. There are several games that kids can play either on their own or with a friend/partner to learn their addition or multiplication facts, and even a few games to practice concepts like place value and fractions. That's way more fun than doing a worksheet - for all of us! I'm going to write those games up into a booklet for supporters at the Green Thumb level and above. This booklet is perfect for teachers and parents (because parents are teachers).

Second, cards are a great canvas for messages. A few years ago a deck of cards with "52 reasons I love you" or a similar list was a popular gift. That suggests cards are perfect for short messages - or important facts. We chose to write important facts.

Third, because we had the freedom to create our own suits, we could organize the facts we found into logical groups and look at many sides of the pollination process. That gave the students much more to research and process, and that has been great. We went with the following suits:

Pollinators -  The facts in this suit will focus on many different pollinators including bees, butterflies, bats, moths, and other insects. There is likely to be an emphasis on bees and butterflies, but the others will be included.

Pollination -  The facts in this suit will explain what pollination is, how it happens, and why that's important. Since the cards are geared toward children, the terms will be simplified rather than scientific, but the facts will still explain the importance of the entire process.

Pollen - The facts in this suit will focus on pollen itself. In talking with my students, they were not very clear about what pollen is, where it comes from, what it looks like, or why it's important. The facts on these cards should address that.

People - The facts in this suit will focus on the connection between people and every other suit in the deck in order to make the entire process more personal and relevant to the children. There are many ways people can help and hinder the process of pollination through their actions toward the pollinators and/or the plants those critters pollinate. Learning ways to help the process and learning more about the benefits to themselves is an important lesson itself!


The Pollinator Garden Playing Cards will be a fun tool for learning more about the natural world - and about math. We are excited to share what we've learned and hope you will consider supporting us by spreading the word or backing the project. Here's a link. Thank you so much!

Paul has a podcast about making kickstarters work well, it should have "kickstarter" in the title--if you haven't listened to that, I would suggest it.  I cant' remember what he said now but he's a bit of a kickstarter genius.  Probably one of the things he's best at, among many things he's freakin awesome at.  And he's had several successful kickstarter campaigns.

If you've already done that, let us know and I bet you'll get more fine-tuned responses to your post.

Connected or reconnected. Fit with the right cycles and in the right season. Nourished and nurtured with natural energy. Aware of place and part.

posted 1 year ago
Thanks, Joshua. I have listened to one of the podcasts. That doesn't make me knowledgeable, though, so I should probably watch some others. I feel like I should add a video, but I'm not sure what it would say different than what's already been said. Definitely thinking about it. I guess I was naive enough to think it would be easy and straightforward, but I'm finding you need some pretty special skills to make this work.

Kim Arnold wrote:Thanks, Joshua. I have listened to one of the podcasts. That doesn't make me knowledgeable, though, so I should probably watch some others. I feel like I should add a video, but I'm not sure what it would say different than what's already been said. Definitely thinking about it. I guess I was naive enough to think it would be easy and straightforward, but I'm finding you need some pretty special skills to make this work.

Great--you mean the podcast about kickstarters?

I think you can do OK with just easy and straightforward...what you have is pretty compelling (kids--that gets everyone to contribute!) but if you want to fine-tune it a bit you can make it more successful and then be able to make a bigger difference in the world.  Maybe your kids will want to help with designing the kickstarter--the younger people are they better they seem to understand technology!

Connected or reconnected. Fit with the right cycles and in the right season. Nourished and nurtured with natural energy. Aware of place and part.

posted 1 year ago
Yes, the Kickstarter podcast. Now I've heard two of them. Working toward #3.

I think you can do OK with just easy and straightforward...what you have is pretty compelling (kids--that gets everyone to contribute!)

That's encouraging - thanks! I wish it were proving to be true that everyone wants to contribute. There's still time, though.