posted 1 year ago
It's probably been done, so if there's a link someone could point to, I'd like to see it.

I was walking my dogs this morning, and I just was thinking of this setup for some reason.  I don't recall having seen someone try it.

The idea is that the valve could hopefully just be permanently left open during the growing season.....or if it's for a tree, etc.  If the plants above/near the underground pipe were getting too much water, the valve could be turned off.

I would think it would have to be clay soil for the way I envision it to work in my head.  The clay I have here is incredibly dense, and the idea would be to bury the pvc pipe having made seeping holes wherever needed.  Not sure about the hole size.  The idea is for the clay to clog the hole immediately, so that just a tiny amount of water is able to leach its way through.  Over time nearby roots would find the water source and bury themselves into the pipe, plugging the holes in doing so?  Even when the roots break the pipe apart, enough would still be in tact that the system would still work???   End result is hopefully a never ending supply of water to the roots.  Hopefully minimal lost water to evaporation/areas that don't need to be watered as much.

I don't need this for anything.  It seems like an overly elaborate watering system (maybe more efficient), trying to replace a simpler system(maybe more inefficient), lol, but whatever....
It's just for fun to think about. 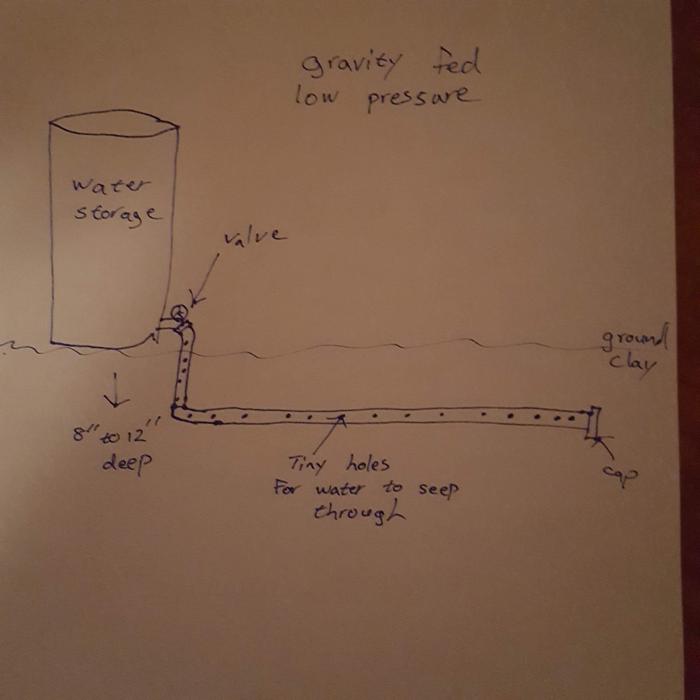 posted 1 year ago
A slow leach-line like that is usually surrounded with some sort of aggregate to increase the capacity for water to flow out and extend the range of the water infiltration before roots eventually find their way to the pipe.  Thus, as water flows out of the holes in the pipe and trickles down through the layer or rocks or sand, it pools below -- not at the pipe.  Thus, plant roots seeking water will tend to mass below the pipe, not directly toward the small water holes in the pipe.

So a simple way to extend the life of the system you've drawn would be to bury it on top of a bed of 6 or 8 inches of sand and biochar.  I wouldn't bury it in a bed of rocks like you would with a septic field leach line, as those would be difficult to dig out if you ever removed the line.  But sand and biochar would be easy enough to till back into the soil profile some day, only making your heavy clay soil better.  The more biochar, the better.

Depending on how temporary you want this system to be (3 years?), you might even use wood chips in your trench around the drip line.  They would quickly break down in such a moist environment, but they would work for a couple of years.

posted 1 year ago
Thank you Marco.
Yes, I have seen where they put the rock around to prevent the holes from plugging, and to increase the area the water spreads.
I was thinking with a system like that there would have to be a significant amount more water on reserve since the idea seems to be to completely saturate the soil for the roots to absorb water vs a pin point straw for them to drink from.  Super efficient is what I was thinking........
then after I read what you wrote I realized the roots would probably need to be in moist soil just for their general health.......which would probably mean even if they had a never ending supply of water, if the soil around them is bone dry.....it's probably not going to work.
then of course I forgot about how important life in the soil is, and that's what feeds the plants..and how that life needs moisture.....so even if the plant were able to survive the bone dry dirt and drink the never ending supply of water.....that water would probably need to be fertilized.......and I'm not into aquaponics lol.

Thank you for the correct information.  Scratch that above idea!

posted 1 year ago
Why not bury a thick rope instead of a pipe? Something like a wick. I came across this concept in "Gardening with less water" by David Bainbridge, but I don't have experince on the subject. Seems very promissing though. I will add a picture of the related drawings. Simple and a very useful book I should add.
DSC_0778.JPG 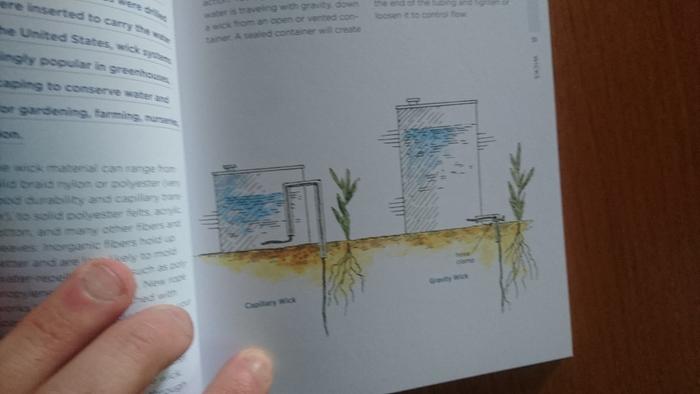 posted 1 year ago
Wow!  That's a great illustration, and that looks to keep everything really simple.  Really cool that a wick can be run through pipe like that too.  I love seeing stuff like that.