posted 3 years ago
I was once part of the Yard Patrol, the thin blue line between croquet and disaster. No more. This is the story of Crabgrass. I am not a botanist, I would consider myself a plant nerd. /intro

To start, there are three primary metabolic processes in grasses, and in plants in general. These are known as C3, C4 and CAM metabolism. Bryant, you can quit reading here, I think you wrote the citations.

This defines a step in the photorespiration cycle, and allows the plant to utilize CO2 and convert it to sugars. Without one of these pathways there is no plant life. A good primer can be found here.

Basically C3 is anything that grows above freezing but below about 85 degrees F air temperature. C4 plants generally are more enzymatically active at temperatures above the low 70s.  There are some exceptions, but these are pretty good rules. I am not going into CAM, primarily because I have forgotten everything I knew about it. It's mostly desert plants. C3 grasses are the ones that are actively growing in the spring, but some perennial C4 grasses can have some growth.

Crabgrasses (digitaria) are all C4 grasses as far as I know. They pretty much don't show up until the air temps are in the 70s and they are done when it starts to cool down. They actually seem to have a "wind-down" setting that is triggered by cooler temperatures and shorter days that causes maximal seed setting and preparing the soil for the next year. Every grass has a plot to kill it's neighbor, and it is cutthroat!

There are three species I have had significant contact with- d. sanguinalis the "hairy crabgrass", d. ischemium the "smooth crabgrass", and d. ciliaris the "southern crabgrass". These are the most common in North America but I have seen them in other continents or species very similar. Like any plant in the wild, they grow where conditions suit them, always keep that in mind. All crabgrasses have a "knuckle" growth habit, which is why they are named fingers in Latin.

Digitaria sanguinalis, the hairy crabgrass, can be identified by the initial rooting, which tends to be a handful of long tendrils that are less roots than anchors. They knuckle very soon after emergence, and this allows them to spread laterally very rapidly. The knuckles themselves will form rootlets quite soon after they have established rapid growth. They form a very tough mat after a few weeks if undisturbed on soft soil. The leaves also are hairier than the smooth (although both have some hairs), and they are are used to collect dew and allow growth even without rain. In fact it seems to grow most rapidly when conditions are dry in my humid location, because it steals the dew from the surrounding grasses and plants. As I have long suspected, hairy crabgrass makes allelopathic compounds that inhibit other plants' growth. What a jerk thing to do! So in the heat of the summer you can almost watch it kill the cool season grasses. The combination of preferential dew absorption and toxic plant gick are potent. Places that have been colonized by hairy crabgrass seem to need mycotic activity to break down the various allelopathic compounds before much else will grow.

On the upside, you can eat the seeds per Green Deane. I have tried them and they taste like grass (oddly), but apparently this was considered a possible grain crop by early European settlers. The genus is grown as a crop in parts of Africa. It is actually a perfectly good forage, but has a very short season.

Digitaria ischaemium is the smooth crabgrass. It looks much like cool season grasses when initially emerged, but is just flat out better at living during summer than the cool-season grasses and tends to overgrow them. I have not seen the allelopathic traits in this grass. Animals will eat it but they don't seem to prefer it. I suspect it has little mineral content due to the rapid growth, which tends to make leaves that only grasshoppers like.  It has a more standard root structure, and unlike the hairy crabgrass, it seems to have more plant matter in the soil and improves the location somewhat.

Digitaria ciliaris seems like somewhere in the middle in appearance. I don't remember it having the same allelopathic effect, but that could be that there was fungal activity most of the year in the south. It is honestly a little hard to tell from the ischaemium. It tends to have a more prostrate growth habit and more aggressive rooting at the nodes.

So this stuff grows like crazy, no? What good is it? I used to hate it. What I have discovered is that this climate, the soil is prone to drying out during the summer if we get a dry month, and the further south you go, the more likely you have a real dry season. This keeps some solar cover on the soil, and retains some microbial life. It produces absolutely abundant biomass, d. ischaemium>d. ciliaris> d. sanguinalis in my climate. It also harvests dew like an air well, allowing the soil to stay humid. So in areas that I was trying to repair, I just quit mowing it at all for a summer. The biomass was intense, and the ischaemium overgrew the sanguinalis. This allowed me to literally just broadcast seed and mow in the fall, like a giant chop and drop, and the new seed did well, especially chicory, but also some bluegrass and perennial rye and orchardgrass is in areas that were quite barren for years! This year it is back, but very minimal, since I am not mowing during the summer. So I recommend it as a way of initiating a field. The danger is that if a field is overgrazed, the seeds are viable for over ten years, and they will smother the progress that was made, and there are many millions of seeds in the field after last summer. On the tiny lawn, I let the ischaemium grow, but I do pull the hairy crabgrass sometimes. It is very easy to find in the early morning, they will have dew on the hairs. The areas that the seedling grass dies probably didn't have the soil depth to support them this year anyhow, and I will reseed and try again this fall. It is a lot lower stress than the Lawn Patrol.

Usual caveats apply, this worked well in this climate. The primary issues preventing improved forage grasses in my field were (are) compaction, sun reaching the soil during the hot part of summer, and mineral depletion from lack of vegetation. The smooth crabgrass has been helpful in terms of the middle factor, and now I am seeing species that will assist in the others. If your primary issue is something else,  it may be terrible for you!

Joylynn Hardesty
master pollinator
Posts: 3554
Location: Officially Zone 7b, according to personal obsevations I live in 7a, SW Tennessee
1372
3
I like...

posted 3 years ago
This is great info, thank you. I have a large area of my garden that has been invaded by Yellow Chufa, or nutsedge. I've been considering using one of these grasses as a summer cover crop, to crowd out and hopefully kill my enemy, Chufa. The stuff is allelopathic. Not helpful to my desired plants.

"Yellow nutsedge is especially troublesome in agriculture because it is adapted to many crops and tillage systems. Some herbicides commonly used in corn and soybeans are not very effective on yellow nutsedge and serve only to eliminate other competing weeds, thus allowing yellow nutsedge to survive and spread. This species is also troublesome because it competes with crops for water, nutrients and light, and suppresses crop growth by producing toxic compounds in the soil (allelopathy). With high populations of yellow nutsedge, allelopathy can suppress the growth of young corn, soybean, and other crop plants. A density of about 10 yellow nutsedge plants per square foot reduces corn yields about 8%. Each plant can produce hundreds to thousands of tubers per season, and in densely infested fields, this adds up to 10 to 32 million tubers per acre. Rhizomes can penetrate potato tubers. Control of yellow nutsedge may be aided by improved drainage, crop rotation, several years of fallow, or shallow cultivation throughout the growing season (while tubers are sprouting) to prevent the formation of new tubers."
From this site:http://www.oardc.ohio-state.edu/weedguide/single_weed.php?id=84

TJ wrote:
"Digitaria ischaemium is the smooth crabgrass. It looks much like cool season grasses when initially emerged, but is just flat out better at living during summer than the cool-season grasses and tends to overgrow them. I have not seen the allelopathic traits in this grass. Animals will eat it but they don't seem to prefer it. I suspect it has little mineral content due to the rapid growth, which tends to make leaves that only grasshoppers like.  It has a more standard root structure, and unlike the hairy crabgrass, it seems to have more plant matter in the soil and improves the location somewhat."

I've already got this type of grass in my seed bank, so I'm thinking this would be the choice to purchase. Do you imagine this plan to be folly?
feild-of-chufa.jpg 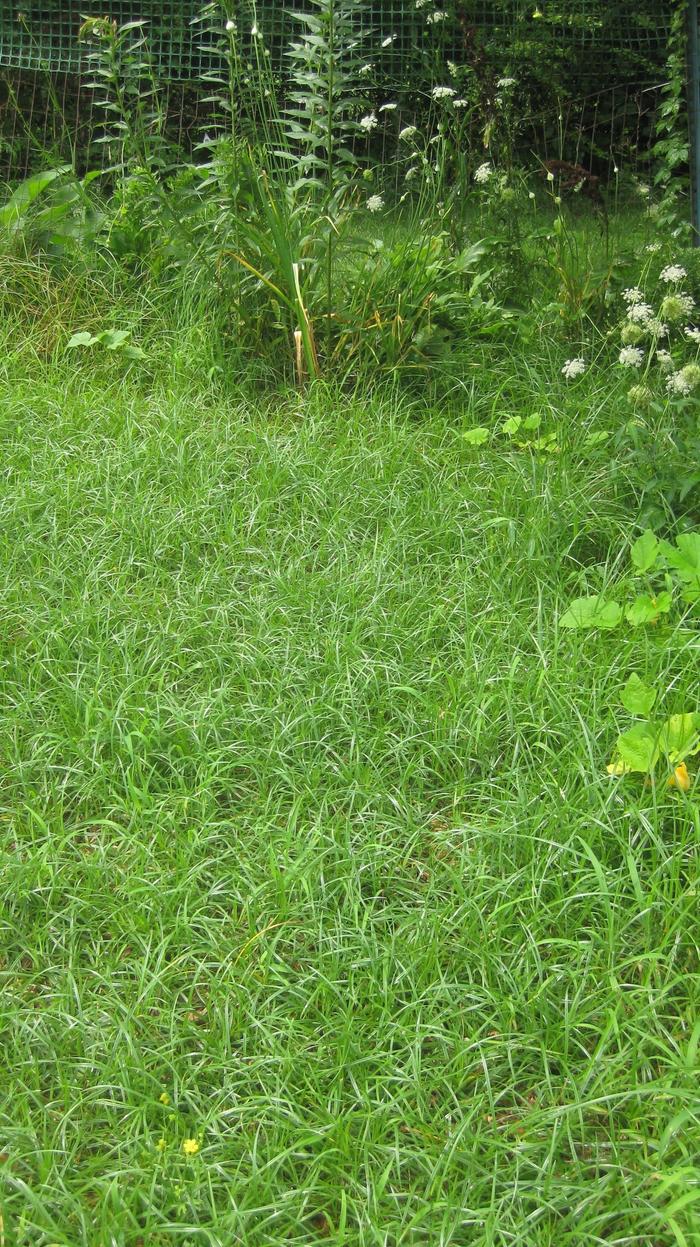 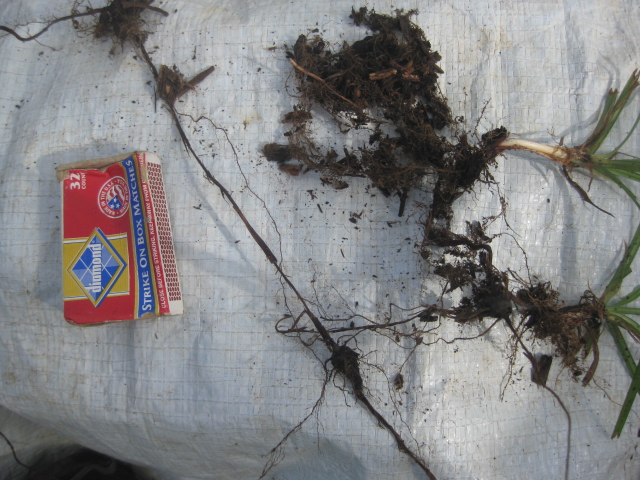 posted 3 years ago
Chufa (sedges in general) are a whole nuther thing. Easiest thing to do with sedges IMO are to have turkeys. Check this out, people plant it intentionally! They even have instructions for how much fertilizer and glyphosate to use to get it really kicking. Hilarious!

Pigs also will root for the "nuts", but the remaining ones can regenerate fantastically fast. The best control for sedges are to have deep-rooted grass. I have ZERO sedge in the well maintained areas, but tons in the fields that were trashed when we moved in. It cannot compete in the cold, since it is a C4 plant as well, so any C4 competition will be desirable, since that will displace the sedge. All that said, you will have it for years even with a good program to decrease it. I don't see it around bermuda grass, but that is its own problem. It is around in the field, and I don't stress about it. Over time with diverse species and deeper rooted grasses it will be an occasional plant.


I'm thinking this would be the choice to purchase.


Gracious, it should be seeding out already in your climate, just spread it from existing plants and can have a couple generations a summer. There should be some around there anyhow. Smooth crabgrass also likes a little organic matter and is another option if yu have some chips, I throw them in the grass and it provides potassium and rots quickly. I have smooth but never hairy around wood chip piles. So if you are mowing pull up some smooth crabgrass that is seeding out and mulch mow it where you think you might want it. It will grow fine. The most I see is where the dog pees, killing the perennial grasses, grows like crazy there.