James Stark
Posts: 79
Location: Manitoba Canada
posted 10 years ago
So last year I had LOTS of potatoes. My favorite are red potatoes, so about half my patch was dedicated to them. As you guys probably know, the reds don't keep as long as, say, russets, so this spring I had a bunch of them that had wrinkled/softened to the point where they were no good anymore. I hate wasted food, but I figured at least I'd get a good chunk of compost from them. I use my compost on my potato plants, so decided to compost the wasted taters seperately to avoid any possible diseases. I tossed them in a pile with a bunch of old weeds, spent chicken bedding, and other yard waste, and left it to slow compost for next year. A bunch of the old potatoes (they already all had sprouted indoors) came poking through the old straw and such, so I decided to bury them with some extra soil and see what came of it. This was all in early spring, at least three weeks before last frost. (In fact, we had some pretty heavy snow after they were put out)

Fast forward to today. I've been piling soil, straw, compost, and whatever else on the pile, and now it's three feet high, about five feet across, and a sea of green potato plants. I add soil at least weekly, and theres not a weed in sight, just a potato hill! They are the healthiest plants I've seen, and by far the easiest to grow. Even if the potato harvest is poor, the pile left over will be beautiful, rich soil. But by the looks of things, the harvest from this "garbage pile" will be fantastic! These are by far the easiest and healthiest potatoes I've ever grown, and digging them will be easy too.

Posts: 6
Location: Sequim. WA
posted 10 years ago
You are outstanding in your field!

We are hilling taters in the patch.  I would like to use goat bedding to mound up around the plants to keep about 6 inches of leaf showing, then let the rest of the leaves go to tubers.

The bedding has some loose hay/straw on top, the lower layers are tightly packed, with lots of moist areas.  Would the moist stuff burn the plants?

I'm not sure about the best way to lay the bedding around the plants.  Since it comes out in sheets or chunks, maybe it would be better to grind or shred it?  Decisions, decisions....

Gardener, what's that fly doing in my compost tea?

James Stark
Posts: 79
Location: Manitoba Canada
posted 10 years ago
I'd break it up as best you can (just don't work too hard at it

This compost pile turned potato experiment has been all about laziness. I toss on whatever is handy at the time, and I bury the plants completely. Then I just kind of run my fingers through the fresh soil/compost/whatever that I just added to make a few leaves show through the surface. (And I really mean just a FEW leaves. The plants are pretty much buried every week) Within a day or two they have popped up out of the soil, and by the end of the week they are another six inches above ground and ready to be buried again.

Posts: 7926
Location: Currently in Lake Stevens, WA. Home in Spokane
324
posted 10 years ago
That is just proof that we all need more than one compost pile.  It is Murphy's Law in action: the plants we nurture may produce OK, but the volunteers and throw-aways will prosper!
I agree about the red potatoes...best for boiling.  When Mom made potato salad, she would use the red ones...yumm!

Thea Olsen
pollinator
Posts: 113
Location: suburbs of Chicago USDA zone 5b
2
posted 10 years ago
I'm tempted to try this, since I still haven't planted all my seed potatoes yet, and a farmer friend told me she usually isn't done planting them until mid-July.  The only trouble is, one of the weeds I'm pulling a lot of right now is bindweed, which I've learned from experience will send its roots right through garlic bulbs, so I suspect it would do the same with potatoes.  OTOH, I've also observed that bindweed doesn't spread from the compost heap, and if I don't plant these potatoes soon they're going to rot, so I guess I have nothing to lose.

I say go for it. pick a spot (mine was on the west side of my house, so it doesn't even get sun all day) rip up as much of the bindweed as you can, then mulch it with paper for a week. toss your taters and a bunch of other stuff on top of the spot, and dump some soil on top. Then forget it's there. Either your taters will compost, or you'll find them growing. Either way it's a good thing. And if they grow, you'll prob be like me and throw a wheelbarrow or two of compost or soil on top every week. I haven't seen a weed yet, since they never get a chance to grow.

My pile started with the taters and a lot of straw. Some was spent chicken bedding (good nutes in there) and some was a pile of dried up wild oats I had piled up from last year (along with other stuff like weeds and crap that you usually want to compost for over a year). I didn't even start with soil, since I hadn't really planned on the potatoes growng. I will admit though, I did think to myself how neat it would be if they grew as I was dumping them in the pile and seeing all the sprouts!

Posts: 6
Location: Sequim. WA
posted 10 years ago
One section of the patch is hilled up with dry bedding..loose stuff on the top of the trampled down section. Figured this would be better than some of the packed/stamped down/compacted stuff.

Going to build up around the patch with chunks of the compacted bedding, and see if that will hold the dry stuff in place.

It looks like the chickens would pick this apart  so quickly it wouldn't make sense  to let them in there.
0706011419.jpg 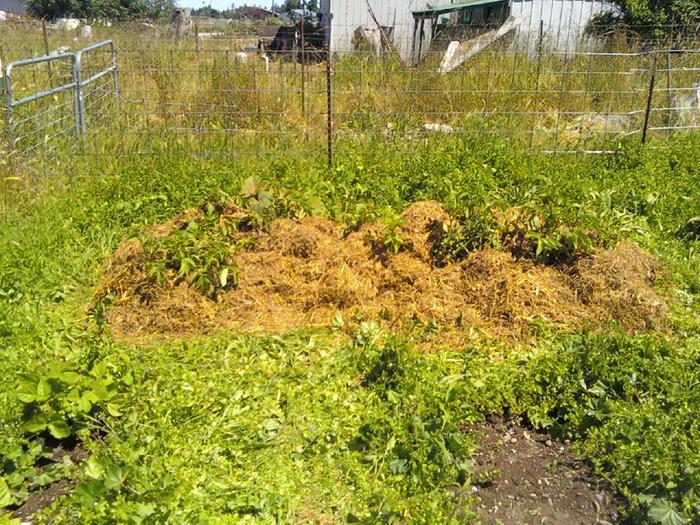 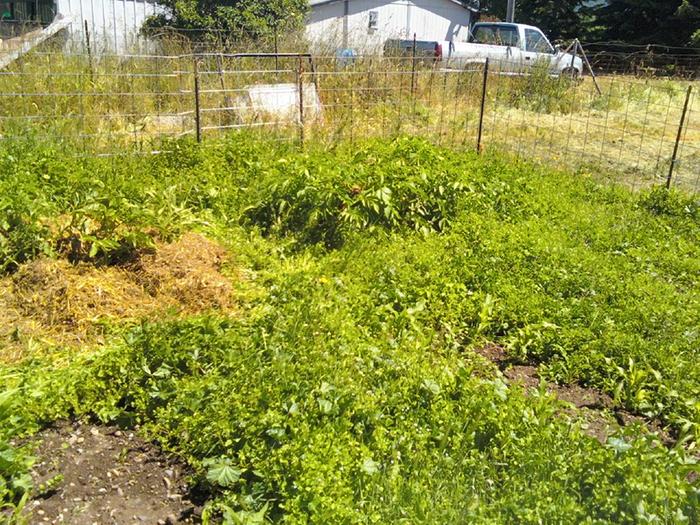 Gardener, what's that fly doing in my compost tea?

Posts: 3999
Location: Wellington, New Zealand. Temperate, coastal, sandy, windy,
103
posted 10 years ago
James, if your hill's productive, will you just rotate it round the place using the same spuds?
I'm worried about disease, but not enough to pull my healthy-looking potato volunteers!
I plan to harvest them ALL without exception and buy guaranteed virus-free stock next season.
Usually I ignore that kind of stuff, but it seems viruses could really do a number on my solanums.
Have you actually had disease in the past? I read/hear a lot about the dangers, but not personal experience.
Posts: 46
posted 10 years ago
ive done this with potatoes and jarusalem artichokes with great success... the plants come out of the ground faster than others in the spring because of the heat from the compost pile... there is also ample nutrients.. ive been worried about possible pathogens in the uncomposted materials or the new materials (as i'm adding fresh organic matter still all the time )
well see.
James Stark
Posts: 79
Location: Manitoba Canada
posted 10 years ago
I save my own seed potatoes, and replenish them every four years or so (longer if they are still doing very well). These are still only one generation away from new seed potatoes, and all the matereal I add is either soil or fully composted now that they are doing so well. I only started with a mishmash of stuff. I agree that it was probably the heat of the fresh compost pile that got them going so well, and now I am keeping the fresh stuff out to keep the tater hill somewhat on the cooler side.
I'll likely save my own seed potatoes from this pile if they do well, but I never plant potatoes in the same spot twice. I'll do this again if it works out, but yes, definitely in a different spot.