Cal Burns
Posts: 125
posted 9 years ago
In the past seven years we've had flooding problems twice where our backyard was a lake from runoff from other properties. It is a gradual 8 percent grade that directs towards our house. This usually happens only after it has rained for days and the ground is saturated. Course, here in central Texas with our drought that has been a long time since we had lots of rain.
Want to put in a trench/drain to encourage water away from the house. Would a swale work as well? Have an empty lot next to us that I'll be putting in a swale/hugel bed to catch water for fruit trees. Rainwater also goes behind the shop where it's done some wood damage. Plan to put gutters and rain barrels on back of shop and back of house to correct some of that. It's a pier/beam house, which the original owners built too close to the ground (yeah, I know the paint job is crappy, I'm looking to correct that

. Would like to put on hardy plank, but that's another thing (and I'm cheap).
For the far left back corner of the house I've replaced some wood and built a 8" concrete wall which has helped some (although it's cracking and ugly). Need better ideas for this that would look nicer but not be costly. Have thought about using big rocks which would be kind of a back border for a raised bed along the back of the house. Interested in planting some type of edibles along the back side of the house. The concern I have though is, well plants need water and not wanting to have too much saturate around the house. Planning to do hugel beds and also use ollas and drip irrigation.
houseback.jpg 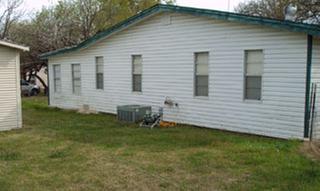 Brenda Groth
pollinator
Posts: 4437
Location: North Central Michigan
26
posted 9 years ago
is there an area of LOWER grade than your house?

what our son did was 3 things, first he put a sump pump into his basement..

the ditch goes from his house to the swamp, there are also trenches filled with gravel with french drain across grade every 20 to 30 feet across the slope of his back yard to the ditch and we also built a pond at the bottom of a hill that takes as much rainwater as well as ground water and makes a lovely pond for critters and fish and flowers..

all trench filled ditches are covered with sod and mowed..

Cal Burns
Posts: 125
posted 9 years ago
is there an area of LOWER grade than your house?
The land slopes gradually to the front and street where there's a ditch. Slope is not much though, 4-8 percent at most if that much. Don't have a basement. Have thought about a French drain, was leaning more towards a berm. On right side of house was looking to have a berm directed away from the house with some swales and plant some fruit trees maybe. With our drought, the flooding is the last thing you think about till it happens to rain for several days (a rare thing these days).