posted 2 years ago
First, allow me to share a few important passages from this article, Slow-Moving Storms Like Florence Produce Big Floods -- And Are Becoming The Norm.

Florence’s slow forward movement and dangerous torrent of heavy rain aren’t unique to hurricanes. These features are also present in big storms that strike around the country. And what’s more, extreme rainfall events are hitting more often, and big, slow-moving systems are becoming more common. As the climate changes, it’s not just that we can expect to see more hurricanes like Florence, it’s also that more storms of other types will look like this, too.
...
Florence was traveling at about a fraction of the average speed for its latitude when it made landfall and has made it obvious how a slow, wet storm can turn a hurricane from a coastal wind disaster to a far-reaching flood risk. And one of the calling cards of climate change is the wet storms it produces. Scientists are still studying how the shifting environment is changing weather systems, but they’re more certain than usual that it’s causing an increase in extreme precipitation events.
...
The forward speed of storms is not as well-studied, experts said, but there’s some evidence that the same changing climate that’s leading to more extreme rainfall is also putting the brakes on big rainstorms, which means they dump more water in one place.
...
The result is a shifting norm in flood risk across the country. If you live on the coast, you can probably expect more flooding caused by hurricanes like Florence. If you live in the Midwest, you can probably expect more thunderstorm-related flooding. And in both cases, the kind of big floods that were rare in the past are becoming more common now.


And here's a chart showing increased precipitation in the US: 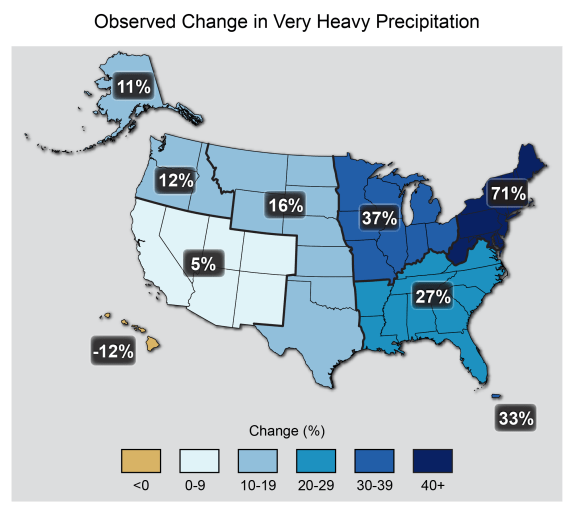 Now as scary as this is, watch this video from Geoff Lawton showing how permaculture practices can at least minimize the dramatic effects of this type of rainfall.

One of our area's largest flood events was due to a storm grinding itself to a near-halt over the Greater Toronto Area a half-dozen or so years ago. The ones we've had since have been more frequent, and showing the same pattern, for the most part, but otherwise relatively minor.

I don't expect them to remain so, and the infrastructure is nowhere near ready for the next big event.

posted 2 years ago
This is an important topic for me because we live in a region of historically dramatic rain events and catastrophic flooding and our land is the drainage for hundreds of acres upstream which are not improving their water-holding capacity.  We are working to mitigate flooding through the two seasonal creeks that meet on our land plus a culvert from the neighbors' land across the road that empties above our driveway.  Our goal is to eventually prevent the flooding which has taken out our driveway three times and peeled the asphalt off the county road.

Some of our efforts: