Posts: 2040
Location: Grand Valley of Colorado's Western Slope
188
posted 9 years ago
Can Iput an untreated post in the ground and it won't rot, if it is insied a cob building with drains around the perimeter to keep the moisture out?

Joe Netzl
Posts: 5
posted 9 years ago
If you keep the post dry it won't rot. Moisture can move through soil though, sideways and upways, even if you have drains some could probably still get around to your post. An untreated cedar or black locust post would surely last a while. If you wanted to use a easy to rot piece of wood maybe it could be coated or charred or something like that?
Another question you could consider, will it be replaceable in the event that it does rot or is eaten by termites?
Also, could you build a barrier for the post that could break up capillary action - like setting it in gravel or something more complex.
Thekla McDaniels
gardener

Posts: 2040
Location: Grand Valley of Colorado's Western Slope
188
posted 9 years ago
thank you.  I do have gravel, but I was not sure I could use it to set the post.  what would I do, just tamp it, tamp it, tamp it?  I have been told I could use concrete, but doesn't that allow moisture through?

Or, if I used road base, which would pack very well, would the fines provide the capillarity I'm trying to prevent?  If road base is no good, then should I get a couple sizes of gravel, say down to pea gravel, and mix them together, or ask the people at the rock plant for something minus the fines?

Thanks again for your help

Mark Vander Meer
Posts: 75
posted 9 years ago
Somewhere on this website there is an in-depth discussion on what some call “embedded wood posts”.  Personally,  I would never bury wood in the soil – it will rot.  It doesn’t matter how you treat it, or wrap it or cement it.  In addition, there is usually no need to put a post in the ground, if the building is built right.  I have built many buildings in remote settings on simple piers.  Here is one we did last month, the other we did last winter.
Forge-Swan-Valley.JPG 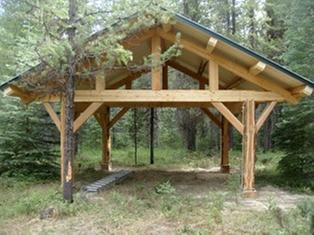 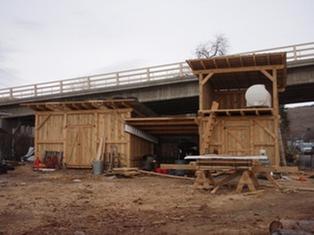 Posts: 2040
Location: Grand Valley of Colorado's Western Slope
188
posted 9 years ago
Thanks, Mark, and a pier is concrete poured in the ground?  I guess I can search the forums data base (I'm only a week here) and also check for placing piers.

Mark Vander Meer
Posts: 75
posted 9 years ago
Piers for the forge were poured, the piers for the mill sheds were purchased and set on the ground.  These traditional timberframed structures can take a bit of movement.
Dale Hodgins
Posts: 9002
Location: Victoria British Columbia-Canada
676
posted 9 years ago
Set them in rubble     This relates to fencing more than too setting building posts although I would be comfortable using cedar or Locust within a building envelope using this method provided that there is good drainage year round.

Fence posts typically rot away just below the surface of the soil. This is the most rich and biologically active layer.

No matter what species of wood you use you'll get more life from your posts if you fill the hole with rubble rock rather than with soil. Igneous rocks like granite are better than sandstone or limestone because igneous rock doesn't wick moisture. Put a few good-sized chunks in the bottom of the hole then prop your post up perfectly and fill it to the top with rubble. Your post will be suspended in relatively dry conditions unless you have an extremely high water table.

This method of post instalation has another added benefit. It creates a perfect home for some lizards, snakes and other beneficial ground dwellers who enjoy a well drained spot out of the sun. I have garter snakes and alligators lizards who enjoy this environment. If your land doesn't contain much rock your posts will still last longer if you put gravel around just the top 3 inches or so of soil.

Derek Brewer
Posts: 118
Location: Hatfield, PA
2
posted 9 years ago
How long do you want the building to last? Cedar should get you 20-25 years in the ground. If you want longer, don't put it in the ground. Even pressure treated wood will rot eventually. The PT stuff I had in my cabin was probably well over 80 years old before it gave out this summer. I replaced it with more pressure treated lumber raised off the ground by gravel and field stone. Should last another 100 years... ::knocks on wood::

In general, I wouldn't build any structure to last less than 100 years and as such would never use post buried in the ground, because putting that much effort into something that will last less just seems a waste to me. However, that is my building philosophy. Everyone's is different. Pole building, the type your talking about, is usually cheap but has a shorter life. By simply digging/pouring piers your project will last much longer.

But for a cob building... I don't know how you'd do non-traditional foundations for that. Probably stone/rubble would be best. I definitely wouldn't go with wood due to the sheer mass of the cob and the moisture issues.

Edited to add: http://weblife.org/cob/ <- Great link for cob construction. There is a section on foundations.
Thekla McDaniels
gardener

Posts: 2040
Location: Grand Valley of Colorado's Western Slope
188
posted 9 years ago
I haven't been clear aobut what I'm building,. because it is so hard to describe.  I will give it a try...

I have an existing chicken house.  Conventional wood frame.  It has a shed roof which slopes (down) to the north.

I just want to be sure that the posts are big enough for the load.  Spaced close enough.  The distance from the chicken house to the inside of the cob wall is 12 feet.  I am planning to have a 2x6 extend from 2 feet beyond the exterior of the cob wall, across the 12 feet span, and along the ends of the rafters of the existing chicken house wall.  Where the 2x6 is spanning the 12 feet, I intend to splice on additional 2x6 to have it in essence a 4x6 beam.  And I was thinking of either3 or 4 posts, one a foot from each end and one or two in the middle.  In addition to carrying the load, my worries  have to do with keeping those posts fixed in all three planes.  They are pretty well anchored in place at the top by the rafters and crossing over the wall (linked to embedded dead man), but at the bottom, I don't want there to be enough wiggle that anything could happen.

I only know enough about engineering to know what to worry about, not enough to know what is enough and what is over building.

I think pouring piers could easily stabilize the bottom ends of the posts.  But, what size piers?

It's never ending, or so it seems, until finally I say, OK, I know what to do.

Thanks for the help