Repel raccoons with peppermint?
Killing a coon does nothing to deter others. They walk over the dead bodies of their buddies to get to food. There is nothing wrong with eating them, it's the best possible thing you can do, in my humble opinion.
Don't wipe them out, but there are more there than you know about, don't be afraid to trap quite a few. Cook whole in crock pot or grind into burger.
Find my YouTube channel if you want to see how real trapping is done.
show more
3 years ago
predators 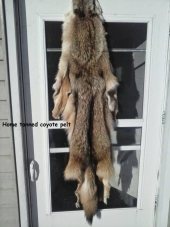 Tanning coyote hides - special considerations?
Don't worry too much about the coyote population, people have been shooting, trapping, and poisoning them for decades and they still spread all over the country. They are very phobic, and very smart.
If you have a meat grinder you can grind them into burger if you want to. I have a video of that on my channel. The taste is the same as pretty much any other home ground burger.
I have some fox hides but I don't really have anything to do with them unless I just wait til next year and send them to auction, I don't really want to tan them because I wouldn't do anything with the pelt.
The pelts down here in the south are not worth much, I trap just for the meat and to keep the number of coons under control.
show more
3 years ago
leathercraft 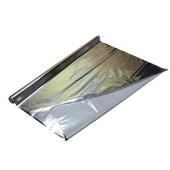 How can I *quickly* create some shade! ( Shade creating plants? )
Banana plants can do it in two years, muscadine vines in three or so. Luffa and cucuzza grow fast enough to give ya some shade til then.
As for trees, the fastest thing I've planted in the last couple of years is Ash. I have a two yr old that is now at 8 ft, very straight with no limbs yet.
show more
3 years ago
urban

Fruit Trees from Seed
Skillcult:
show more
4 years ago
trees
Grievously injured racoon
It's odd that we trap, kill, and eat adult animals (I like coon) but go out of our way to save young ones.
I've done it myself.
show more
4 years ago
critter care
Backflow Prevention from Yard Hydrants and Cattle Waterers
You didn't say what size line, or what it's made of. If it's only something like 3/4" PEX you can install one of these deep in the ground. Just remember that one day it'll go bad and you'll be digging it up.
http://amzn.to/2dycsni

Personally, I'd do without, and I'm a plumber.
show more
4 years ago
plumbing

All right, I admit it - I've never had a pocket knife...
The Buck 110: http://amzn.to/2cT82Kk
Maybe too big for girly men, but I use it for just about eveything.
I usually keep an Opinel in front pocket just for peeling fruit,
the Buck is mostly for work and peeling animals.
Ain't no reason to carry just one knife.

show more
4 years ago
gear
Cultivars for the Southeast

John Wolfram wrote:[Have you had good luck with the stuff from Willis Orchard?

Oddly enough, I've never had a problem with anything from them. I've read the bad reviews, but by the time I found the reviews I had already ordered. Only thing I remember dying was a Picholine olive, but it made it two years and I think it's death was due to a brutal winter unlike anything we normally get down here. I didn't order from Willis last year, but planning to spend about $200 or so with them this year. Really want a couple more varieties of banana, some cherries, Persian mulberry, and some different apple and pears.
show more
5 years ago
trees

Dave Dahlsrud wrote:Oh I see you're in Alabama, do you know if the chestnuts you picked up were Chinese or a hybrid, perhaps that makes a difference.

Looked Chinese to me. They were fresh. Had just fallen. Only found a few, the trees are young. I've done the same thing with black walnuts. Get about 50% germination from them.
show more
5 years ago
fruit trees