Broken links / forums moved??
I got that, too. However, I noticed that it loaded fine in Firefox whereas I got that error message in Chrome, which is the browser I normally use. Weird. I was going through withdrawals without my daily permies fix!
show more
8 years ago
tinkering with this site
govt allows non organics on organic list

Lloyd George wrote:I don't worry about the buzzwords...I farm..call it what you will, I will still farm...I am not trying to make a buck off of it...just feed my family, and whoever else it strikes my fancy to feed. 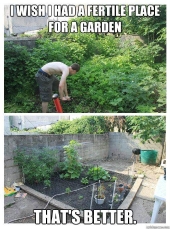 First world backyard gardener problems
Chris, I understand what you're saying as well, but you're making the assumption that this person is done with his renovation. Maybe he's brand new to gardening in general and is excited but doesn't really know where or how to start - his first thought is, "I need a blank slate!" Maybe the landlord is letting him use the space on the condition that he clean it up. Maybe he saved all that biomass out of frame and is struggling to figure out what to do with it. Who knows? I'm not trying to be argumentative, but I just think that coming down on someone for trying to make their space better (to them), especially when it comes to growing food, is counter-productive to relaying the message of permaculture in general. Everything is an experiment because everyone is dealing with different growing conditions - it is an ongoing learning process to figure out what works best in one's given situation. This young man will likely discover the heat issues you mentioned, and as a result, strive to learn more about gardening and maybe even permaculture approaches. Anyone that is actively trying to know their food more intimately, via permaculture or not, is doing something good in my book.
show more
8 years ago
meaningless drivel

First world backyard gardener problems
I think that's a little unfair. The concrete appears old and was probably canopied by all the other foliage growing in from the sides and the one dirt spot that he now has cleared. In order to make use of the concreted area without tearing it all up, he would have to first clear the area and figure out how to implement some sort growing medium, whether it be in containers, deep raised beds, or whatever. Perhaps the "new garden" is the only area that wasn't blanketed in concrete. It appears to be an urban area with limited space. I can't tell whether any of the existing plants were edible, but at least he's trying to still grow food.
show more
8 years ago
meaningless drivel
High Protein Perennials

Brenda Groth wrote:thanks for the encouragement..I have planted hundreds of trees ..I try to plant 20 or 30 every year on our property..and a lot of them will likely never fruit in my lifetime (61 now) however..if I live to be over 100 I should get some food from them (if I still have enough teeth to eat nuts, right now I still have a full head of teeth)

Dang! 20 or 30 every year? That's impressive! Do you have a master plan of sorts or do you just kinda wing it as you go? Do you prune them all or just let them grow wild?
show more
8 years ago
plants

John Polk wrote:Though many users here are opposed to tilling, one of those mini tillers, such as the Mantis can be very handy. If you ever need to run underground plumbing or elect to a shop, barn, coop or raised bed, they will save you hours of hand digging a trench, especially in heavy clay soils. Also, if you have just had the plot surveyed, run it from stake to stake, and you will have just created a semi-permanent boundary marker line, which will be particularly helpful if you plan on building a living fence as your perimeter fence.

[Disclaimer: this paragraph is my humble opinion...others may/will disagree]
Tilling repeatedly is very harmful, but doing it once on virgin soil, should create a richer tilth that will only get better as time marches on.
They are useful for breaking new ground. For double digging, make one pass, and then shovel all of the loose dirt out. Then fill (or half fill) the hole with compost or green manure (a half-half mixture is probably best...provides both humus and food!). Now make your second pass, (to incorporate the amendments into your subsoil,) then shovel your original, amended soil back on top. The billions of soil creatures that were killed in the process will more than be replaced. The survivors, now in a better environment should more than double the previous population within a season. You have now created a better environment for them. You will have life in your subsoil, which creates a healthier top soil (and will itself become part of your topsoil in a season or two).

That's very interesting, John Polk. I, too, thought that all forms of tilling were a permie no-no, but you provide what seems to be a good argument for doing it just once. For our future gardens at our land, I was just planning to lay down a cardboard kill mulch on the sod this summer/fall, bring in plenty of local mushroom compost to form borderless raised beds, let it mellow over the winter, and then start our first spring garden (I've used this method of letting the compost mellow over winter before, and it worked great). I think this is the fastest way to get up and running quickly (though probably not the cheapest), but it's good to know that your method could be used for future expansion.
show more
8 years ago
homestead

homesteading tools
Interesting! We already have a few of these tools, so that's a start.

We're thinking of getting two smaller chest freezers instead of one big one in order to be able to move them inside during winter for additional heat as well as not waste electricity if we don't have enough to fill a larger one for some part of the year.

I would not have thought of the carboys -- but I definitely want to make different wine varieties.

Thanks, y'all!
show more
8 years ago
homestead
a few photos of some food forest areas around my property
Wow, that is really beautiful! In terms of where your plants have come from, have you mostly purchased them (and then divided them if perennials), started from seed, or been gifted plants from neighbor gardens? My garden is a mixture of store-bought plants and cuttings/divisions pilfered from neighbors (with permission of course) that I know will grow great since the conditions are essentially the same, but it's nowhere near the size/extent of yours. Your grounds seem somewhat wild but in an organized and tidy kind of way. I don't see one bare patch of dirt. Do you mulch? Are some of the garden areas in mounds? Do you irrigate or just let things fend for themselves?
show more
8 years ago
projects

homesteading tools
I'd like to know what tools you cannot live without on your homestead and what you use them for. Also, what tools do you regret purchasing and why? Not limited to just gardening - anything homestead-related really - and doesn't have to be a manual tool... could also be in the form of living creatures, such as draft horses, mules, LGDs... and could also be tools not used in their traditional sense.

This subject might be a little too broad, but I know we're going to need to purchase some tools we don't already have once we get out to our homestead, so in order to increase the odds of making wise purchasing decisions, I'd like to hear what has worked well for other people and what hasn't.
show more
8 years ago
homestead
example of 'all natural' lawn in South Carolina
Ha, thanks! It's kind of a mind dump of sorts.

That is very interesting that you don't bring in any outside mulch. Do you only have grass clippings to use? How much area are you able to harvest in clippings? I was planning on mulching primarily with (bought) straw since it's cheap and abundant near our homestead, but maybe I should consider tackling our grownup pasture area as a source instead.
show more
8 years ago
lawn