Rectangular tubing question
Dear lord, I can't seem to link that image if my life depended on it. 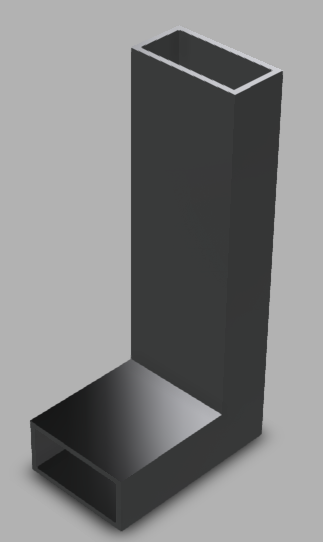 Glenn Herbert wrote:
What purpose do you intend for this stove? It is pretty small for more than direct heating of one pot.

Here's an image.  I'm not sure why that link won't work.  As soon as I try to use it, it's like my file disappears and I have to recreate the link.

I think the riser will be about the right height ratio according to what you're saying.  I didn't really explain everything very well.

As for the baffles, point taken.

As for the L tube combustion feeding backwards, I was thinking about creating a J tube configuration with a wood "cage" so it can be self feeding without creating a chimney on the wrong side.  I've also seen a very elegant solution which is to put a heatsink on the feed side of the combustion chamber so there is a definite cooling on one side and a direction for the heat and smoke to go.  I can see why a cobb stove would eventually uniformly heat up and then cause a backdraft.  I believe the heatsink should resolve this.

Insulating the chimney will also help with this.  It's not in the drawing because I'm not good enough at Fusion yet.

The purpose of this stove is for cooking.  I live in an apartment, and I'm hoping to be able to cook with a small amount of resources and without heating up our place in the summer.

I'm hoping to make a stove which burns efficiently enough, that I won't get complaints from my neighbors.

I'm guessing that a rocket stove will burn more efficiently than a charcoal stove for instance. I also want to be better prepared for power outages.

show more
4 years ago
rocket stoves
Rectangular tubing question
I have some 5" x 2.5" with .25" wall tubing.

I'm planning on building a rocket stove with it very shortly.  And when I say very shortly, I mean all the parts are cut, cleaned and ready to be welded, but before I do that, I thought I should ask here.

I've never seen anyone use this configuration of tubing.  Has anyone had success or failures with it?

My current configuration is about a 14" riser with a 45 cut on the bottom and a 8" feed tube.

I'm also thinking I can either drill holes beside the combustion chamber and put a baffle there to regulate air and/or I can run the air up the side instead of underneath.  I'm leaning towards having the air feed come up the side.

How to survive the year without a summer
By the way, theres a new movie out called "into the forest" with Ellen Page, who is recently a fellow permie.

It is not a feel good movie, it gets super hella dark, so please don't think you're going into a nice permie movie if you watch it. I haven't because I'm pretty sure I know mostly everything that happens on the dark side and I don't really want to learn anything new.

Anyway, that just popped into my head as I flipped on my apple TV and saw that come up.

How to survive the year without a summer
Disclaimer: there are people reading this forum who are WAY more knowledgable about literally everything I'm talking about in here. This is just my perspective which I'm always willing to admit is wrong if proven so. Also any of these hypotheticals go down the drain the moment you have to flee due to violence, fires, hurricanes, lack of resources, etc. The honest truth about who survives a near extinction level event like that is it all comes down to who is consistently at the right place at the right time.

I'm glad I read this thread. I never knew there were years without summer in recent years.

I've never considered that, but it seems with Mt St Hellen's and the volcano in Iceland both happening in my lifetime, it's something I should consider.

My main strategy would be stockpiling foods with a very long stable shelf life (beans and rice mainly) preferably hitching my bets and doing it in multiple locations spread out geographically.

Not to be a defeatist, but I don't honestly think my chances of survival are very good. I don't think most of the people who live around me have very good chances either. I live in an apartment in the middle of a large city in a largely populated area. If we're talking about half the population disappearing, we're talking about breakdowns of governments, increase of violence, gangs, mobs, etc.  My main goal would be to get the hell out of dodge until things settle down a bit more. This is where i see farming communities thriving because they tend to work very well together.

One thing to consider is that oil pumps and logging companies work the most in the winter, so expect a likely increase in production in that case. However, once the food stores start to fail, and that will happen very quickly due to "lean" manufacturing. I could see research and development and production go hard core into hydroponics, petrochemical fertilizers and indoor farming. I would also expect that Monsanto couldn't resist the gleaming opportunity to claim IP ownership of everything that grows, but I honestly think that by that time, so much would have happened in the world that the general population is no longer willing to take orders from a group of rich people who have a lot of juicy resources.

The question though was how would we deal as permies? My number one goal would be to educate as many people about survival skills as possible. I've focused a lot of my life toward learning skills like making cordage, pottery, alcohol, herbal medicinals, western medicine, preserving, weaving, knitting, waterproofing, hiking, hunting, carving, etc. General bushcraft and primitive living things. I'm also doing a lot of research on electrical circuits, programming, lab sciences, etc. I'm trying to learn how to live like a modern primitive and teach my wife everything I know.

So I have to say education is number one because what good is anything if we don't know how to use it? 98.6 degrees would be a great place to start, but you need to understand how things work on a systemic level. Studying systems thinking is an invaluable starting point. I honestly think some permies have the best shot of anyone alive today. There are so many man powered, animal powered appropriate technologies in use right now, I think permies will be the wizards of the new world.

Number one and a half would be stockpile food and supplies (nails, screws, saw blades, files, electrical wire, scrap metal, cutlery, plastic metal and glass containers, fabrics of many types, etc) general hoarder stuff. People used to burn down their houses to collect the nails when they moved. That should give some context to how valuable those things will be in a situation like this.

Number two would be community building and studying groups which have lived peacefully in primitive times and using their methods of conflict resolution, but generally forming groups whose chosen ethics are based on permaculture principals, while not forgoing whatever means of production or defence are attainable since we are literally talking about not only surviving the winter, but then rebuilding afterward.

Although community building is third on the list, I think it's the most important, because we can't survive on our own. Mountain men who were better suited for survival than anyone alive today only lived to about 40 at most because their lives were so stressful as well as occupational hazards of no safety standards while alone in the open wilderness for an extended amount of time.
show more
4 years ago
survival
Could anyone help me figure out my ad-sense account?
I've been working on this for weeks and I think I've finally found the issue.

If your transit number is only 3 characters, they want you to enter a 0 first so it comes out to 4 characters.

I read this here. https://support.google.com/adsense/answer/1208358
show more
5 years ago
farm income
Could anyone help me figure out my ad-sense account?
I have no idea where to post this, but I'm from Canada and I have a YouTube channel which has ad-sense turned on and has for a couple years now.

Google owes me some cash and I'm trying to figure out how to get it, but every time I try to set up my bank account and get it verified, it doesn't send me the verification test amount ever.

I've tried this many times and still can't get it to work.

Has anyone else had this type of issue? I'm finding the Google help pages to be no help, so I thought I'd ask here because I figured there would be someone who might know.
show more
5 years ago
farm income

Author is unimpressed by permaculturalist views of 'invasive' plants
I like the way Toby puts it.

Cassie's Weekly Permies.com Video Blog Updates!
I would love to see a tour of the lab. I would really like to see the context of everything too, like where things are in relation to other things. It just gives some understanding when I read about the wofati and the teepee and the kitchen as to where they are in relation to each other. I think someone posted a map at some point, but walking around with a video kind of brings us there.

I'd also love to see a video tour of things in detail, like the wofati and the teepee and the kitchen

Honestly, you could have a decent following on youtube (not that that's necessarily your goal with this, but it can't hurt) just walking around filming what people are doing and showing the improvements of the site. Talking heads are great too, but some context around what you're talking about goes much further.

EDIT 2: Sorry, just read your response above.
show more
6 years ago
tinkering with this site